Those who plan to get up early and attend Easter sunrise service this Sunday morning have an additional challenge facing them.  It’s time to switch to daylight saving time, which means you must turn your clocks forward one hour.

Her title is “receptionist” but Carolyn Blatz’ job at the Ava Ranger Station includes much more than just answering the phone or greeting people.  Carolyn is the first person you meet when you walk in the door.

Ava kindergarten students planted a tree on their playground last Wednesday in memory of classmate, Kasey Eaves. The tulip popular tree was donated to the class, and Paul Hart donated his backhoe to dig the hole for the tree.

ALMARTHA –– Doy and Imogene Price of Ava called on Hettie Cooper. They also called on Sylvia Terry at Gainesville.

In celebration of 45 years of marriage, Mona and Conley Welch will be honored at a reception Saturday, April 2.

MEADOWBROOK MANOR – We are proud of two of our nurses, Carla Corder and Jane Buchanan, who passed their state boards and are now registered nurses. 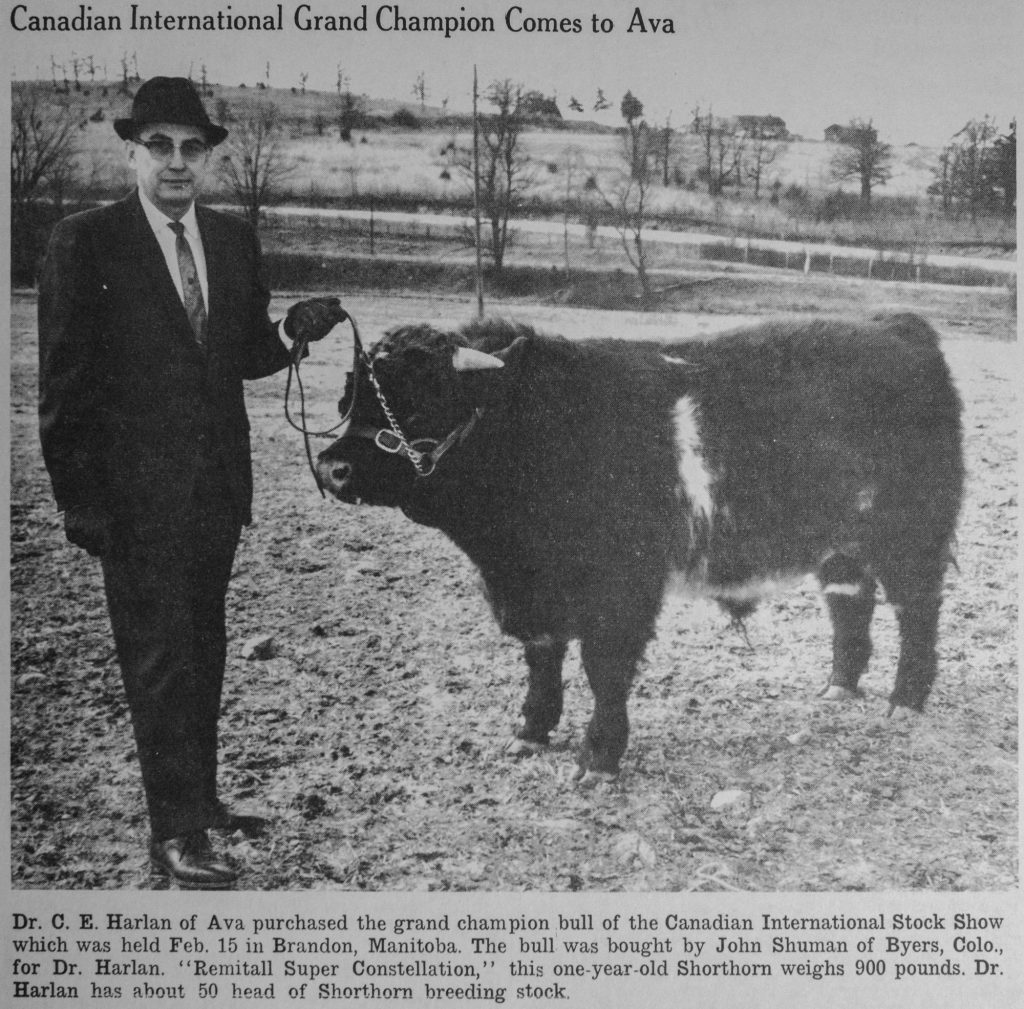 Voters in the Ava R-I School district will have a choice of three candidates on Tuesday, for the two three-year positions on the board of education.  Seeking the two seats on the board are incumbents Clifford Robertson and Dean Davis, and Lou Prince who is seeking his first term in public office.

Stanley Taylor, 21, a native of West Plains, has been named manager of the Ava Hardware Co., by Ralph Padget, owner.  Don Victor who has been manager of the firm since its purchase by Mr. Padget from E.L. Yeoman, has resigned the position.

William Lee Cochran, charged in Douglas County with grand stealing in connection with the Squires Store and Post Office robbery on March 13, 1968, was sentenced to five years in the Missouri State Penitentiary Tuesday after a trial in Christian County on a change of venue.

Lance Corporal Henry Longston, 21, son of Ralph Longston of Ava, was killed in action in Vietnam Saturday, his father has been notified.  The Ava Marine, who elected to serve six more months in Vietnam after becoming eligible for returning home, died in Quang Ngai province, Republic of Vietnam, after suffering missile wounds to the body from a hostile explosive device while on patrol. 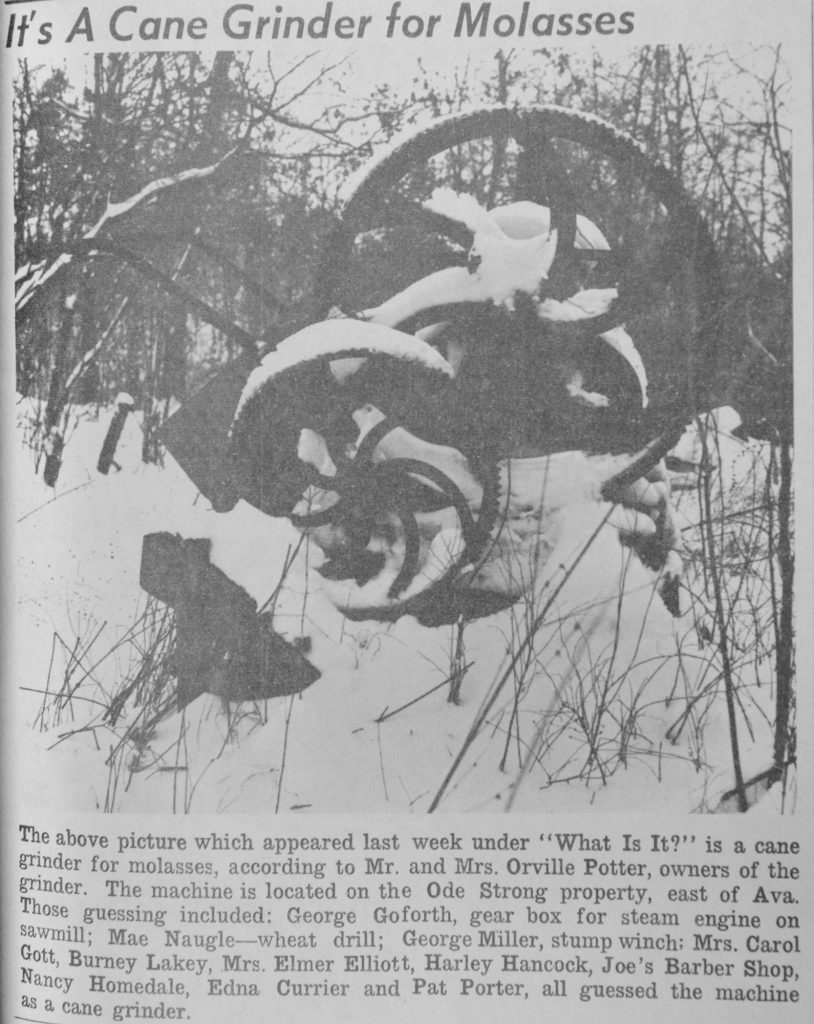 Late TV viewers in Ava Friday night may have been surprised to see Wilson McClendon of Garland, Texas, son of Mrs. Lena McClendon of Ava, sitting in the New York audience of the Johnny Carson Show.

Jim Huffman, Ava High School junior was awarded a “one” rating for his physics display at the SCA Science Fair, “The Hall Effect and Its Applications.”

Ava High School sophomores Sue Curry and Debbie Farris had the top-prize winning display at the South Central Association Science Fair held March 8 in Houston, along with the medal judges awarding them for “The Effects of Antiseptics on Bacterial Growth,” best biology entry in the area competition.

Glen Peebles, Ava High School senior received a “two” rating for his demonstration, “The Nicotine Extractor” which he entered in the SCA Science Fair’s biology division.

Frank-Rhine Company of Carthage has started construction on a new building for Bank of Gainesville.

Plans are well under way for an extension of electric service from the Ava system to include rural sections north, east, south and west from the city.

“This too shall pass away.” Today with many liquor stores “closed for the duration” and others showing a wide expanse of empty shelves, it is amusing to read how the “born of plenty” was filled to overflowing with spirituous liquors back in the 1850s and earlier in Missouri.

“We’ll blast our way to what’s left of Berlin,” is the chant of a group of field artillerymen in England, among whom is Private Howard W. Reed, son of Mr. and Mrs. Austin Reed, formerly of Douglas County.

PLEASANT GREEN –– Delmar Brazeal received word from his brother, Bruce, that he is married.

Mrs. Julia Davis spent the weekend in Ava with her daughter, Mrs. Flora Young and Private Eddie Ridenour from California.

CHAMPION –– On account of measles only a few pupils enjoyed the picnic on the last day of school at Champion. The one getting a dollar for regular attendance were Janice Cooley, Landon Cooley and Esther Powell.  The one taking final eighth grade examination were Esther Powell, Jean Hutchinson, Hazel and Grace Hutchinson, Stanley Graham and Carl Leo Krider.

FOX CREEK –– Spring has taken another halt with threats of snow and cold weather.

MT. TABOR –– Roscoe Pryor, storekeeper first class of the U.S. Navy, left Friday to return to his post of duty in California after spending thirty days with his parents, Mr. and Mrs. Tommy Pryor, and family, and other relatives at Springfield and Carthage.  He has been in the Navy almost six years and this was his first furlough.

There would be fewer traffic accidents if all drivers displayed the same courtesy when driving as they do when entertaining guests in their homes.

Five cents Coca Colas, soda pops, etc., will soon be a thing of the past if the proposed soft drink tax goes into effect.  Even the drought arm or “goose neck” on fountains which furnish carbonated water for your drinks will be taxed $100 each per year under the plan.  Soda fountain owners and dealers in soft drinks will  be required to get a clear bill from the pure food administration that they are equipped to rinse all glasses in running water, and all bottles must be sterilized in hot water impregnated with at least four percent of caustic solution to be heated to 120 degrees Fahrenheit.

Patriotic citizens of Douglas County invested $158,891.25 in War Savings and Thrift Stamps during 1918 according to figures compiled by County chairman, A.H. Buchanan.   The report of Postmaster J.H. Orr to the War Savings Division of the Post Office Department at Washington shows that a total of $127,431.25 was paid in through the post offices of the county.

SCHOOL NOTES –– Sometime ago it was suggested that the name of the English Sparrow be changed to that of German Sparrow and a warfare waged against those pests. The children of the second grade have responded to the call by killing 172 of the destructive birds.

The agriculture class has been very busily engaged in making an ornamental concrete sun dial this week.  It is located on the front yard campus and will be very beautiful when finished.

FACTORY NOTES – We are busy unloading our 44-ton car load of 1-8-1 fertilizer.  On this car load the freight just from Mansfield to Ava was $110 and the U.S. revenue was $5.50 causing us to pay $115.50 for a 14-mile haul.  However this is only one-half what freighters would have charged to have hauled it in their wagons.   Howard Hitchock & Sons.

Sid Amyx, of Gainesville, Ford agent for Ozark County, had a car of Ford automobiles shipped to West Plains last week. He came over with several chauffeurs and they set up the cars and trucks. One of the trucks was for Morris Bros. Merchants of Bakersfield and two were for the West Plains – Gainesville mail route. Mr. Amyx took three cars and one truck to Gainesville.

The University of Missouri grounds of Columbia cover more than 800 acres.  The University also has a forest of 50,000 acres in the Ozark Mountains of Southern Missouri.  A 60-acre tact of land near Columbia is used for experimental work in horticulture. On a 90 acre tract, two miles north, the University has a plant for the manufacture of hog serum.

Citizens Shot Down in Trouble Over The South Carolina Liquor Law –– Martial law has been declared in Darlington and Florence, S.C., however, state militia refuses to obey the call of the Governor to put down the insurrection.  Four dead men and several others dangerously, if not fatally, wounded is the result of a battle between dispensary constables and citizens of Darlington, and the end is not yet.  Citizens are hunting the constabulary, the adjutant general is making desperate efforts to get soldiers to proceed to the scene of the battle, but without success.

Easter 1894 was remarkable in Missouri for wide observance and frightful cold.

In the number of its manufacturing establishments, Missouri is the sixth state in the Union.

Parker Cox, who acted as guide to General Lyon at the battle of Wilson Creek is living in Christian County.

The election laws of Missouri recently compiled by the Secretary of State make a book of over 124 pages.

A late Frisco passenger train leaving Carthage carried a tramp on the brake rods of each of the three coaches.

Cripple Creek, a thing of yesterday, is shipping $375,000 a month of gold right now without a railroad and ill output $7,000,000 during 1894.  It has 20 miles.  Two railroads are bing built to it as fast as men and money can rush them, and immense reduction works are about to be started.  Does anyone know of any other place in the United States for which railroads are racing just now?

An actress who has played for several years the part of an old and crooked woman in a play that has had an extended run is obliged to give up the role for a curious reason.  She finds that she is growing one-sided and has a pronounced stoop that does not vanish when she leaves the stage.

Let a young man smoke only the best cigars his best girl gives him and he will soon give up smoking.

The power of song is illustrated in a custom on the railroads of Northern Florida.  Whenever a train crossed the Suwannee River, the conductor performs the tune in each car.

It is reported in mining circles that an important strike of zinc ore has been made near Mansfield in Wright County, Mo.  The ore is said to be in a true fissure vein, like the silver mines of Colorado.  The vein has been traced for several miles.  Shafts have been sunk along this vein and a depth of 184 feet has been reached with the shaft still in ore. On the surface the vein is 20 inches wide, and gradually grows wider as the depth increases.