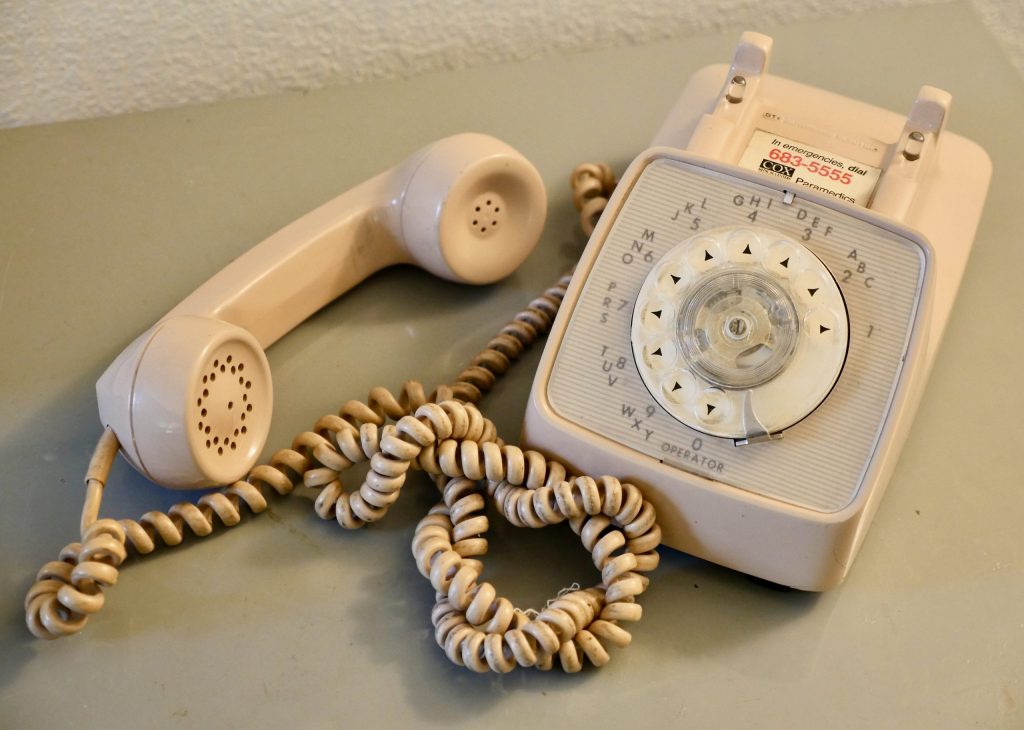 I wonder how many of your voices ever came from the handset of this rotary-dial phone found in the Herald offices. Michael Boyink/Herald

In January a Denver couple received a scam phone call from a man who told them he had kidnapped their daughter. The man was very convincing that their daughter was in his possession. In the background they heard a woman’s voice begging for help. The call was convincing enough that they tried to wire money to the man. Fortunately the money didn’t go through. Police soon showed up after the wife left a note with the bank teller explaining what was happening. The police determined it was a scam.

A 90 year old friend received a call a couple of years back. The caller explained that he was with the Internal Revenue Service. He alleged my friend was $40,000 behind in his federal taxes and that payment had to be made immediately. My friend didn’t owe anybody and had always been a model citizen. The worry and fear for this 90 year old man were more than he could handle. He committed suicide a few days after the call.

Several years ago I received a call after my son had boarded a submarine. I would not be able to communicate with him for several months. The caller in a very convincing voice stated my son owed $350 and if not paid immediately he would file charges against him that would be very negative toward his military career. I explained he would not be available for awhile. The caller insisted that someone needed to intervene to prevent the black mark against my son. You guessed it. I fell for it and paid the demanded money. Of course within a couple of hours and some research I knew I had been scammed.

Somehow, somewhere there is someone keeping an eye on soldier’s families that they can catch at a vulnerable moment and scam them.

When you are scammed you feel like an idiot when it’s over. It’s embarrassing. However, these telephone artists are professionals. This is all they do every day. In places like Nigeria where many of these calls originate from people go to work from 9 to 5 every day like you go to your daily job. Only, their daily job is to come up with real life convincing lies to scam you out of your hard earned money.

Some of us have only lost a few hundred dollars but others have lost thousands and in the case of my friend, he ended his life over a very believable telephone call.

I remember our first telephone. I was about nine years old. Telephone calls were cool. I talked to friends on the telephone for hours. When the telephone rang we knew it was family or friends calling and answering it was enjoyable and important. Today, a ringing telephone is a nuisance. Some days I receive five to ten calls from local numbers who end up being people selling health insurance, credit cards, student loan payoffs, car warranties, scams pertaining to taxes owed and numerous others.

Thus, I no longer answer the phone if I don’t recognize the number. Leave a message and I promise I’ll call you back. If the person calling you is real and legitimate they won’t mind leaving you a message and a real number to return the call.