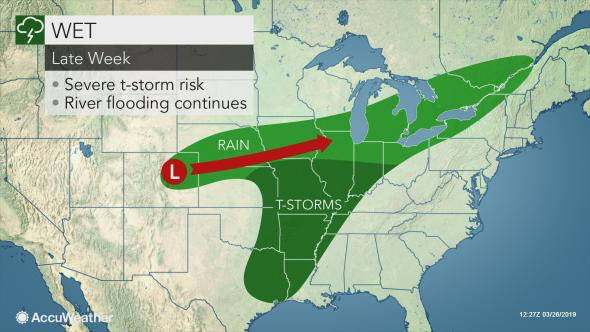 Submitted Image Enough rain may fall with the storm from the central Plains to part of the Midwest to aggravate the flooding situation.

A large storm will affect the flood-weary central United States and produce heavy rain and thunderstorms with localized severe weather.

While a storm of this magnitude is fairly typical of the spring, it will cause a new round to problems for residents and travelers in the region.

Enough rain may fall with the storm from the central Plains to part of the Midwest to aggravate the flooding situation.

A large swath of 1-3 inches of rain is likely to fall from central Nebraska and northeastern Kansas to northern Ohio and southern Michigan with the storm from Friday to Saturday. Locally higher amounts to 5 inches are likely.

“The bulk of the rain will fall south of the area where deep snow remains on the ground over the northern Plains and the Upper Midwest,” according to AccuWeather Lead Long-Range Meteorologist Paul Pastelok.

However, in these northern areas, flooding is unavoidable even with a gradual thaw and absence of heavy rain over the next several weeks.

Major flooding has begun along the Minnesota, Big Sioux and northern Mississippi rivers this week and is expected to continue into April. In addition, major flooding is forecast along the Red River of the North from April to May.