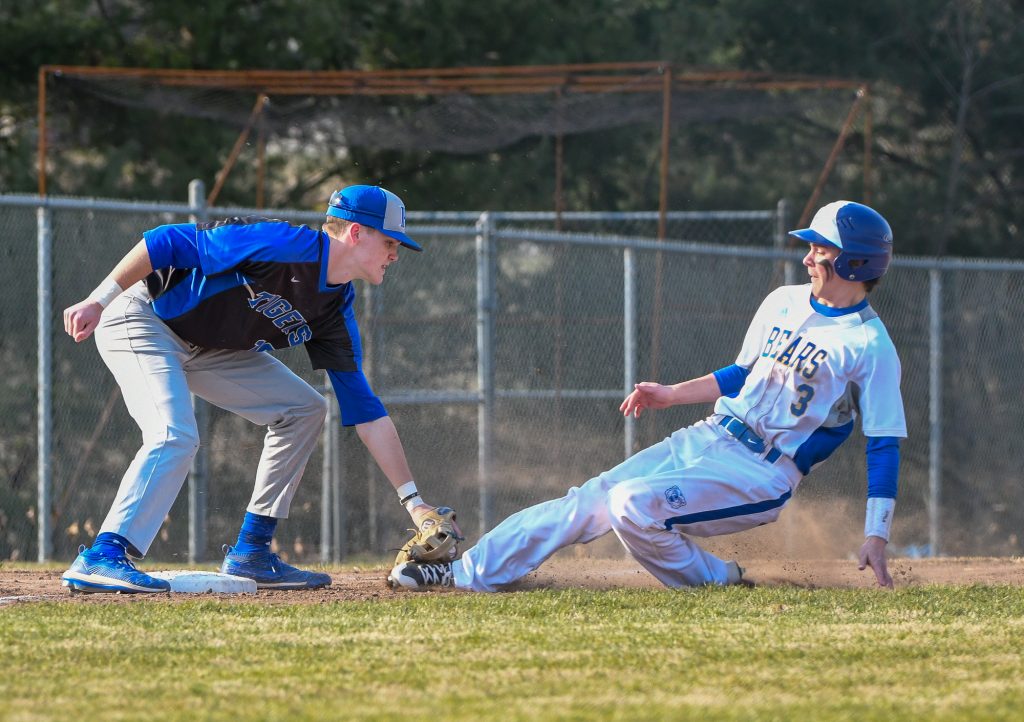 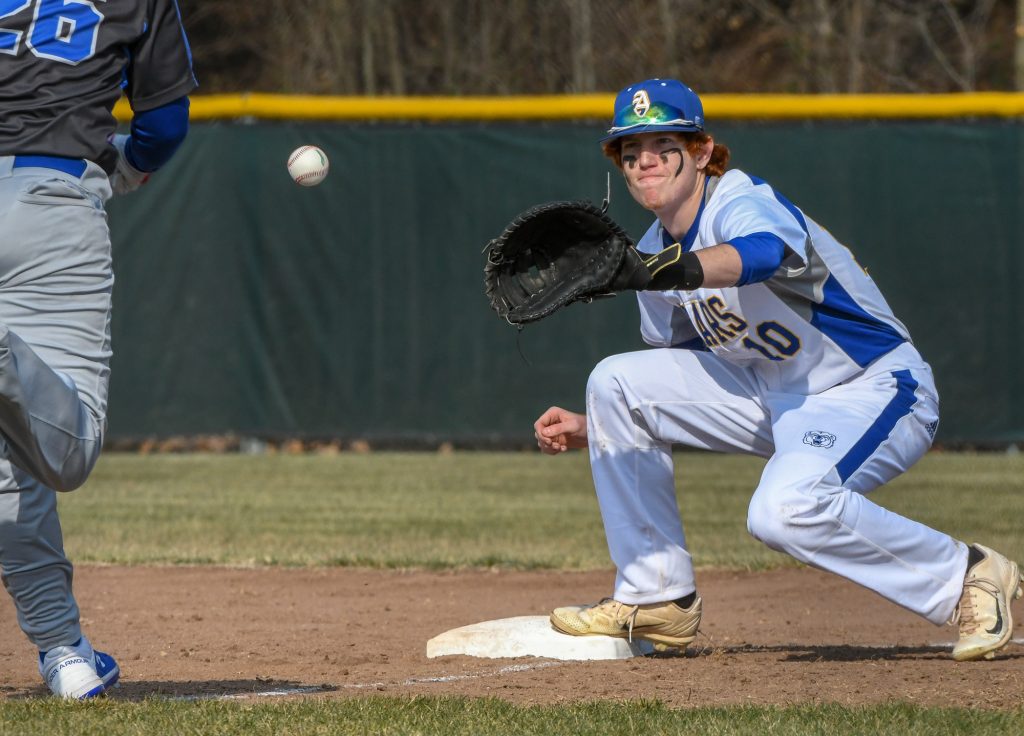 Tuesday at Kerr Field certainly was not the start coach Rex Sawyer was expecting after a win in the first round of the Cabool Tournament, but as he likes to say… there is a lot of baseball left.

Andrew Dalton had a great opening against Hollister with a 1-2-3 top of the first with a strikeout and another three-up, three-down in the second.

At the bottom of the first, the Bears came out swinging for two hits.

Tom Emerich, the lead-off batter was able to get on base after wearing a pitch to start the game off on the wrong foot for Hollister. A fly-out to second base by Spencer Skyles followed for the first down for Ava at the bottom of the first.

Caleb Johnson was third at the plate but swinging for the fences delivered a K to Hollister pitcher Avery Weber who pitched for just over four and one-half innings on Tuesday.

A hit by Zach Miller brought-in Emerich for the first run of the evening, Miller earning the RBI. Andrew Dalton followed, reaching first on balls but was later stranded by Kayden Myers on the third out, leaving two ducks on the pond.

Dalton’s 1-2-3 second inning had things looking good for the Bears with Emerich making a stand-up double for an RBI, bringing Carter Campbell in for a 2-0 lead for the Bears.

Zach Mendel was put-out at first on a bunt that had put Campbell in scoring position. Corey Heinlein flied-out to Hollister second baseman Colby Teaster and Emerich was caught advancing to third for the third out and a sharp turn of events for Ava.

In almost a poetic sense, the ball player that ended Ava’s second ending, started things off for the Tigers in a momentum grab that would eventually cost Ava the game.

Colby Teaster was first at the plate at the top of the third, making the sprint to first on a dropped third strike after the ball made it past Ava’s catcher, Caleb Johnson.

Things appeared salvageable after Josh Willis was put-out at first, but Hollister hitter Konner Hatfield made first on balls after a wild pitch, allowing Teaster to come home for the Tiger’s first run of the evening.

Top of the order, one on, and only one out; Logan Armitage followed-suit making first on balls and put Hatfield in position for the go-ahead run.

Cue Layton Morgan. The third baseman was able to smack the ball for a double, bringing Hatfield in and making the game 3-2 for the Tigers.

We just didn’t find the zone today,” said Sawyer. “I played a lot of different people just because I got a little bit aggravated.”

Dalton was pulled from the mound as his pitches started losing the strike-power they had in the first two innings. Carter Campbell was on the molehill.

A center-field fly ball marked the second out, but a hit by Landon Richards brought-in Morgan for a four-run inning for the Tigers before freshman Corey Heinlein made a leaping grab to end the inning.

“We just didn’t pull together as a team,” said coach Sawyer during the post-game interview. “We struggled a little bit there in the third inning and nobody picked one another up.”

At the bottom of the third, Hollister pitcher Avery Weber returned the favor Dalton dished out in the first and second innings.

1-2-3 bottom of the third for Ava, followed by another in the fourth ending with a strikeout for Zach Mendel.

Hollister put two runners on in the fifth, but they were stranded when Weber hit a fly ball to center field, caught by Skyles for the third out.

At the bottom of the fifth, Heinlein made contact but was thrown out at first on a 6-3 play by the Tiger defense.

Emerich made it back on base with his second hit of the game and was able to steal second as Hollister installed a new pitcher on the mound.

Layton Morgan took over at the one-spot and threw two strikeouts, getting Johnson on a full-count for the third out.

Teaster, in his fourth plate appearance, picked up the double and stole third in the sixth, but Campbell was done-for as coach Sawyer put-in Zach Richard who was able to pull two strikeouts, one a whiff and a save on an infield fly for the third out.

With Hollister leading 5-2, scoring four in the third and tacking-on another in the fourth, the Ava defense needed to put some Tigers away if they wanted a fighting chance to do what baseball does best… Comebacks and walk-offs.

With Emerich closing for the Bears, he picked up two earned runs on errors committed by the Ava defense mostly at missed opportunities at first. Morgan reached second on an error, a missed catch by first baseman Bryce Dotson, and was brought in on an RBI double by Garrett Moody. Moody was brought-in by Richards with a single on a 1-0 pitch. Stealing second with Jones at the plate, he would make the eighth run for the Tigers on an RBI single by Weber, who was the ninth and final run for the Hollister Tigers.

9-2 at the bottom of the seventh, the Ava Bears had their work cut-out for them. Campbell was first up but flied-out to the shortstop for out one.

Dotson made it to first on an error made by the Hollister first baseman and was able to make second while Heinlein was at-bat. A pinch-runner covered for Dotson and made it to third on a single by Heinlein.

TWO ON, TWO OUT

With two on, Ava was in a spot to close the run deficit a little, but it just didn’t work out like the Bears wanted it to.

Skyles flied-out to the Hollister shortstop who had enough time to make the catch and send the pearl over on a 6-4 double play to pick-off Emerich and end the game 9-2 for the Tigers after 2 hours and 26 minutes of play.

“You can’t blame any single kid,” said Sawyer. “It’s a team effort. When someone’s struggling a little bit, another has got to pick them up and we did not do that today. It wasn’t good Ava Bear baseball today. That’s all there was to it and we’ll get back after it tomorrow and hopefully regroup and come out.” 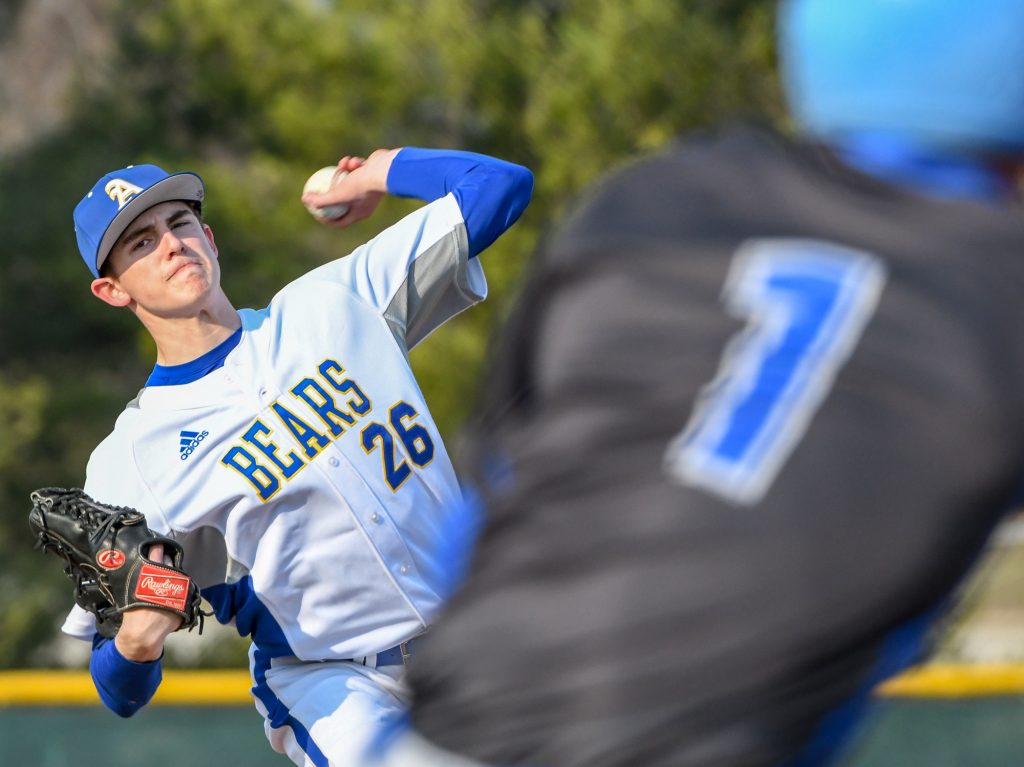