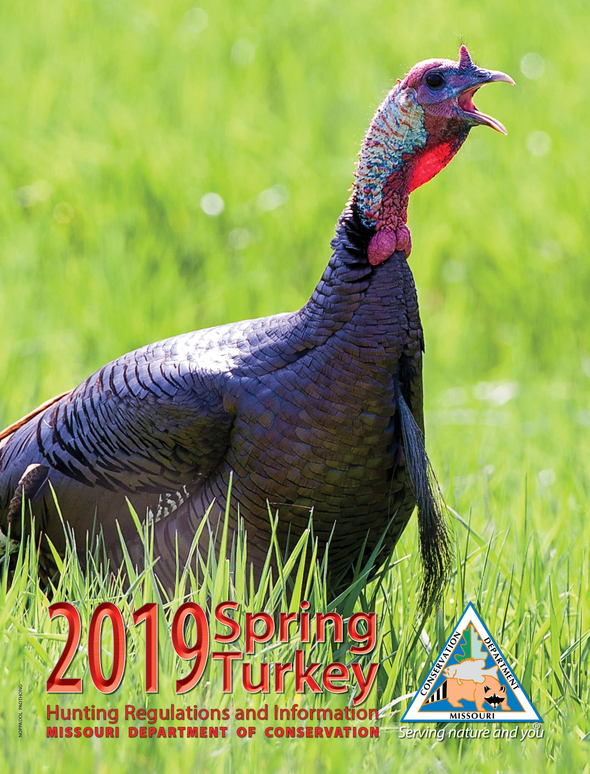 Poor production in recent years will make for a more challenging season.

JEFFERSON CITY, Mo. – Missouri turkey hunters can expect a challenging spring season according to the Missouri Department of Conservation (MDC). The spring turkey hunting season starts with a youth-only weekend April 6-7. The regular spring season runs April 15 through May 5.

Although the good hatches of 2011, 2012, and 2014 helped bolster turkey numbers in much of Missouri from a low point during the late 2000s, poor production in recent years will have an adverse effect on the 2019 spring turkey season.

“A great deal of what makes for a good spring turkey season depends on the hatch two years prior because it affects the number of two-year-old gobblers on the landscape,” MDC Turkey Biologist Jason Isabelle said. “These young gobblers are not associated with hens as often as older, dominate birds and are more likely to respond to hunters’ calls.”

Unfortunately, poor production throughout the state during 2017 will result in fewer two-year-old gobblers during this year’s spring hunting season. Isabelle added that poor production in 2016 and last year will also contribute to this year’s challenging conditions.

“We’ve had three years of very poor production,” said Isabelle. “When that happens, you’re going to see the effects on turkey harvest for several years until production and turkey numbers rebound.”

Considering the prospects for the 2019 spring season, hunters should be prepared to put in a bit more effort to be successful this year.

“When turkey numbers are down, it becomes even more important to do your homework,” said Isabelle. “Hunters should get out to their hunting areas as much as possible before the season to listen for birds gobbling at daybreak.”

Isabelle noted that it gives hunters an advantage to know where turkeys are spending most of their time after they fly down.

“Using binoculars to spot turkeys feeding in open areas or looking for signs of where turkeys have been feeding in the timber can help hunters be in the right area when the hunting season gets here,” he said.

Although the prospects for this year’s spring season aren’t encouraging, this isn’t the first time poor turkey production has reduced turkey numbers in Missouri. After reaching a population peak in the early-to-mid 2000s, Missouri’s turkey population experienced four years of poor production from 2007–2010, causing the population to decline. However, Isabelle noted that turkey numbers rebounded following several years of improved production.

“In much of the state, production rebounded in 2011, 2012, and 2014,” said Isabelle. “As a result, turkey numbers increased, and hunters generally had better hunting seasons in the years that followed. The variability of turkey production can result in wide fluctuations in turkey numbers.”

Get detailed information on spring turkey hunting from MDC’s 2019 Spring Turkey Hunting Regulations and Information booklet, available from MDC offices and nature centers, other places where permits are sold, and online at huntfish.mdc.mo.gov/spring-turkey-hunting-regulations-and-information.

Isabelle stressed that hunters can easily avoid the main cause of turkey-hunting incidents —mistaking or being mistaken by another hunter for wild game.

“Each year, most turkey hunting incidents typically involve hunters who fail to positively identify their targets,” said Isabelle. “Unless you are absolutely certain that what you’re looking at is a wild turkey, remember that any movement you see or any sounds you hear while you’re hunting could be another hunter.”

He also advised hunters to wear some hunter-orange clothing when moving through the woods or fields, particularly when hunting public land.

“Bringing along an orange hat is an easy way to stay safe”, said Isabelle. “Wear it when you’re moving and switch it for your camouflaged hat when you sit down to work a bird.”

“If you’re hunting with someone else and you split up, be certain you know where your hunting partner will be at all times,” he advised.

Hunters can share photos of their harvests through MDC’s Hunting Bragging Board by using #mdcbragboard when posting pictures to their social media accounts. Learn more at mdc.mo.gov/huntingbragboard.