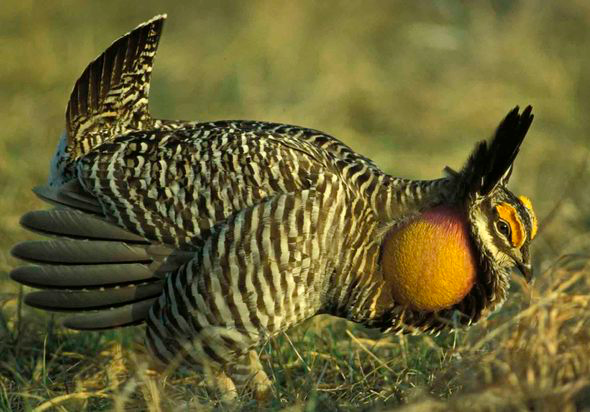 KANSAS CITY, Mo. – The Missouri Department of Conservation (MDC) reports that Missouri’s endangered prairie-chickens have dwindled to dangerously low numbers despite decades of conservation efforts. A bird once sustained on vast open grasslands now only has relatively small islands of usable habitat for nesting, feeding, and protection from predators and weather. That’s not enough for prairie-chickens, and perhaps for many other grassland species.

According to MDC, a notable historic prairie-chicken population at the Taberville Prairie Conservation Area in St. Clair County, north of El Dorado Springs, is close to extirpation, which means a species ceases to exist in a geographic area. Also, restoration efforts at the nearby Wah’ Kon-Tah Prairie, including releasing prairie-chickens trapped in Kansas, have not achieved a self-sustaining population.

Prairie-chickens trapped in Nebraska and released at Dunn Ranch in Harrison County in northwest Missouri, and in a neighboring Iowa County, between 2013-2017, are showing resiliency from a low of only 3 birds in 2012. That’s thanks to conservation partnerships between MDC, the Iowa Department of Natural Resources, private landowners, The Nature Conservancy, and other public agencies in the Grand River Grasslands in northwest Missouri. Long-term success depends on hard work in both states.

But still, biologists are not optimistic about the future in Missouri for a bird that’s an emblem of native grasslands, one as iconic as big bluestem grasses or pale purple coneflowers swaying in the wind.

“We’ve learned how to provide excellent habitat for prairie-chickens,” said Max Alleger, grassland biologist for MDC. “But there is still not enough of this habitat across Missouri.”

In 2018, MDC biologists counted only six males using the leks, or spring mating grounds, at Taberville Prairie, and only two were observed on a lek at Wah’ Kon-Tah. The count was 33 males at leks on or near The Nature Conservancy’s Dunn Ranch. Females are more difficult to count but their numbers are generally equal to males. Biologists will watch the leks again this spring.

Prairie-chickens, a member of the grouse family, are known for their spring mating rituals on leks, also called booming grounds. The “booming” comes from a sound males make as they puff out the orange pouches on their throats while stomping their feet and fanning their feathers in a dance to attract females.

Greater prairie-chickens are the species of grassland grouse native to Missouri. They numbered in the hundreds of thousands across open prairies as the 1800s began. A diverse mixture of grasses, wildflowers, and shrubs provided food and shelter. That habitat helped prairie-chickens survive and produce lots of young to overcome high mortality rates from predators, nest predation, and weather events.

But the prairies were converted to farms and towns. Less than one-tenth of one percent of the state’s original prairie remains. The remaining unplowed prairie parcels are small remnants, unconnected islands in a greatly changed landscape. Non-native pasture grasses such as smooth brome, timothy, and red top when interspersed with crop lands can also support prairie-chickens. Yet even those favorable grasslands are relatively scarce and scattered on Missouri’s landscape today.

Prairie-chickens have survived far beyond the elk and bison that also roamed and grazed on the state’s grasslands until the 1800s. Yet their decline has been steady. In the World War II era, estimates of the state’s prairie-chicken population ranged only from 5,000 to 13,000 birds in scattered flocks. By 1998, the tally was estimated at 1,000 birds. They dropped to 200 birds by 2006. Today, less than 100 remain and those birds are imperiled.

During the decline, prairie-chickens held on near prairie remnants. But those remnants became pockets of usable habitat for a bird that can sometimes range for several miles seeking food and shelter. With such a great distance between populations, there were no neighboring birds to replenish populations if a significant predator or weather event decimated a flock in a local grassland.

Impacts to Other Species

The ecological challenge is not limited to a high-profile species like prairie-chickens. Other species of grassland birds are also declining in alarming trends. Surveys show that even meadowlarks, oft-seen with their bright yellow breast feathers as they trill atop fence posts in summer, are declining in numbers.

MDC’s efforts to restore prairie-chickens and boost all grassland plant and animal species has been ongoing for decades. Those efforts intensified in recent years as prairie-chicken numbers dropped sharply. Birds were trapped in western states and released in core areas. Some released birds were outfitted with small transmitters so biologists could track their habitat preferences.

Research showed the varied mix of native grasses and wildflowers that prairie-chickens preferred for nesting, brood rearing, and over wintering. They like high ridges with grass low enough for them to see over but tall enough to hide then from predators. Variety in vegetation helps. They need heavier cover for nesting, more open areas for brood rearing, and the medium vegetation heights for feeding and resting. Plants that harbor insects and seeds they feed upon are essential. Controlled and limited grazing by livestock mimics buffalo and elk, providing variety in vegetation height and opening travel lanes.

Still, in the last two decades, several longtime flocks in north, west central, and southwest Missouri completely vanished from old strongholds. MDC has learned much about what land use practices help prairie-chickens, and what uses are detrimental. But the scope of good habitat establishment has not been large enough to stem declines. Biologists estimate at least a 10,000-acre core area is needed to sustain prairie chickens. The core area can include crops and cattle grazing pastures that are managed in ways not detrimental to prairie-chickens. But prairie- chickens would likely need to be trapped in western states and released once a decade to maintain genetic diversity in the core area.

Currently, there are no plans to conduct more trapping of prairie-chickens in the West and releasing them in Missouri unless sufficient habitat is there to sustain them.

MDC will continue to work with private landowners to restore functioning grassland ecosystems, regardless of the success or loss of prairie-chickens. Many other important prairie species remain to be preserved, such as the regal fritillary butterfly and the Mead’s milkweed wildflower. Healthy native and non-native grasslands benefit agriculture, fisheries, and wildlife.

For more information on prairie chickens in Missouri, go to mdc.mo.gov.