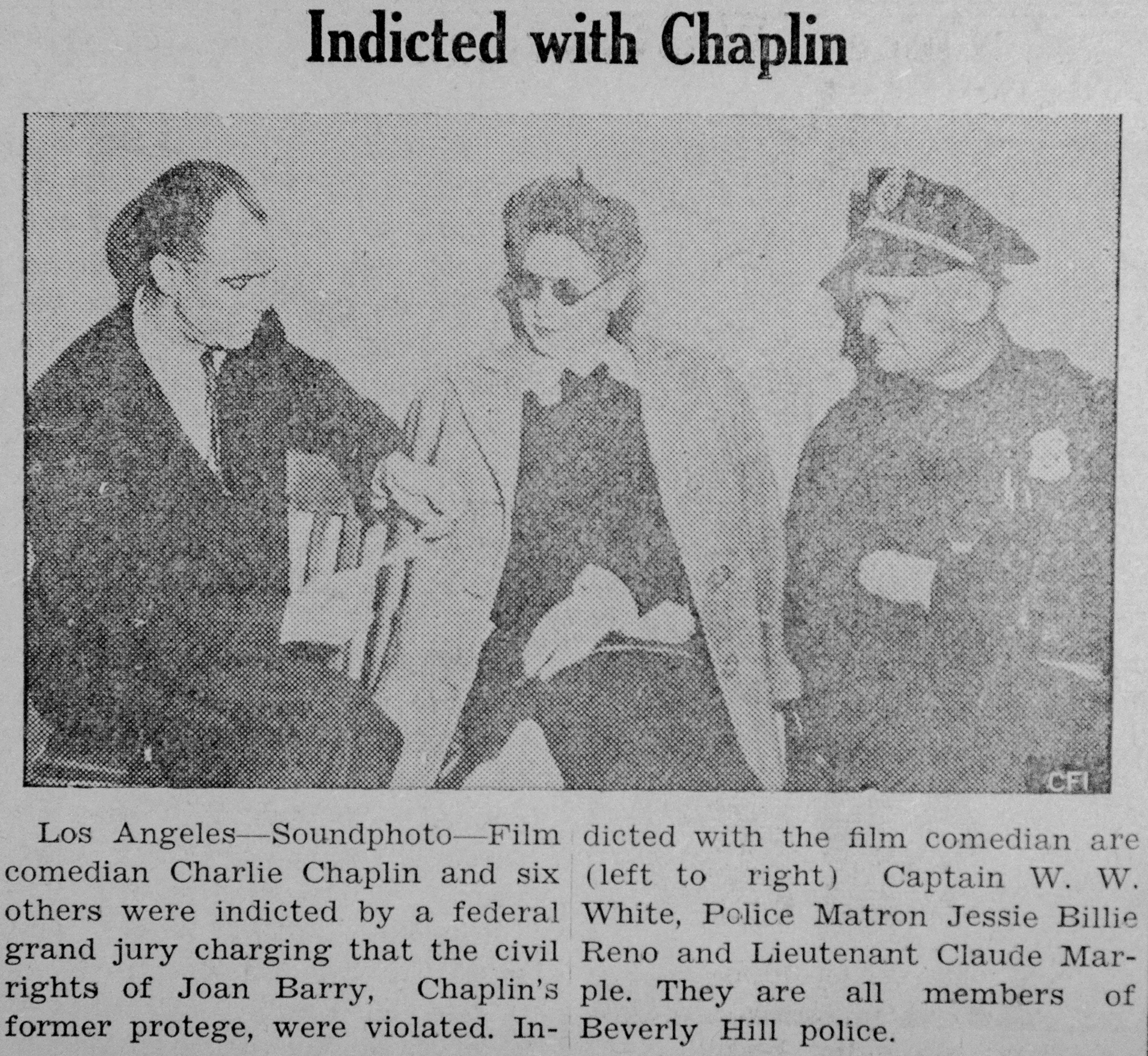 A major snow storm that moved slowly through the Ozarks Tuesday dumped the heaviest snowfall of the season on a region along the Missouri-Arkansas line. About a foot of snow was reported in the immediate Ava area, with accumulations increasing to the south.

The Central Methodist College Concert Band, under the direction of Keith House, will present a concert at Ava High School on Friday, March 18, at 12:43 p.m.

Ralph and Eula Price, Theodosia, Mo., will celebrate their 50th wedding anniversary March 19 with a family lunch at their son’s home in Mansfield, Mo.  Ralph Price and Eula Mahan were married March 21, at Pondfork, Mo.

The McDonald’s Ozark’s Co-op announced this week that on March 21 restaurants will become smoke-free.

Lee Frye and Chuck Burrow were married recently at the home of the bride’s sister, Freda Rhoads.  On Feb. 13, Marge Hazelton hosted a wedding shower in her lovely home for Mr. and Mrs. Burrow. 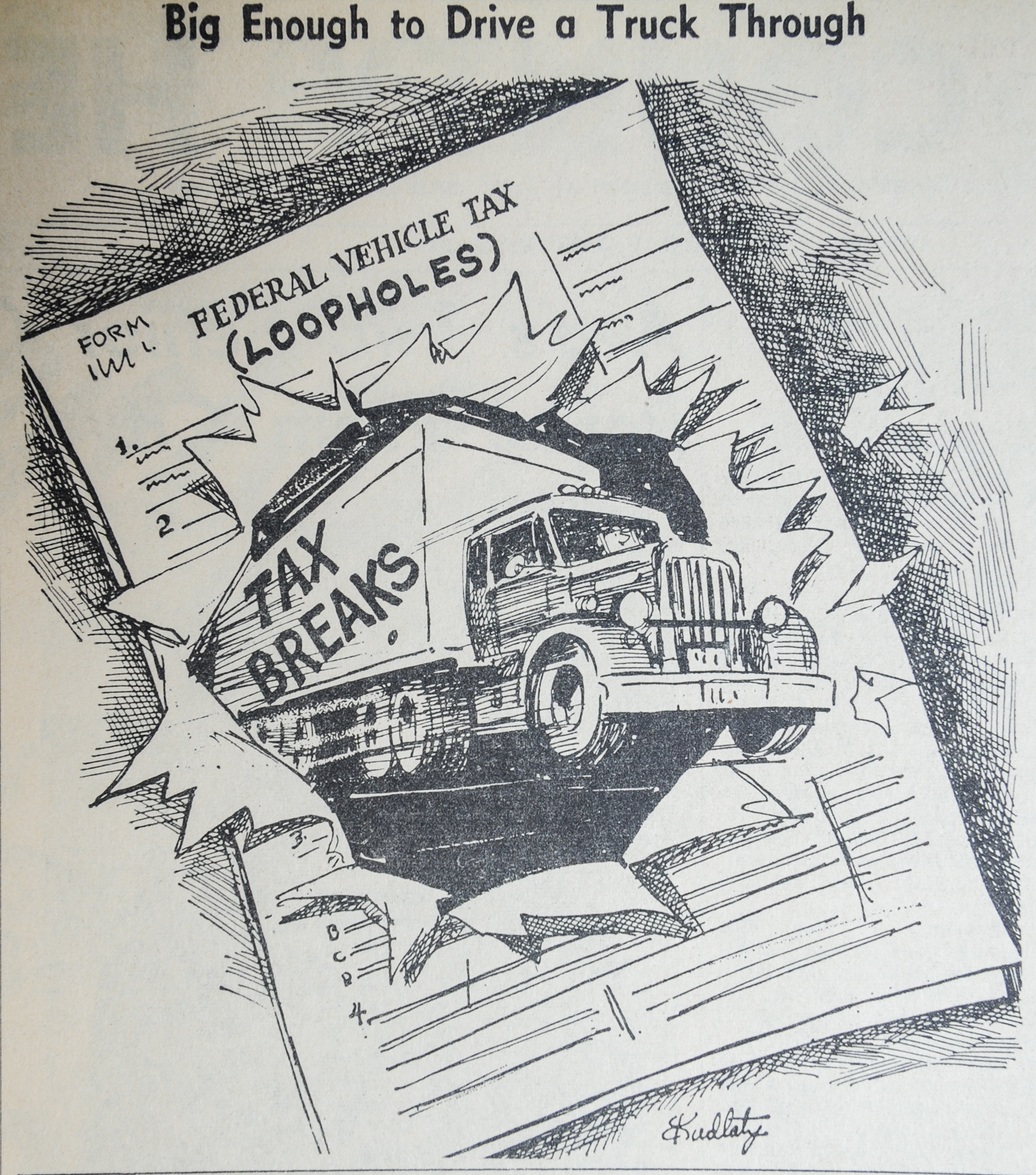 A total of $100,000 bond has been set for two men arrested on the square here early Saturday after a search of the men’s car turned up a time bomb and rifle in the trunk, a .45 caliber pistol and ammunition in an ash tray, and a .38 caliber revolver under the front seat.  The bomb which was made of 10 sticks of dynamite, an electric blasting cap, a battery and an alarm clock was defused by Cpl. Bill Davis of the Missouri Highway Patrol.  Federal and state charges have been filed against Alfred Earl Harflinger, 41, St. Louis, and James William Nash, 39, North Little Rock, Ark., formerly of St. Louis.  Further investigation is being made to determine if the presence of the two men in Ava has any connection with the fact that Mr. (Leslie) Heriford recently went into the LP gas distribution business after having been manager of another LP gas firm which recently changed ownership.

The three Ava R-I schools will be closed today and Friday because of a large number of absentees among the students due to illness, it was reported Wednesday afternoon by Supt. O.T. Tallent.

Connie Davis, daughter of Mr. and Mrs. Gene Davis, of Ava, was named to the honor roll at Bethany Nazarene College recently.

Open house will be held Sunday from 2 until 4 p.m. by Mrs. Virgie Spurlock in honor of John S. Spurlock who will be observing his 92nd birthday. Mr. Spurlock is one of two known Spanish-American War veterans in this area. The other veteran is J.D. Harnden.

Mr. and Mrs. Vernon Denney (Lulla Mae Frye) of Route 2, Ava, announce the birth of a daughter at 5:17 o’clock Friday afternoon, Feb. 21, in St. John’s Hospital, Springfield. The baby weighed eight pounds and two ounces at the time of birth and she has been named Melissa Ann.

Mrs. Glenda Starbuck of Ava remained a patient early this week in the Mansfield Hospital where she was continuing to undergo treatment for chest bruises and a possible hip injury suffered in a traffic accident. Mrs. Starbuck, wife of Herbert Starbuck, program director of KSOA Radio Station, was one of four young people injured in a two car accident Saturday on Hwy. 5.

A birthday party was held in the home of Mr. and Mrs. Jackie Holman Saturday night, in honor of their daughter, Peggy Sue, 4, and her cousin, George Webb, 15. 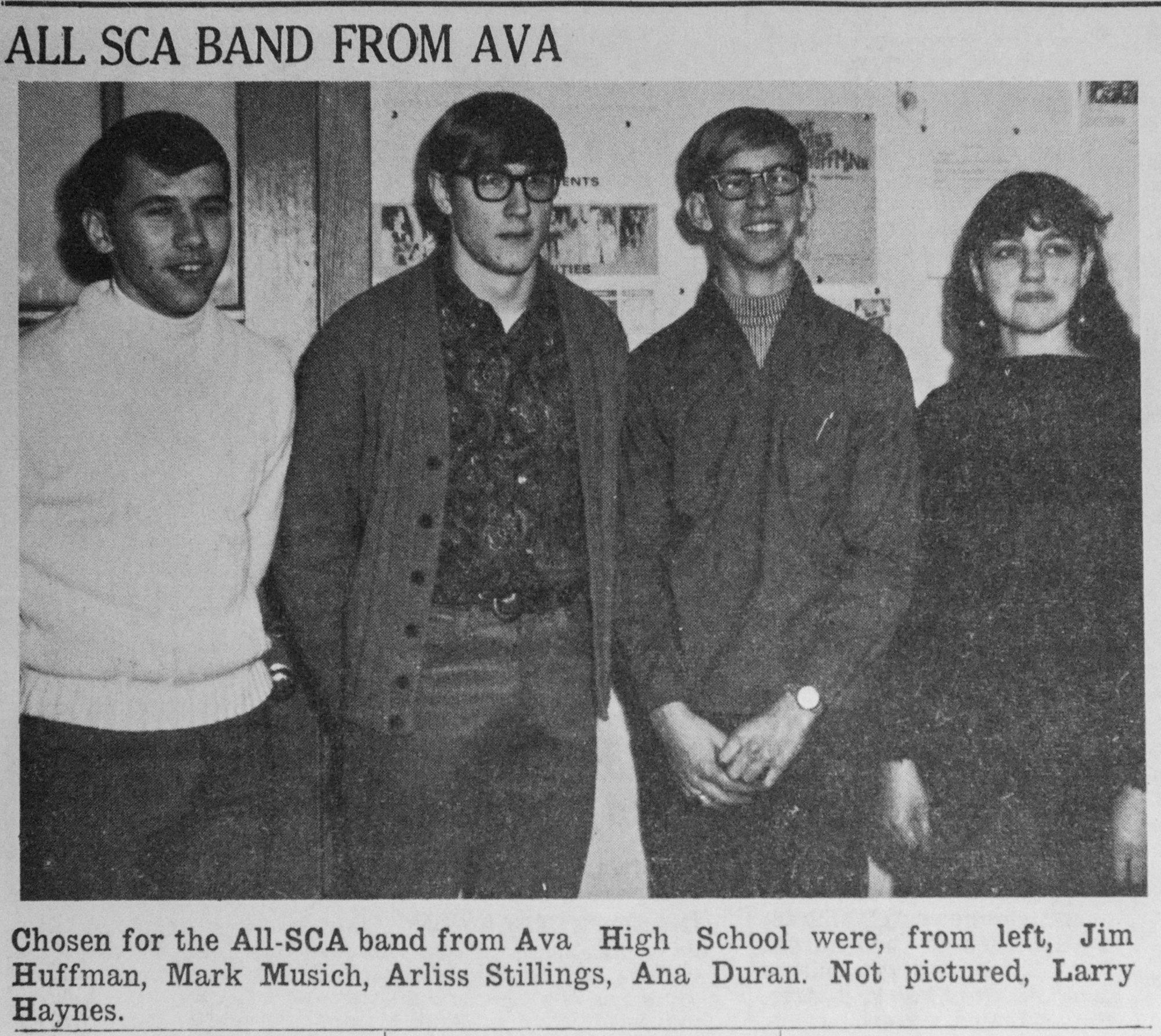 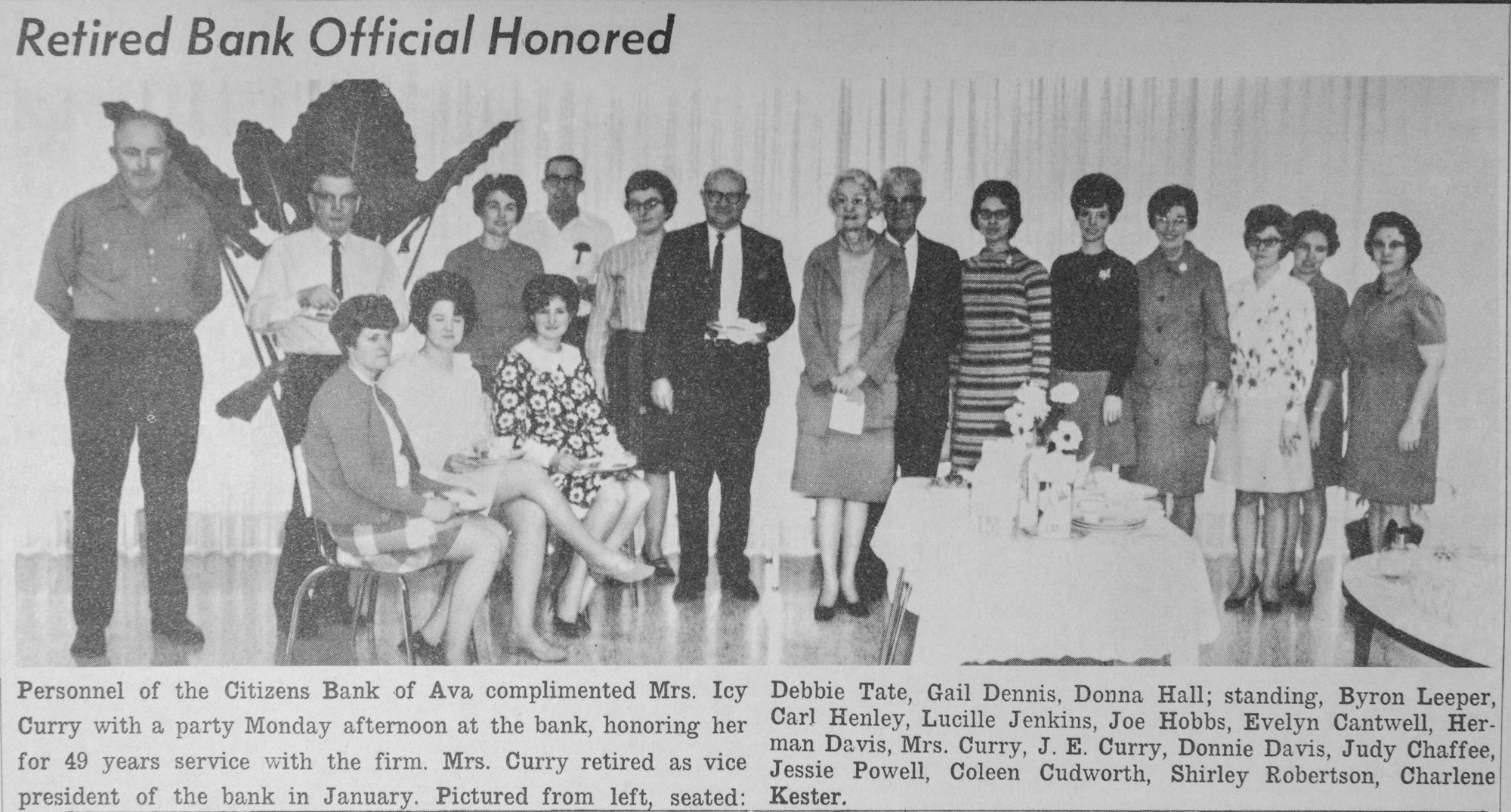 Reports of bombings of Berlin have dominated headlines of the past week.  Friday it was reported by United Press that American fighter planes roared over Berlin that day for the first time of the war, and record fleets of U.S. heavy bombers smashed unidentified targets in Germany.  Also on that day the British Royal All Force disclosed for the first time that it is using new six-ton blockbuster bombs.

Mr. and Mrs. Steve Lathrop of Ava, who recently received word that their son, Private Fred L. Lathrop was killed in action in Italy Jan. 5, 1944, Tuesday received from the war department a certificate of an award of the Purple Heart medal awarded to Private Lathrop following his death.

By direction of the president, the oak leaf cluster in lieu of an additional air medal was awarded Feb. 1, 1944, b Lieutenant General Millard Harmon, Commanding United States Army Forces in the south Pacific area, to Willard L. Pueppke, first lieutenant, Thirteenth Army Air Force, as pilot from October 29 to November 14, 1943.

Fred O. Lethco is bringing the nationally known Aunt Jemima to Ava Saturday, March 31, and that expert in the art of flipping hotcakes will be at the Clover Farm Store all that day to serve her delicious cakes free to all who care to try them. Aunt Jemima is brought to Ava through the courtesy of the Quaker Products Company.

Many women will not want to be the helpless creatures that women have been, the clinging vine type does not appeal, neither-perhaps-does the unexciting job of housekeeping.  We’re proud that she can also drive and repair her truck, do a neat job of riveting and do it smiling.

Pettit’s Theatres –– at the Avalon “Sweet Rosie O’Grady” a sweet, roguish, rowdy, concoction that everyone will enjoy, with Betty Grable and Robert Young.

Raymond Fowler, son of Mr. and Mrs. F.T. Fowler, and Everett Fletcher, son of Mr. and Mrs. Wm. Fletcher, both of Ava, have confessed to robberies committed in Ava on Saturday night of last week.  Nine quarts of whiskey and $68.04 in silver and currency were recovered Tuesday afternoon.  The KCO&S Ry. Depot, Reynolds’ Dry Goods Store and J.T. Singleton’s Grocery were the victims.

The County Court in session in Ava this week placed County Treasurer Homer J. Norman on a straight salary of $80 per month instead of allowing him one percent on school money disbursements and in addition $50 per month. Under the former plan the treasurer’s salary amounted to approximately $70 per month.

T.H.E. Mathis will be the next postmaster in Ava to succeed John H. Orr who resigned the position several months ago.  Six patrons entered applications and took the examination.  Those to compete with Mr. Mathis for the appointment were C.H. Burdett, H.S. Wilson, L.H. Pettite, Sam Heard, and Mrs. Ocie Dyer.

A flag raising is to be held at the school campus in Ava within a few days. A 105-foot pole has been secured, and is now bing prepared for the occasion.

Any nation that can send two million soldiers abroad in record time ought to be able to ship 7,000 anarchists across without missing any of them for very long.

There are a few cases of measles and whooping cough in town this week.

A young married man in the eastern part of Barry County went to war.  In August his wife received news of his death. In November she married again. Last week the soldier and first husband came home, but the Cassville Republican doesn’t mention what happened then.

The government has rejected all bids for the Ava-Mansfield mail route according to notices sent to parties in Ava who had entered bids.

The basketball games between Hartville town team and Ava town team at the Wilson Opera on Friday and Saturday nights of last week resulted in victories for Ava.  The score on Friday night was 59 to 2; and on Saturday night, 30 to 2.  Hartville failed to get a single field goal in either game.

The trial of Frank LaDue, a Stone County farmer, charged with the murder of his brother-in-law, John Akers, at the LaDue home at Hurley in April a year ago, is to be held next Monday before Judge Stewart. The shooting of LaDue followed a family quarrel.

WEST PLAINS –– Monday night about 11:30 o’clock, several hundred men, supposed to be inhabitants of Ozark County, Missouri, and Fulton and Baxter counties, Arkansas, assembled at Mountain Home, Ark., for the purpose of lynching Anderson Carter and Bud Montgomery, alias Jasper Newton. The mob was very orderly and went about its business with a firm determination to see that justice was meted out to the guilty. The mob overpowered the jailer and guard, and took their guns and demanded the keys. After about 20 shots the firing ceased. Anderson Carter was dead, but Newton was found to be alive and asking or water. This was given him, and then the mob finished its vengeance by riddling his body with bullets. Both died protesting their innocence, and only asked that they be relieved of their shackles.

Joe Wright started to burn down the Dexter calaboose, but about the flame, he caught fire himself, and changed his mind.

A thrilling incident of the late great storm was that a hen turkey was buried in the snow at Liberty, and kept on laying eggs till she was liberated at the end of three days.

The New York legislature has been petitioned to enact such laws as will break up the white slavery as it exists in the metropolis known as the padrone system.  Under this system imported Italians are made to work for the importers for seventy-five cents a day, while the importer receives from the city $1.50, he himself pocketing the extra seventy-five cents, and at the same time making the slaves vote the Democratic ticket.

For 40 years the principal of a young lady’s school in Copenhagen has been respected as a lady. Lately she became very rude to one of her pupils and was arrested.  After two days incarceration it was noticed that “she” needed shaving. Then it became manifest that the principal was really a man.

Leprosy has shown great increase and has appeared in many new places during the last half century.

In Wales a signboard reads: “Take notice that when this board is under water, the road is impassable.”

The mumps have run out and now it is the Gripp.

VANZANT –– The vacant land here is being about all taken up by newcomers whose names we do not know, but are glad to see them come in.

This end of the county believes in progression and are building up as good a society as there is in anybody’s county.

The Douglas County Normal School and Business Institute is a practical school for the education of young men and women who desire to fit themselves for successful teaching; to prepare themselves for other professions; to acquire business qualifications; and avail themselves of good instruction at a small expense.