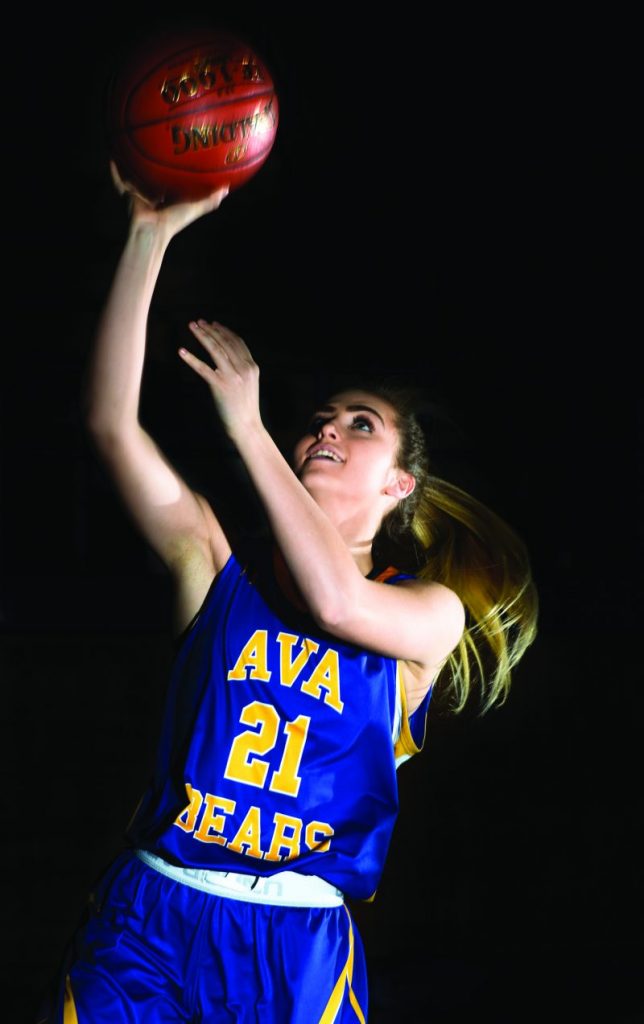 Girls Most Valuable Player of the Year 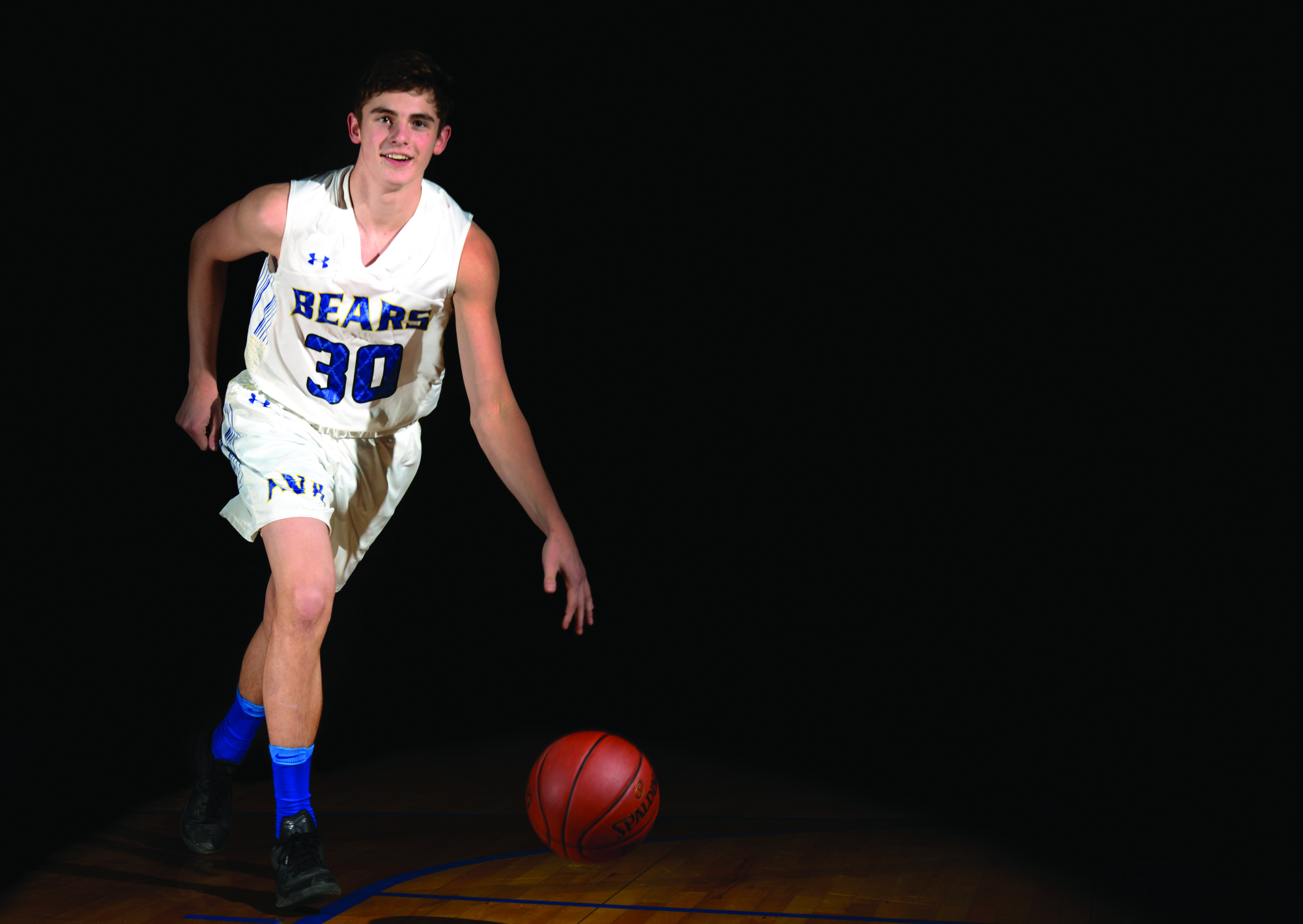 Basketball Season is over and done with as both students and coaches begin looking forward to other sports and begin to prepare for the next chapter in Ava High School’s book.

This is the first year the Douglas County Herald has bestowed these accolades to the student-athletes of Ava High School. The decisions were made by Herald sports writer, Jason Hoekema, free of coach or other outside influence.

These awards are given to specific students based on season statistics, not career statistics.

Year-class does not influence selection, students in all high school grade-years are eligible for these award selections except Newcomer of the Year, which is reserved for freshman-class players.

Outgoing senior Ashton Bewley is this year’s MVP. Scoring an average of 17.2 points-per-game for a season total of 430 points. This year she was recognized for shooting her 1,000th game point on the home court against Bradleyville.

She has been a starter for the Lady Bears, playing in all 25 games of the regular and post seasons. She made a total of 125 two-point shots, shooting a cumulative of 41-percent from all around the bucket.

She also sunk 22 threes this year and was named the MVP in the inaugural Cabool Bulldog Classic Tournament.

On defense, she raked-in 75 steals and forced 54 turnovers with 54 deflections. Shooting 58-percent from the free-throw line for 114 points.

As a player who winds up under the hoop, Bewley executed 64 offensive rebounds and another 55 rebounds on the defense for an average of 4.76 rebounds per game in the 2018-19 season.

She is also a team player, credited with 60 assists, which equals at least 120 more points for the Lady Bears as a team.

“It is an honor to be named that,” said Bewley in an interview. “I came into my freshman year and we had a bunch of older classmen. They were really good, and I ended up starting so that was really shocking. My first two years I played, I was timid, and I didn’t want to mess up and get in trouble. After that, I grew in my junior and senior year and I think I’ve helped the team out. My thousand point, I couldn’t have done it without my team and it has been fun playing with them these years.”

Offensive Player of the Year goes to senior Lauren Mendel. With her physical attributes, she was key in getting the ball under the bucket and chipping-in two to advance the team into their 14 season-total wins.

Offensively, Mendel delivered 224 points to the board for the Lady Bears scoring an average of 8.96 points-per-game second only to Bewley.

With 92 two-point buckets and another four from times she was outside the arc, she shot a season cumulative 52-percent for the Lady Bears. She is credited with a total of 105 rebounds, 28 free throw points, and 26 assists this season.

“Well I (made) the basket a lot and I’m glad I can make those,” said Mendel. “That’s what I’ve been trained to do. I guess if I didn’t do that I wouldn’t be fulfilling my job in my position.”

Mendel wasn’t always a varsity starter but was determined to contribute in any way she could through her high school years.

“I played a little bit of varsity my freshman year, and sophomore year I was starting on varsity and I wasn’t expecting that. I kind of just decided that if I’m going to be good at this I’m going to be good at it. That’s what I’m going to do. Over my sophomore year and junior year breaks I went to all the camps I could. Then junior year rolls around and I was the top rebounder. Second top scorer. Then Senior year rolls around and same thing and it’s a good feeling, I worked hard for it.”

Mendel appreciates the fan base, as all of the Lady Bears do, and she hopes the support will continue-on for the upcoming classmen.

“Thank you guys so much,” said Mendel. “You guys were there for us and believed in us. Thanks to our family and friends for everything, all these years you guys believed in us.”

On the other side of the court, or all over the court, Eden Little was a force for opponents to deal with. Many of her contributions are not mentioned in offensive stats but are made on the defense. She is this year’s Defensive Player of the Year.

Playing 23 of the 25 games this season, she made a total of 67 steals at a rate of 2.9 per game. She is credited with 55 deflections and forcing 65 turnovers for the Lady Bears at an average of 2.82 per game, on the front of the Lady Bears’ defensive efforts.

Little was also able to make a difference under the bucket, on both sides of the court. She made 35 offensive rebounds and 40 defensive rebounds with a team-leading average of 3.26 rebounds per game.

“I can move fast and I’m better at defending someone,” said Little. “Watching how they move and being able to move with them. (My) freshman year I did sit varsity and I was really excited. During the summer before my sophomore year coach Houk came up to me and (told me) I was going to start as point guard. I was really excited for this chance. I never thought myself as a point guard. I was a post back in middle school and that’s just what I always was. So, to be brought into point guard it was amazing and I really enjoyed it. (It) doesn’t mean you always make the points, and you’re not always set up for stuff, but it means you know the floor and you know where you’re looking and you can understand plays.”

Newcomer of the Year is reserved for a freshman who has made a great impact on the team’s success in their first year. This year that student is Hanna Evans.

With 179 points in her high school career debut, Evans averaged 7.16 points per game and was the second highest three-point shooter on the team with 16 long balls through the hoop.

She also hit 48 two-pointers, fourth on the team this year. She made a total of 201 rebounds, leading the Lady Bears’ with 86 offensive and 115 defensive rebounds at an average of 8.04 per game.

The freshman also played some stout defense with 68 steals, second only to Bewley’s 75, has been credited with 76 assists and was responsible for 74 turnovers with 52 deflections in her opening season. From the line, the freshman shot 67-percent for 35 points from opponent’s charity.

That was the chant from the Ava student pep squad when Andrew Dalton made a clutch play on the court. With 486 points in his name at 19.4 points-per-game, Dalton is this year’s Most Valuable Player on the boys’ team.

Dalton has been an offensive star, shooting 150 twos and 31 threes in his inaugural season. Shooting at 76.2-percent, the young player was also to pull 93 points on free throws. He has been credited with 62 offensive rebounds, 125 defensive rebounds and 80 assists. A hat-tip to his team-oriented game mind on the court.

On the defense, Dalton plucked 47 steals and was responsible for 39 deflections.

“Really I’m just grateful that I’m surrounded by a bunch of really good teammates and great coaching staff,” said Dalton. “They just put the opportunity there for me. I’ve gotten to know my teammates well and I think we’ve bonded. I think next season is just going to be better than this one.”

For the fans, Dalton said, “Thanks for coming to support us and be sure to come back next year.”

The junior returns next year and is expected to do more than play. As a senior and a potential leader, King will have to fill the shoes of at least one out-going senior as the team evolves into a new roster for the new year.

On offense, King is credited with 55 two-point shots and a whopping 52 three-pointers to lead the Bears in outside shooting. With some height and speed, he was also credited with 68 rebounds and 38 assists for the Bears.

“I keep working hard,” said King. “Freshman year I didn’t even play varsity, I just played a bunch of JV. My shots started to form a lot better since sophomore year I went from not even playing to starting first game. That really surprised me. I kept starting and kept shooting the ball out and stepping into my shot helped me a lot. When I don’t get my feet set (I shoot) at a lower percentage.”

King is looking forward to the next season where he will return as a senior and would like to tell the fans, “Thanks for all of the support. It’s going to be a really good season next year.”

On the other wire, defense is key. A good defense equates to more offensive possessions in basketball and possibly more scoring possessions. Defensive players don’t always get the lime light in the stat book, and this is an opportunity to recognize the Defensive Player of the Year, Caleb Johnson.

With 20 deflections, 16 steals, and a couple of trips flying out-of-bounds, Johnson has led the Bears in defensive stats in his senior year. A key point of his defensive abilities is running wire-to-wire quickly and setting for the charge, which he took 11 of this season.

He is credited with 34 assists and 27 defensive rebounds, 34 rebounds total. But Johnson isn’t all defense, either. With 104 points this season from 12 twos and 22 threes with his trademark scoot, set, shoot routine.

As a defender, Johnson found himself with the ball after plucking 16 steals this year. In those cases, he was credited with 32 transition points and another 26 off of turnovers by opposing teams.

“It’s just nice to be appreciated,” said Johnson. “Most people don’t think of defense as being a big part of the game, but defense wins championships. I started all three years from freshman and junior year and then we had some good ballplayers come up. (I said) as long as I can contribute, whatever I got to do to make us win, as long as I contribute and I’m good.”

Newcomer of the Year is reserved for a freshman player that has had an impact on the success of the team during their starting year. This year the award goes to Kaden Bruce.

With 123 points in his name from 17 twos and another 22 threes, Bruce has played 25 games as the team’s point. If the paint came open, he will drive it to the steel hoop or get set on the arc for three points.

Bruce shot for 60.5-percent from the line, earning 23 points from the opponent’s mistakes. He is credited with 47 rebounds, 73 assists, 32 deflections, 27 steals and three shot blocks.

Bruce was not available for a photo or interview Monday afternoon, but his contributions as a freshman were impactful and he will be a player to continue watching for the next three years.

Girls Defensive Player of the Year 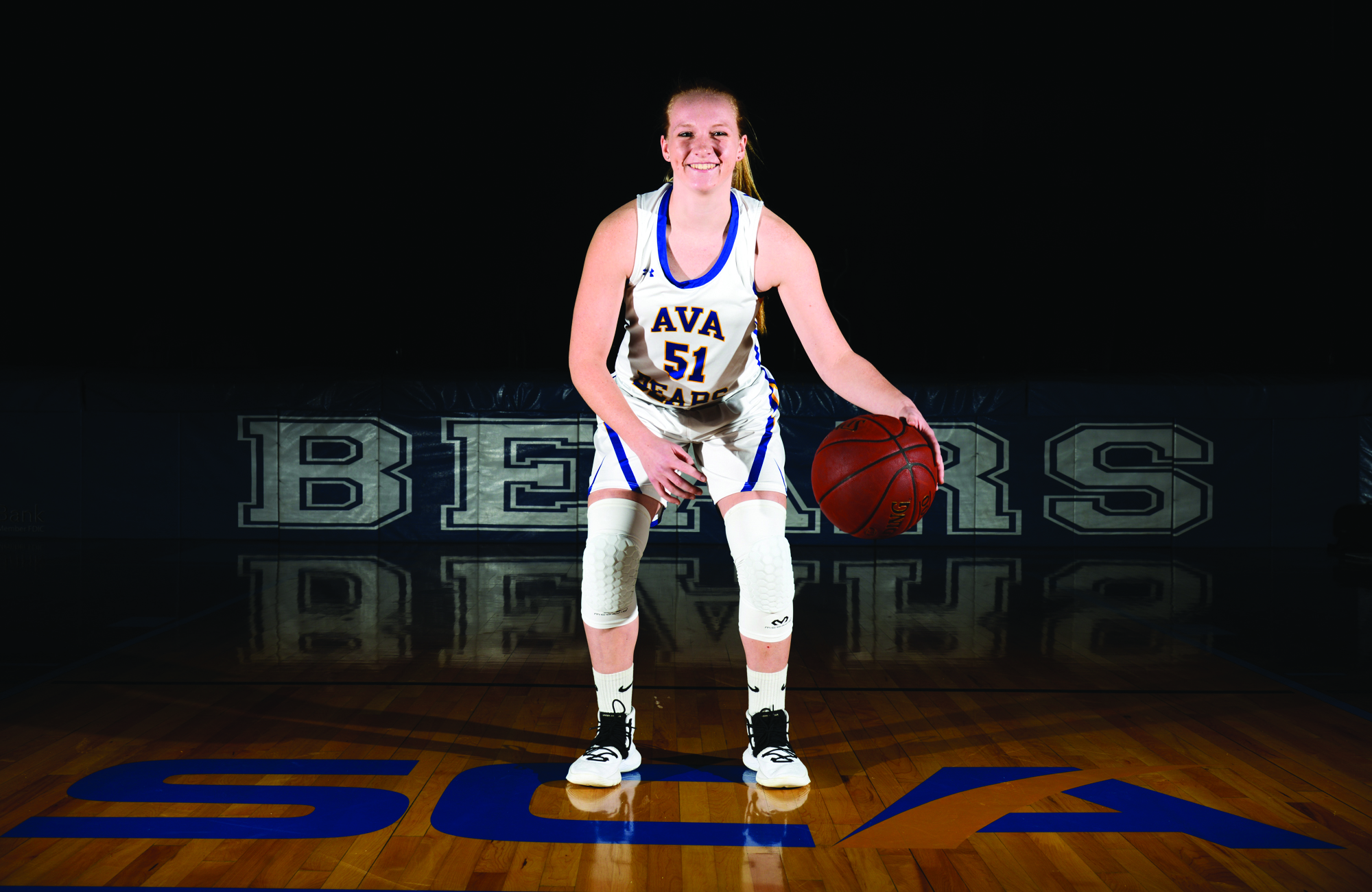 Girls Newcomer of the Year 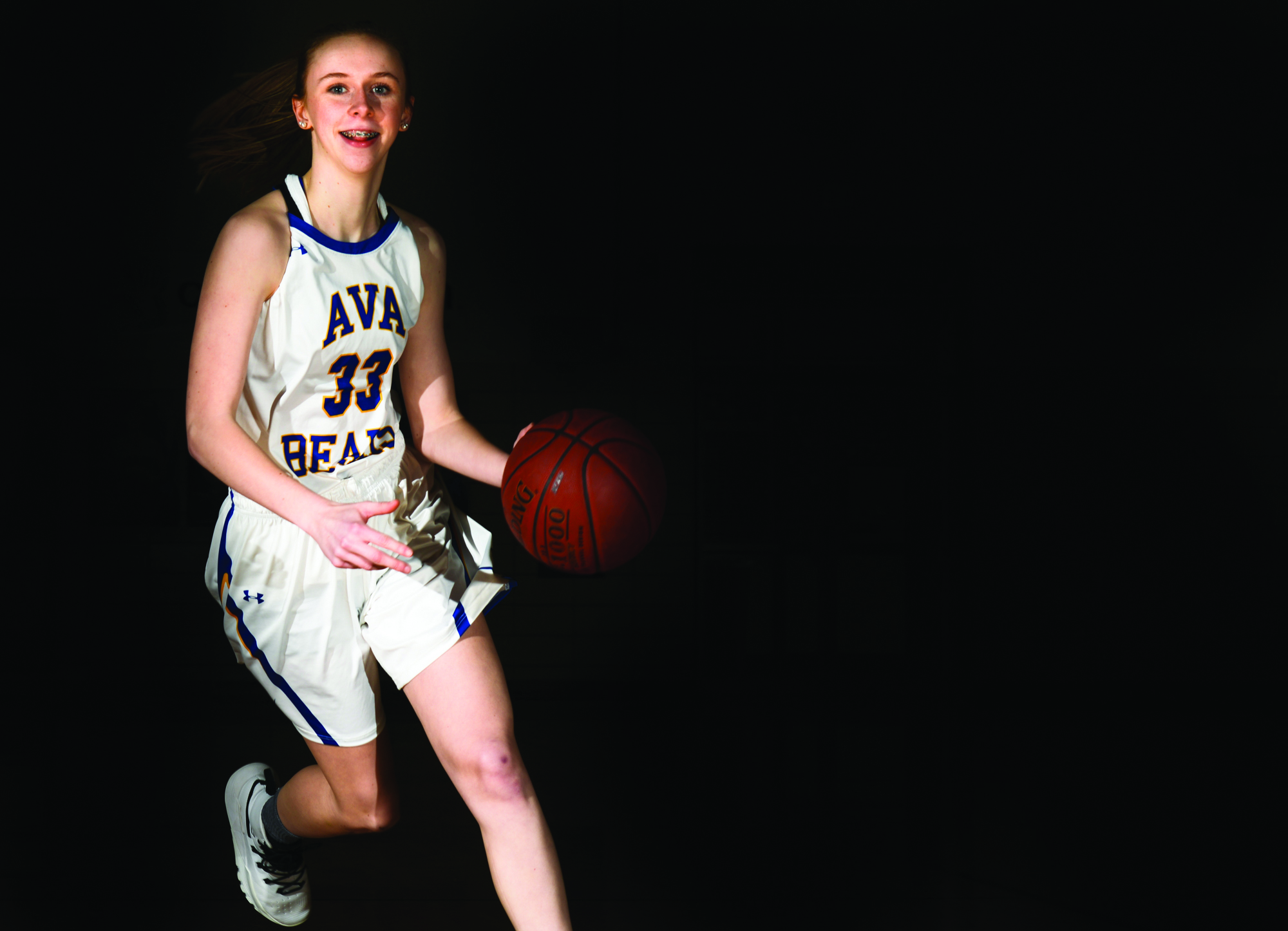 Girls Offensive Player of the Year 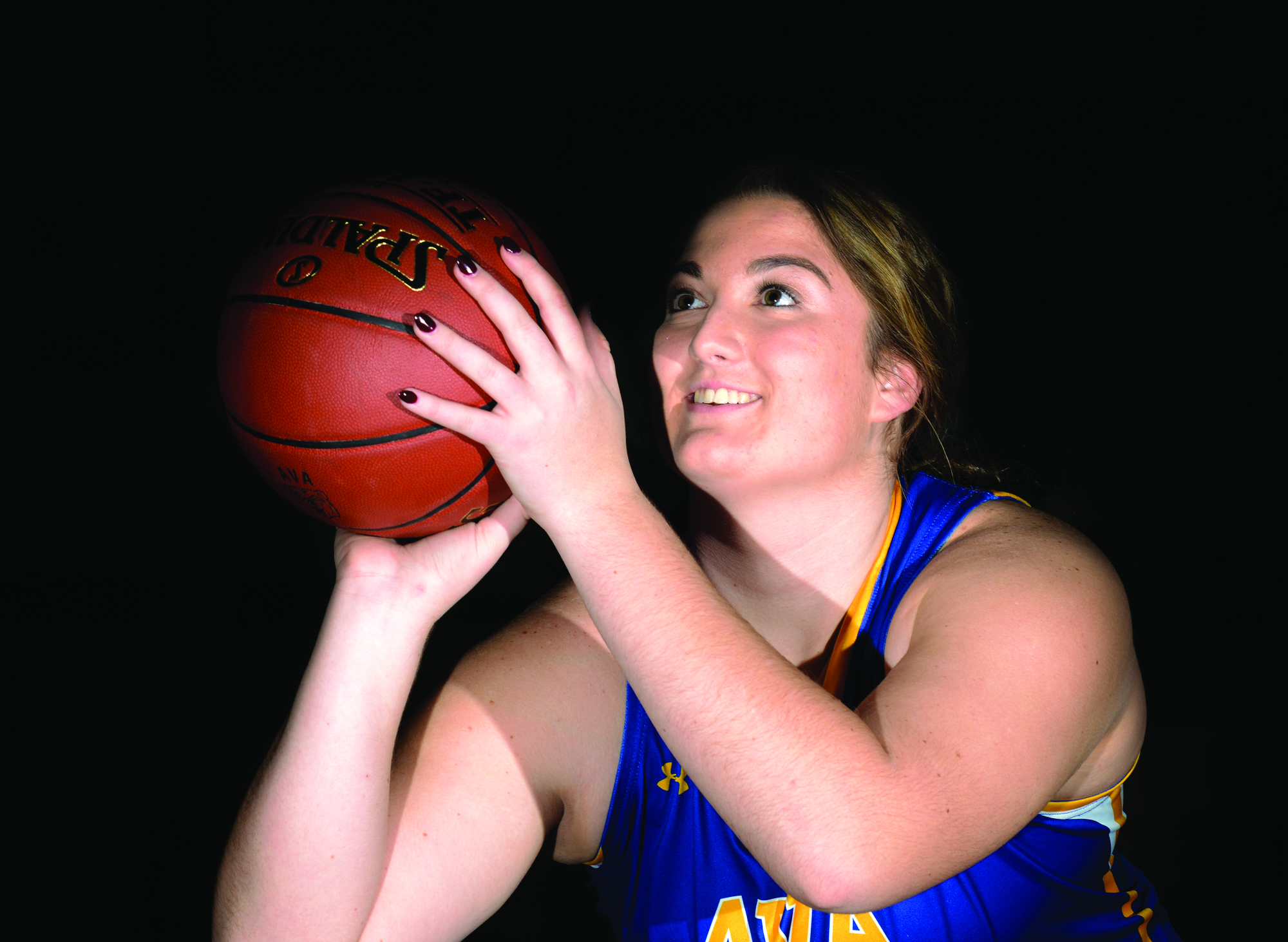 Boys Offensive Player of the Year 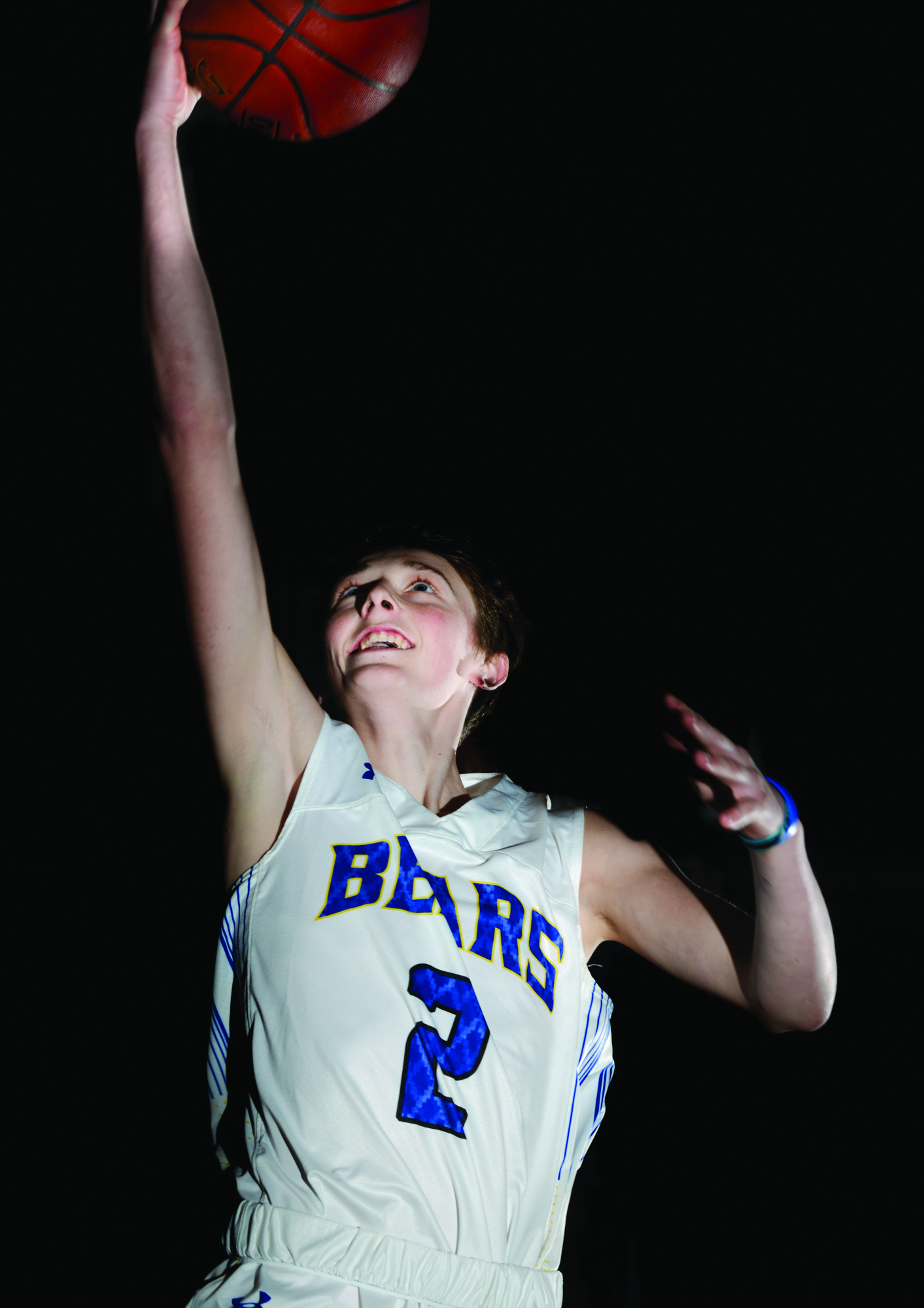 Boys Defensive Player of the Year 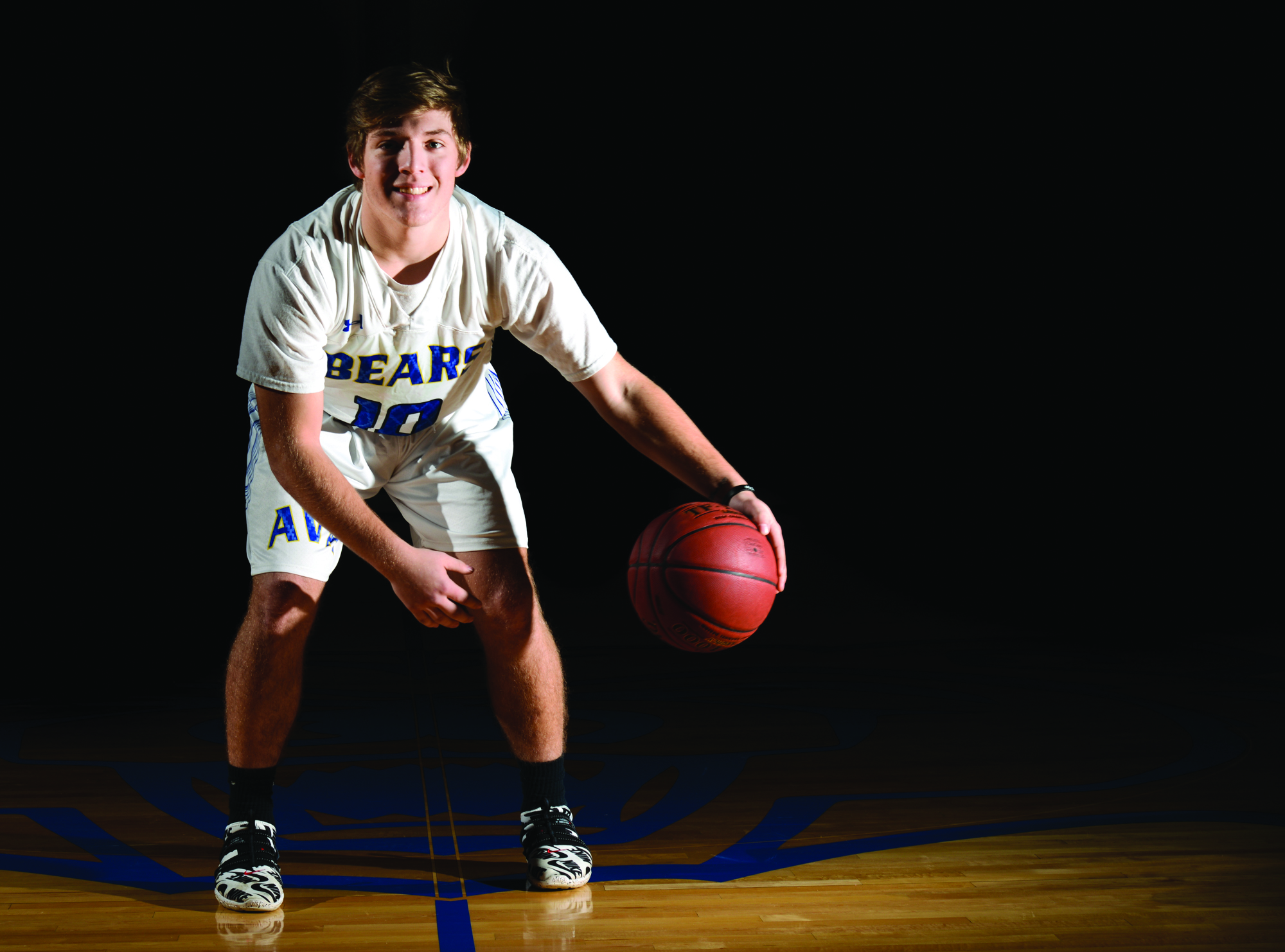