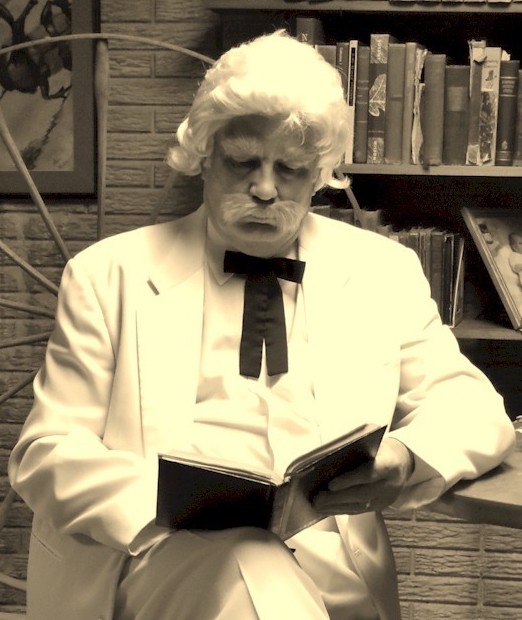 The Ozark County Historium in Gainesville will welcome a very special guest on Thursday, March 7, at 10 a.m., when none other than the venerable Mark Twain visits for a morning of stories and conversation. Missouri’s famous native son will talk about his views on life, characterized by his well-known wit and wisdom.

In his “other life,” this Mark Twain presenter is known to family, friends and colleagues as Don Nicholson, recently retired 4-H Specialist with the University of Missouri Extension Service.

Nicholson was raised on a family dairy farm in the Bitterroot Valley, near the very western edge of Montana. After working as a county agent with Montana Cooperative Extension for 10 years, in 1988 he moved with his family to Missouri, where he has served in a variety of roles with the Extension Service. Most of that time spent was spent as a 4-H youth development specialist with responsibilities for four counties in the northeast corner of Missouri. Nicholson retired in December 2018.

When he moved to the Hannibal area, he developed an intense interest in the works of Samuel Clemens, better known to most as Mark Twain.

“With apologies to Hal Holbrook,” he says, he made his first Mark Twain presentation on a dare from a colleague in about 1995. Since that beginning, he has shared his characterization of Mr. Twain to various audiences throughout the state.

According to Nicholson, “One of the things that attracts me to Twain’s work is his ability to address deeply significant facets of human nature with levity. He invites us to laugh at ourselves, find unexpected dignity within ourselves and others, and gently cause us to think more deeply about our own biases and beliefs.”

Nicholson’s presentation at the Historium is free and open to all. Seats are available on a first come, first served basis. The Ozark County Historium, which is handicapped accessible, is located on the west side of the square in downtown Gainesville. For more information, call the Historium at 417-679-2400, or email ozarkco1@ozarkcountyhistory.org.