With natural gas apparently on its way to Ava, the City council is investigating the possibility of building its own distribution system.

An Ava man is free on $50,000 property bond after being charged recently in connection with a Feb. 18 burglary attempt at Patty’s Pawn Shop on the Ava Square.

The annual Blue & Gold Banquet was held Tuesday, Feb. 22, at the First Southern Baptist Church in Ava.  The banquet celebrates the 64th year in cub scouting.

LaVerne Norman celebrated her birthday Sunday at her home with family members as dinner guests.

Golda Dooms was honored by her children and grandchildren on Feb. 20 as she celebrated her 92nd birthday at the Ava Community Center.

Only a fool tests the depth of the water with both feet.

DENLOW –– Congratulations to Latha and Dee Neuroth on the arrival of their daughter Alexandria Dee. Alex Dee is their first child.

FAIRVIEW –– Bro. Danny Letsinger brought the morning message from the book of James at Pleasant Ridge Baptist Church at Dogwood.

The Ava High School Alumni Banquet Committee has been given permission of the school board to hold the 1994 banquet in the high school gym. “With your help we’ll jazz up the 1994 Alumni Banquet,” says Chairman Jerry Sellers. 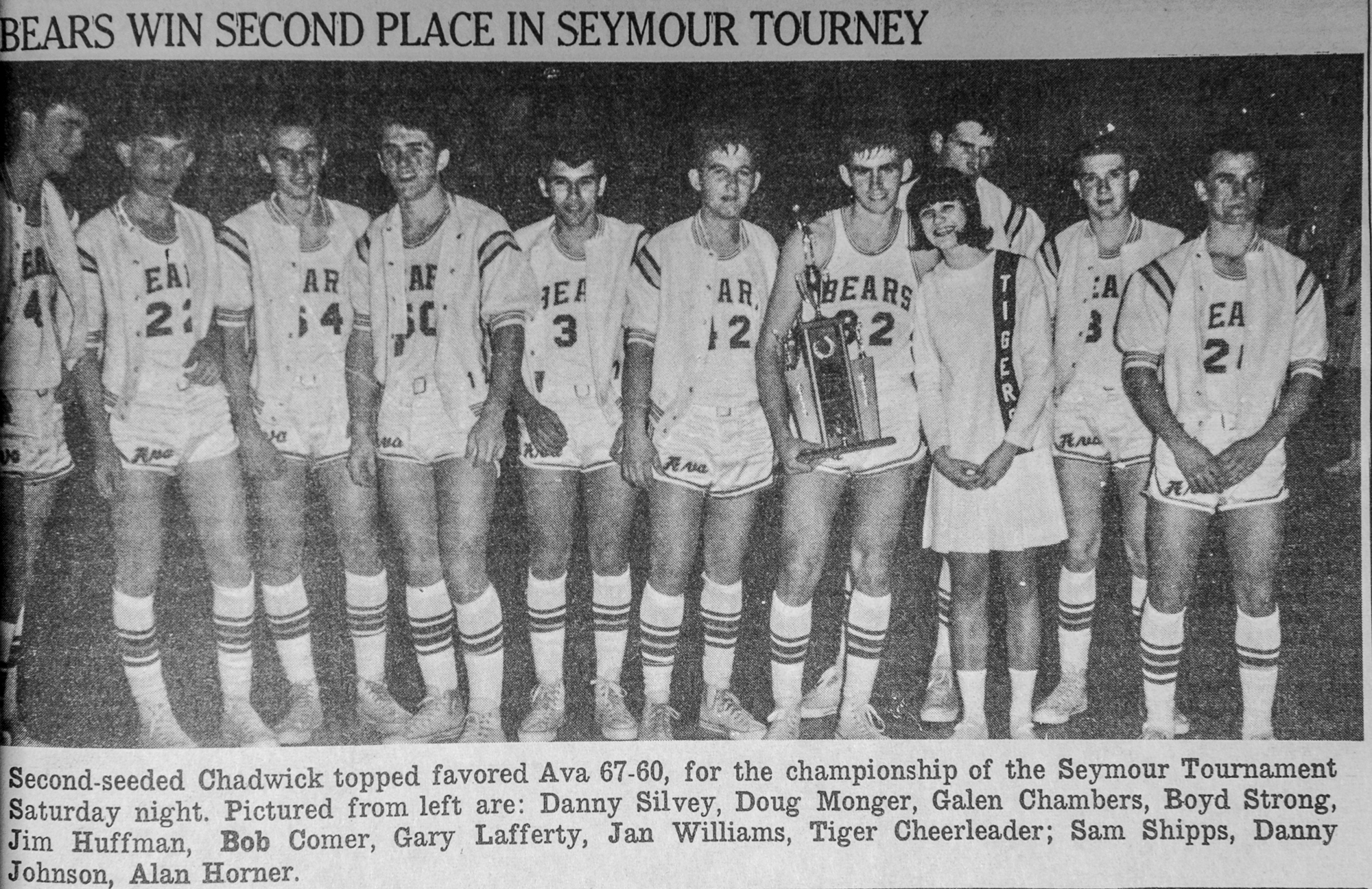 A proposed plan for telephone service for eastern Douglas County has been agreed upon by three telephone companies which will also service portions of Howell and Ozark counties now without telephone service, Representative Mervin R. Case reported this week.

A new LP gas business was opened in Ava recently, it was announced this week by Leslie Heriford, owner and operator. The firm, Ava Rural Gas Co., Inc., located at 915 South Jefferson in the former Dodge agency building, operates two bulk trucks along with bottle gas and a service department for its users, Mr. Heriford said.

Mrs. Harry Williams of Ava will serve as chairman of the 1969 Easter Seal campaign in Douglas County, March 1 through Easter Sunday, April 6.

Mrs. John R. (Frances) Littlejohn of Isabella, widely-known astrologer, has agreed to teach a course in astrology for Springfield’s YWCA. 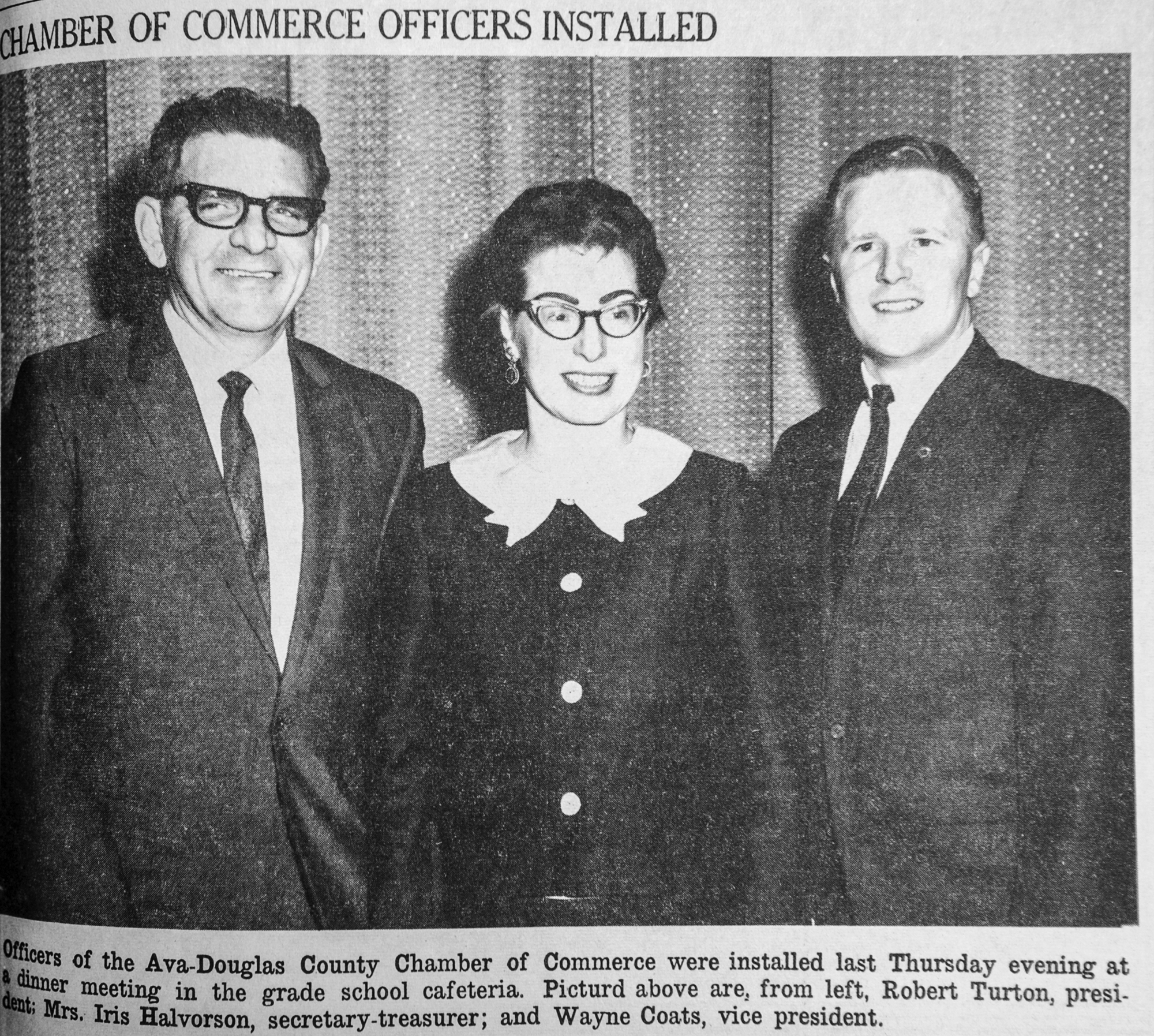 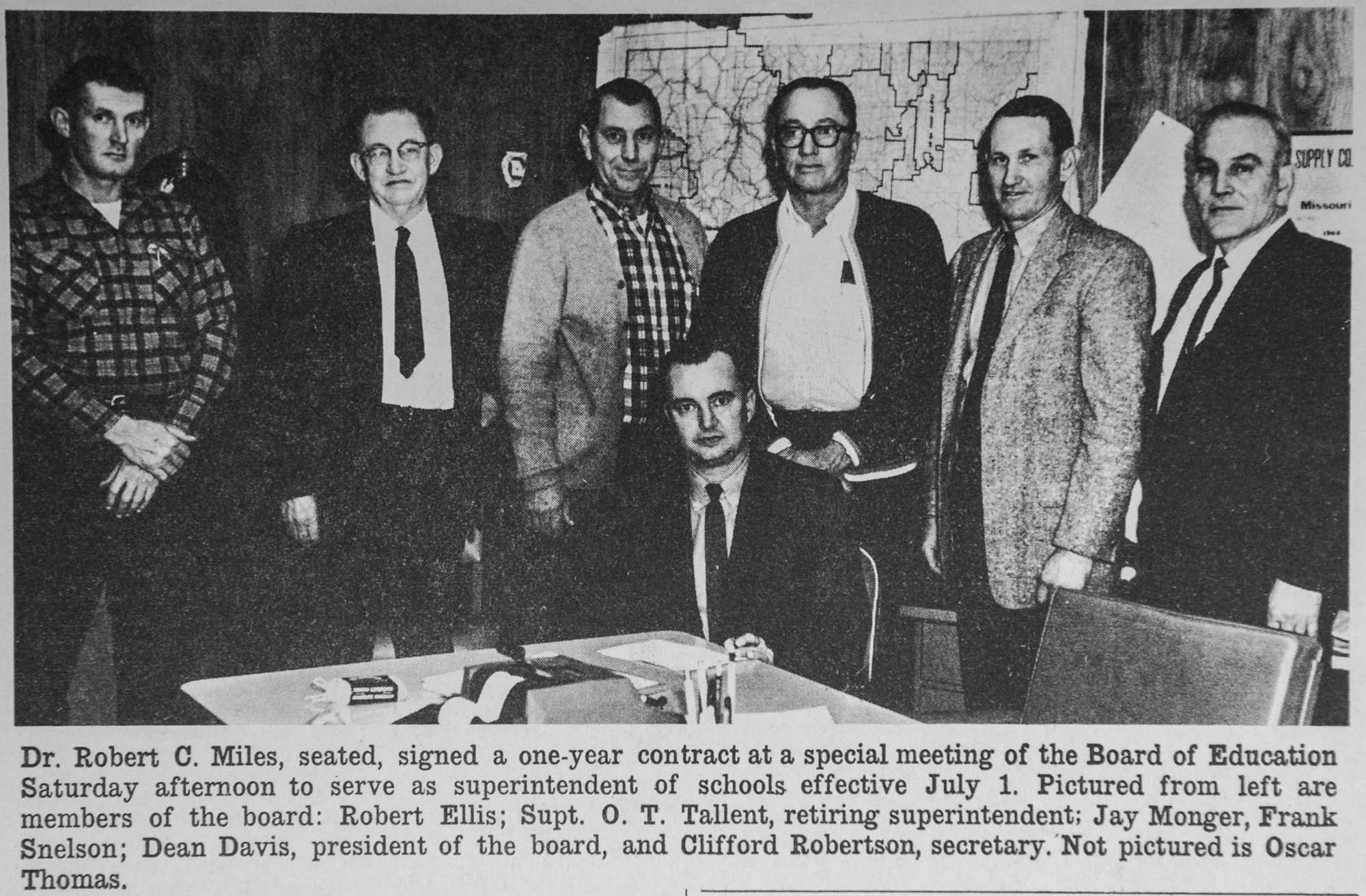 PFC Paul Dooms left Monday to return to Fort Belvoir, Va., where he is based with the Army.

Ray Parsley, balanced farming agent for Douglas, Ozark and Wright counties, discussed nutrition and the wintering of beef cows in the cheapest way at the second session of the beef cow and calf school being held in Ozark on Monday nights. 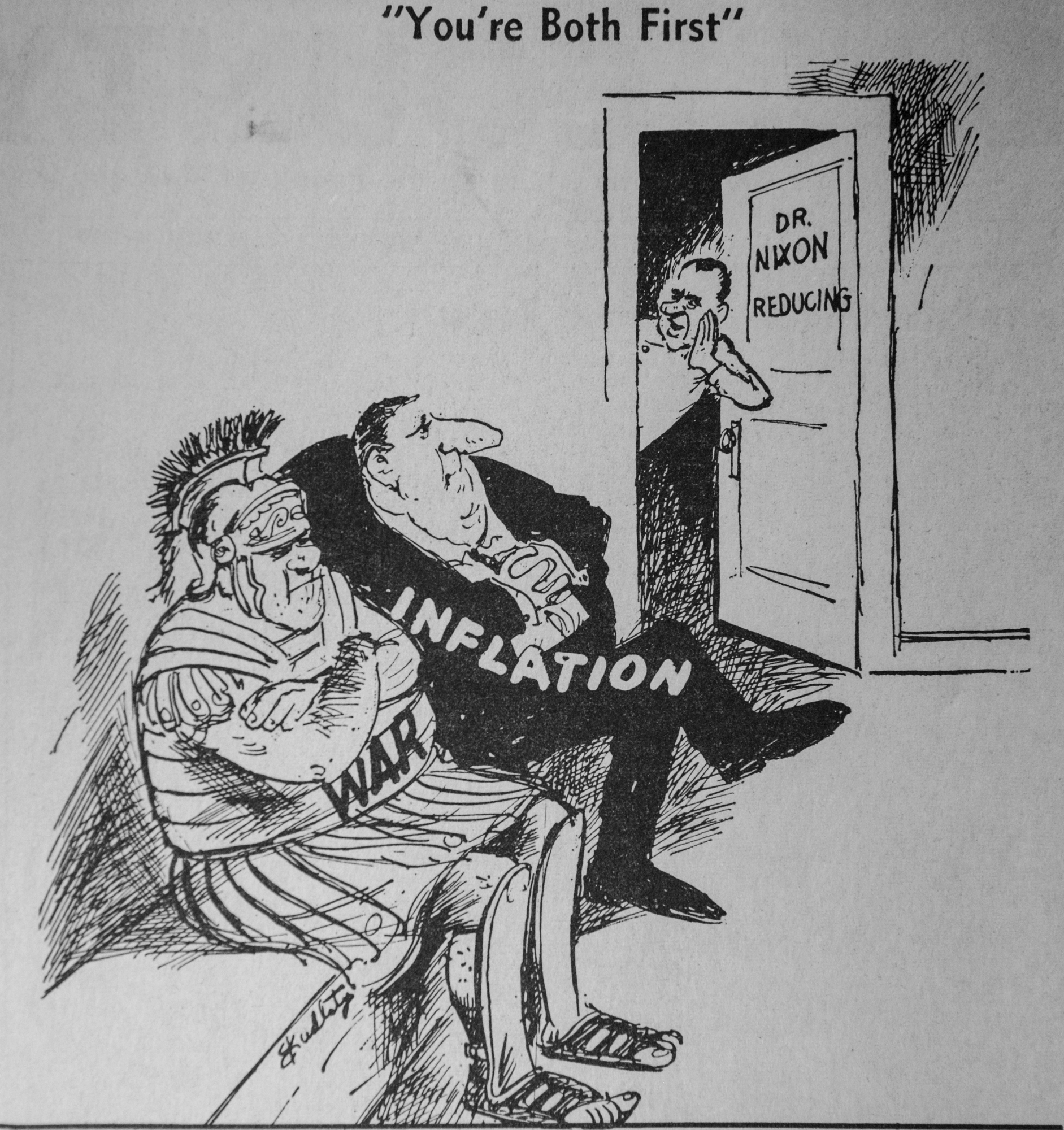 Members of the Ava High Future Farmers are conducting activities this week in observance of National FFA Week.  A total of 83 boys are enrolled in the FFA program here with Wayne Powell as advisor.

Attorney Ben J. Martin of Springfield has purchased the controlling interest in the Farmers and Merchants Bank at Mansfield. 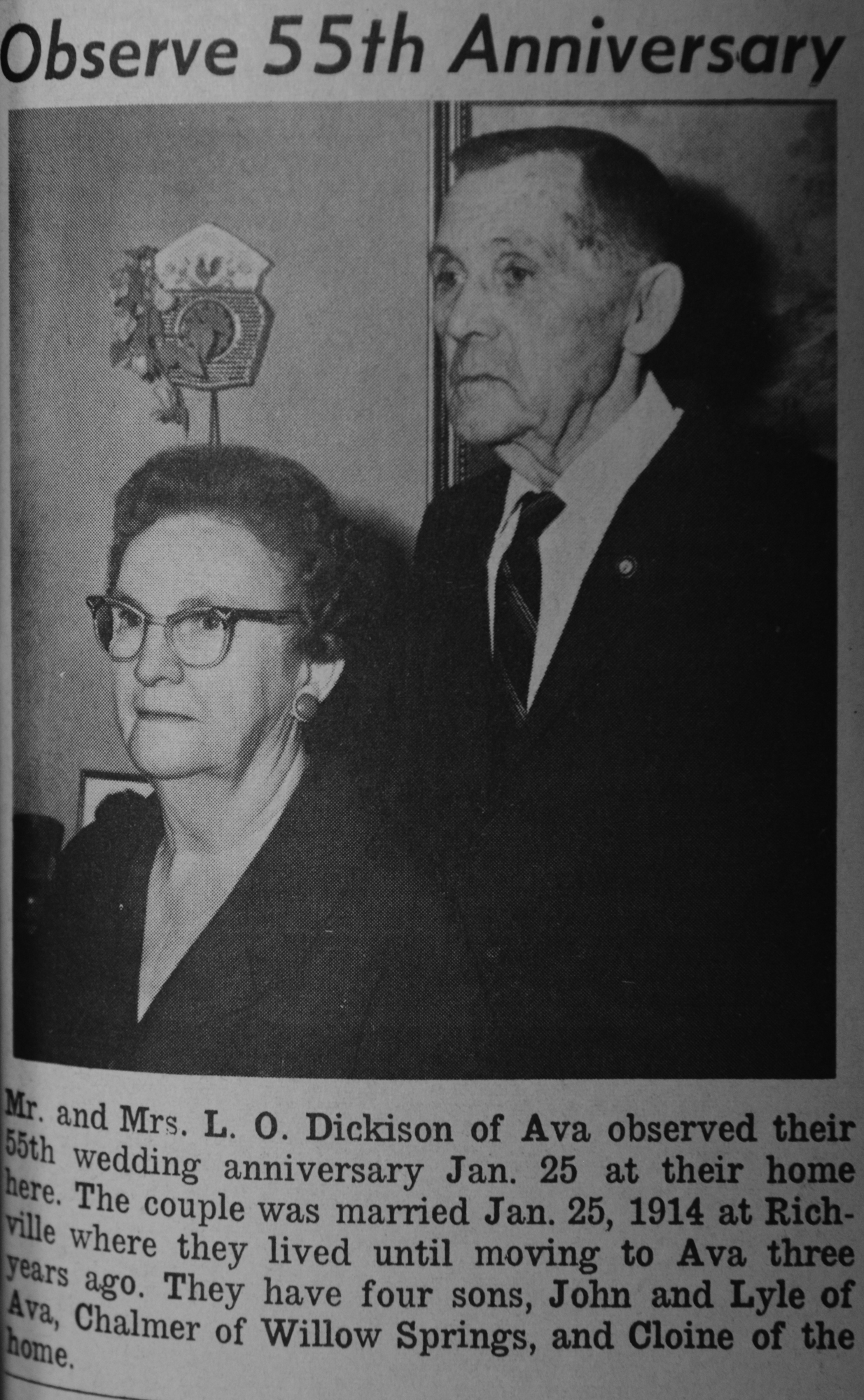 Mrs. Girlie Taylor has established residence in rental property at 720 NW 3rd Avenue, which is owned by Mr. and Mrs. Marvin Barnes, where she will be residing until her new home is being completed on Northeast 5th Street.

American Naval forces have been striking hard at Japan’s Pacific Island outposts the past week.

Wayne McCullough, deputy Ava Marshal, this week is under bond on two charges of selling liquor without state license or permit. McCullough’s rooming house, the old Meeker house on the corner of Benton and Ozark, was raided Saturday night by state and county officers with the result that the two charges were filed against him, and a third charge was made against Walter Bacorn, 40, arrested for operating a gambling room.

A suburb of Paris was plastered by Allied bombers in a raid on December 31. There are many German-operated war industries clustered around the edges of the French capital which makes the city a target.

The Ava Canning Company announced this week plans for canning tomatoes and green beans this year. Support prices, fixed by the government at $24.00 per ton for tomatoes and $80.00 for beans, will be paid.

To help save fat for the war, bake foods which you used to fry, like fish or pork chops. Brown them in a little fat, then set frying pan in oven and bake at a low temperature.

Work has been received here that PFC K. Donald Rippee and Corporal Joe Hobbs both from Ozark County, have met somewhere in England in a Red Cross center. They spent a few hours together talking over their school days together at Thornfield High School. Corporal Hobbs went across in September 1943, and Rippee went in November, 1943. They have plans to meet again in the near future.

Miss Vivian Uhlmann, former teacher in the Ava school, now teaching at Yelm, Washington, writes an interesting letter of a trip to Mt. Rainier. Her letter was received by her parents Mr. and Mrs. Richard Uhlmann of Buckhart.

Thursday night last week, a group of Ava people were in Gainesville and attended the Gainesville High School junior class play which was given in the school auditorium. Included in this group were Mr. and Mrs. Charley Owens and two daughters, Wilma Jean and Maxine, Doyle Fred Owens, Lucy Elliott and Quinton Herd.

Miss Rose Cline who has spent the past three years as an employee in the AAA office in Ava left Thursday morning for Porterville, California where she has accepted a position as a bookkeeper in a dairy company. Miss Cline went to Midway to visit with her father, John Cline, before leaving.

Private and Mrs. Lloyd Lathrop announce the arrival of a new son on Friday, Feb. 25, at the home of his parents Mr. and Mrs. Steve Lathrop.

The house today adopted the conference report on the bill permitting soldiers, sailors and marines to retain their uniforms when discharged and allowing them five cents a mile for traveling expenses home.  The measure now goes to the president.

At the meeting of the Missouri Woman’s Committee, Council of National Defense, Feb. 4, 1919, it was decided to dissolve this organization as a business organization on Feb. 27, 1919.  The departments of Child Welfare and Patriotic Education will however be continued at least two months thereafter.  On July 28, 1917, fifty women registered for service, August 20, 1917, five hundred women registered to conserve food.

FACTORY NOTES –– We have received 100 pounds of New Stone tomato seed for this seasons use –– enough for 800 acres.

While loading ties at the Ava Tie Yards last Friday Floyd Fry fell from the platform leading from the ground into the car door and was pinned beneath a tie which crushed the bones in his right leg near the knee.  Drs. James and Ferguson set the broken bones and report his condition favorable.  Fry lives on Maple Street.

The Town Basketball team of Hartville will be here and compete in two contests with an Ava Team on Friday and Saturday nights of this week. the games are expected to be very closely contested, so anyone interested in basketball should not fail to seen them.

Miss Ethel Miller closed her school at Brushyknob Wednesday and returned to her home in Ava.

Deputy Sheriff Grant Eslick made a trip to Seymour Sunday returning with Jim Severn who has been wanted here for several months on charge of disturbing a religious worship at Silver Shade Church in Sept. 1917.

Two new divorce cases have been filed for the April session of Circuit Court to-date. They are Clella Mercer versus Sam R. Mercer, and John Stuttler versus Elizabeth Stuttler.

“Although John Barleycorn has lost his place in the sun,” says the Joplin News-Herald, “he has his moonshine still.”

The city council of Willow Springs has purchased a 12-acre tract adjoining that thriving little city for a city park. The council donated $500 and the citizens collected $700 more.  A baseball ground, swimming pool and buildings for an annual fair will be erected. The park will be lighted with electricity.

Deputy Game Warden Will C. Lohmeyer visited this section again this week. Mr. Lohmeyer is keeping in close touch with his work in Douglas County.

J. B. Swain was in Ava Monday and instructed us to change the address of his paper from Ava to Arno. Mr. Swain recently purchased the Robert Blair farm near Arno and has now taken possession.

Stone County believes she will get a railroad this year.

Forty cents is the best price paid for corn in Charlton County.

A Cowgill man pleaded guilty to stealing coal but the jury declared him innocent.

A party from Liberal shot rabbits till their gun barrels got so hot they had to stop.  They killed 123 bunnies.

The four insane asylums in Missouri have 2,011 inmates. Probably half this many insane are confined in the county poor houses.

A Trenton colt fell into a well. Fortunately, it took the prevention to fall tail first, kept its head above water and was rescued .

Noah Webster, who, it appears is now teaching school in Douglas County, was lately fined $1 and costs for whipping one of his young lady pupils.

There was a great snow storm in Missouri in February 1881, that has never been beaten since.

W.J. Fulton, of Rome, reports that there was a small riot at Rome on the 24, growing out of an old grudge existing between the Tabors and Richards of that place. The participants in the racket were James and Sherman Richards and Wm. and Clem Tabor. Clubs and rocks were freely used and as a result the participants were badly cut and bruised.

GOODHOPE –– James Davis met with an accident last week. While returning from a trial some wild animal mounted the fence by the roadside, scaring his horse so as to cause him to be thrown resulting his being badly bruised on the face and neck.

ARDEN –– Robert Swearingin’s baby got a bean in its windpipe several days ago. Mr. Swearingin took the child to Seymour to get it removed but so far the doctors have failed to relieve the child.

I wish to inform the public that I am just opening up a first class stock of groceries on the north side of the square in Ava, and when you come to town come in and see me before buying elsewhere. I will do you good. I will pay the biggest price for all kinds of produce.  M.I Meeker

The following marriage licenses were issued by Circuit Clerk Harlin since our last report: Noah Strunk and Martha Huffman of Norwood; John Burns and Cynthia Hall of Bryant.

The U. S. Government Chemists have reported, after an examination of the different brands, that the Royal Baking Powder is absolutely pure, greatest in strength, and superior to all others.

Chas. Ellrod, of Clay Township has sold his farm to a party from the northern part of the state for $1500 and purchased the Jacob Fegly farm in the same township.

Sheriff Hancock and his deputies are busily engaged in serving papers for the coming term of Circuit Court.

James Hall was before Esquire Snyder on Tuesday on a charge of felonious assault. The evidence not being sufficient to hold the defendant he was discharge.