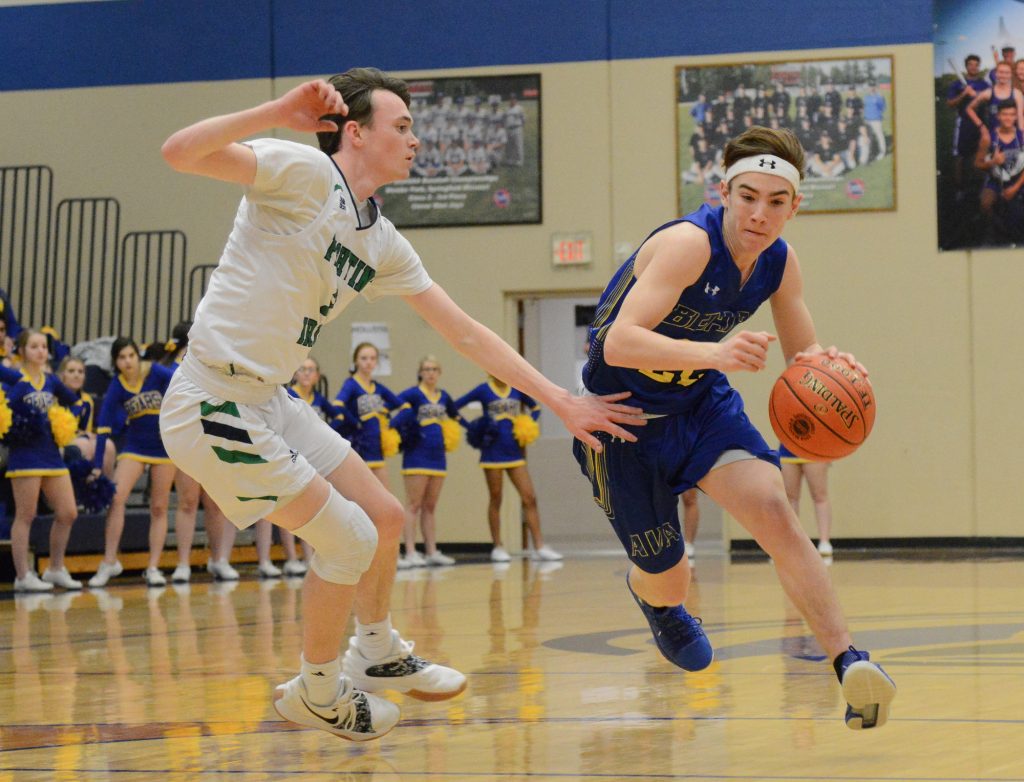 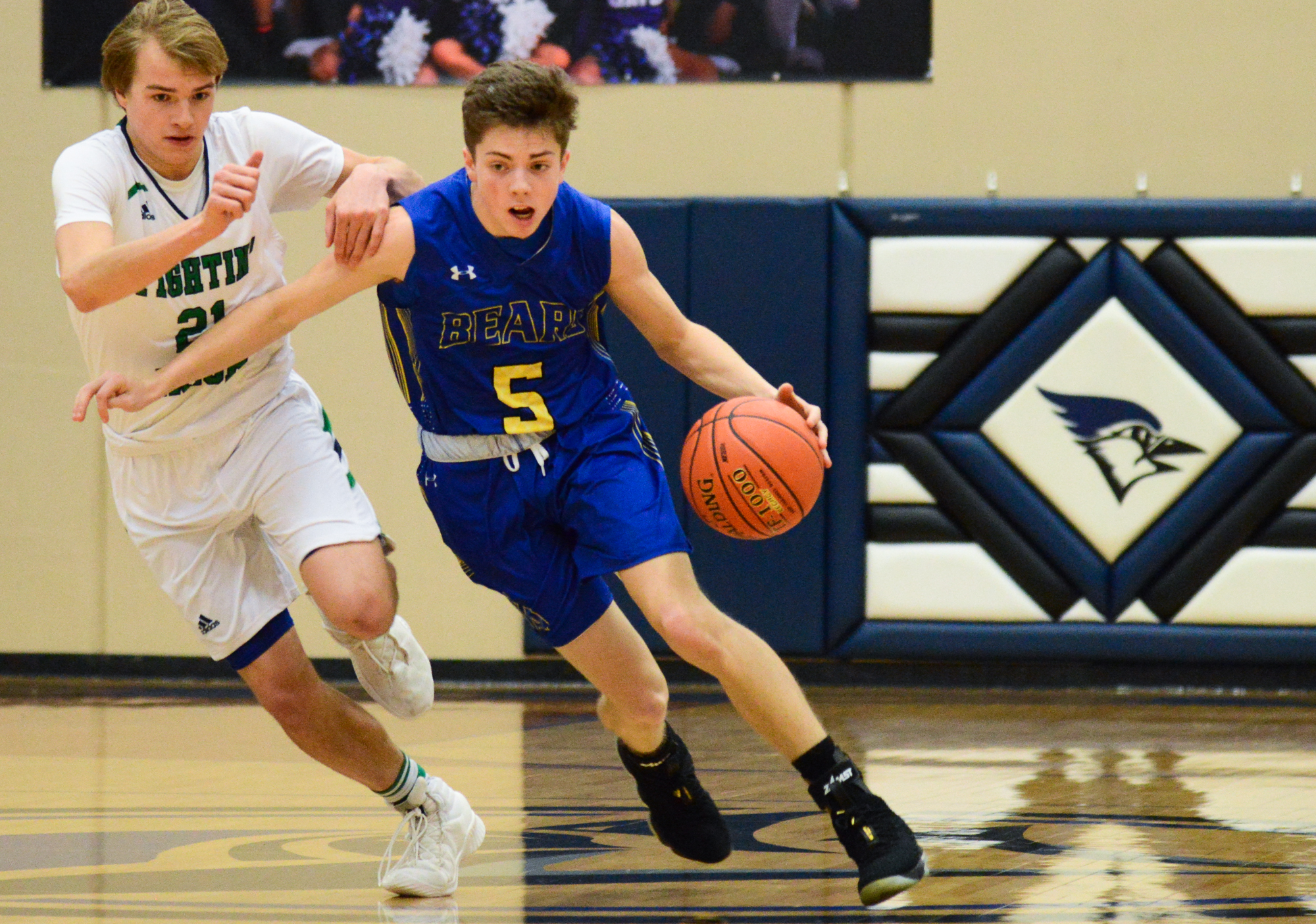 CLEVER – Much improved since the last time the Bears faced Springfield Catholic, Ava was able to hold off the Fighting Irish and keep their lead to 22 points. In the grand scheme of things, this is a great improvement for the Ava Bears when comparing scores and stats from the last time these two teams met.

The young core of Ava players got their first taste of Catholic during the opening round of the 73rd Annual Blue and Gold Tournament on the Missouri State University campus on Dec. 26, 2018. Ava was handed a 71-34 loss under the collegiate lights.

When the Bears go from a 37-point loss to a 22-point loss against the reigning Missouri State High School Activities Association Class 3, District 11 Champions, it does mean something.

Last time Catholic had their run of the court scoring 20-10, 19-9, 26-12, and 6-3 through four quarters against the Bears. This time around the Bears took on less water and were able to ease their loss to 79-57, and it could have been even closer had the Bears started-off on the right foot.

Let’s skip the 15-4 first quarter and talk about how the Ava Bears out-scored Catholic in the second, 18-15.

ONE VICTORY AT A TIME

Senior Caleb Johnson cracked-open the second quarter with a three in the same scoot, set, shoot move that is Johnson’s trademarked way of hitting the net from outside.

Blayne Mendel took a foul and gave a foul in the second and third minutes of the second quarter but later redeemed the foul with a steal for Ava.

He then split the defense and got the whistle against Catholic to refresh the Ava offense when they were running out of options against the Catholic defense.

Mason Cole, who did not play in the last game against the Irish, came up for three twos and several rebounds as an answer to the height and length Catholic players have.

The increased number of turnovers and hard-pressure play of the Bears showed in the final minutes of the first half when Andrew Dalton hit a three with 1:05 left and then came back with another answer for two with 23 seconds left.

An out-of-bounds call on Catholic gave the ball back to Ava, who took the inbound and gave it to Johnson for a half-court attempt, but the buzzer sounded, and the ball didn’t find its intended target. 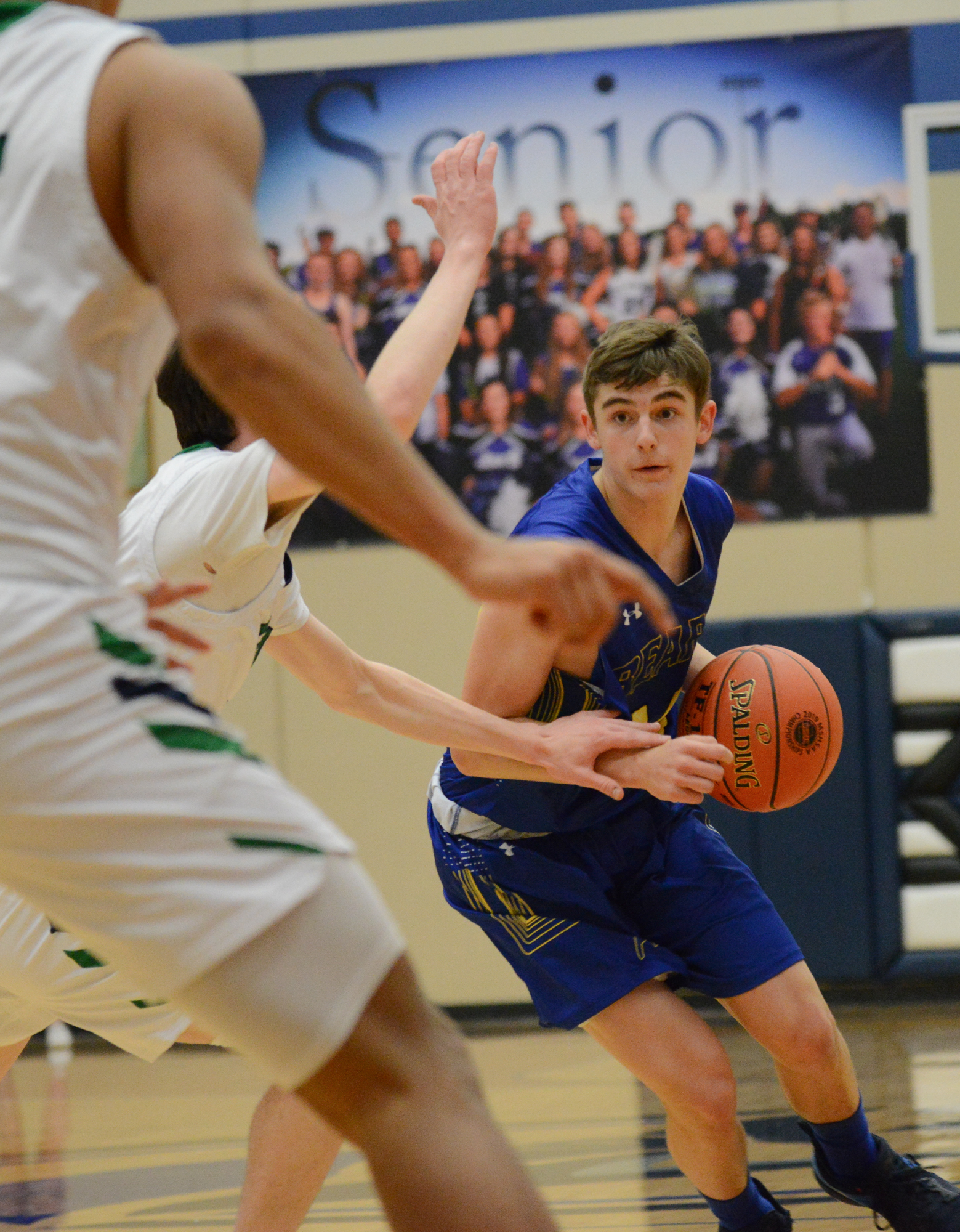 The Bears had worked themselves on the court and were within eight points of Catholic at the break, trailing 30-22. The silver lining here is the improvement, last game Ava trailed by 20 at the break.

Irish’s Charlie O’Reilly opened the third with two, answered by Blayne Mendel. Dalton caught a foul call giving Tyson Riley a trip to the line for just one but opened the game up to 11 points.

Blake King came open for three with 4:31 left in the period to close the gap back down to eight points.

On Ava’s next possession, junior Nate Swofford was called on a charge, adding salt to the no-blow in the second quarter when he took a solid charge.

Scoring 26 points over Ava’s 17 in the third, the breakaway had come to pass. Despite twos from Blake King, Swofford, Johnson, Mendel, and Dalton, Charlie O’Reilly came up with a bouncer into the bucket as the quarter expired and drew the and-1 right after Swofford had pulled two free buckets from Hunter Brown.

The final quarter went 23-15 for Springfield Catholic, Ava handing over the double bonus 40 seconds into the fourth. Blayne Mendel found himself in foul trouble, eventually having to sit the bench after his fifth in the final minutes of the game.

The final quarter took to the line where the Irish shot 10 of 11 on Ava fouls, which racked-up to 16 in second half. This gave the Irish 17 points on top of their regular scoring which led to the final loss in Ava’s final game of the season.

“Well I’m proud of them” said coach Mike Mallow. “I think they played hard. They tried to execute the game plan and they did really well on stretches. The only complaint is about the defensive rebounding and you got to give them (Catholic) some credit. I mean they’re big and strong and long and we’ve just had a hard time keeping them off the boards. I think that’s what the game came down to probably. You know that’s a close game if we can defensively rebound a little better.”

The boys will have a break, but some multi-sport athletes will be getting ready for the fast-approaching baseball season which starts with a jamboree at Springfield Catholic on Saturday, Mar. 9.

“We’ll meet here in the next couple of days and just visit about some things, collect uniforms and then of course spring sports start Monday,” said Mallow. “Then this summer we all will get together, and we’ll play several games, we get 20 days with them this summer. We’ll work on fundamentals and we’ll also play games and hopefully refine some things. We won’t change our style much but it’s always different when you pull a couple of parts out and it meshes back together.”

As for coach Mallow?

“There’s plenty going on with me,” said Mallow. “I’m going to rest the first couple days and after that I don’t know, but I do have a hot tub. Maybe I’ll just sit in that every night.”