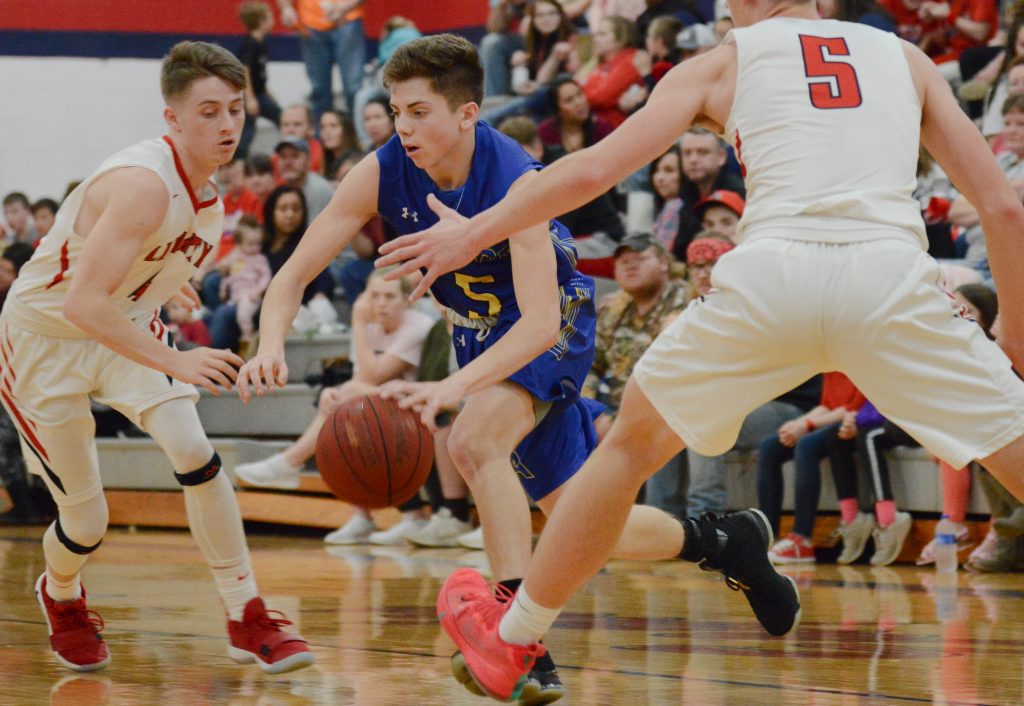 There is only room for one victor in a basketball game, and it sometimes comes down to a pivot in momentum during a short period of the game that decides its outcome.

The Bears traveled to Mountain View to play against the Liberty High School Eagles on Thursday, Feb. 14 and did well into the half, but things unraveled in the third quarter.

The first points on the board came from Ava’s Blake King and Tom Emerich for a quick sprint of five in the first 90-seconds of the game. The Bears went toe-to-toe for the remainder of the quarter with three threes and four field goals on top of three freebies given up by the Eagles.

At the end of the quarter and down by three points, Andrew Dalton saved the day with a buzzer-defying long-shot for three to tie things up at 20 in a first quarter which appeared to surprise the Eagles who may not have expected the pressure delivered by the Ava bench.

Blake King opened the second in the same fashion as the first, with a long-shot into the net to take the lead at the start of the second. Seconded by another three, the Bears pulled ahead by four, 26-22.

Two more threes from Blake King and Caleb Johnson sent the Bears on a six-point sprint, pushing up over the Eagles by seven with five minutes left in the half and forcing Mountain View to use a time out to regroup.

With 4:38 left in the half, a four-footer from Drake King ricocheted back onto the court, but no Bear was ready for the missed shot by the senior. Things seemed to start going afoul for the Bears from there.

Nate Swofford caught the whistle on a walk turning over the ball to the Eagles. Ava caught a break on an offensive charge call against Liberty’s Bradyn Kenega but wouldn’t be able to capitalize on the chance when back-to-back twos from Kenega and Andrew Holden would give the Eagles the go ahead score to lead Ava 34-32.

With a minute left, Emerich put-in two to break the Eagles’ rally, but later gave up a turnover. Kaden Bruce was able to draw a foul and sink one more for the Bears, but the Eagles had pulled ahead 37-35 with six seconds left on the clock… or so we thought.

One of the game’s officials removed five seconds from the clock, perhaps due to a late start by the officiating table. Contesting the amount of time taken from the Bears coach Mike Mallow advocated for his team, but the ref had heard enough after being heckled by the Ava fan base.

The inbound went to Dalton who sent the prayer at the buzzer with no avail. Down two, the Bears still had a foot in the game.

Swofford became open on the left wing early in the third, as soon as he had the touch it was off to the rim. The ball appeared to have what it needed to make it, but physics robbed him of the Bears’ first points in the second half.

The Eagles went on a ten-point run in the second and third minutes of the third without an answer from the Bears, leading Ava 45-35. Back-to-back twos from Blake King and Swofford helped close it back up to a six-point gap but a three from Liberty’s Landen Cooley opened it back up to nine.

“It’s a game of runs and they played better in that stretch and they made some shots,” said coach Mike Mallow. “We came out and I felt we were stagnant on offense (while) they play a matchup zone. When they do that you’ve got to be willing to put the ball on the floor and attack it a little bit to create some plays and we kind of stood around with the ball a little bit.”

Swofford answered Cooley for three but a with bad pass from Blake King, a block called on Swofford and Dalton getting robbed by the physics behind a leather ball and steel rim… things just weren’t adding up for the Bears.

The Bears would get a small break, chiseling-down the Eagles’ lead to 48-44, when Dalton pulled a foul and sank both buckets to close the gap again.

Liberty’s Karis Acklin put-in three and started an all-out attack against the Bears, pulling away from Ava by ten points after Kaden Daniels drew a foul and hit both freebies to make it 58-48 for Liberty.

“They switched to a half-trap and we just didn’t handle it very well,” said Mallow. “It was something we prepared for. We worked on it for quite a bit yesterday and they got the hand on some passes. When they got us trapped in the corners and hurt us, it wasn’t by surprise. We just didn’t do a good job executing against it. I thought I had it ready to go but I’ll take some heat for that. Obviously, we didn’t execute very well against it.”

With less than a minute left, Emerich made a clutch save on a ball going out-of-bounds, leaping out and sending the ball back in. The move led to Blake King going up for two and getting the and-1.

30 seconds left, it was Ava’s ball and Blayne Mendel attempted to drive the lane but had the ball knocked loose. Emerich came up with a steal and pass to Johnson.

Tripped up on the sidelines and unhappy with the officiating, Johnson gave up a technical to the Eagles who sank one more to keep it ten-between, 61-51.

After a 24-16 third quarter which led to a ten-point deficit, the Bears needed to put in the work if they had a chance to get the knot or go-ahead in the fourth quarter.

Blake King came about for two shots, giving Ava a four-point swing early in the fourth.

“Blake (is) one of the (kids) that most people say is really scoring with the ball,” said Mallow.  “I’ve always felt like he could do that. I’m prouder of his defense. He’s getting better and that really keeps him on the court longer and thus the more offensive production. So, I’m excited about the future. I think we’ve got a good, young core. Of course, we’re going to miss our seniors, you always do. I think we’ll be moving forward and just keep getting better.”

Andrew Dalton drew a foul for two more followed by another trip to the line by Blayne Mendel making it just a five-point game two minutes into the fourth period.

Dalton, who faced heavy defense, played some of his own to break-up a lob into the paint and forcing the turnover. The possession led to Blayne Mendel coming open for three, capping-off a seven-point run to make it a two-point game at 65-63 with the Eagles ahead.

With 4:48 left in the game, Swofford got the walk called on him turning over the ball to Liberty and negating what would have been a tying shot for the Bears.

The call appeared to have hit the Bears hard with Dalton fouling Colten Foster for two free points, kicking off a 14-point run by the Eagles to solidly lay claim to the game.

In crunch-time, the Bears still fought but had a walk called on Bruce as he tried to split the defensive trap. The turnover led to two from Liberty’s Holden and the Eagles starting to drag out the clock.

Blake King pulled a foul and a turnover leading to three from Swofford to cap the Eagles at 82. Blake King would get a block from Holden, who fouled-out in the last 25 seconds of the game.

King sunk two to shore-up Ava’s score to 70 points, 12 shy of catching up to a late-game rally by the Eagles who took the cake on their senior night, 82-70.

The Bears finished the regular season with an overall record of 13-11 and 5-3 in the SCA. The young core of players has learning and maturing ahead of them but show great promise for the 2019-2020 season.

Players to keep an eye on are Blake King, whose defensive improvements have led to more time on the maple, meaning more buckets from the wings. Andrew Dalton has a career 381 points in the Herald’s unofficial book, which does not account for all games played this season. Kaden Bruce will likely continue to lead the Bears from the key, setting-up play action and swinging the ball around the defenses the team faces next year.

“I always appreciate our fans,” said Mallow.  “There’s a bunch up here tonight, it was an early start, and we weren’t supposed to play till tomorrow. Yet I look over and there’s a lot of blue here, so we appreciate those guys following us and helping us.” 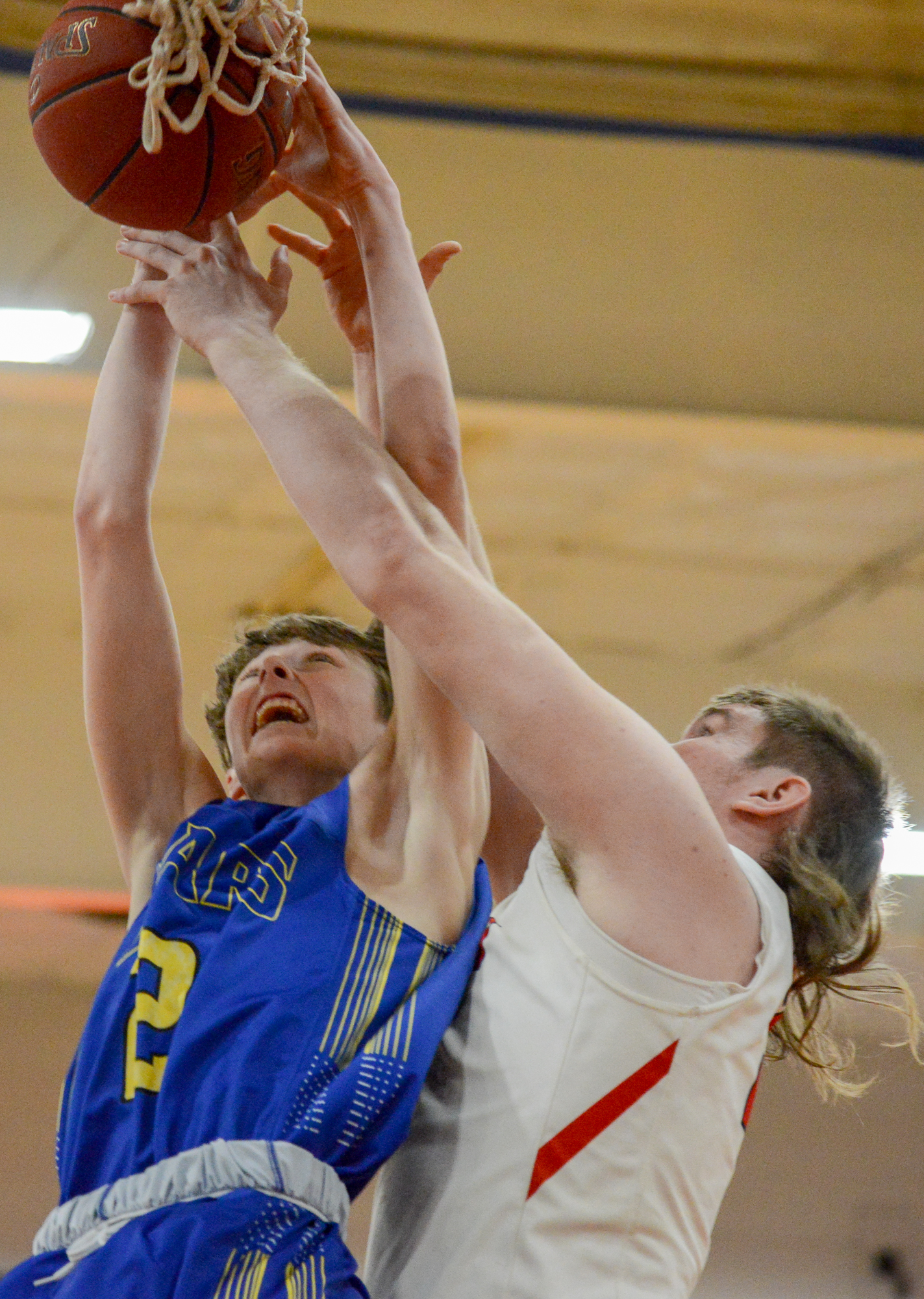