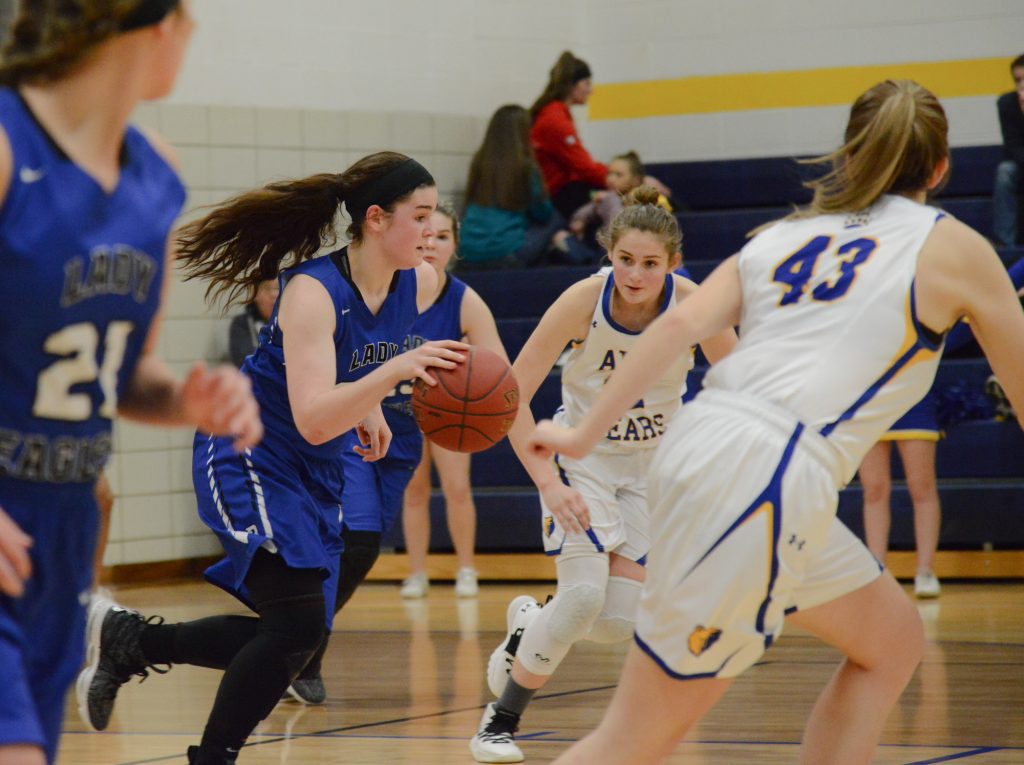 Bradleyville's Gracie Shipley, with ball, dribbles the ball down the court during a non-district, non-conference game against the Ava Bears on Thursday, Feb. 7, 2019. The Lady Eagles topped the Lady Bears, 54-43. (Jason Hoekema/Douglas County Herald)

They say that first impressions leave a lasting mark, and that rang true for the Lady Bears after Bradleyville tore open the Thursday, Feb. 8, game with a 23-14 first quarter.

The Bradleyville Lady Eagles started the game off on the wrong foot after Maddie Shipley was called for a walk, giving the Lady Bears the ball and a quick five-point sprint in the first minute of play.

At 5:46 left in the quarter, the Lady Eagles started turning things around with a six-point sprint to take a small lead over the Lady Bears. Claire Fossett pulled a foul and picked up an extra point to tie it up at six, but a late-quarter burst of eight points split the score from a tie at ten points, and Bradleyville took-off from there.

With eight field goals and shooting 77-percent from the stripe, the Lady Eagles made 23 on the Ava defense, causing a nine-point deficit that the Lady Bears were unable to make up the rest of the game.

“I told them before the game started that we have got to work on (having a good first quarter),” said Bradleyville Coach Autumn Thomas. “We have had a tendency to come out sluggish in the first quarter. So, I told them we have to start having good first quarter and I just try to get them fired-up in the locker room. I think the last two or three games we’ve done really good.”

“Well we didn’t rebound the ball there in the first,” said Houk. “When I called the first time out, they had 12 points total and they’d scored eight of them off of offensive rebounds. We weren’t blocking out and we let them out-hustle us, we didn’t get to some loose balls that we should have.”

27 points from the Bradleyville front-woman. Gracie Shipley was a force which could not be contained by the Ava defense. Comfortable with approaching the bucket from either side, the senior was either making the bucket or drawing the foul in her attacks.

“We didn’t have an answer for her,” said Ava Coach Nathan Houk. “We tried to double-team herat times and were late getting there, so she scored on us. We were trying to get around her on the post, front her, and use weak-side help but neither one of them worked. She played an outstanding game, but we shouldn’t let her get twenty-seven (points) on us. We should have done a little better job on her defensively.”

Shipley scored four field goals in the first quarter and pulled an additional four for 12 of the Lady Eagles’ 23 first quarter points. In the second she was limited to just one point in two trips to the line but returned in the second half to put-in another 14 points.

“We try to run an offense where she is not out on the guard position very often,” said Thomas. “She stays in low and if she’s one on one we try to just get it to her because she is really good down there right handed or left handed on the either side. She’s either going to make it, get fouled, or make it (with) an and-1.”

Rebounds are important regardless of the possession. It gives the rebounding team a shot at their bucket. When players are having difficulty getting the ball away from the attacking offense, the other team can take two, three, or more shots until they either make the bucket or draw the foul.

Several of the Lady Bears found themselves out of position and watching the ball bounce back into Bradelyville possession time, and again. This coupled with vital Lady Eagle steals made from the Ava offense, was part of the Lady Bears’ demise.

“We weren’t boxing out,” said Houk. “Against a big team, you’ve got to box out and rebound the ball. If you stand there and try to jump with them, they’re going to have the advantage because they were taller than us. You can’t you can’t let them just crash-in with their own offensive and get every missed shot and put it back in the basket. You have got to box them out.”

The Ava Lady Bears had put themselves in a bind. Even after cutting Bradleyville’s lead from 13 to nine before the break, the Bears 20 second half points didn’t top the Lady Eagles’ 22 to split the final by 11 points.

The Lady Bears missed some opportunities by making a steal but failed to convert it into points on the other end. With 1:26 left in the third the Lady Eagles lead 44-31 and after getting the rebound, the buzzer would sound on Hanna Evans to end the period.

“You can’t put yourself in that kind of deficit against a good team like that,” said Houk. “We came out the second half and played harder and had got in a position where we had the press and got some got some turnovers. (Then we) went stale on offense and didn’t get the ball in the basket on some possessions where we had a chance.”

Ashton Bewley made six points in the third but was stopped repeatedly in the paint and had to settle for one three and another three freebies in the fourth.

Lauren Mendel found herself in deep coverage through the game, limited to just two points.

“They were packing-it in on Lauren in the post,” said Houk. “We were trying to get the ball on the baseline and spread them out a little bit to get the ball inside, but they were just double-teaming her and (didn’t) allow us to get the ball there. “When a team packs it in on you and play a zone, eventually you’re going to have to knock down some outside shots and unfortunately we weren’t hitting well from the three-point line.”

With 3:22 left in the game Ashton Bewley made one last appearance at the free throw line after pulling a foul from Bradleyville’s Zoie Sims. Lined up and toeing the line she let one go up and through the net.

Ava’s leading varsity scorer made her 1,000th career point, and at a home game no-less.

Ashton Bewley delivered 19 points against Bradleyville, Eden Little made eight, and several twos from across the bench including a fourth quarter bucket by freshman Julia Henry. The Lady Bears shot a collective 69-percent from the free-throw line, making 11 points. Claire Fossett was credited with an assist on a steal handed-off to Eden Little for two. Even with 13 twos and a couple threes, it just didn’t add up for Ava.

Gracie Shipley delivered 27 points over the Ava defense. With eight field goals and shooting 11 of 19 at the stripe, she was a difficult opponent to match-up with on the court. Tay Sims delivered nine points, but also fouled-out in the fourth. Sims was also credited with an assist for a scoring pass to Zoie Sims in the second quarter.