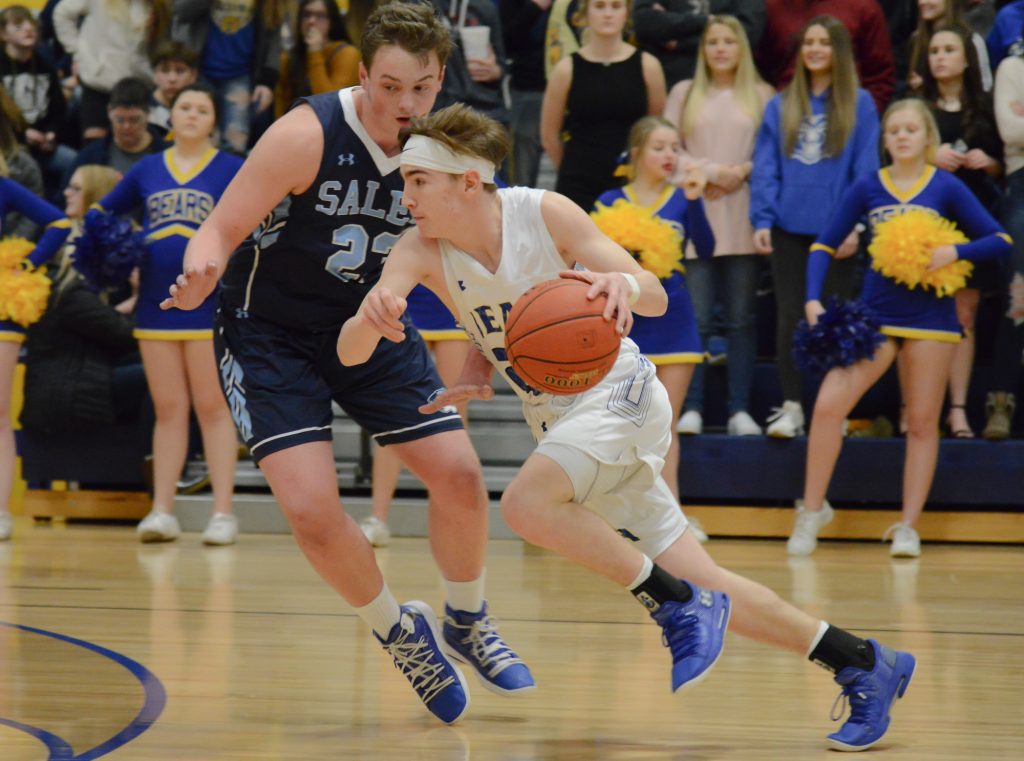 Ava High School's Blayne Mendel (22) drives past Salem defender Carter Chilton during a non-district, SCA Conference game on Friday, Feb. 8. Ava came up from behind in the fourth quarter for the win. (Jason Hoekema/Douglas County Herald)

From Behind 10, To Ahead 10. Ava Tops Salem at Hoopcoming

This very much sets the mood for the rollercoaster game Ava and Salem were playing on Friday, Feb. 8 as both teams were establishing their own cause and effect in a turnaround outcome for the Bears.

It being Hoopcoming Night for the Bears, they needed a change in game play to win the important home game. Tom Emerich was named King during the pre-game celebrations.

With the celebration, seniors Drake King and Emerich missed some of the pre-game routine. Consistency being an important aspect of athletics, Mallow believes that the festivities may have affected players’ focus.

“I just don’t think we were very sharp,” said Mallow. “Some of the kids missed some of the pre-game because they were actually in the ceremony. We don’t want to use those as excuses, but I do think they caused a slow start. Give Our Kids some credit. They fought through that and kept playing and we came out victorious.”

The Bears opened up well enough for a normal basketball game but were quickly put in a five-point rut after the first quarter. Blake King lead the Bears with five points in the first, scoring both inside and outside the arch. Even with another 12 points from Tom Emerich, Nate Swofford, Andrew Dalton and Drake King the Salem Tigers were on the prowl and kept the Bears behind them in a chase to the final buzzer.

Less than 15 seconds into the game, Blake King delivered five for the Bears. However, the Tigers were quick to answer and more as Ava made some turnovers but later lost the ball on bad passes or travel calls.

Not for lack of trying, but the Bears just weren’t going to top the Tigers in the first half. Even with Nate Swofford returning after an ankle scare to taking a charge for his team and Caleb Johnson flying onto the stage trying to get a stop, the Tigers lead 22-17.

Five points wouldn’t normally be a concern other than the tone set for the remaining quarters, but the Bears were finding stops and turnovers forced by the Tiger defense. Even after a three pointer from Johnson, the Bears didn’t shake the five-point lead the Tigers held.

With 4:20 left in the half, Dalton got a fast break for two points, then grabbed a rebound and made an assist with a pass to Emerich. Into the last minute the Tigers lead by ten. Blake King delivered a three to choke it back down to a seven-point hole, but Swofford would get the whistles blown at him as Dawson Conway went to the line to shoot.

Conway made one of the shots and the ball went back to Ava, but another turnover would lead to Carter Chilton scoring two to make it 10 ahead for the Tigers at the half, 42-32.

“Well I think you know first of all you got to give them some credit,” said Coach Mike Mallow.  They hi-lowed us to death (and) we didn’t do a good job getting weak-side help on that but some of it’s just all the distractions.”

“I told them I felt like we were the better team and that we would win but we had to quit making the mistakes we were making,” said Mallow about the halftime regrouping. One of the things we talked about was (having) three on twos and two on ones and (we) threw the ball to them in the first half.”

11 fouls in the first half cost the Bears ten points at the line and the Bears needed to turn the whistles on Salem to make those points back in the second half after giving the Tigers an early bonus with 4:59 before the half.

The Bears made a better presence in the third, scoring 21-18 over the Tigers to shorten the gap to seven. Nate Swofford made ten points on his own, sinking two threes and getting a two. Swofford shot 100-percent from the line Friday evening, making six points on the Tigers’ charity.

Dalton was held to just five points in the third, but the Bears had picked up the bonus with 55 seconds left in the period… and the effect needed to change the outcome of the game.

The Tigers’ Jordan Shults scored 24 points in the first three quarters, but his game went silent in the fourth. Comparing lead scorers, Dalton was getting held to five points per quarter, and that needed to change.

“We started switching everything on the back side,” said Mallow. Usually Andrew was the guy that ended up down there, two or three times they tried to lob it in like they had earlier, and (Dalton) stole the ball. Then they got a little tentative trying to lob at (Shults), but we had help there anyway so I think the fact that we got our weak side help figured out and settled-in helped us to slow him down.”

Dalton opened the fourth with a field goal, followed immediately by a successful one-and-one for four points, closing the lead to three. With 6:51 left in the game Dalton came up with a steal, sprint, and layup for another two to get right on the Tigers’ heels, 60-59.

Salem answered with a two but were hushed by a three-pointer from Emerich to tie the game at 62 with six minutes left.

“We needed to slow down enough to execute,” said Mallow. I felt like late in the game we slowed down a little bit and executed you know. We try to play fast and that’s all good, but fast and hard to control are two different things. You play as fast as you can but still execute. I think we got back in that sweet spot.”

The next offensive play from Ava would be in the form of a cross-court pass from Johnson to Swofford who didn’t make the shot but drew the go-ahead foul points for Ava.

The Tigers’ Logan Chilton was able to draw a foul on the next possession but missed both shots at the line. Dalton rebounded after the second toss and drove it all the way across for two more points to make the score 66-62 for Ava.

Getting tired and frustrated, the Tigers got a walk called on them for another turnover. Blayne Mendel tossed the inbound to Dalton who was fouled by Reese Dodson, his fourth.

Some senior leadership emerged with Johnson shouting at the younger players, telling them to take it easy. An echo of what Mallow said he talked to them about during the break.

The whistle wasn’t helping the Tigers at this point in the game despite Ava giving them the bonus in the fourth.  Only two trips for two points would add into six from Reese Dodson for a total of eight fourth-quarter points.

With Dodson and Hayden Wilson fouling out, and Shults going silent, the Bears had the go-ahead to climb out of a ten-point hole and dig one for the Tigers.

The Bears out-scored the Tigers 46-26 in the second half for a come-from-behind, 78-68, win to live up to Hoopcoming’s theme, “The Greatest Show!”

Nate Swofford took a nasty fall in the Feb. 5 game against Houston when he was fouled during a layup attempt. Falling on his left ankle, he was questionable against the Tigers on Friday.

He made his appearance in the first quarter and played minutes through the rest of the game while he stacked up 19 points for the Bears’ offense.

“Well I’m proud of him,” said Mallow. “You know, he’s a tough kid. I thought he was 75 percent yesterday in practice. We watched him warm up thought he looked okay. He looked fine as we went through the game. You’re more likely get hurt when you’re tired. , so I made sure that we subbed for him a lot. When we got in that room where we were playing really well, I didn’t want to sub because it just seemed like we had everything like we wanted it. (Salem) kept calling time outs (and) it was giving us the rest we needed.”

Dalton delivered 28 points, Swofford made 19, Emerich with 11, Blake King with 9, and Johnson and Drake King with a combined 11. The Bears made 17 field goals, seven threes, and shot at 82-percent for 23 points at the charity stripe, helping them up and well-over Salem.