Miriam Rasch is the winner of the 10.1 cubic-foot Whirlpool refrigerator at Town and Country Supermarket.  Larry Johnson, store manager, made the presentation.

Trish Hall, kindergarten instructor at Ava Elementary, has been elected to the Kindergarten Advisory Council steering committee for 1993-94. Trish will serve as Program Chairperson.

PFC William D. Wisner, Jr., has completed training for the 91B10 combat medical specialist course at the U.S. Army Academy of Health Sciences, Fort Sam Houston in San Antonio, Texas. PFC Wisner is the son of Bill and Vida Wisner of Ava.

This Monday has been nice, well into the fifties.

FOX CREEK –– Kelly Dobbs was home from college over the weekend.

A small arsenal of weapons and ammunition were recovered by officers in a residence here Wednesday morning following a burglary at the Davis Midwest Auto about 1 a.m. Monday. Conducting the investigation are Cpl. Bill Davis and Tpr. James Moore of the Highway Patrol, Sheriff Troy Hancock and Deputy Ed Riley, and City Marshal Ezra Henson.

Dr. Marl Kilgore, president of Zions Order, Inc., announced his resignation this week as president of the organization after holding the position some 15 years.  Mr. Kilgore who remains as a member of the board of directors, said, “I feel a calling from the Lord to work with The Word of God, Inc., at San Fidel, New Mexico, as a missionary to the Navajo Indians.”

Jim Thurman, former manager of the Town and Country Super Market here, announced this week that he has purchased the Delp Bros. Grocery Store in Gainesville.  Mr. Thurman said the grocery store, located one-half block north of the square, will be remodeled and expanded and will be known as Jim’s Super Market.

The Ava High School band students have been selected through auditions held at Cabool Feb. 1 to be members of the SCA Conference Select Band, it was reported this week by Kenneth Wagener, high school music director. Larry Haynes and Arliss Stillings won positions in the saxophone section, Ana Duran in the French horn section, and Jim Huffman in the tuba section.  Mark Musick was selected as the outstanding cornet player in the auditions and will occupy the first chair in the first cornet section.

Army PFC Lendell J. King, son of Mr. and Mrs. Wendall King of Ava has completed basic training at Fort Leonard Wood and has been assigned to the infantry division at For Ord, Calif.

A birthday dinner given in Seymour Thursday, Jan 30, honored Peter Buchanan who was celebrating his 99th birthday.

For Douglas County veterans and their dependents, there is good news this month.  Under legislation passed by Congress last year, they will be getting bigger compensation checks than ever before.

Rev. and Mrs. Clark Lambert will observe their 50th wedding anniversary Feb. 13 with open house at Evans Church, Sunday, February 9, from 1 to 4 p.m.

GOODHOPE –– Miss Brenda Brown who is attending school in Kansas City visited Sunday with her sister and fmaily, Mr. and Mrs. Mitchell Peebles, Mike and Michelle.

John W. Cataldo, of Medicare Rexall Drug of Ava, was among more than 100 pharmacists from several midwestern states who attended a one-day continuing education program at the St. Louis College of Pharmacy of January 23.

Omer J. Twitty, son of Mr. and Mrs. Oliver Twitty of Monett, was reported missing in action in Italy Jan. 5, according to a telegram received by his parents Jan. 29. The last letter they received from him was dated January 2 and stated that he and Fred Lathrop and Robert Spurlock were together, both of whom are reported missing also.

WASHINGTON, D.C. – Raymond Clapper newspaper columnist and radio commentator, was killed in a plane crash while covering the new U.S. Operations in the Marshall Islands.

Pettit Theatres –– At the Star, “Trail Dust” with Hop-A-Long Casidy, one of William Boyd and “Gabby” Hayes that you will never forget.  “Above Suspicion” with Joan Crawford and Fred MacMurray in a Honey, a love story, expertly told and well acted.

BRYANT –– L. C. Casida and J.C. Odle are working on the cemetery at Mt. Everett this week.

DENLOW –– The bond rally at Denlow was well attended.  The school furnished a short program with Melvin and Merle Kutz playing some music on guitars. Mr. Lichty and Mr. Clubb gave talks. A total of $1,800 was taken in.  Mint Springs raised their quota but Denlow was short.

STAR –– Ed Burris has sold his property at Sweden to Harry Kelley.

RANDOM SHOTS – I heard someone say last evening on the radio that marriage was like a prize fight. The preliminaries were so much pleasanter than the main event.

EAST VANZANT – Mr. and Mrs. Howard Ridenour received a letter from Mr. Ridenour’s nephew, Lester Brooks, who is in the war zone in the southwest Pacific.  He stated he had delivered packages of bombs all day Christmas Day to the Japs. He is a gunner on a bomber.

A number of relatives and friends gathered at the Bedford Burks home west of Dogwood Sunday for a farewell dinner, as the family is moving to Sedalia.

Three out of every four eggs to be produced in 1944 have been allocated to civilians, the war food administration has announced. The anticipated supply of eggs this year, possibly exceeding 61 billion, is based on the potential production of the greatest number of laying hens on record in the United States. 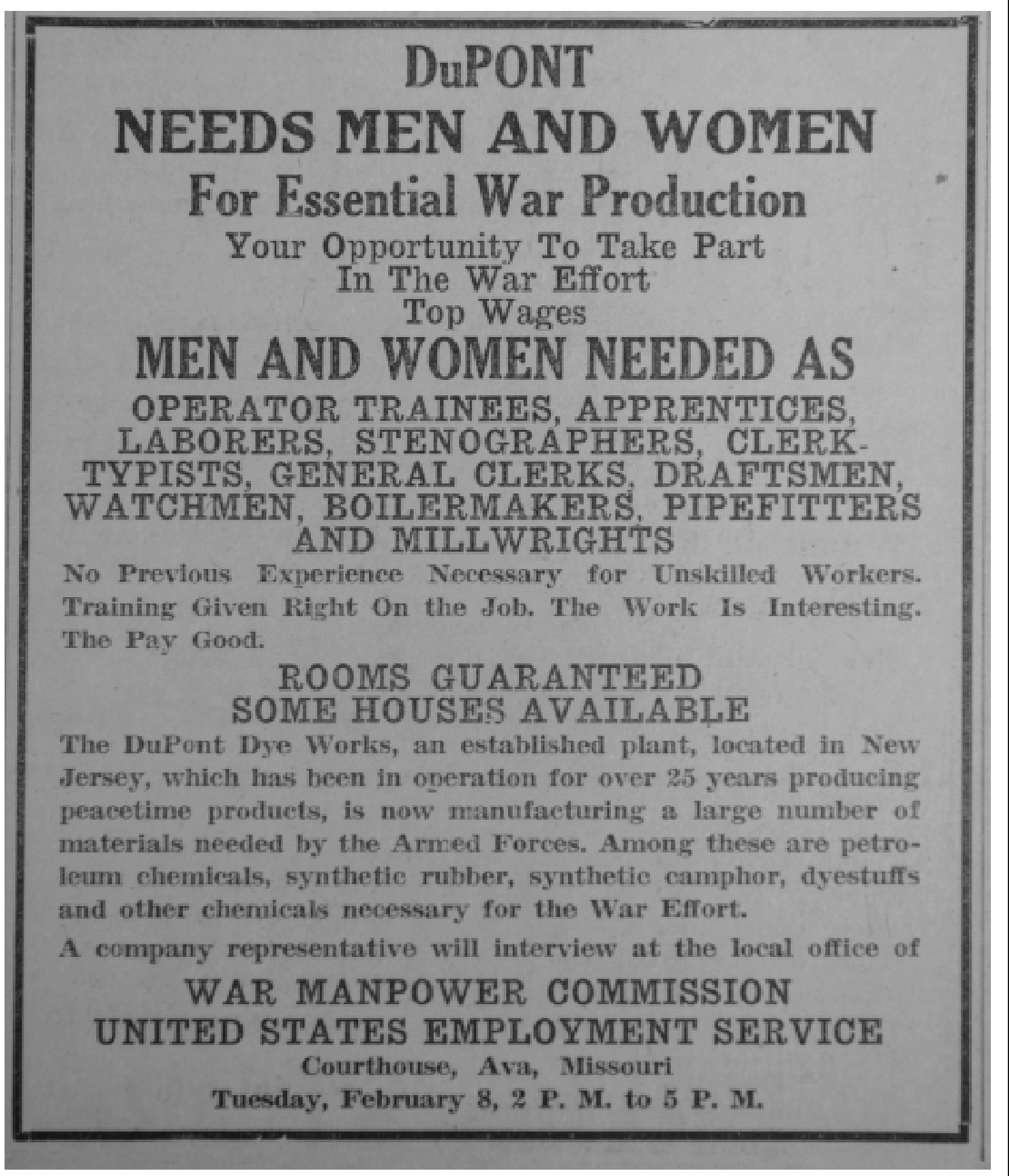 The largest snow of the season mantled this section of the Ozarks during the first part of the week, but did not last long.

A delegation of citizens of Howell County appeared before the County Court in West Plains last week and asked the court to make an appropriation and buy a pair of bloodhounds for the use of the sheriff of that county in trailing law breakers.

Tony Jenkins of Pontiac, Ozark Co., passed through Ava Monday on the way home from Camp Dodge, Ia., having been discharged  from the Army.

Let us hope that none of our citizens will suffer with “shell shock” when eggs drop down to where we can again have as many as two at a meal.

We’ll bet it won’t be two years before you will hear an Ava man bragging about how many miles he can get on a gallon of gas with his aeroplane.

SCHOOL NOTES –– Mr. Lawrence Croslin is now a student in the Ava Schools. He entered Monday of this week. Both boys and girls basketball teams will go to Mansfield, for a match game with that school Friday night of this week. The Yellow Jacket will make a special trip for this occasion returning the same night.

Henry Klineline of Ava made known this week the terms of a boys corn growing contest which he proposes to conduct this year in Benton Township. Mr. Klineline is offering $17.50 in prizes in connection with the contest. Ten dollars will go as first prize for the boy who raises the ten best ears of corn. Five dollars will be given for the second best five ears, and two dollars and fifty cents as a third prize.

A fine baby boy arrived at the home of Mr. and Mrs. C.E. Norman on Ozark Street this a.m.  Mother and babe are doing nicely. Mr. Norman is a member of the Norman-Gentry Drug Co. of this city.

Sam Robertson of near Tigris brought two red fox pelts to Seymour last Friday and sold them to S.E. McClure, a local produce dealer for $14 each.

Boone Norman arrived in the city Sunday having been discharged from the Army.  Boone was in the signal corps and had just landed in France when the armistice was signed.  He visited Paris and several other places of interest including the scene of battle.

OAK FOREST –– Mrs. Will Anderson presented her husband with another girl this week and Will is disappointed in not getting a wood chopper. This is their 5th girl.

The worst blizzard ever known in Kansas City visited the town yesterday.  By morning there was a foot and a half of snow on the ground, which is a record breaker for the city.

It is reported from Perry, OK., that Bill Doolin, the outlaw leader, is dying from gangrene caused from a wound received in a fight last June.

The law of Missouri prescribes that jurors shall be “sober and intelligent.”

Mrs. Haviland of St. Joseph claims to have invented a fly trap which will do the work.

John North of Carroll County, Mo. chopped off two of his toes, but sewed them on again himself.

Mountain Grove Academy has 350 students from Arkansas, Kentucky and eight counties in Missouri.

The Cedar Gap ghost has been captured. It has an ingenious contrivance made principally of strings and spools.

One hundred and fifty thousand dollars worth of Spanish jacks lately landed in New York. Their destination was Missouri.

The young ladies of Drury College will erect a building at the school grounds in Springfield in the spring, it will cost $20,000.

A Maryville man has not missed a meal in 25 years and says he has not sworn in 15 years.  Probably the cooking has been satisfactory.

Camels are not like horses. If a horse does not want to do anything we make him.  If a camel does not want to do anything he leaves it undone.  No amount of coaxing, no amount of cruelty will make him budge.  He has the determination of a mule combined with the strength of an elephant. A camel is one of the most aggravating brutes which will drive a hot-tempered man to distraction.

Man waits on women before the wedding, but she has to wait on him later.

J. M. Weaver, formerly of Case Township, was in our city on Tuesday paying taxes. Mr. Weaver sold his farms in Case Township about a year ago and has been looking for a better location, but failing in that, has returned to Douglas County,

Lath Ray of Clay Township, was in town this week looking after the collection of his insurance policy on his barn which was recently destroyed by fire.  His policy was issued by the German Insurance Company of Freeport.  There is no question but that the loss was much more than the amount of the policy but this company is becoming notorious in its failure to pay loses or adjust them unless they can dictate their own terms.  Mr. Roy has commenced suit against the company and proposes to compel them to pay the policy.