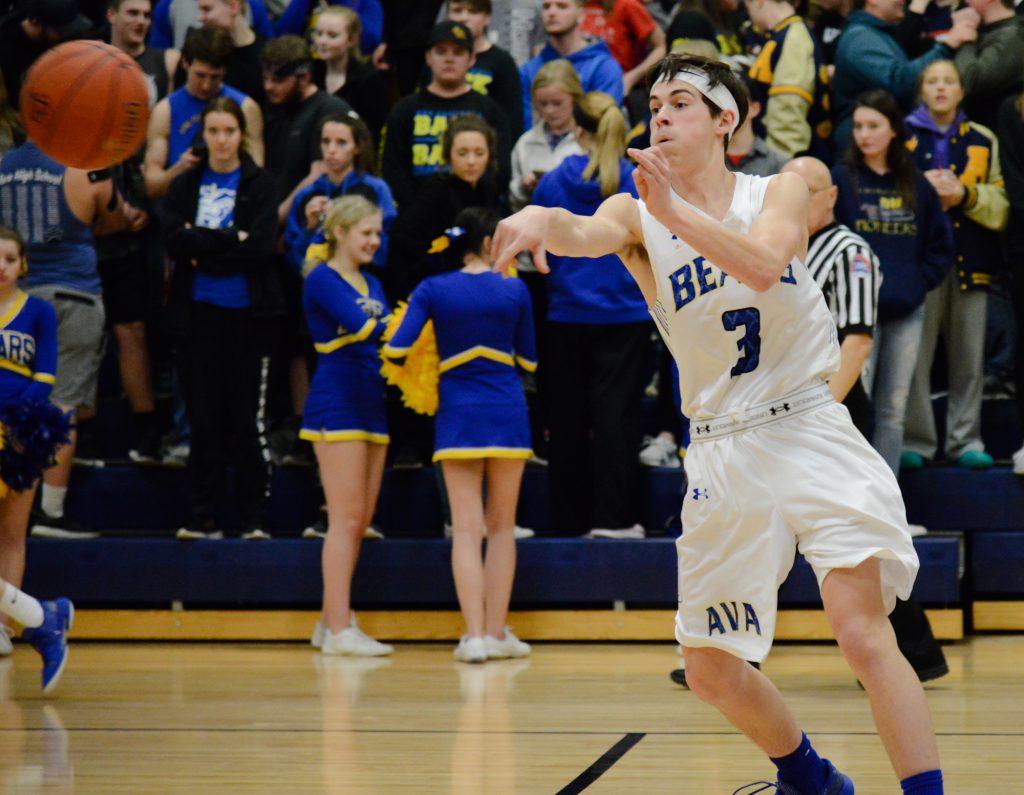 Senior Tom Emerich (3) makes a cross-court pass to a teammate during an SCA Conference game against Cabool High School on Tuesday, Feb. 12, in Ava. Tom is one of four seniors who played their last home game with a win over the Bulldogs. (Jason Hoekema/Douglas County Herald)

Like the girls’ game on Monday, the Ava Bears boys’ basketball team took to the maple strips one last time at home. Tuesday marked the last time four seniors would ever play a sanctioned game on the court they have practiced and played-on with their family of friends and teammates.

Also like the girls’ game, the Bears came out victorious to make their seniors’ night that much more memorable.

Coming off of a big, 78-68, comeback win over Salem on Friday the Bears took to the court, starting Tom Emerich, Caleb Johnson, Drake King, and William Mork; all seniors playing their final minutes in Ava.

“I wanted to give the seniors a chance to kind of go out together,” said Coach Mike Mallow. “So, they all started. The problem there was (that) we didn’t have a point, we didn’t have a two, and we had two or three guys (playing) the same position. It got us off to a little bit of a sluggish start.”

With senior night games comes the change in pace with the graduating players taking to the court to open the contest. Teams develop special formulas, using specific players for specialized tasks to make one, five-person machine on the court.

When you put in an extra guard or change the point-man, things may not click as well as usual. This was the case Tuesday as Coach Mike Mallow decided to put his seniors’ first so they could have one last bit of game time together.

The first quarter came up with a tight 13-11 lead for the Cabool Bulldogs.

The first strike came from Matt Luerssen who drew the foul to put one on the board for the Bulldogs. Before that, Ava’s Caleb Johnson came up with a big play break-up and came through it clean, without a whistle.

Johnson quickly answered the single shot at the line with a resounding three followed by a resounding steal from Cabool on their next possession. The Bears couldn’t convert it into a basket and Cabool caught up to ties things at six.

Cue Nate Swofford with a three to break things up but was followed up by a run of seven by the Bulldogs to come up with 13 for the first. Andrew Dalton followed through with two, but the Bears couldn’t get the ball in after Cabool lost possession with 16 seconds left.

It wasn’t a bad quarter by any measure, the Bears’ Blake King, Swofford and Johnson all hit a three and Dalton came up with his first tally late in the quarter.

BACK TO THE FORMULA

Back to applying the press and rotating players to keep legs fresh, the Ava Bears went on a 15-point run to open the second period. 15, unanswered points until Cabool’s Trevor Atkins was able to squeak in for two.

Andrew Dalton could have had eight to his name in the second, but teamwork always prevails as he was credited with two assists on passes to Blake King and Blayne Mendel to get things going for Ava.

The Bears capitalized on turnovers starting with a rebound in the first minute of the quarter which lead to Blake King coming open on the arc for three. On Cabool’s next possession, Quincy Flanagan got a walk called on him and it was Ava’s ball again.

After that call, the Bears went on an all-out blitz with field goal after field goal from Dalton, Emerich, Mendel, and Swofford to close it all up 31-19 at halftime.

The Ava Bears were able to sink the ball for a total of eight three-pointers through four quarters. Players to look at next year will be Blake King and Swofford, who may have a bigger role with their shooting capabilities and athleticism. Blake made three of the long-shots, aided by two from Swofford and another two from the quick-setting senior, Caleb Johnson.

“Caleb, I thought (he) entered the season doing a really nice job defensively and if he gets a set shot three, he’s a pretty good shooter,” said Mallow postgame.

Out of the locker rooms into the second half, the Bulldogs showed that they looked hard at the Ava play rotation and looked for ways to get in and get buckets. On the other hand, the Bears let go a little and didn’t quite play the defense they needed to maintain the 12-point lead at the break.

The Bulldogs took to a blitz-like offense, taking the ball and crashing in through the lane. This led to several fouls for the Ava bench as there is little that can be done against that kind of offense. They will either shoot or draw the foul.

“I think we didn’t play very good defense,” said Mallow. “You know we gave them twenty-two points in that quarter and it really wasn’t that they were breaking down our pressure, we just didn’t guard very well. You got to give them some credit for that. They did a nice job running their offense and when they get against the kind of pressure we play, they just put their head down and take-off to the basket. That’s actually one of the hardest things to guard without fouling. They created some problems for us there. You can pinch your wings and stuff to help guard that, but then you don’t have the pressure anymore and they’re always able to pass it. So that’s kind of a catch 22.”

With twos from across the Cabool bench, plus some hard-earned free throws, the Bulldogs came out on top in the third, outscoring the Bears 22-16 and closing Ava’s lead to just six.

Half of the Bears’ three-point shots were made in the fourth quarter alone where the Bears took off on a 13-point run over the Bulldogs to extend the lead to 13 points at the final buzzer.

20 seconds in, Swofford hit a three to open the quarter and set a tone for the rest of the game. The next Bulldog possession wound up turned over to the Bears and led to Swofford making another two points, five in the first minute of the period.

Cabool’s Zack Beuer wound up fouling and turning the ball back over to Ava with 6:45 left in the game. Swofford again was last to set hands on the leather, sinking his third three of the game.

Less than a minute later, the ball ended up in Johnson’s hands. With a quick set of his feet he let the sphere go for his second three-pointer of the evening. Drake King was able to get the ball in the paint, using his height to chip-in two to cap off the Bears’ 13-point run.

“Well one of the things that I thought was important, was there in the fourth quarter (when) we switched to zone (defense),” said Mallow. “They got one shot and we got the rebound, (then) we came down (and) hit three or four threes in a row.”

The Bears started finding themselves in some foul trouble late in the fourth. They gave up the bonus to Cabool with 4:43 left in the game, but the Bulldogs only shot an overall 61-percent from the line and 30-percent in the fourth, making just three of ten in the final period.

But this also meant that Tom Emerich was staring-down four personal fouls as the whistle kept getting called on the Bears.

The Bulldogs got desperate in the final two minutes, shooting at any opportunity they could muster in an attempt to take back the tempo. The hard-pressure applied by the Bear defense did not relent until it was time to let the next crop of players to take the court.

Quinton Donley was able to draw a foul for one point on the night, but the younger Bears were pitted against the veterans from Cabool. Holding their own, Ava still outscored their opponent 19-12 in the fourth to ring-in a bittersweet victory at 66 to 53.

With every outgoing class, the Seniors had their final words regarding their four years on the court and the lessons they learned from the experience. This is what they had to say:

“It’s bittersweet,” said Johnson. “You make a lot of friends. It’s changed a lot since we started. We’re a lot better than we used to be.”

“It (stinks) that it’s going to end but it’s closer to baseball season,” said Emerich. “It’ll be different, that’s for sure. I had a good time last year playing with a lot of good memories and I don’t think I’ll forget those.”

“It’s been pretty exhilarating,” said William Mork. “(We’re) more than friends, we’re practically brothers on this team. We live for each other, ride for each other. This is what we do, spend every day after school for hours on-end, just doing what we love.”

“I mean I’m happy you won, but I’m sad that it’s over,” said Drake King. “I will look back and probably smile. It started out rough, had a couple rough coaches, but found a good one to go with it.”

Blake King made his presence known with 17 points with four field goals and three threes, Nate Swofford also came up with double digits thanks to three threes of his own and Dalton, who faced heavy defensive coverage, came out with 12 points and two assists. Caleb Johnson earned eight and an assist in the fourth with a hi-lo to Zach Mendel (4 points) in the fourth.

The Bears shot a collective 83-percent from the line.

The Bears hit the road for their final games, playing against Liberty-Mountain View on Friday and starting out in a 1-8 seed against Springfield Catholic in the MSHSAA Class 3, District 11 tournament starting on the 19th at 4 P.M. in Clever.