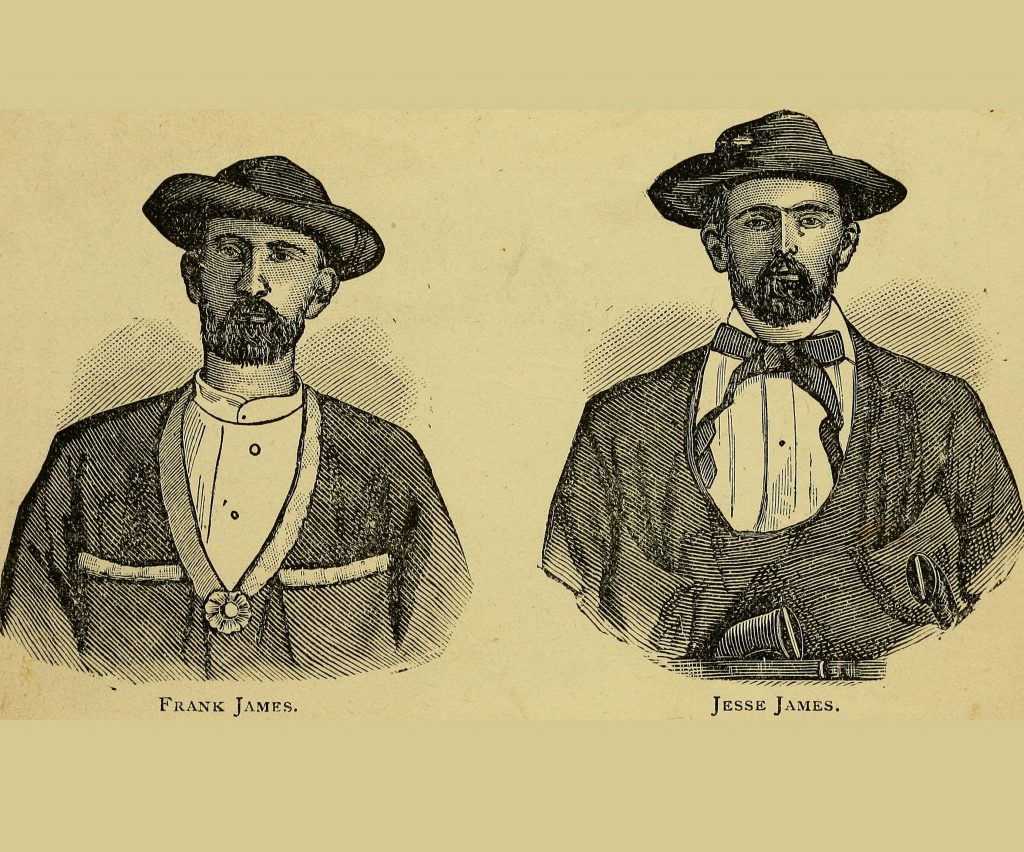 Did you read it?

Back on January 27th, NBCNews.com put Ava in the crosshairs of an article entitled Guns and God: Growing number of churches want armed security.

The roughly 2000-word piece focused on the Ava Assembly of God Church and its decision to create an armed security team.

The story proved popular, getting dozens of mentions on social media and pages of links from other websites.

It’s not the first time Ava and Douglas County have made the national news. From angels to outlaws to fruitcakes to soda fountains, there’s a story for every interest.

In possibly the tallest tale to ever throw shade on Douglas County, newspapers from Washington DC, to Brooklyn, New York to Philadelphia, Pennsylvania covered this story.

In March of 1890 three men claiming to be the last of the Jesse James gang were arrested by Sheriff Lyon of Douglas County. They had robbed an Arno store of $200 and the Wright County treasurer of $7000.00 (equivalent to about $200K in today’s dollars).

The men escaped from the Douglas County Prison. Nearly two months later they were apprehended 585 miles away in Watertown, Wisconsin. Sheriff Lyon made the trip up to recover them and pay the Watertown Sheriff a $75 reward.

An article in the May 29th Douglas County Herald said “These men are hard to hold, so a special term of circuit court should be immediately called so their case can be disposed of before they have another chance to escape.”

On June 7th, the three men escaped – again – from the Douglas County Prison. With 6 other men. And they made their get-away on the sheriff’s horse.

It reads like the plot of any good western movie. Holdups, prison breaks and horse thievery sound like the types of things the Jesse James Gang was known for.

The problem? The time-lines don’t add up.

Most of the James-Younger gang were captured or killed in 1876. Jesse James was shot and killed in 1882. Frank James surrendered later that same year.

None of the names of the three men in the Douglas County story are found in any list of the men who were known to ride with the James brothers.

Maybe it’s best to remember the words of another Missourian – Mark Twain – who said “Never let the truth get in the way of a good story.”

On May 23, 1896 Lafayette Sawyer, his wife, and their son were discovered dead inside their cabin east of Ava.

The story was picked up in the May 24, 1896 edition of the New York Times with the headline “FAMILY OF THREE MURDERED.; Robbery Probably the Motive of a Terrible Crime in Ava, Mo.”

Edward Perry was arrested and convicted of the crime. Perry was hung on the Ava square on January 30th, 1897 with a crowd of 3000 in attendance. It would be Douglas County’s first and last hanging for murder.

Ava’s time in the national spotlight isn’t all murder and prison breaks. The biggest story out of this area was about generosity.

It began on the February 22, 1940. That week’s edition of the Douglas County Herald ran a front-page article entitled “Anonymous Gifts Received in Ava”. The article described how four people, three of them former merchants and one the widow of a former merchant, received gifts from an anonymous sender totaling $450.

One week later the Herald headline was “Mysterious Gifts Still Mysterious”. The article mentioned that out-of-town newspapers had already sent reporters to Ava to cover the story.

Over the next weeks, the gifts kept coming. And so did the reporters. Even Time Magazine had a blurb about the Angel of Ava.

The gifts stopped, but the mystery of the Ava Angel continues. The identity of the person who signed their notes “Your Sunshine Friend” remains unknown.

In May 1957, a tornado hit the Squires area of Douglas County.

Kiree Brown was a schoolteacher in Frye (southwest of Squires). She heard the tornado coming, loaded up all of her 11 students into her 1946 Chevy two-door coupe, and raced off to a nearby storm cellar.

Her actions in saving the children gained national acclaim and an “American in the News” award from Jimmie Fidler, a radio personality in Hollywood.

On page 40 of the April 14, 1969 edition of the New York Times, Ava was featured in an article entitled “Ava, Mo., a Small Town in the Ozarks, Is Winning Poverty Battle.”

The May 7th, 1990 issue of Sports Illustrated contained an article entitled Glove Story. In it, author Steve Wulf traces the history of baseball gloves and the relationship players have with them.

From the 1980s through the early 2000’s, Rawlings manufactured baseball gloves in Ava.

The article said “A quiet town of 3,000 in south-central Missouri, Ava is somewhat off the beaten track. A hearty lunch for five at Sue’s Cafe costs about $16. Yet this is where Rawlings makes all of its batting helmets, most of its footballs and all of its professional baseball gloves. Perhaps because of its proximity to all of these sporting goods, Ava High has won three district championships in football, one in baseball and another in golf in the past five years.”

Author Bruce Selcraig described Ava in the article:”Deep in the Missouri Ozarks near the Arkansas border is a busy, blue-collar village of creeks and hardwoods called Ava, where I like to imagine the town’s 1,383 families sit around dinner tables discussing the Deep-Well Pocket and the Trap-EZE Web. Here in a one-story redbrick factory that smells the way Cooperstown should, the Rawlings Sporting Goods Company makes gloves for the best players on the planet.”

Bob Clevenhagen was mentioned again: “He can faithfully reproduce any of those gloves and, consequently, has gotten requests to make everything from George Bush’s old Yale mitt to authentic Black Soxera models for Field of Dreams and, recently, three Mickey Mantle models for actor Billy Crystal.”

The Monks at Assumption Abbey and their fruitcakes have made the national news a few times.

Describing the Abbey as “a 57-year-old Trappist Monastery hidden away in the tiny enclave of Ava, Mo., in the rugged woodlands of the Ozark Mountains.”, the Wall Street Journal ran articles about their fruitcakes in 2004 and 2007.

The Washington Post also covered the Monks and their fruitcakes in 2012.

On September 20, 2011 the New York Times ran an article entitled “Nickel Sales Just the Tonic for a Soda Fountain’s Revival.”

“A nickel buys a scoop of ice cream, a soda or a cup of coffee. And each afternoon the place fills with the frenetic chatter of students arriving for their daily overdose of sugar and the clang of an antique cash register.”

There you have it – a look at some of the times Ava and Douglas County have been in the national news. Some of these articles are available online, either free or behind a paywall. Visit our website at douglascountyherald.com for links to them.

Do you remember other times Ava and Douglas County made national news? Find us on Facebook and tell us about it.

Links for Angels and Outlaws: Ava in the National News 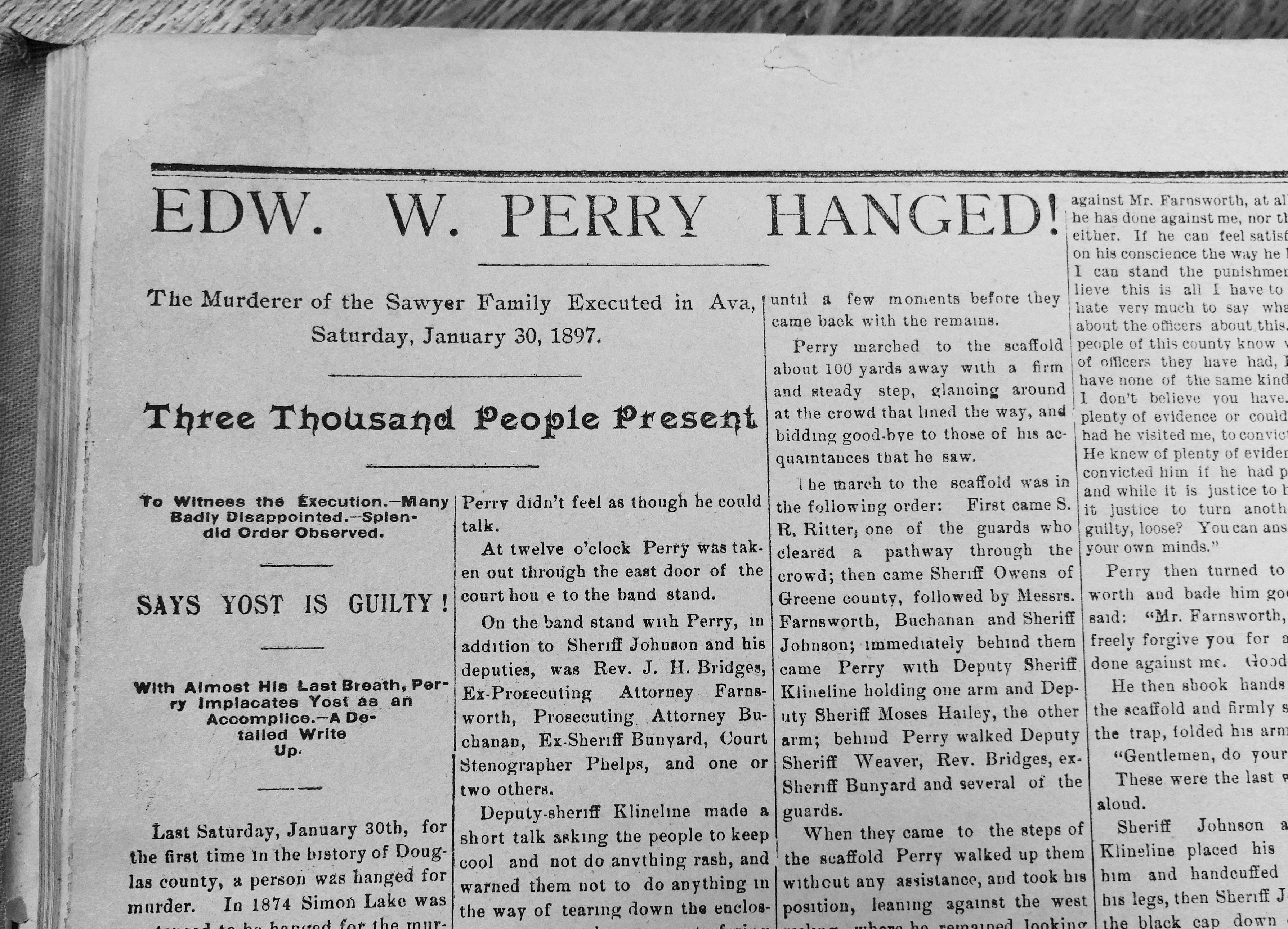 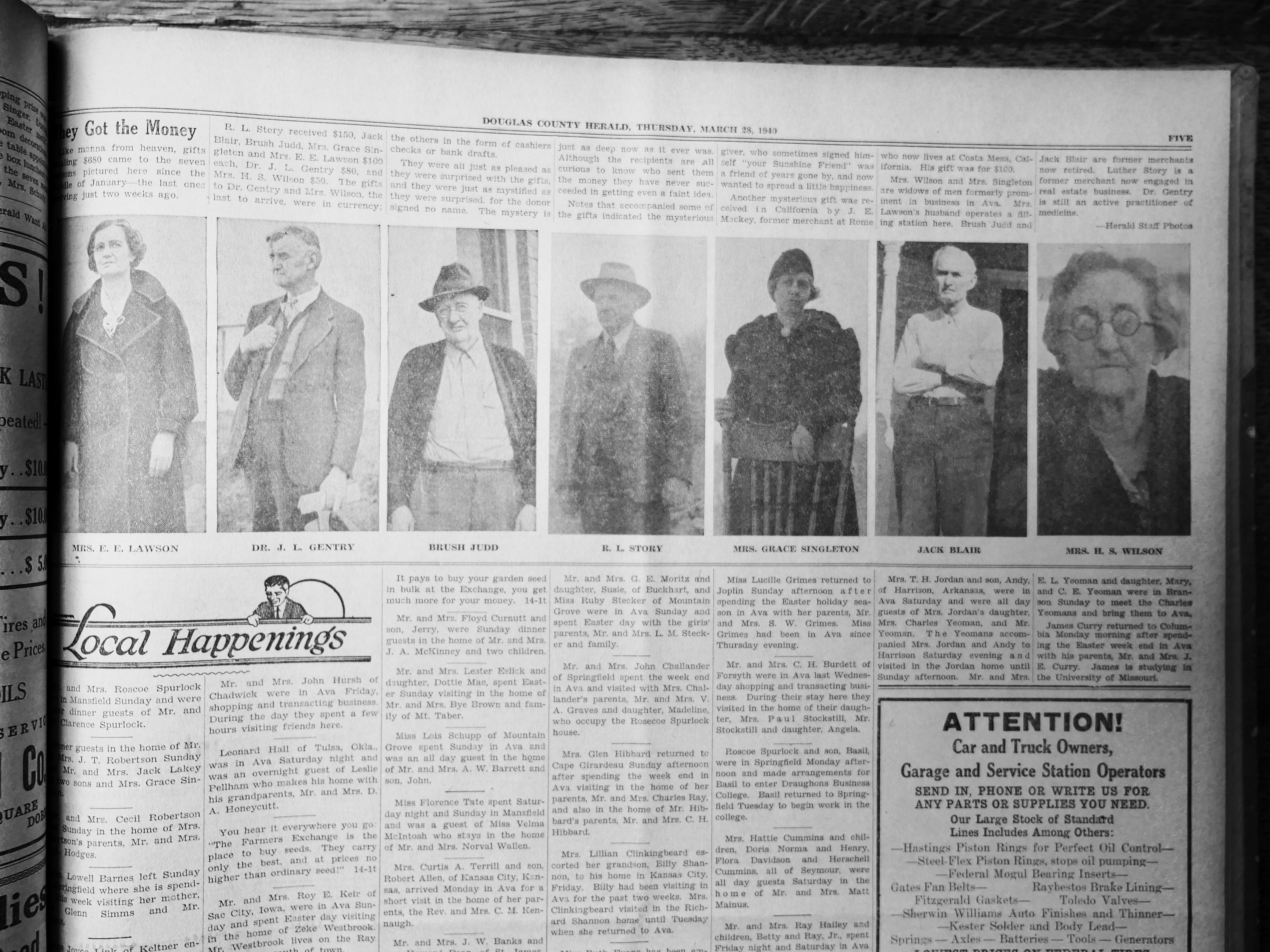 2008 – Fruitcake, Long A Holiday Horror, Gets a Makeover