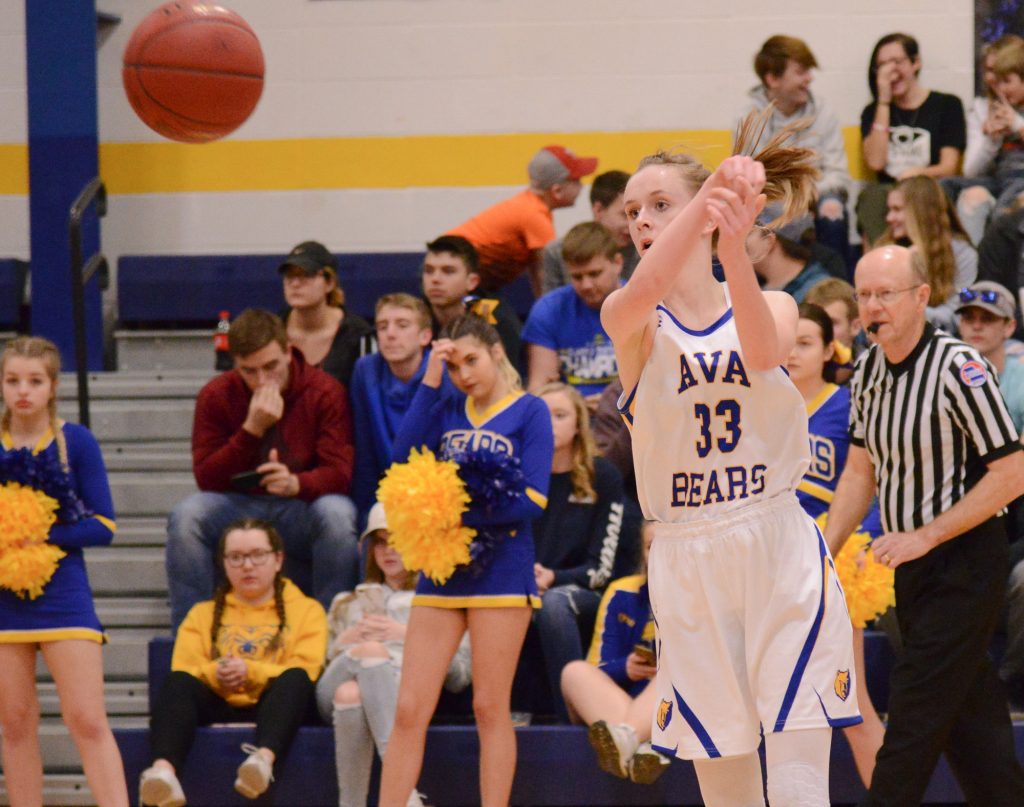 Ava High High School freshman Hanna Evans (33) makes a cross-court pass to a teammate during the second half of a non-conference, non-district game against Norwood on Monday, Feb. 4, in Ava. (Jason Hoekema/Douglas County Herald)

For some of you, the varsity game may have taken you by surprise when it started ahead of the JV competition on Monday when Ava hosted the Norwood Lady Pirates. For some walking-in with plenty of time to catch the varsity squad, found themselves one-half behind of the action.

This was the case when the Herald’s reporter walked-in with the game knotted-up at 20 as the teams warmed-up at the end of the mid-game break.

Despite the game flop, the Herald was able to collect some data from the official score book indicating a 7-4 first period for the Bears. Claire Fossett and Ashton Bewley came up with a combined six points plus one shot at the line from Lauren Mendel to make the 7th point.

Fouls came out to nip at the Lady Bears in the first period, leading to a sit-out for some of Ava’s starters.

“We had three starters that didn’t play in the second quarter and of course we had about a five- or six-point lead on them,” said coach Nathan Houk. “Then we had to sit (the girls) because we were in a little bit of foul trouble. It was Hannah, Eden, and Claire. All three sat part of the first and all of the second, so (Norwood) got it tied back up going into halftime.”

All three returned to play in the second half, with Claire Fossett coming close to sitting out again with four personal fouls called against her. Luckily, she didn’t get the fifth whistle and was able to earn another two and a trip to the free-throw line for a total of six points against Norwood.

Junior Emaly Keyes saw time on the maple strips in three quarters of play. In those three opportunities to perform for Ava, she did not disappoint. Keyes is not one of the starting five for the Lady Bears, but she came out and was able to hit four threes for Ava.

Her six points in the third period were crucial in creating a 17-14 difference and a lead for Ava going into the fourth.

As a junior, she may have a place on the offense next year.

“We’re losing four good seniors this year, but so she’s going to have a lot more of an opportunity next year two to come in and hit some big shots for us,” said Houk. “She’ll be able to compete for a starting position and have more minutes, more opportunity to hit shots like that for us.”

The Lady Bears came out with a fury, sinking seven threes against the Norwood defense. The Third quarter made the difference in the game with Keyes, Bewley, and Hanna Evans hitting the net from outside for a total of 15 points beyond the arc.

“They were playing a triangle and two,” said Houk. “They were guarding Ashton Bewley man-to-man, and then sometimes it was Eden man-to-man, (and) sometimes it was Hannah. So that meant the wings were going to be open. Emily Keyes is a really good three-point shooter, so we slid her in there and she got a lot of open looks and knocked them down for us.”

Bewley had the last say in the quarter with a shot from 20 feet followed by a swish and a roar from the Lady Bears fanbase. 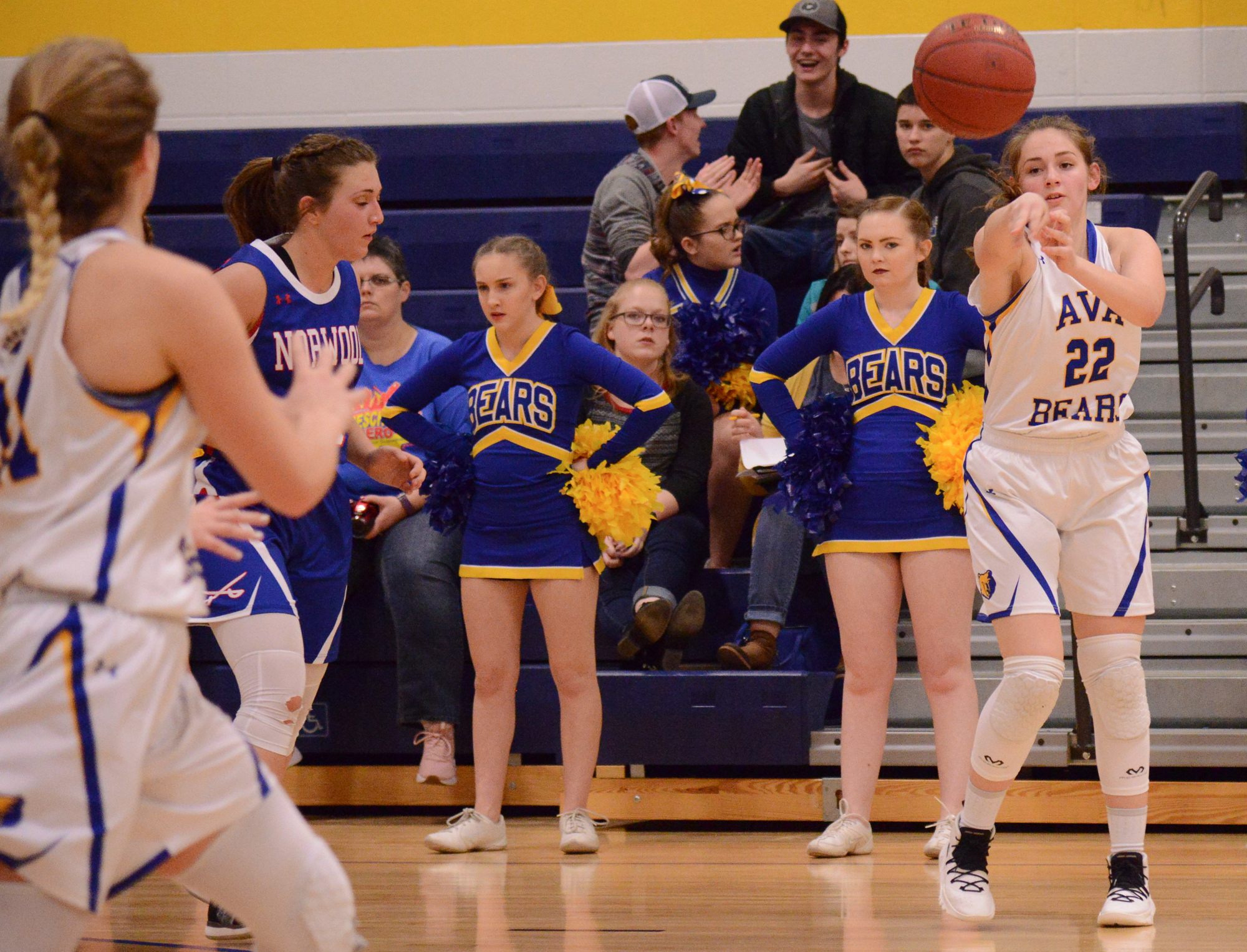 Even with the big performance from the Ava offense in the third quarter, Norwood had made up 14 of those points, the tie at 34 broken only by the buzzer-beater three from Bewley.

The fourth had both benches on edge.

Opening up for the Lady Pirates was Payton Drake who sunk one from outside to answer Bewley’s closing of the third quarter.

Emaly Keyes quickly answered back with a three of her own to keep Ava ahead, 40-37 with more than seven minutes left on the clock.

The game went cold without either team finding the bucket until the clock hit 4:19 when Norwood’s Josie Sullivan drove in, got the bucket, pulled a foul with one good shot to tie the game with 40 points either way.

Fossett later drew a foul and nailed the two free throws to make it a two-point game at 42-40 with 3:55 left. The whistle came back at her less than a minute later for her fourth personal foul and a trip to the line for Marla Chadwell, picking up one point.

With the bonus given to Ava at 2:09 in the fourth, Eden Little pulled the foul for the one-and-one trip to the line for two more points making it 44-40.

On the next Norwood possession Payton Drake came up with two points to close it back up to a two-point game.

With second to spare, Little was able to drive in for a layup, but missed it and gave Norwood the go-ahead possession if they could get it to the bucket before the buzzer.

Little came back with the steal and a foul call against Norwood, with Little making one more point for the Lady Bears to break it up, 45-43.

Norwood picked up the possession after Little’s trip to the line, moving the ball to their end of the court before calling a time out with just 16.3 left on the clock.

On the final inbound by the Lady Pirates, Claire Fossett was able to get her hands on the ball forcing the alternating possession rule to give the ball to Ava with just 5.3 seconds left.

Right after that, Hanna Evans pulled the foul from Keyera Cornelison for one last trip to the line and one more point for the Bears.

Leading 46-43 and the pressure lessened for the Ava bench thanks to that one free throw by Evans, Little came up with the steal with just four seconds left.

Game. Set. Match. The Bears pulled-through to top Norwood and improve to 13-8 overall.

“When Hannah made that that last free throw, Claire hit two big free throws earlier in the fourth, then Eden hit some big free throws in the fourth, and then we were trying to get the ball to Hannah,” said Houk. “She’s one of our better free throw shooters and she was able to knock one down there. With that, if they did throw-in a prayer you’re still going overtime. Luckily Claire got a steal there at the end and they didn’t get a shot.”

Emaly Keyes led the Lady Bears in overall points, scoring 12 from four threes shot in the second through four quarters. Bewley came up with 11, Hanna Evans had seven, Fossett six, five and three from Lauren Mendel and Eden Little, respectively and two free throws from Emily Stilling in the second quarter.

The Lady Bears shot an overall 85-percent from the free throw line, puling 11 points from the Norwood defense. The Lady Pirates did match them point-for-point at the line, mirroring the Lady Bears.

The Lady Bears made seven field goals, falling shy of Norwood’s ten. It was the seven threes from the Lady Bears – four from Keyes – which helped take Ava to the top against Norwood.

The girls will face Bradleyville at home today, Feb. 7 and will have their senior night Monday, Feb. 11 while hosting Cabool here in Ava. The Bradleyville Eagles are 17-4 and are on a nine-game win streak since their win over Forsyth on Jan. 10. Cabool is currently 7-13 overall and are suffering through a four-game losing streak.