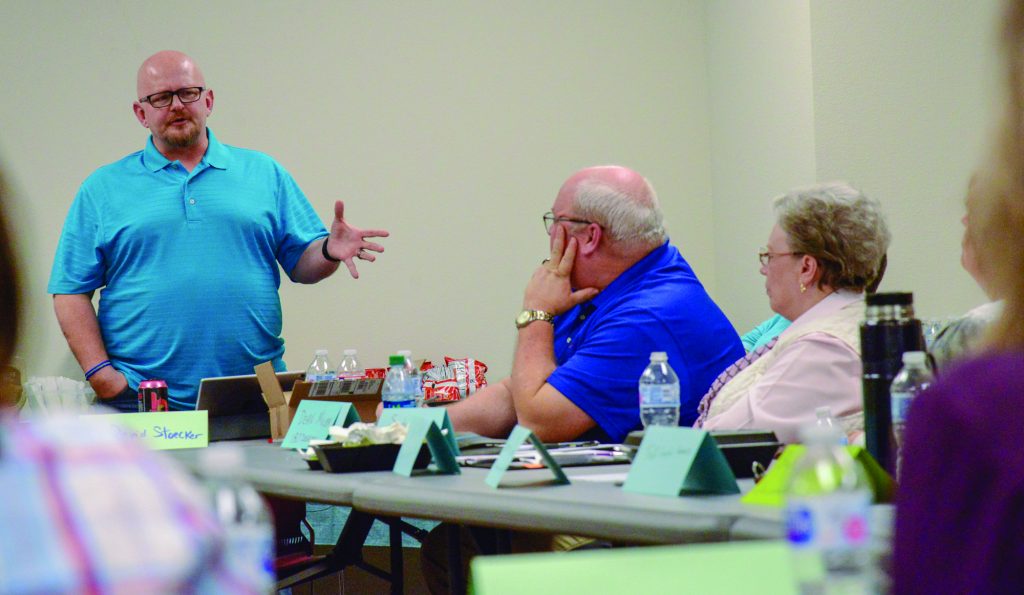 David Stoecker speaks to a roundtable meeting of area comunity organizations working together to combat illicit substance use in the Ozarks on Monday, Jan. 4, in Ava.

Roundtable talks continued Monday evening with several area organizations coming together to work against the opioid epidemic that has gripped the country over the last decade.

As national politics moves to curb the spread of illicit substances, the Centers for Disease Control and Prevention reported a 19.2-percent drop in the national prescription-rate since 2006.

This does not mean that the problem has been solved.

On January 31, U.S. Customs and Border Protection officials made a record seizure of illicit fentanyl at the Nogales Port of Entry near Tucson, Arizona.

CBP found more than 400 packages in a false bottom built into a trailer hauling cucumbers into the United States. In the shipment was 254 pounds of fentanyl, the drug behind the skyrocketing number of overdoses and drug-use related deaths.

395 pounds of methamphetamine were also seized in the inspection.

The 26-year-old driver has since claimed he did not know of the trailer contents besides the cucumbers meant for a produce company in Southern Arizona. He was charged with two counts of 21 USC 841, possession with intent to distribute and remains in federal custody.

“It doesn’t take but a day or two to get here (from Nogales),” said Douglas County Sheriff Chris Degase.

Just one week prior, CBP intercepted a shipment of 44 pounds of fentanyl in San Clemente, California.

New to the discussion was pharmacist Todd Campbell and county prosecutor Christopher Wade.

Campbell says to have a long history of filling prescriptions of pain medication in his career. He says that he saw it come across the counter more and more often, and sometimes it was for younger people.

“A lot of the large chain stores do business frequently with opioid medications. I know there is a prescription problem, but I know there are also people in pain,” said Campbell during his introduction.

Campbell’s presence represents one of the routes that opioids are shuffled through for illicit use.

A simple search on the Internet indicates an uptick in prosecutions against doctors who over prescribe, or even filling prescritions for sale or use.

CNN reported that a Pennsylvania doctor was indicted in December 2017 on 19 counts including charges related to five patient deaths while over-prescribing opioid edications.

Prosecutor Christopher Wade referred to an article he wrote titled, “Grandma the drug dealer.” According to Wade, the article shed some light on a problem that has become a national crisis.

Also joining the discussion was county coroner Rick Miller, who delivered insight to the issue from a first responder’s point of view.

“We used to carry two boxes of Narcan in the (ambulance), now we carry about 20. I’ve seen cases where 6-8mg of Narcan isn’t helping,” said Miller during his introduction.

Drug dealers are using illicit substances like fentanyl to cut into other drugs, increasing both amounts and power. End users sometimes are unaware of the added substances and overdose easily. Just 2 milligrams of fentanyl can be lethal to a human.

For comparison, the average pill-size of over the counter pain relievers like ibuprofen is 200 milligrams.

But now there is a new substance hitting the markets. And it is far-more powerful than fentanyl.

“Carfentanil is surfacing in more and more communities.” said DEA Acting Administrator Chuck Rosenberg in a 2016 press release. “We see it on the streets, often disguised as heroin.  It is crazy dangerous.  Synthetics such as fentanyl and carfentanil can kill you.”

According to the Drug Enforcement Agency, carfentanil is used as a tranquilizing agent for large mammals, like elephants, and its fatal dosage rate for humans is unknown.

Present were also two former substance users, one who was present to deliver a special presentation regarding his own life.

David Stoecker made several points regarding treatment and the detox experience. Even after leaving illicit substances behind, he found himself drinking alcohol to fill the void.

Stoecker says there are multiple pathways to getting clean, but that his “was through Christ.”

Some church parishioners in Ava may have been asked to fill out a brief survey measuring the perception of illicit substances and their effect on the community.

Ava Assembly of God pastor Buddy Boyd passed the survey out during a service on January 27.

Those results are being input to a database and will provide data on the climate of illicit substances in the Ozarks.