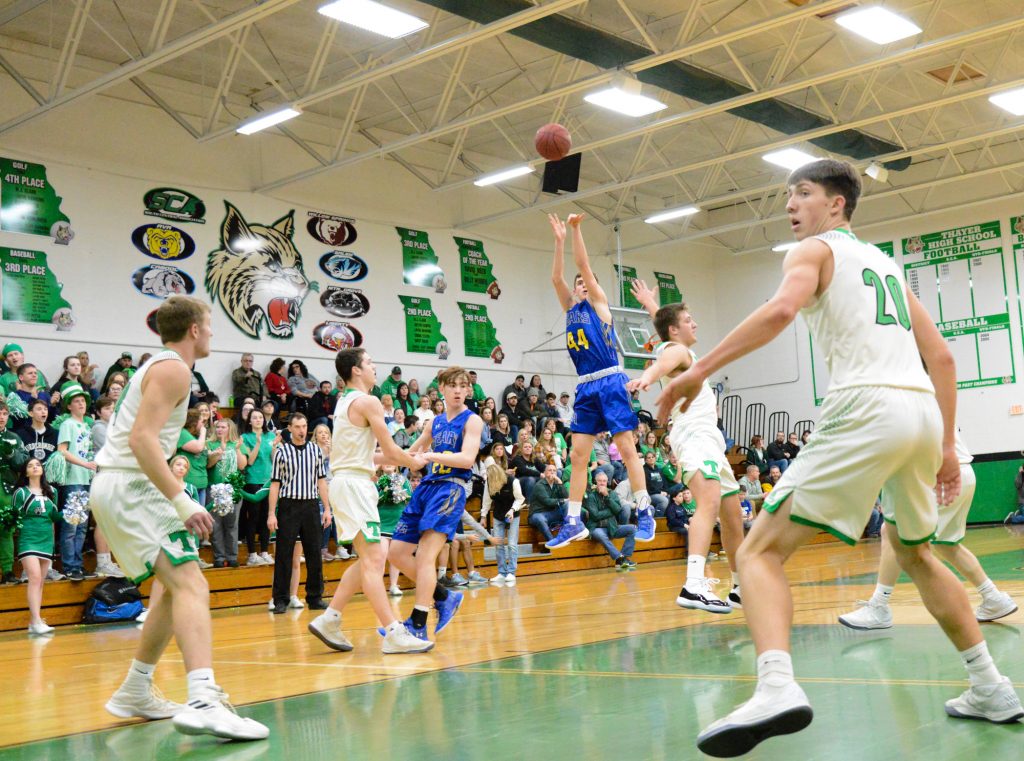 Andrew Dalton takes a jump shot from about 15 feet out during an SCA conference, non-district game on the road aganst Thayer High School on Friday, Feb. 1. (Jason Hoekema/Douglas County Herald)

THAYER – The Ava Bears went on the long road down to Thayer to play an SCA, non-district game against the Thayer Bobcats. The Thayer campus was having its “Courtwarming” celebration, similar to Ava’s “Hoopcoming” scheduled for Friday.

The first half was nothing short of entertaining as the Bears opened up with a promising six-point sprint thanks to threes made by Andrew Dalton and Blayne Mendel.

The tempo was definitely swinging in Ava’s favor before the Bobcats’ Jordan Andrews and Braden Hufstedler answered with a three and a two with the and-one to make the first knot of the game at six points apiece.

After trading buckets until the first buzzer, Thayer’s Hufstedler had the final say of the period with two points to break the 13-point knot, ending the first 15-13 for Thayer.

“We were just trying to be aggressive against the zone,” said coach Mike Mallow. “We did run some stuff and screen for (Dalton) and try to get him the ball some. Their zone gets so spread out and they challenge every pass, so we felt like we needed to attack.”

The second started with a Thayer foul wrenching-up an attack and causing a turnover to Ava. Despite gaining a vital possession the pass from Kaden Bruce to Caleb Johnson for three ended up ricocheting back into play with a bounce off the rim.

The Bears also broke up advances by the Thayer offense with Nate Swofford nixing an attack at 5:42 and the Ava defense stopping another advance 20 seconds later to give the Bears opportunity for four points before Kaden Bruce picked up his first foul, giving a trip to the line and the bonus to Thayer’s Jayce Haven.

Haven shot four of four in the first half, his second trip to the line occurring 14 seconds later with a foul given-up by Swofford with 5:04 left before the break.

The tables seemed to have turned on Ava with Blayne Mendel delivering another foul to Thayer with 4:30 left in the half. With both offenses stagnating, some work needed to be done to break this game up.

Cue the QB-like bullet-pass from Caleb Johnson in the right wing to Dalton who put it in for two points and the start of a five-point jump thanks to a three from Blake King to take the lead 22-21.

20 seconds later, the Thayer offense figured it all out and answered with a three from Gaige Pitts, his only score of the evening.

Give the Bears another 20 seconds to make the opportunity open up and Kaden Bruce got set and delivered the game’s sixth bucket from outside the arc to take back the lead, 25-24.

Dalton exchanged twos with Thayer’s Jordan Andrews before drawing the foul for a one-and-one trip to the line to extend the lead 29-26. The Bears hadn’t seen the last of Andrews as Thayer made sure to have the last say before the break with a two from Andrews to close things up 29-28, Bears.

The third period ended in a stalemate of 17 points per team. Not but 15 seconds into the second half, Dalton tapped-in two but was answered by Thayer’s Ayden Stone. Stone had gone unnoticed without scoring any points in the first half, even as a starter.

Stone chipped-in four in the third, once in answer to Dalton and a second after a steal by Hufstedler was passed to Stone for two.

At 5:13 left in the third, Thayer had gone-off with six unanswered points. Then back-to-back threes from Swofford then Dalton and Swofford again would close up the gap made by the Bobcats who lead 43-42.

With 2:53 left in the period, Dalton would take one more shot for three but give up a personal foul to Spencer who would take-up one point from the stripe to make the game 44-42 for the Bobcats.

Ava churned up two more points from Blake King late in the third to once-again knot the game, this time at 44 points.

One-minute left in the third period and Nate Swofford delivered for two more points to make it 46-45 for the Bears.

Then Tom Emerich gave up his third foul. After the call, with Emerich sitting out for a bit, the Ava offense seemed to come up short of a drive on the bucket. A timeout by Coach Mallow with 48 seconds left and a game plan to follow got Dalton within striking distance for two more points.

Instead, Dalton was surrounded with no whistle help as the ball was stripped from him by the Thayer defense for a Hail Mary shot to try and take the lead before the fourth. It missed, and the Bears maintained their thin, one-point lead.

The Bears are not afraid of giving up fouls, but that did not help the Ava bench in the fourth period where referees would blow the fifth whistle on Emerich and Blake King.

King was able to deliver a three and one free throw before getting benched.

It wasn’t the one-and-ones that would spell trouble for Ava, rather the two freebie fouls given to the Thayer offense gave the Bobcats a seven-point boost before the end of regulation. In fact, the Bears did not give up the bonus until 3:28 remaining in the fourth.

“The fouls – I think – were 12 to 3 in the second half and we didn’t press,” said Mallow. “We played half-court defense. I thought we played pretty well, but they did a nice job and you just got to give them credit. That’s what it comes down to.”

Ava took possession of the ball to start the fourth but turned it over to the Bobcats but 15 seconds into the final period.

Swofford then gave up two shots to Jordan Andrews – who shot 100-percent for the night – who made the two shots to make it 47-46 for the Bobcats.

Another turnover on an over-thrown pass to Dalton that went out of bounds gave the ball back to Thayer who had just taken the lead.

Dalton made up for the mis-step with a steal and a foul given up to Blake King who would sink one of two to again tie the game, at 47.

Blake King then found himself open with 6:15 left in the game for three more points to take the lead again, 50-47 for the Bears.

Shy of one minute later, Thayer’s Jayce Haven made yet another knot in the rope with a three pointer to make it 50 apiece with about 5:26 left.

Andrew Dalton made his last mark on Friday’s game with a three near the five-minute mark to pull Ava ahead 53-51 after Thayer’s Spencer pulled one point from the line.

In the final five minutes after Dalton’s three in the fourth period, the Ava offense suddenly went silent. While the Bears scrambled to get Dalton into the post, the Thayer defense finally put on their armor and guarded the bucket vigorously.

With 3:50 left, Thayer started to push themselves over the Ava defense with two from Andrews to tie it up… again… this time at 53 points.

A foul drawn from Blake King sent Ayden Stone to the line for one point to break the tie for the Bobcats.

Followed by an over-thrown pass 15 seconds later, the ball went out of bounds and into the possession of the Thayer offense.

With the one-and-one bonus in effect, Johnson fouled Andrews who took to the line for two and extended the lead for Thayer. Johnson had a travel called on him just 5 seconds after, giving up possession once again.

The Bears were not making the rebounds needed to get the ball down the court. Meanwhile, Thayer was taking second, or third, shots at the bucket with under three minutes left.

Those costly offensive rebounds lead to a six-point surge on top of seven earned points by the Bobcat offense.

“You’ve got to give them some credit,” said Mallow. “I feel like – and I’ve felt this way the last 10 years – they are the best offensive rebounding team in the league every year and we tried to prepare for that, but I felt like they just out-(muscled) us on the boards. I felt like some of those were fouls, but if they don’t call it you’ve got to shove back just as hard and they just basically bullied us in the paint. That last part of the game they got a bunch of offensive rebounds.”

Zach Mendel tried to keep an Ava possession alive in the last minute of the game by pushing the ball back inbounds, but a teammate wasn’t there to pick up the ball.

Instead Ayden Stone picked up the ball and leaped up for two more. Jordan Andrews was able to pull another foul on the vertical, sinking the last two points to beat Ava, 65-53.

Andrew Dalton led the night with26 points, aided with double digit scores from Blake King for 11 and Swofford with ten. Blayne Mendel and Kaden Bruce each hit the net with a three-pointer but scoring from across the Thayer bench overcame the Bears attempts to keep the game.

Thayer was led by Jordan Andrews with 17 points, Jayce Haven with 12, Braden Hufstedler with 13, and Ayden Stone and Dylan Spencer with eight each.

The Bears totaled 20 fouls which cost them 19 points Friday night. They would not get a chance to make those free throws up with Thayer committing eight fouls in the first half and a mere two infractions in the second. The Bears shot a collective 66-percent from the charity stripe while Thayer shot for 73-percent.

The Bears sunk nine threes against Thayer, but the Bobcats with 19 charity points and 17 field goals came out on top.