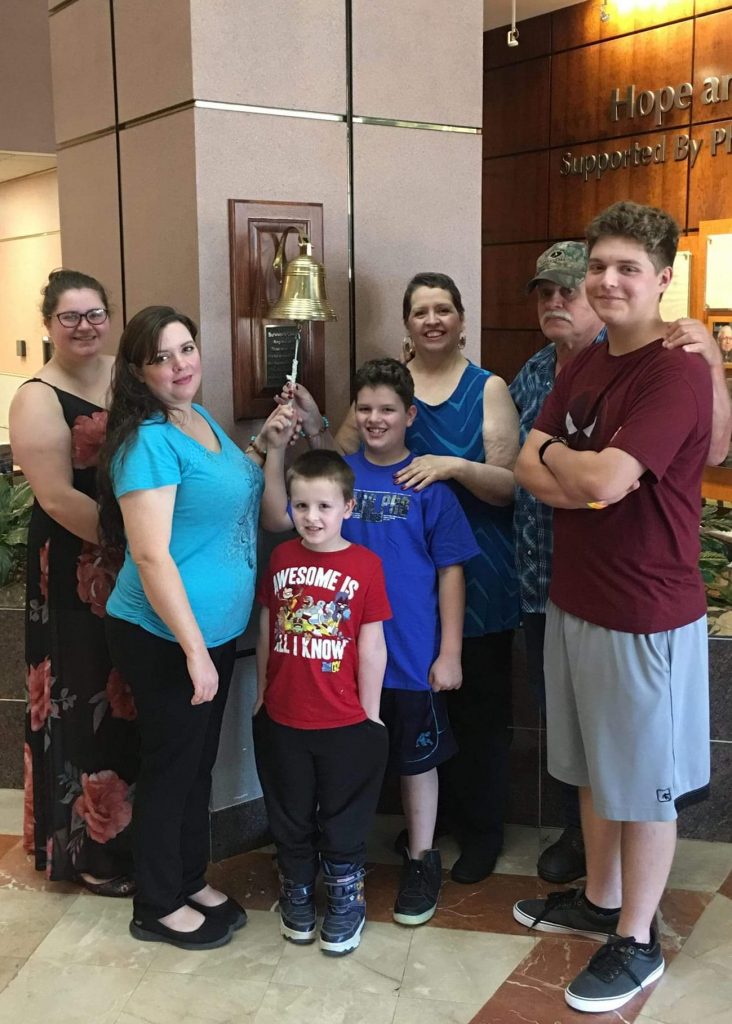 Doris and her family are shown celebrating the ringing of the bell which generally signifies the end of cancer treatments. Family members are, from left to right, Celia Davidson, Alisha Davidson Reynolds, Luke Reynolds Buack Reynolds, Doris, Joe Davidson, and Jesse Davidson Jr.

The question is where does a cancer story begin? If I knew this then perhaps there wouldn’t be any cancer for me or anyone else because cancer might not exist. How I wish this were true.

I write very personally, so take warning now, this may be too much information. But I share it with the hopes that it will help someone else to be aware of some of the symptoms of cancer that most don’t recognize including myself at the time.

In the spring of 2017 I was not feeling well at all. One leg was very painful and swollen and I was having difficulty walking on it. My appetite had greatly diminished and nothing seemed to settle well except for grilled cheese sandwiches and even that was rare. My stomach seemed to be feeling full with only a few bites. (Little did I know that these were all signs of cancer.)

Oddly at night while rubbing my side, I noticed that my stomach was hard to the touch. Never had this been true. It had always been soft and even squishy. I began to worry. What is wrong with me? I knew these things were not the norm for me.

I made an appointment with my Dr. in Springfield and told her of my symptoms and showed her the hard place in my stomach. She thought I had a hernia of the belly button. Well yes…… She was missing it though and I knew it. I rolled over onto my side and said feel of this. She did and looked so surprised then began to thank me (four times even) for showing this to her. It was hard and the edges were distinct. It went from the lower abdomen to above my belly button and I recognized that it was growing daily. Yes, it was a tumor that I had discovered myself. (Don’t always expect your doctor to find everything, they don’t know your body like you do. Had I not been persistent, she would have missed it.)

A CAT scan was performed and sure enough there it was. I was referred to Dr. Al Bonebreak who holds several titles but among them is gynecological cancer doctor. I should have known immediately that it was cancer but had hopes that it wasn’t.

I have to tell you honestly I was more scared of the surgery than of the word Cancer. Truly. I had a surgery before and woke up choking.

Plus this was going to be lengthy and difficult though Dr Bonebreak told me it would go fine. I can’t say I believed him. LOL

I grew up with a faithful Christian Father and Mother. So Faith in God was a given. I didn’t know how much more I was going to rely on Him than I already did, but I was about to find out.

Our son Jesse Davidson is the Pastor at Faith Rock Church here in Ava. I was telling him of my fears and perhaps this will help others facing difficult times. It certainly helped me.

He said, “ Mom, you are a Christian, right? So you believe what the Bible says about Eternal life. Yes, so if you wake up from surgery, YOU WIN. If you die, you go to heaven which is the goal of every Christian at the end of their life and again, YOU WIN.  So this is a WIN-WIN situation.”

What a way to look at it. I was in a win-win situation! I took that thought into surgery with me and I have to say I totally felt at peace the day of surgery. God and Jesse completely supplied the peace that passes all understanding.

I had a lengthy surgery with a complete hysterectomy, appendectomy, removal of a large tumor, some lymph nodes, and other procedures. I spent two weeks in the hospital and had developed blood clots in a lung and one leg. Well, I won. I woke up to smiling faces of my family.

After a few months of recovering from surgery the doctor decided it was time for chemotherapy. He said it would be aggressive because the cancer was very aggressive. Chemo is no walk in the park. It drains you of energy and with my case, it caused neuropathy in my hands and feet which is still an issue though it is better. Following chemo another scan was scheduled and by summer of 2018 there were only three lymph nodes of concern left. I was sent to Dr. Albritton in Hulston Cancer Center for Radiation therapy. We went 5 days a week for five weeks. We stayed home and drove it daily. But thank the Dear Lord, it wasn’t as difficult as chemo.

I was so blessed in that my husband Joe and family were always there by my side. They never allowed me to go through any of the treatments alone. They kept me laughing and looking toward the future with hope. We saw some there who were taking chemo treatments all alone and they looked so very sad. My husband, daughter Alisha, and I always tried to speak to them to lighten their day and prayed for them to be well too. I cannot stress enough how much I appreciate all of my family and friends for everything they did.

It was a very difficult journey in so many ways, but there were lessons learned along the way that I wouldn’t take anything for…. I learned about myself and who I really am. I learned more about trusting in a faithful God who is ALWAYS by my side and has helped me through every moment. I learned how to trust the depth of what I believe, how to truly know with assurance that God’s plan for me is good. I trust that He has brought me through this for a purpose of sharing that he does still create miracles.

I am often asked what symptoms I had. I will share these with you though there are more and mine may have been individually different.

1. Lack of appetite and feeling full with only a couple of bites.

3. In post menopausal women, vaginal bleeding even if it is only a drop or two. (This is a huge indicator that cannot be ignored. Run to your doctor, you may have a pre-cancerous condition that is easier to treat.)

There is far too much to tell, but I want to suggest to everyone that if they feel something is wrong in their body to please go have it checked out and be persistent. My doctor almost missed it. Know your body and trust your instincts. An annual checkup is a very good idea. Also ladies, just because you aren’t in your child bearing years doesn’t mean that you are free of gynecological problems. Sadly, many women go through these things at an older age.

There are some resources that I want to mention to anyone going through GYN cancer. First is GYNCA and their programs. They offer support and various types of help to people in our area. The short blonde wig that everyone loves came free through GYNCA. They also provided gas cards to help with transportation to and from Chemo and Radiation treatments.

Second is the American Cancer Society in Springfield. They offer various types of help including lodging during treatment and also free wigs to cancer victims.

This took place only a year and a half ago, so I cannot say “Oh look how long I have lived past the cancer diagnosis,” but I can say I am having fun. I am living, loving, and laughing with my husband, children, grandchildren, family, and friends, as well as my church families.

Isn’t this what we all desire? I certainly do. 🙂 I continually thank God daily for all he has and is doing for me. To me, without him this would not have been bearable. But with Him, all things are possible. Even beating cancer.

Wishing you a cancer free life and much happiness.  Thank you for your continued prayers. Doris