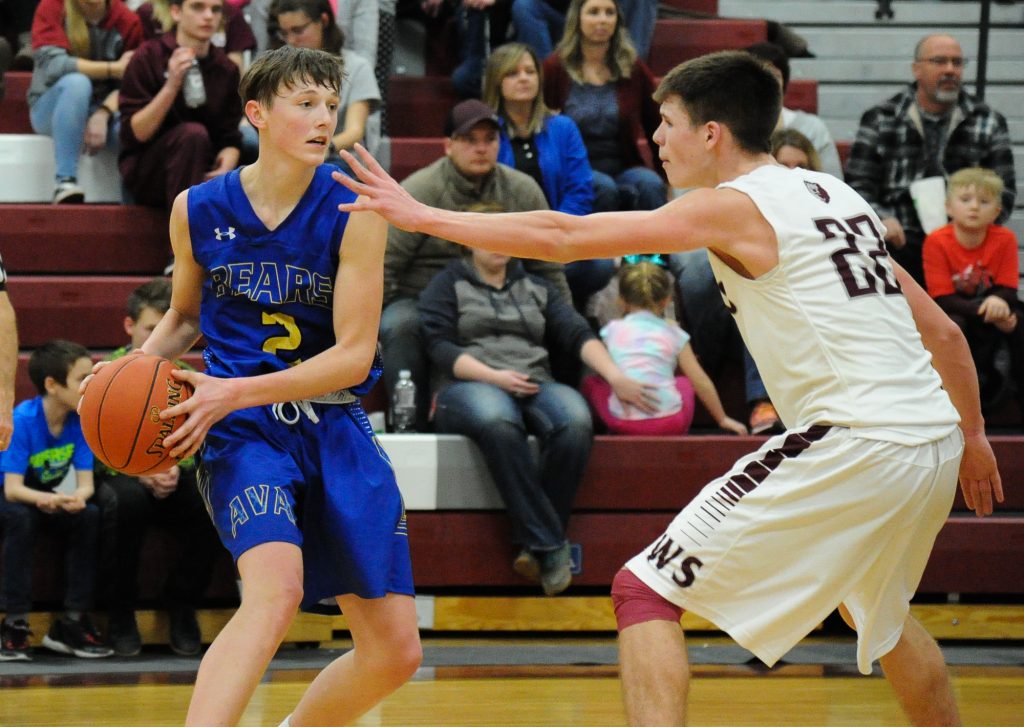 WILLOW SPRINGS – On the eve of the coldest air mass to hit Missouri this winter, the Bears – both Ava and Willow Springs – were warming up at Munford Gymnasium.

In a brief pre-varsity game back-and-forth, Coaches Mike Wilson and Mike Mallow chuckled at Wilson’s peeking at the starters for Ava.

“If you want, I can take a picture and send it to you,” said a playful Mallow. “It’s been like that for a month!”

NOT THEIR FIRST RODEO

It was the second meeting between the Varsity Bear dens, the first having taken place at the 73rd Annual Blue and Gold Tournament in Springfield on Dec. 27.

Ava dropped that game in a narrow 60-55 for Willow Springs and were put out of the tournament early with two losses, the first to District 11 leader Springfield Catholic.

The Ava Bears were initially stunned by the 71-34 loss to Catholic, and it showed in the first half in December. The Ava bench trailed Willow Springs 20-15 in the first period, 16-9 in the second.

It would be after the break that a talk, or some conversation changed the Ava Bears’ outlook as they topped Willow Springs in the third period, 14-9, and again in the fourth, 17-15.

Fouls ultimately put the writing on the wall, Willow Springs cashing in on 25 of 34 shots at the free throw line to defeat Ava by five.

Notorious for putting up double digit numbers in most games, freshman Andrew Dalton was well-matched and only put up seven points in Tuesday’s Game.

Paired against Willow Springs’ Carson Lowe, a six-foot-tall junior, the Bears had to find new avenues of point-making in order to have a chance at winning the game.

“They put a quicker kid on him and then they put Scotty (Osborn) on Nate Swofford,” said coach Mike Mallow. “So that gave them some matchup problems and they decided (to) stop Dalton, somebody else (will) have to beat us. Nate was able to drive, kick the ball to open shooters, and get to the bucket some himself.”

Dalton gave up four fouls in the second half, edging on the big five that would bench him. Luckily the whistle didn’t find him as players rotated from the bench.

The Ava Bears ripped open Tuesday’s game with an 18-7 first period over Willow Springs in a stark contrast to the teams’ previous match where Willow Springs out-paced Ava 20-15.

Andrew Dalton came up with a big steal and a pass to Nate Swofford for two points, capping-off a 9-point sprint by the Ava offense. The period was ended with a nine-foot buzzer-beater by Ava senior Drake King.

THERE AND BACK, AGAIN

That big lead would be torn down, though. Willow Springs put some grease on the squeaky wheels and got rolling to flip the tables on Ava with a big 21-8 performance to take the lead into the half, 28-26.

Swofford found himself in some foul trouble, picking up two marks in the first half. Mallow was faced with starting the rotation of players to keep legs fresh on the court.

“In the second quarter Nate was in foul trouble,” said Mallow. “Their strategy worked a lot better at that point. Come back to the third quarter (the game) swung back our way we had all our guys in. So that’s the chess match there that was going on.”

Down by two points at the half, Mallow was pleased with how things were playing out.

“At halftime it was just, hey let’s catch our breath, we’re fine, we’re OK,” said Mallow. “It’s a two-point game, I said hey if you had told me that we were going to be down two on the road at halftime I would have taken it because I think we can win from this position.”

Both teams were able to come out with 15 points out of the break, keeping Ava behind the curve by two. Foul trouble for Willow Springs came out as they gave up 17 fouls in the second half.

This led to four trips to the stripe by Ava, who raked-in five free points on top of twos from Blake King, Tom Emerich, Drake King, and Dalton.

The fourth quarter brought more charity to the Ava bench with seven more trips for eight points thanks to the Willow Springs defense.

Coupled with a big three from Emerich early in the fourth period, Ava was able to tie it up at 56 at the end of regulation.

“We changed our little defense a little bit this time, compared to the last time we played them,” said Mallow. We try to do a defensive evaluation after each game and some of our pressing stuff was not effective the first time we played them. We changed that and we did that differently. I think it kept (us) off the foul line.

Last time the schools met, Willow Springs took 25 points from Ava fouls to get the upper hand at the Blue and Gold Tournament in Springfield. This time around, the Ava bench was able to draw fouls for 27 points. 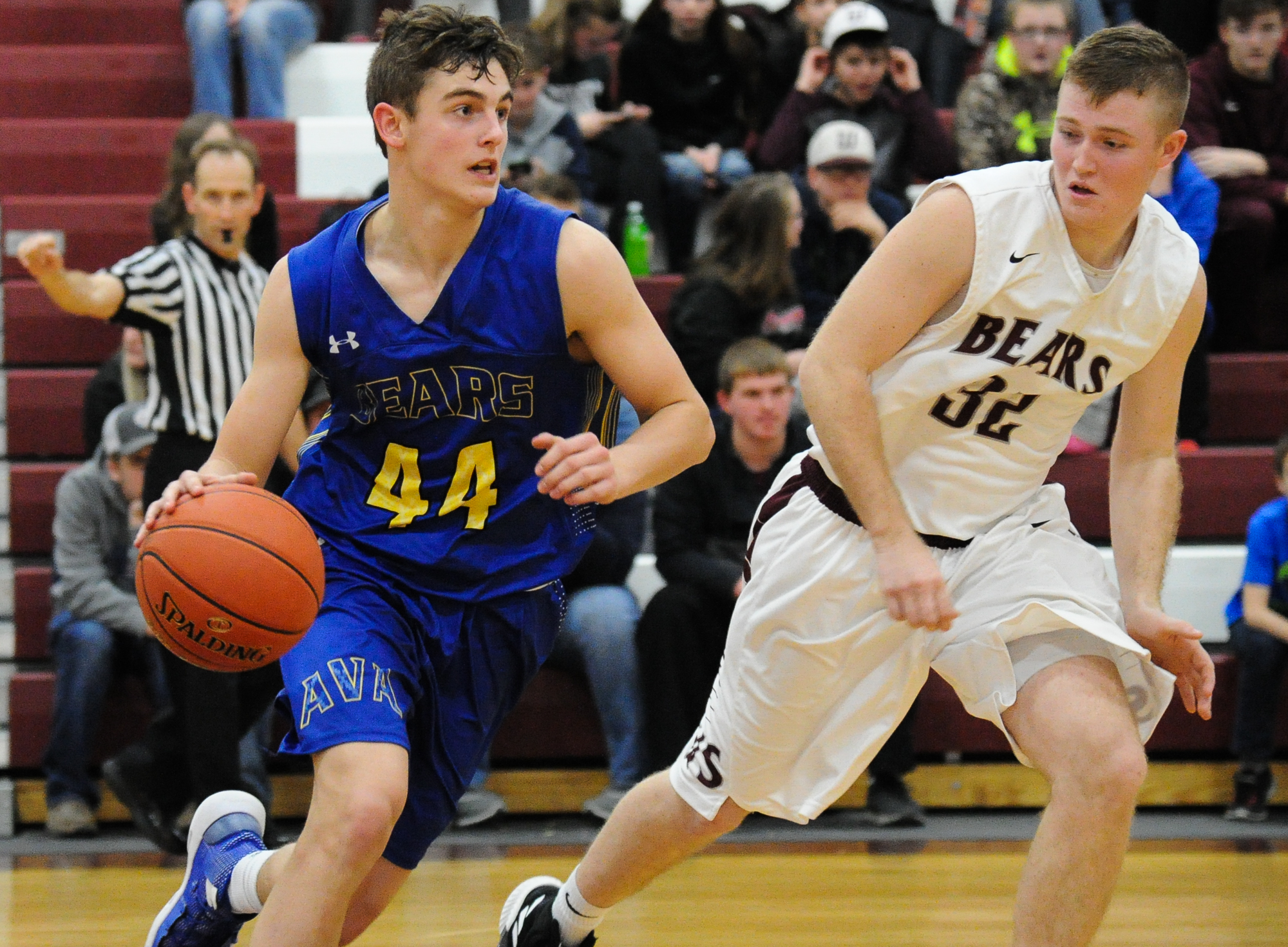 PUTTING IN THE OT

Ava was ahead 56-54, but a late push to the bucket by Springs’ Tryton Henley made up the two with not a second to spare of Ava on the offensive possession.  Buzzer, and OT.

Fresh timeouts and another four minutes to determine the game, the fouls called on Willow Springs spelled-out defeat under frustration.

“Caleb Johnson said hey we were in overtime at Hollister we’re fine,” said Mallow. “We’ve done this before, we’re good. Senior leadership from Caleb there.”

In the overtime period, the Ava bench would draw five fouls and shot 100-percent for nine points. Willow Springs made a quick three, but trips to the line by Talbert and Osborn would come up empty.

“Down the stretch all (our) guys didn’t foul,” said Mallow. “That might have changed the game, if they’d hacked somebody, but they (Ava) kept their hands clean.”

Grabbing the final possession as the clock blanked Ava had learned their lessons and grown from the last match against Willow Springs, winning 70-61 after one OT period.

“It was exciting,” said Mallow. “I liked how they competed and I coached here for 14 years, so it really meant a lot to me the effort they played with and to have the win and it’s just really special.”

Two minutes in and Ava was sitting just one point behind, 6-5, and Willow Springs had the ball. Another pass and uncontested layup by Cole put the Bears back in the game down by one, 8-7 with 3:40 left.

Turnovers weren’t the problem for the Ava JV squad but failing to capitalize on those key moments when the game’s energy can completely shift is essential.

A steal from Zach Mendel in the first period would lead in a momentum shift, but the Ava JV couldn’t put it in.

Zach Mendel has been out most of the season after an injury to his right shoulder during the football season sidelined him until Ava hosted Conway at home on Jan. 8.

He didn’t play in that game but made his first on-court appearance for the Herald on Tuesday.

Mendel was in twice for Ava playing on the wing. Right after getting put in with less than 30 seconds in the first he ran the lane, put in two, and drew the defensive foul from Willow Spring’s Ben Clarkston.

Mendel played two periods for the JV squad and took a charge for the team near the close of the first half.

Mendel made a statement with less than 30 seconds left in regulation, shooting a clean three from the top right of the circle.

Down by five at the start of the second, two from Payton Evans and another two from the line by Mason Cole would being the Ava Bears back up a few to trail by only two.

After Ava pulled four consecutive points and broke up plays while on the defense, Dylan King smacked the ball right out of the hands of Ben Clarkston before a Willow Springs timeout would bring the JV squad back to the bench with King shouting, “Let’s go, baby!”

WENT THE OTHER WAY

The break wouldn’t come to help the Ava bench as they took two blocking fouls and had their offense broken up for costly points on top of Willow Springs’ trips to the line to lead Ava 28-18 with two minutes left in the first half.

Several turnovers were forced by the Ava JV defense, it was a lack of hitting the bucket at crucial moments which lead to a six-point deficit with seconds left to spare.

Then to add some salt to the 31-25 lead, Willow Springs’ Ben Clarkston hit a three from the left wing to close the half.

A pass from Mason Cole to Dylan King for two would crack open the second half plus three from Quinton Donley after Willow Springs answered Cole’s field goal. Donley’s swish for three closed the gap to six at 36-30.

After that the Ava offense stalled a bit with a missed layup by Zach Mendel and four points from Willow Springs would make it a ten-point game four minutes into the third period.

Twos from Mendel and Zack Miller closed it up a bit to 42-38 with just over a minute left in the third.

Then a missed pass from Donley turned the ball over with a steal from Springs’ Cody Ward with four points and an obvious flop by Mason Cole opened it back up to a nine-point lead for Willow Springs at the end of the third.

Nine points were too much to recover from, even with Ava adding 18 more points to their tally in the fourth period. However, Willow Springs had taken their lead and added on until the 62-56 final at the horn.