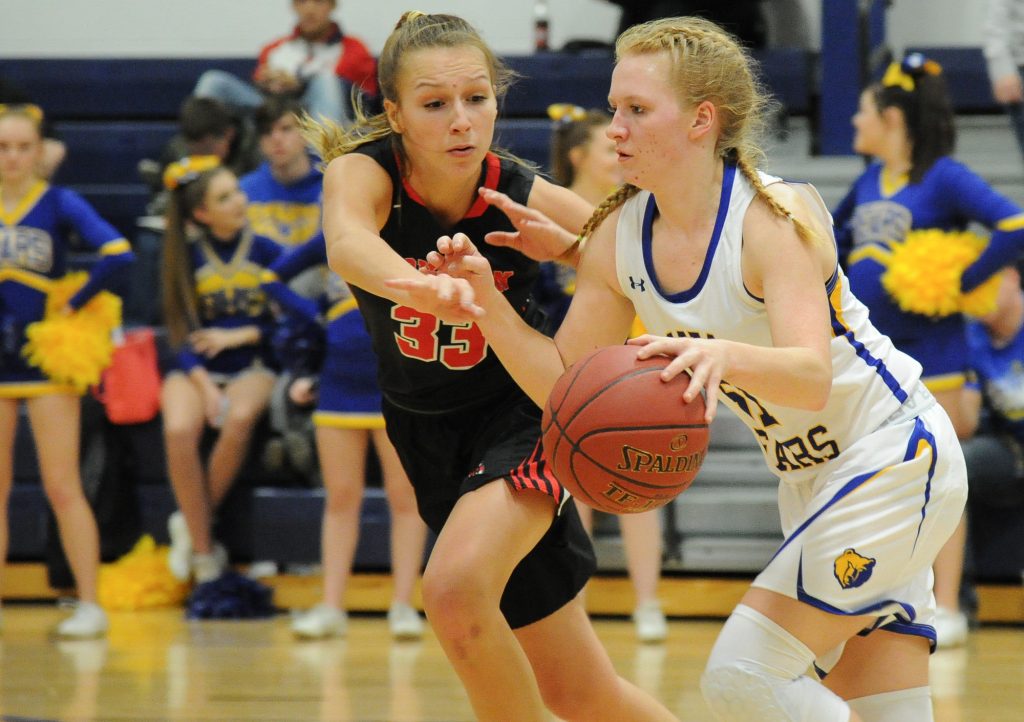 It isn’t Déjà vu, rather the outcome of tournament play and a scheduled game which landed one right after the other.

Ava was able to chip-in 16 points in the first half after pulling momentum from the tip-off and a denial of an inbound pass by Eden Little.  One minute later, Claire Fossett drew the first game foul from Houston’s Madison Curtis.

Hanna Evans tried to take a shot for three, but it bounced off the steel and into the hands of the Houston defense who passed the ball to Kelly Hubbs for the first score of the game.

Three minutes in a back-and-forth ensued after Ashton Bewley answered with one free throw.

With 4:27 left in the quarter, Houston’s Kelly Hubbs hits a two to tie the game at six and was answered with two from Ava’s Lauren Mendel who picked up the and-1, but missed the bucket leaving the Lady Bears and Lady Tigers knotted up at eight.

Under two minutes left in the period and now tied at ten, Houston’s Madison Curtis fouls Eden Little, who sunk two free throws to kick off a six-point sprint for the Lady Bears to end the period on top, 16-10.

Ashton Bewley would sink two buckets to crack open the second, shooting for eight before the break to boost Ava in the 20-5 second period.

With 5:52 left in the half, Bewley tosses the ball to Araina Evans who got two points on the board for the Lady Bears.

At 5:32, Houston lost the ball with a 5-second inbound rule violation which turned over the ball and resulted in 1-and-1 situation at 5:09 when Araina Evans drew the foul from Jaden Stell for one more point.

Araina Evans then broke up a pass which resulted in Hannah Evans shooting from outside for three points, echoed by Eden Little and Lauren Mendel for nine of the 20 second period points before the break.

“We spread our post players out and gave the guards a chance to drive,” said coach Nathan Houk. “It’s a different look and it worked out.”

Lauren Mendel is normally found in the high post, taking the pass into the paint and reaching over the defense for buckets. Houston having seen this just two days before, Mendel made her points from all around the circle, including the three-pointer made after Hannah Evans started the long-ball burst for the Lady Bears.

“We played on Saturday and we did a four-out motion with her inside and we went five-out just to mix it up so that (Houston) would not see the same look that they got the other night,” said Houk.

Ava held Houston to just five points in the second period allowing one bucket from Hanna Dzurick before the break. The other three points were made on 1-and-1 shots after Ava gave up the bonus with 2:02 left in the half.

The Lady Bears came back out of the locker room and squeezed the Houston offense even tighter, allowing zero success in the lanes and on the paint. The Lady Tigers picked up three from a single perimeter shot by Jaden Stell.

Meanwhile, the Lady Bears were still keeping up the press two with steals to open the third. Ava was unable to capitalize on the turnovers, but Eden Little made-good on the Lady Bears’ efforts with a steal and two points at the other end of the court.

Not a minute later, Ashton Bewley made a powerful defensive play by smacking the ball right after a shot attempt by the Houston offense. The turnover lead to three points with a shot from outside by Claire Fossett with 4:33 left in the period.

Houston’s Jaden Stell was in trouble after making her fourth personal foul in the third quarter. Despite hers and Madison Curtis’ eight combined fouls, the Lady Bears wouldn’t get the extra trips to the line until the last minute of the game.

With Ava leading 43-15 and the rebound needed to send the ball back to the Ava bucket, Araina Evans found herself on the floor with a Houston player on top of her and no whistle to be heard.

Shortly after the scuffle Jaden Stell made a three and it would be the last bucket she made after she fouled out at 7:18 in the fourth period.

The Lady Bears changed their offensive look after Saturday’s game against Houston, but Houk had other plans to keep the Lady Tigers guessing at what was in store.

Through the placement of Mendel, as discussed earlier, players would set and try from the perimeter. Opening lanes for drives from players like Bewley, but also pulling the defense inward when she didn’t make it all the way for open shots from around the court.

“When you go five out, you have five players on the perimeter,” said Houk. We’re going to have more opportunities to shoot threes because when we dribble in and kind of suck the defense in, it’s going to leave somebody open on the perimeter. And luckily, we shot it well tonight.”

With a healthy 47-18 lead, it was time for the starters to take a deserved break and let the junior players get time on the court to grow and mature into next year’s starters.

With Houston starter Jaden Stell out for the remainder of the game, Ashton Bewley tossed-in another two while leading the younger players on the court. Hallie Smith came up with two and Julia Henry chimed-in with four points, two from a solid performance at the charity stripe.

Ava was outscored in the fourth quarter, 13-8, but younger players need the experience that cannot be made in practice.

Ashton Bewley made 16 points, Lauren Mendel came up with 11, and Eden Little with nine. Ava committed a total of 17 fouls between the two halves, giving up bonus situations at 2:02 and 5:38 of the second and fourth period, respectively.

Ava was plus six, plus 15, plus eight and down five through each period of play.

The Lady Bears took eight trips to the free throw line, but only brought back nine of 15 points, shooting at 60-percent overall.

With the five-out offense, the Lady Bears made 17 field goals and four threes against the Houston defense.