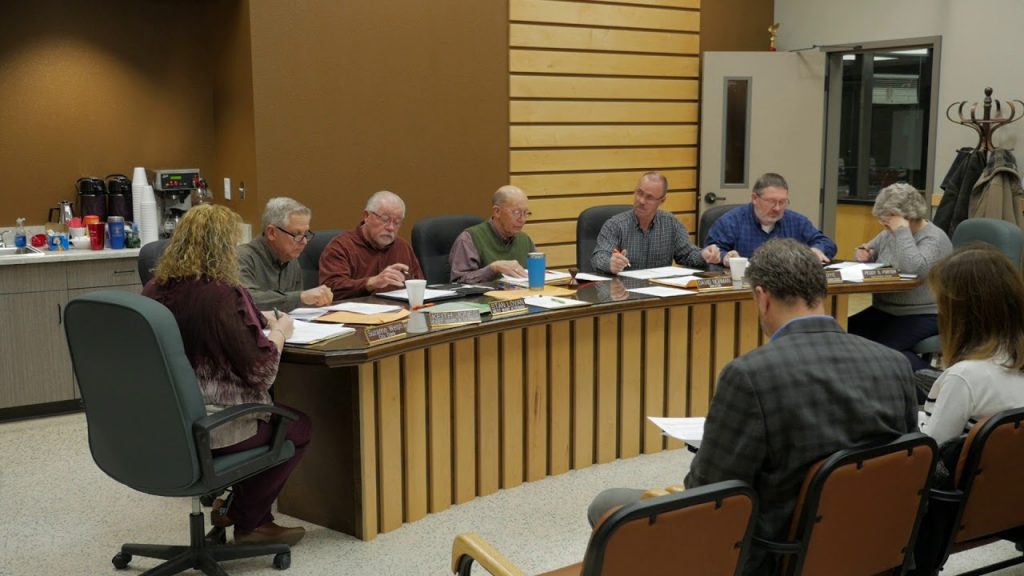 The Ava Board of Aldermen passed a new weapons ordinance Tuesday evening, and the rewrite was presented with little advance notice to councilmen, and also without notice to the public or media.

Prior to Tuesday’s 5:30 p.m. session, the meeting agenda was posted as required, and one of the topics listed for review during the meeting included a new weapons ordinance slated for approval.  The new writeup is Ordinance No. 1045, and the bill was listed for reading and adoption by councilmen. However, a copy of the document was not available for review by the public or press, access was denied by Mayor David Norman and City Clerk Suzanne Welsh.

Because the weapons ordinance has been a point of interest to several local residents, the Douglas County Herald contacted the City Clerk early Monday morning by email to request a copy so the item could be posted on the Herald website for public review.  The Herald made two additional requests Tuesday, with the final request delivered in writing.  Both requests were denied.

When the ordinance was presented during the meeting on Tuesday, Mayor Norman said the new ordinance was similar to the ‘old’ ordinance but this one is a “whole lot prettier than the other.” He also advised “hunting will be prohibited in city limits,” but if a special hunt is deemed necessary, an event would be organized under supervision of the Conversation Department.

During the meeting, Norman also stated the new ordinance was presented to several councilmen earlier that day, which contradicts his denial excuses to the Herald, excuses that alluded the ordinance was not yet written or completed.   (see editor’s note at the conclusion of this story).

The new ordinance which was passed is cited as Ordinance No. 1045, Section 62-177 and reads as follows:

Discharge of weapons, air gun, etc.   It shall be unlawful for any person within the limits of the city to shoot or discharge any bow or crossbow, gun, revolver, air rifle or air gun, pistol or firearm of any description, whether the same is loaded with powder and ball or shot or any kind of explosives, whatsoever; provided, however, the use of an air rifle or air gun and bows with target arrows (the use of a bladed, sharpened or other hunting-style heads are hereby prohibited) on private property shall be in such a manner as to not endanger the life, limb or property of others. Their use shall also be conducted in a manner as to avoid trespass onto property where permission for such use has not been given.  Nothing contained in this section shall apply to persons discharging firearms in the defense of person or property, not to legally qualified sheriffs or police officers and other persons whose bona fide duty is to execute process, civil or criminal, make arrests or aid in conserving the public peace.

The ordinance was approved in two readings with each reading garnering a unanimous vote from council.

The Board of Aldermen were not aware of the Mayor and City Clerk’s denials to release the ordinance.

During the meeting, Councilman Keith Jones expressed concern about the short timeline for reviewing proposed business items on the agenda.   Jones openly requested that the Mayor and City Clerk prepare documents in advance of meetings so the aldermen have access to the agenda, proposals and meeting packets on Fridays, thereby receiving everything prior to the Tuesday meetings.  He noted this format allows time to review and research items prior to the formal meeting.

During closed session, council unanimously voted to discontinue the City’s municipal court proceedings, and instead, transfer cases to the associate circuit court for adjudication by Judge Elizabeth Bock.   According to City Clerk Suzanne Welsh, the current Municipal Court process will continue through the month of February, but the paperwork process should be finalized soon thereafter.  A date for the transfer was not provided.

Bids for the construction of a new city electrical building were opened on Tuesday with two bids submitted for the project.  After evaluating submissions and upon the Mayor’s suggestion, council opted to reconfigure the specs by removing unnecessary requirements and resubmitting new specifications to the two contractors.  Mayor Norman said Dave Frohling of Gaskin Hill will revise the building specs, as well as contacting the two bidders about submitting revised bids on the project.

In a 4-0 vote, council approved engaging Carl Brown, a former Department of Natural Resources employee to evaluate the city’s current water and sewer rates.  According to Administrative Assistant Peggy Porter, Brown was the author of the city’s prior study which cost approximately $9,000 several years ago.  After that assessment, Porter said the city implemented some of Brown’s suggestions, but not all, as some recommendations were too extreme.  She said the auditors highly recommend a water and sewer rate analysis every 5-7 years, and it is timely for the city to engage Brown but this time the study will cost $14,486 for an analysis of both the water and sewer systems.  Porter advised Brown would provide the report by June 1, prior to the finalizing budget number in July.  Council opted to engage Brown for the project.

Alderman Keith Jones commented the rate analysis completed five years ago showed a 30% water loss, and implementing this follow-up report will be beneficial in establishing a benchmark for the City.  He said he attended a water conference in Springfield several years ago, and Cassville had facilitated an analysis to discover a 30% water loss as well, and their report revealed their meter system was not accurately capturing usage.  Cassville was then able to take action and cut monetary losses to 12%.

Motions to engage Brown were by Keith Jones and Burrely Loftin.

Mayor Norman reported he was presently working on a noise ordinance for truck jake brakes, as well as an ordinance that will stipulate voter registration as a requirement for city office.  At present, Norman said candidacy requirements dictate a one-year residency within city limits and a 25-year-old age requirement.  It does not require candidates to be a registered voter.

Norman also revisited the idea of installing way-finding signs that would promote specific points of interest within the city.  The signs would be approximately 2 ft. x 4 ft., and recognize locations such as the Ava Cemetery, Douglas County Courthouse, and City Hall.

In a note of appreciation, the Douglas County Missouri Firefighters Chief Association presented Peggy Porter with a medal of appreciation for helping the group with grants and funding.  The medal was presented to Porter by West Ward Alderman Noel Dye.   Alderman Burrely Loftin also presented Mayor David Norman with a plaque from the Douglas County Missouri Firefighters Chief Association honoring the city for its assistance in supporting the local department.  Loftin had accepted the award on behalf of the City during the firefighters graduation ceremony which was held Saturday, Jan. 19.

Editors Note: Following council meeting Tuesday, the Herald consulted with an attorney in Kansas City who specializes in Sunshine Law.  Her response on the ordinance denial issue was that “the City was absolutely wrong [to deny access to the document].”  She advised if a document is requested, it must be made available even if it is not the final form. A temporary record is a public record, and this finding is an opinion handed down through the court system.

In conjunction with state law noted above, the Freedom of Information Act (FOIA) also  insures public access and transparency.  The Act states, “virtually every document generated by an agency is available to the public in one form or another…”

The City was wrong to deny access to us, which in turn denied access to the public.