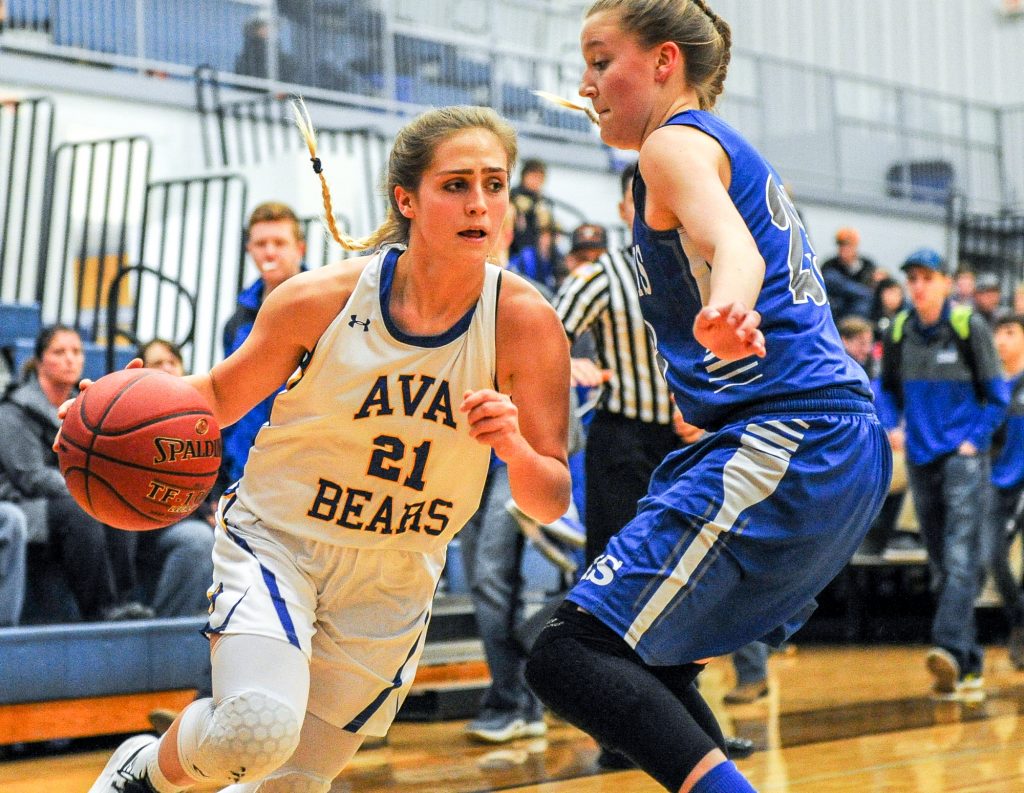 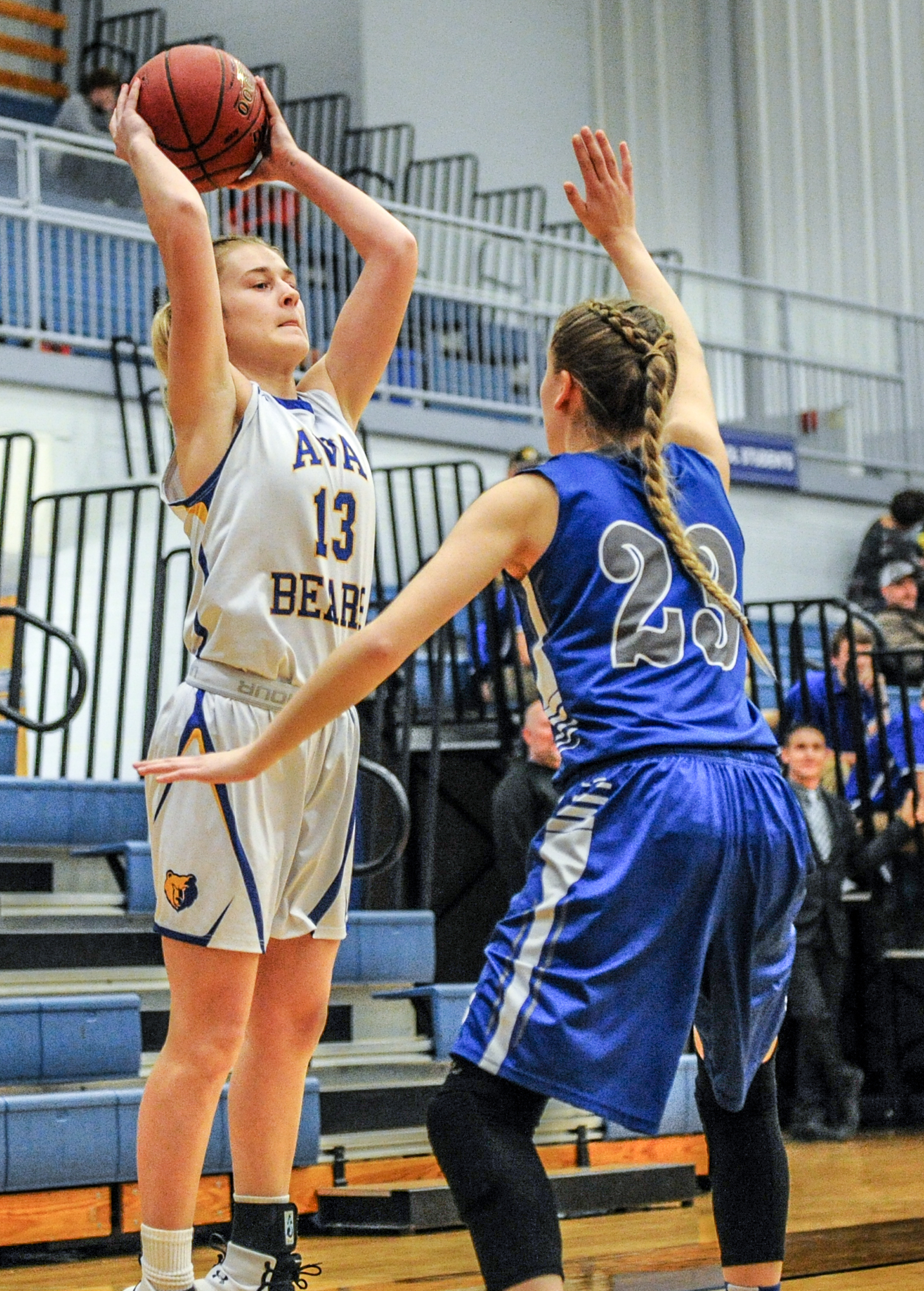 Ava High School’s Claire Fossett (13) reaches up to pass the ball inside to a teammate during the championship game of the Cabool Classic Tournament Friday, January 18, 2019, in Cabool, Missouri. (Jason Hoekema/Douglas County Herald)

CABOOL – Earning the top seed and a first-round bye, the Lady Bears were able to top Cabool  – at their own tournament – for a spot at the championship game on Friday, Jan. 18.

On Tuesday, Jan. 15, while the boys’ squad was in Theodosia, the Lady Bears delivered a 66-52 loss to Cabool putting them into the championship-game bracket against Koshkonong High School.

Koshkonong (11-5) is a Class 1 school according to the Missouri State High School Athletics Association website. Both Koshkonong and Ava have lost to Thayer this season.

Before the tournament the Lady Bears were on a four-game losing streak, all while on the road. With a 7-6 record and sitting sixth in the Class 3, District 11 standings, the win over Cabool was just what the Lady Bears needed.

Claire Fossett and Emaly Keyes lead in scoring for the Lady Bears with 14 points each, aided by 11 from Hannah Evans and ten more from Lauren Mendel.

The Lady Bears pulled-in 19 points against Cabool’s 13 in the first quarter for an early lead. Fouls found and bit Cabool, allowing Ava to bring in six free throws to start the game.

Those fouls would continue to rack up against Cabool, making only seven back from the stripe the entire game while Ava made 19 thanks to Lady Bulldog’s charity.

Ava out-shot Cabool from the stripe, earning 58-percent of the 34 shots taken on fouls.

Into the second quarter, Claire Fossett would chip-in four with two from Araina Evans, Mendel and Bewley for a team total 12 points. Cabool’s Katlynn Ellison would lead the Lady Bulldogs in scoring with 24 points through four quarters, aided only by Jose Atkins with 11.

Into the half, the Lady Bears would maintain a narrow 27-31 lead.

A bigger second half for the Ava bench would ultimately spell a loss for Cabool, who would put up 23 second half points to Ava’s 35.

Hanna Evans was able to shoot for eight in the third quarter, followed by seven from Bewley in the fourth.

Ten more fouls would come to hurt Cabool with the Lady Bears taking advantage of nine trips to the stipe for 10 points and a 66-52 win for Ava.

On Friday, the Lady Bears started their warm up. Rested since their Jan. 17 game against Conway was rescheduled for the 26th.

The opponent warming up at the other end of the court was the Koshkonong Lady Blue Jays. The Class 1, District 3 school boasted an 11-5 overall record and made their way to the championship bracket by way of Couch and Bakersfield High Schools.

The first quarter was contested by the Lady Blue Jays, who kept pace with the Lady Bears and scored ten to stay within three of Ava at the end of the quarter. A slow start led to the first point of the game to be scored by Eden Little on a two-shot foul drawn from the Lady Jays.

Hanna Evans found herself open for a three while Ashton Bewley started feeling-out the defense by running in along the baseline and through the paint for seven points in the first. Evans would pick up an assist on a pass to Bewley for two points.

Moving into the second quarter, the Lady Bears would tack-on another 13, seven from Bewley. Lauren Mendel would begin her scoring run in the post, putting up four before the half.

The Lady Blue Jays started gaining on Ava, outscoring them 15-13 in the second quarter to make it a one-point game at 26-25 going into the half.

The work under the Koshkonong bucket was too much for the Lady Jays to figure out on their own. Coach Charlie Ballard spent both his 30-second timeouts to try and crack through Ava, making eight and another seven on the one-and-ones courtesy of the Lady Bears.

Koshkonong’s Callie Sturgeon opened the second quarter with two, answered by Bewley with a three pointer with 5:30 left in the half. The back and forth would ensue for a total of 22 points before some foul trouble found Little on the bench after giving opponent Britney Russell two shots at the bucket.

Fouls stacked up with 1:04 left in the half, allowing a bonus situation for Koshkonong who drew another four points from the Lady Bears.

At half time, with just a one-point lead, the Lady Bears went into the locker room to figure out how to shake the Lady Jays who were shooting 90-percent from the stripe in the first half.

The Bears had the foul drawn by Little in the first quarter and a one-and-one for two points made by Bewley, who racked up 14 before the break. With only two trips to the charity stripe and shooting at 75-percent, the Lady Bears needed a plan.

Back out of the break, Ava got the ball from the alternating possession rule to restart the game. Koshkonong’s Sharee Gastineau pulled a foul from Bewley but missed both shots, leaving energy and momentum on the court for either team to wrangle.

Lady Jay’s Sturgeon gets her hand on a steal and turns the court over on the Lady Bears but winds up getting an offensive foul call after charging on Hanna Evans, who planted her feet just in time to take the hit for Lady Bears.

Bewley sunk-in a three, and the rest broke loose from there. With no leading scorer and the Lady Bears making plays and points, the lead opened to eight points after 17-combined from Fossett, Bewley, Araina Evans, and Lauren Mendel.

During the third quarter, the Lady Jays offense went stale several times, unable to make plays as Sturgeon idled at the key.

The stagnant offense forced the Koshkonong coach, Charlie Ballard, to do something most coaches wouldn’t with more than 11 minutes left in regulation. He called his final two time outs a mere eight seconds apart as he tried to get his squad moving to close the score gap.

“Well, it was really a numbers game,” said Houk. “Our defense, I felt like just if we just kept at it, it would wear on them and we were going to be able to go on a couple runs in the second half. That happened, we got up by eight and then 12 then they hit a three and then we got up by 12 again and just kept building from there.”

Bewley opened the fourth quarter with two and would have another five before the night was done. She could have scored again but opted to make the pass to Fossett for the assist.

“Either way we can score, said Bewley. “It’s always good to share the ball and when she’s wide open, I’m hitting her.”

The selflessness would pay off  in a deflating turn of events for the Lady Jays as Fossett drew the foul for the and-one to make the game 48-37 with 6:40 left.

On the next possession, Fossett got stuck under the basket with an offensive rebound and had no way to pass or move. With one last-ditch effort she leaped up and the whistle blew.

In less than 20 seconds, Fossett had drawn two fouls and the Lady Jays were on their way to a total of 16 second-half fouls, giving up the double bonus with 6:50 left in regulation.

The whistle, again. And again. Ava committed just six fouls in the second half, but the calls were drowning the Lady Blue Jays with the Lady Bears taking seven points from the charity stripe.

At the buzzer, the Lady Bears had picked up 23 points in the fourth to end the game with a commanding 66-46 lead over Koshkonong.

The Lady Bears won the Tournament, but the accolades did not end with the horn. 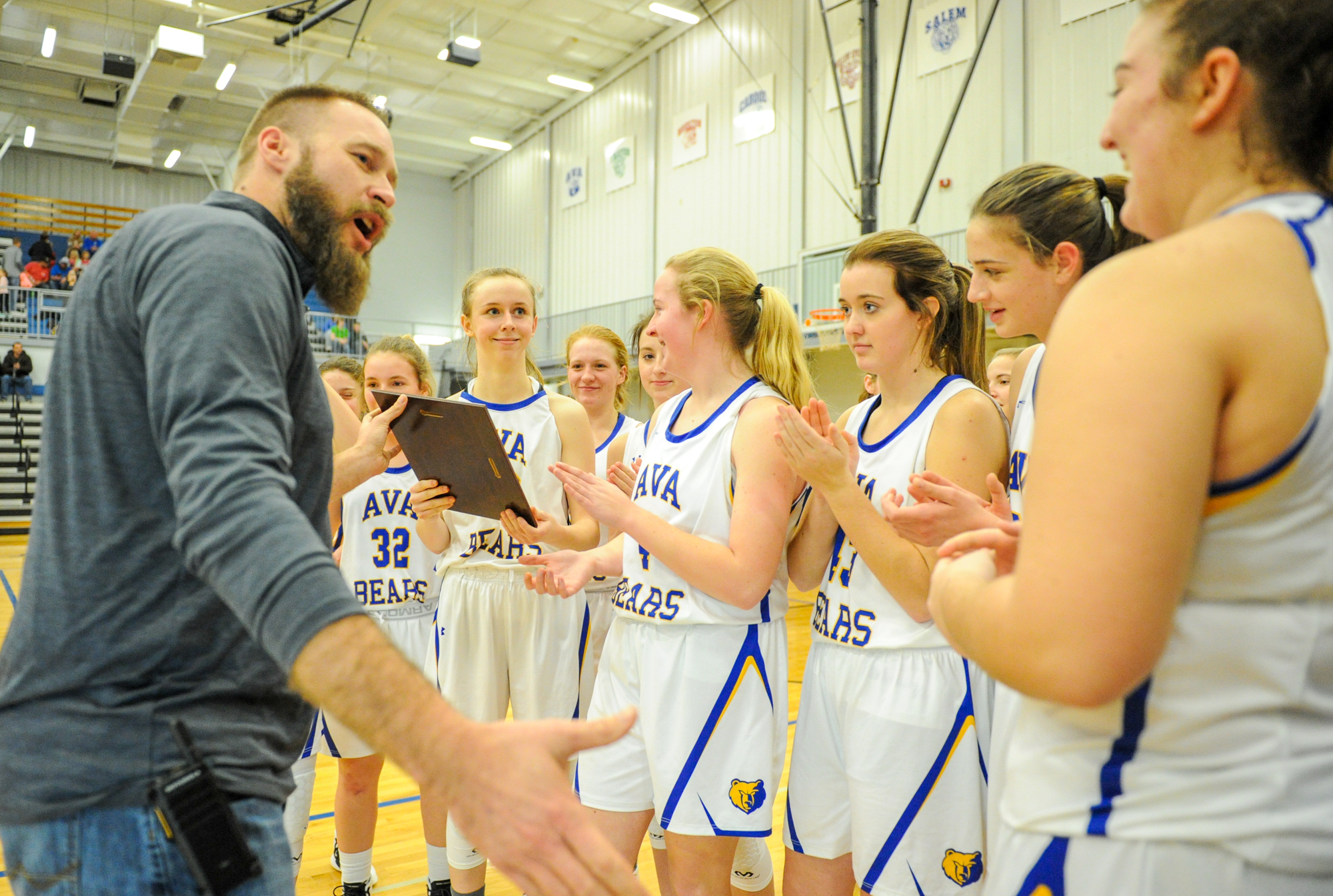 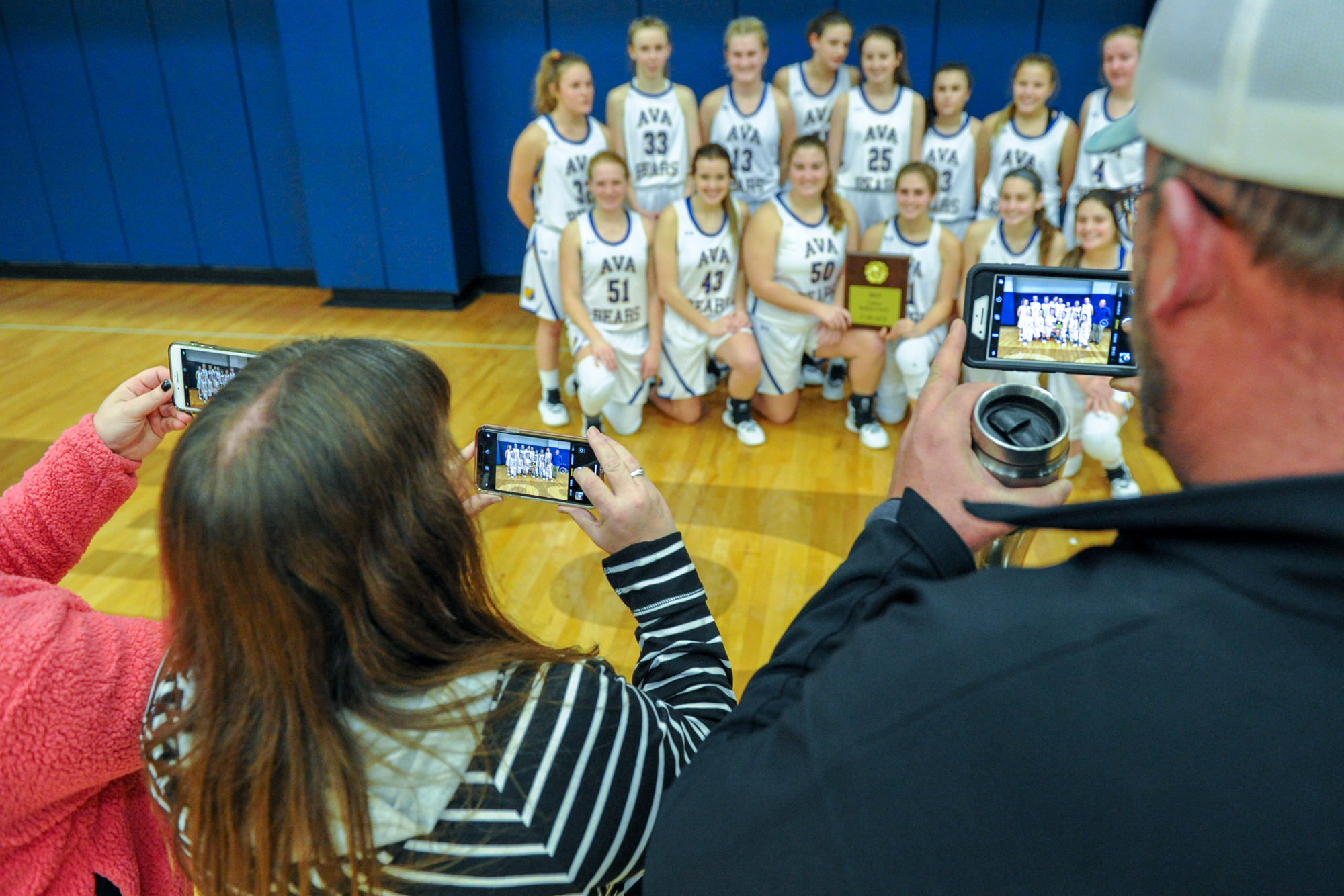 Parents snap photos of the Ava girls basketball team after their win over Koshkonong to win the Cabool Classic on Saturday, January 18, 2019, in Cabool, Missouri. (Jason Hoekema/Douglas County Herald)

“I’m really happy with the girls so far, this is our second tournament and we’ve got third in one and first in this one,” said Houk. “We have the Mansfield tournament next week so hopefully we can get a couple of wins in it and do well in it as well.”

It was a big win for the Bears, who received a plaque for the trophy case back in Ava.

Ashton Bewley made a career-high 28 points in the same game that won the tournament for the Lady Bears. On top of that, she was named the tournament MVP and named to the all-tournament team.

“It’s an honor and I couldn’t have done it without my team. We all played, we all came out with the win,” said Bewley. “It was crazy, I was excited about it. It was a good game.”

“She really got going in the second half for us offensively and hit some big shots,” said Houk. “She was able to help the rest of our team extend the lead.”

Lauren Mendel was also selected for the all-tournament team with ten points and numerous rebounds for Ava.

“I worked hard for it, so it’s been something to be proud of,” said Mendel. “I just try to keep pushing knowing that I want to be the best. I don’t want to let anybody outwork me. I know that, back in my head.”