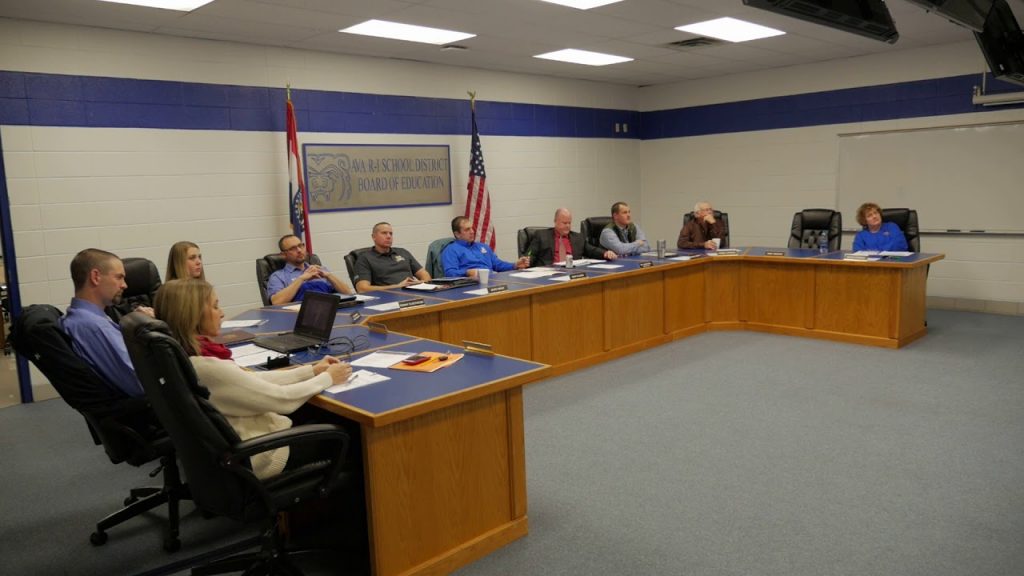 Larry Vinson, speaking on behalf of the Bus Route Owners Association, asked the Ava R-I School Board last Thursday to reconsider hiring  TransPar School Bus Consultants to audit the current student bus transportation program.  He stated the prospect of attaining an unbiased, accurate accounting of the student busing system should be a concern of the district, as well as the school board.

In October 2018, with a 3-3 tie vote, the board failed to agree on whether or not to engage TransPar as an outside firm to audit Ava R-I’s transportation program.  The argument for voting against the option, as stated by Mark Henry, Bart Ellison and Michael Stewart, was that they were against spending money to cover the expense.

Last Thursday, Vinson announced the bus route owners are prepared to pay $2500 of the $5000 total cost required for TransPar to conduct an audit and analytical overview of the student busing system presently in operation.  Vinson noted the audit is important as bus owners would like to have an objective assessment that will provide accurate figures and documented information useful not only to them, but also to the school board, the district, and members of the community.

Vinson noted incorrect information is still being disseminated on social media as well as within the community, and some of those invalid  statements can be attributed to comments made in prior school board meetings.  He said the Association is asking for an audit so incorrect statements and accusations can be laid to rest.  Vinson said it is time for the longstanding divisive issue to be resolved.

He asked the board to consider their offer to split the expense of the audit, especially since cost was the only roadblock previously given by the three board members who voted the idea down.  In closing, Vinson asked the board to engage TransPar to analyze the current transportation system.

Board member Lowell Strong acknowledged there is still a big divide on the board regarding the busing issue.  He said “some people think drivers are over paid, others don’t. The magic word is think.  If we do this, we will have facts and figures to deal with and maybe we can put this issue behind us.”

Board member Deana Parsick noted, “Cost was an issue before, but this offer [from the association] is more than generous.”

In a 4-2 vote, the board approved engaging TransPar to audit the current program.  Motions were made by Strong and Parsick, with Parsick, Strong, Kenny Fleetwood, and Mark Henry voting in favor.

Bart Ellison and Michael Stewart voted against the audit.

Dial added this is the first year Ava R-I is able to include pre-school students in the reporting process and add their attendance hours and disability needs to the accounting totals for funding.

Assistant Superintendent Aaron Dalton reported administrators have received testing data from last year, however, the school is unable to release the information to the public until Feb. 1. He advised results have been shared with principals and teachers, as the data is being used to review instructional processes and curriculum maps to better serve the students.

Dalton said preparations are underway for an upcoming professional development day scheduled for Monday, Feb. 4.  The morning session will provide information about new requirements associated with health screenings for next year, and in the afternoon, the staff will participate in intruder training instruction.

Dalton said 28 students engaged in the A+ tutoring program during first semester.  For this semester, however, interest increased as 58 students are currently assigned to middle and elementary school classrooms.  At present, he noted, 70 students in the senior class are on the path to qualify for the A+ scholarship program.

School board members approved the annual Technology Program Review as presented.  The report cited the following purchases and upgrade expenses: $1,000, web page; $15,000, supplies; $4,000, capital outlay; $16,000, upgraded surveillance system server; and 475 Chromebooks purchased for the 1 to 1 program in the high school.  The 1:1 Student Technology Initiative promotes student engagement by giving students their own mobile-computing device to use.

Jon Doane, technology director, said the school has made significant gains over the past five years.

The community involvement program review, and a list of school  personnel contacts for federal programs, were adopted as presented. The vote was 6-0 on both items.

The school board voted to hold their reorganization meeting, which follows the spring election, for Tuesday, April 16, at 6:15 p.m.  At that time, the board will install two newly elected members to the board of education.  According to Article VII, Section II, of the Constitution of Missouri, RSMo. Section 162.301(1), the oath of office action must occur within 14 days of the election.

The school board is scheduled to reconvene Thursday, Feb. 21, 6:30 p.m. in the boardroom on campus.  Meetings are open to the public.