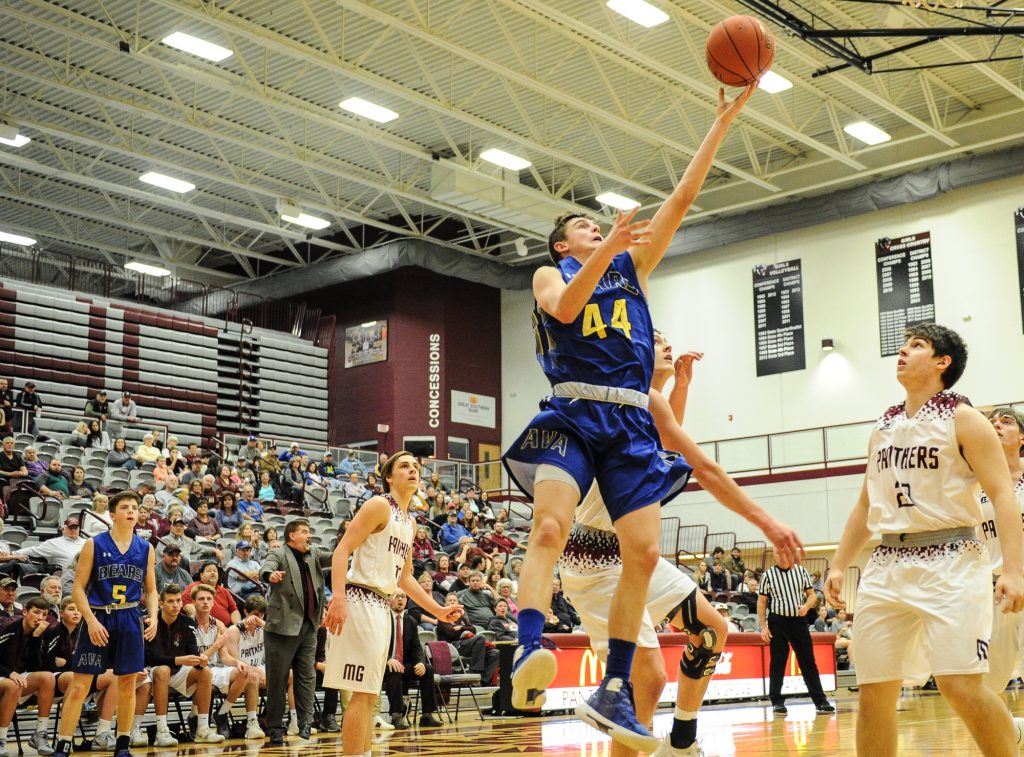 MOUNTAIN GROVE – The Ava Bears came off a feel-good win over Lutie last week, blasting the opponents with an 84-17 win, but the Bears had some unfinished business to attend to in Mountain Grove.

The Bears were scheduled to play the Panthers on Friday, Jan. 11, but a weekend of freezing rain and ice got in the way courtesy to Winter Storm Gia.

On what would be a normal practice, or even a rest day before welcoming Sparta on Jan. 18, the Bears made the drive to tie up the loose end. With five games in just two weeks, it was a little more wear than the Bears would normally have to recover from.

“I appreciate the effort (of the players), and we just we just got to keep going,” said coach Mike Mallow. “You know we got Sparta tomorrow night. Three games in four days, the way we play”

Despite the heavy schedule and playing three matches just last week – including one at home against Sparta on Friday – the Bears still took the fight to a South Central Alliance competitor and rival, the Mountain Grove Panthers.

Ava hasn’t been able to top the conference favorites in the past years, but came close with just a 5-point margin at the buzzer. A sort-of statement for the next season.

The Panthers came out in force in the first quarter, leading Ava 19-10 at the first buzzer of the game. As usual, fouls would come into play for both teams, Ava being the first to give up a bonus situation with three minutes left in the first. 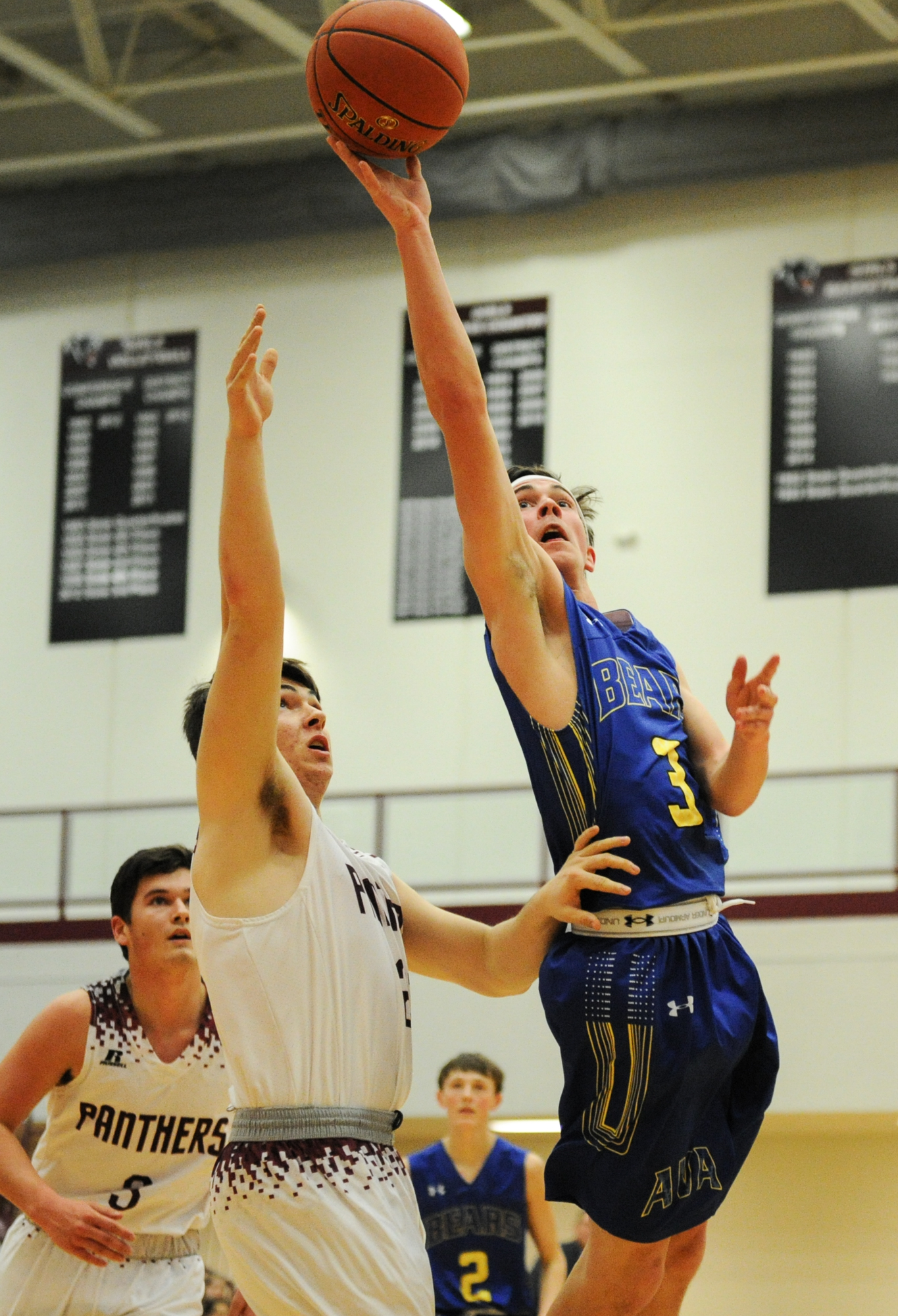 Those fouls would only amount to a growing number of dots in the scorebook which grew from four in the first to 18 in the fourth for the Panthers.

“Well they’re pretty good with the ball,” said Mallow. “You’ve got to give them some credit, they did some good things with the basketball in there and as time went on they beat us to the bucket some.”

Andrew Dalton lead the night with 34 points, practically unstoppable once he started to the rim. In the first quarter he served up six on top of a three from Kaden Bruce and a charity point on a foul drawn by Nate Swofford.

Mountain Grove’s Dylan Massey would come up with eight, aided by two from Rhett Wakefield and John Felker who would pull four more from the stripe.

Trailing by nine into the second quarter, the Bears found their footing and outscored the Panthers 25-22, coming as close as a 2-point margin thanks to two swishes by Swofford at the charity stripe.

It wouldn’t be the first time Ava came close to taking a lead, but with a double-bonus given to the Panthers 37 seconds into the second quarter they wouldn’t be able to grasp the go-ahead.

With the quarter in full-swing, the Bears defense was able to limit Massey to just two points from two trips to the line, effectively silencing him after putting up eight in the first.

Bryce Lauderdale would make up the difference with two threes and a layup in less than a minute, gaining momentum for the Panthers. Another three from John Felker would add to the Panthers’ tally of 22 points in the second.

The Ava offense was led by Dalton with 10 points, plus five each from Caleb Johnson and Swofford. Twos from Mason Cole and Kaden Bruce would rack up the numbers to maintain the six-point deficit going into the half.

The Bears gave up 15 fouls in the first half, with several starters staring-down three fouls after the break. Trailing by six at the end of the half, the Bears took to the court and were able to match the Panthers at 22 points in the third quarter.

Bruce would sink two threes, helping shake some of the defensive confidence the Panthers had, and Blake King would toss-in for five points with a three and an under-the-rim handoff from Dalton for two points.

Dalton still had a run of the Panther defense with 11 points in the third. He would also pick up an and-1 to close his third quarter performance to show that the Bears were not done yet.

“I think we kind of started getting tired,” said Mallow. “And we didn’t step-down and we should have. I felt like the effort was good and we did a lot of things well, but just couldn’t get over the hump.”

Cue Dawson Hiler. A kid that missed just one free throw the entire night with nine trips to the stripe. Shooting at 94-percent, he served-up many of the final nails to close the crate on Ava.

Hiler sent in just one on-clock shot for three, his other 17 points? All free throws.

“Hiler shoots like 90 percent from the free throw line,” said Mallow. “We put him on the line like 18 times (and we) got to do a little better job with that.”

A foul-ridden fourth quarter was afoot with the whistle irritating both coaches. Mountain Grove coach Duane Hiler would mutter, “put the whistle in your pocket,” as a referee passed by.

“We could have chosen to drop back and play more half court, but we really thought our advantage was our bench and we could wear them down,” said Mallow, and it showed.

The Mountain Grove team was getting worn out while the Bear defense surged for 31 points in the fourth quarter and worried some Panther fans as the game came within two points with 4:53 left in regulation.

“We can’t let freshmen beat us,” one woman said as she conversed with other fans.

Then things turned in favor for the Panthers. Late into the fourth quarter, the Bears started dropping out of the game with five fouls. In total, five key players would get the fifth whistle and have to sit out the rest of the game.

Luckily, each player was able to inflict some damage before they went.

Blake King delivered six points, Swofford four, Mason Cole three, and Bruce with two. Fifteen team points were delivered before the four were benched. Caleb Johnson was the fifth to be fouled-out on a frustrated grab to make the final minutes an eternity for the Panthers.

With five players benched in the fourth quarter, the damage would be returned at the charity stripe, for 29 points in the second half. In total, the Panthers would toe the line 54 times, shooting 80-percent to make 43 points on the Bears.

Andrew Dalton would end the night for the Bears with a triumphant three from beyond the arc to close the margin to five and end the night trailing 92-87. Note that Dalton has three more years of fight against the Panthers in the South Central Association.

Aside from the five foul-outs, there were some Bears missing from the bench Thursday. The Mendel’s have been stuck at home with a flu-like illness according to Mallow.