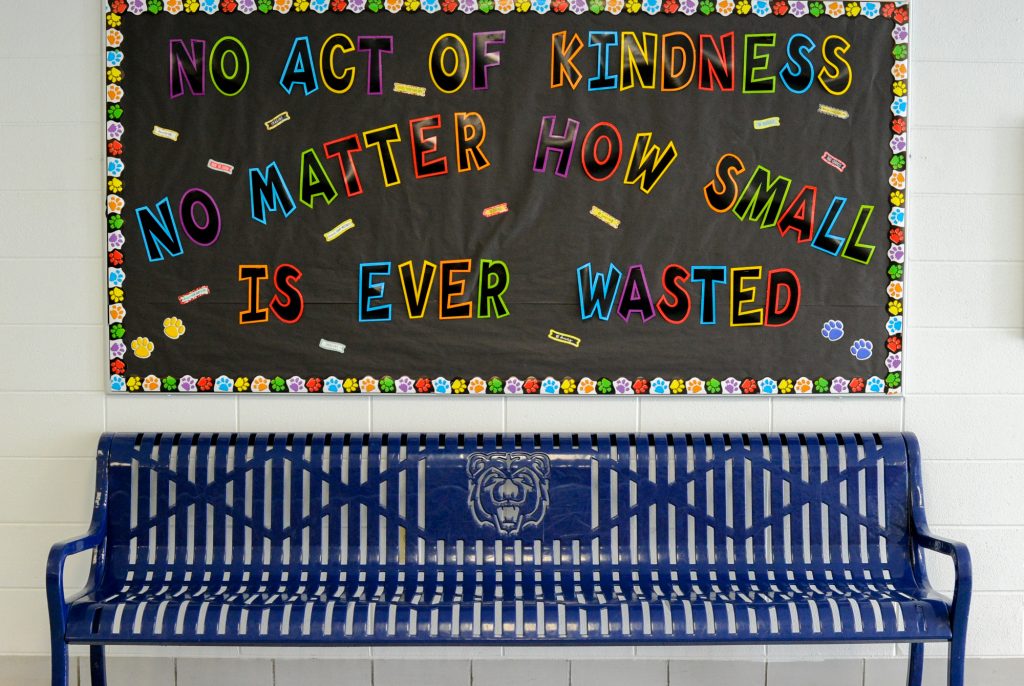 A board displays a positive message to students in the hallway of Ava High School. The school district has implemented state-mandated awareness and prevention classes and materials for students who may be depressed or for friends who may notice negative changes in their social circles.

Adolescence is tough. It is trying, and it is filled with challenges and lessons unique to young people as they grow and mature into young adults.

Many things have changed between generations. The introduction of social media and the world via wireless device have added complexity along with inescapable stressors and problems to the mix.

The result, higher rates of depression and suicide among young people.

The idea of one taking their own life is grim and usually not a welcome discussion topic, but communities are beginning to embrace talking about it in hopes of lessening its occurrence and the fallout which follows.

Teens are not the only demographic affected. In fact, suicide rates have increased more than 30-percent in half of the U.S. since 1999 according to the Centers of Disease Control and Prevention. Since 2016, more than 45,000 lives have been lost by suicide.

In the State of Missouri, rates have risen 31- to 37-percent in the last ten years. Suicide is a reality of today’s adult-living and is unfortunately, now a reality of growing-up.

Now that suicide is one of the top ten causes of death in America, community leaders, clinicians, and counselors have all been working to end the stigma and bring light to an otherwise dark topic.

The risk has long been present in youth and the counselors in the Ava R-I School District are doing something about the second-leading cause of death in youth between ages 10 and 24.

In recent years the high school has seen three suicides at a rate of about one per year and counselors are also sensing changes in the community’s overall mental health.

“Obviously it’s a big need in our country, but there was a new state statute that required schools to provide some kind of suicide prevention training for fifth through 12th grade,” said Melton.

“I think this overall as a community we were seeing an increase in mental health issues,” added Kati Burkdoll, the high school counselor.

Since the implementation of the Signs of Suicide program, students and parents have been receptive and become in-tuned to the lives of other. This year there have been no suicides within the school district.

“I feel like we have (seen success), and I feel like our kids are a lot more preceptive to what’s going on in their friends’ lives,” said Burkdoll.

“I’ve had many middle schoolers since the training come visit with me to report and acknowledge that their friend was talking about suicide,” said Melton. “So, we’re seeing some fruits of our training.”

Knowing signs or symptoms of depression and teaching students to “ACT” when they notice something is part of a community-based approach to mental healthcare. Different scenarios are taught to students, who in-turn learn what to look for in the people they spend time with.

“Acknowledge that someone might have a problem. Care, let them know you care. Then tell a trusted adult,” explained Melton. “Those were the three things we kind of taught over and over.”

Suicide is the second-leading cause of death in youth between ages 10 and 24, according to the CDC. More than half of suicides are completed by individuals who did not have a known mental health condition, making knowledge of the conditions leading to suicide, the best way to combat tragedy.

“We’ve seen the hurt from some of those suicides that our community has faced,” said Cara Roberts, the elementary school counselor. “We want the information out there and want to help as much as we can.”

The Signs of Suicide program is a school-based awareness and prevention program which has shown improvements in Suicidal Thoughts and Behaviors and the “knowledge, attitudes, and beliefs about Mental Health.”

“I think the program helps break the barrier of (stigma) in society because everybody’s talking about it, said Burkdoll. “Every once in a while, there’s still a stigma. There are still parents (who don’t want their child to go to counseling). But the more we talk about it, the more the stigma is breaking.”

The program bases its success in creating a culture of positive bystanders, or individuals who may see the signs of suicide in a friend or classmate. The program also encourages students to self-refer or make “trusted adults” aware of the situation so an intervention can be made.

The program comes with a screening tool that counselors have students fill out (with parent permission). The tool is similar to what medical doctors and therapists are using in daily practice.

“Everyone’s getting involved with it,” said Burkdoll. “Before you can even see a doctor, they’re looking over a depression screening.”

“I went to a physical yesterday and I had a screening,” added Melton. “It’s normal now.”

The training material was introduced to students via classroom instruction. Counselors spent a full day training with students covering material from the SOS program.

“(It is) one of the best programs out there after all of our research,” said Melton. “We had one of us will go in for two days and teach the lessons to talk about prevention and what it looks like.”

Some information was made available to parents, including talking points on determining the difference between a bad mood and depression. Parents are instructed to look at mood severity, duration, and how it affects their child’s life.

One cause of depression and teen suicide is bullying, something Burkdoll is trying to push out of the high school using a campaign to spread kindness.

“Just go out of your way to be kind, said Burkdoll. “Throw (kindness) like confetti because confetti is fun and it falls and all kinds of places”

Materials provided by the counseling team at the Ava School District show that bullied kids do not always reach out for help.

Often, thoughts of bullying go to physical altercations or vandalism of a student’s property. Today the Internet and the multitude of social media platforms adds to the already-growing problem.

Bullying can cause severe anxiety, changes in eating habits, sleep difficulties, aggressiveness, or even disciplinary issues in the victim. The generational difference lies in the inapplicability of the source during after school hours.

With platforms to spread negative messages, bullies can and are entering the household sanctuary victims normally feel safe in. It can come in messages, disappearing social media posts, and email.

“Our policy says that we can’t be friends with students on social media, said Burkdoll. “So if it’s a teacher receiving something it’s because a parent or someone sent it to the teacher to pass-on. But we are teaching our sixth graders about digital citizenship.”

Teenagers can often disconnect from parents during adolescence as they become more independent and self-sufficient. However, teens may go to measures to conceal problems from parents or can find themselves inadequate in comparison to others on the Internet.

“We’re giving the kid the world in their hand,” said Melton. “It needs to be monitored.”

There are applications which appear to be one thing but transform to another when used by youth. They range from photo vaults disguised as calculators to messaging apps which encrypt or conceal messages.

“There’s a calculator app that’s out where you can hide pictures that you wouldn’t want on your camera roll,” said Burkdoll.

The counselors want to put an end to bullying in the schools.

If it’s going on at school, we’re asking kids to report,” said Cara Roberts. “We want them to tell a trusted adult and then hopefully that trusted adult can (determine) if it’s identified as bullying. Then we’re reporting that to our administration and there’s a whole process that they are going through where they’re interviewing students involved.”

“If they report it there’s a checklist that our administrators go through,” added Melton. “It has to be reported and investigated. I think this program – that we talk acknowledge, care, tell – also works for bullying. Not just suicide, but threats of violence or different things. So we’re kind of stressing that to our kids. It’s not just for suicide or depression, but if you see someone being bullied. They probably get tired of (classroom training), but I say do it again. Because the problem is not solved.”

When a student makes a statement or makes a threat of self-harm, there are measures in place to ensure the young person is cared for and that parents are made aware of the situation.

“I think within our county to have a great working relationship with Children’s Division, law enforcement and ambulance services, said Burkdoll. “There have been situations on the weekends where we’ll have teachers tell us that a student posted (something) on social media and we can always call our county and (ask for) a little check They’re always good about calling us back. So it really is just a community effort.”

“We have good relationships with our MOCH, added Roberts. “I feel like with our MOCH, the counselors, and the physicians in town… That we’re all trying.”

While in school, students are pulled from class if reported, or can go to the counselor directly if a life-threatening mental health concern arises.

According to the counselors, students are never left alone and parents are called-in to make a safety plan to help prevent attempts.

(“We tell them to) make sure you don’t have any medication that’s out. Make sure guns are locked. Simple things such as razors or shaving razors, make sure those are up and keep an eye on them. If you see a spike in aggression or anything like that here some numbers. You can take him to the ambulance station and the ambulance will transport them to (a hospital) It’s immediate, getting parents involved.”

Resources for Parents and Community Members:

Centers for Disease Control and Prevention: