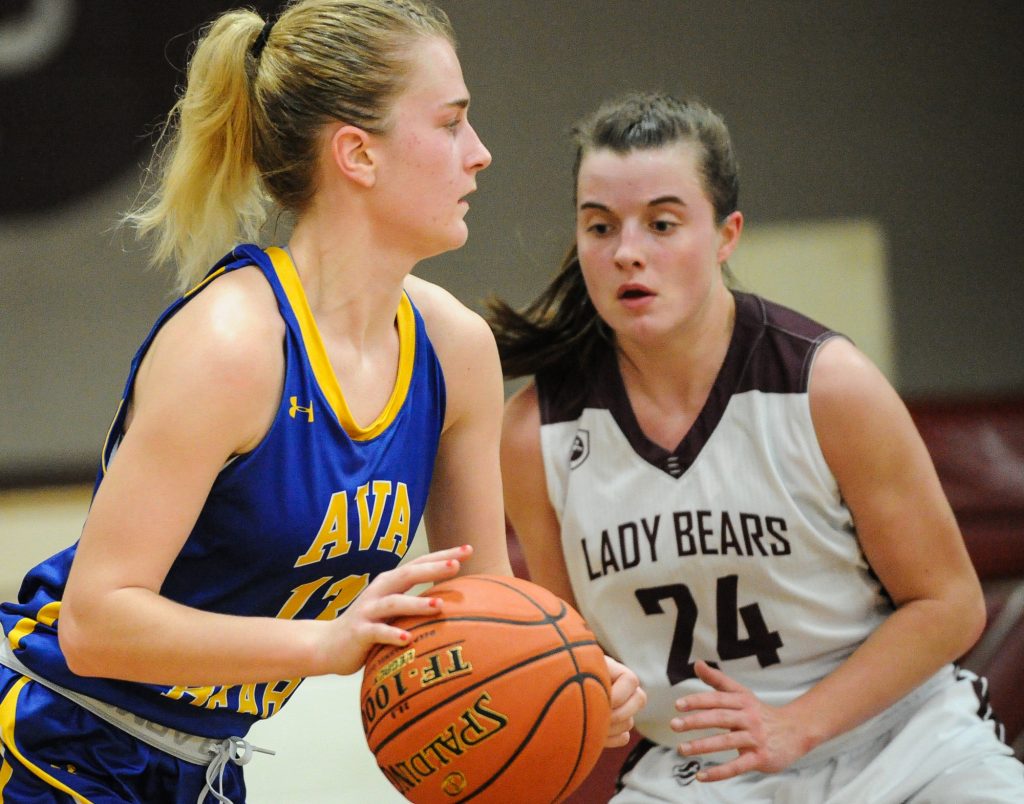 A loss may not be something one expects with a positive outlook but when you look past the score there are a lot of moving pieces working toward the right direction.

The Ava Lady Bears dropped their third-straight game on the road against SCA Conference rival Willow Springs on Monday, Jan. 7.

This 63-61 loss moves the Lady Bears down to 7-5 in their overall record, but the challenge of facing Willow Springs was expected.

Willow Springs came into the match with a 10-4 record and several blowout wins to match.

At Munford Gymnasium in Willow Springs, the Ava bench took to the court with familiar starters in Claire Fossett, Ashton Bewley, Hanna Evans, Lauren Mendel, and Eden Little on the court at tipoff.

Evans at 5’8”, tipped the ball back to a teammate to start the competition.

Behind by one bucket in a 14-12 first quarter, it quickly became apparent that an entertaining ball game was about to unfold.

Bewley put up nine including three from the stripe on fouls pulled early from the Willow Springs squad.  Araina Evans would chip-in two more and take a point from the stripe in the first quarter.

The game was intense with Willow Springs moving up and down the maple at break-neck pace, something Ava needed to start controlling if they were going to have a shot at winning this game.

Fossett aided in making the knot at halftime by shooting for six, making the 22-point tying shot at 4:18 left in the first half.

A back-and-forth ensued as both Lady Bears squads worked to gain an advantage in the matchup.

In addition to Fossett’s contribution, Araina Evans would toss-in two and Mendel would start getting touches under the bucket for four more points.

As seconds blazed away on the clock, if would be Bewley with six points and the game-tying shot before the break with less than 30 seconds left to spare.

During the half the talk was of a tied game at 30 points for each bench. What the audience did not know was that the end of the second half would end in near-similar fashion as the first.

Ashton Bewley would hit a season-high 24 points in Monday’s game, but not by chance. Bewley was getting the ball when she needed to have it.

“We worked on our motion, on our screen to get her (Bewley) a lot of touches,” said Houk. “She does a good job of coming off the screen and getting the ball and getting to the hoop and scoring for us.”

Lauren Mendel was back in force despite a good match up against Willow Springs’ Shy Figley in the post. After recovering from an injury a few games ago, she was able to reach up for 14 points against the Willow Springs’ defense.

“We worked on, in practice, getting the ball on the inside (to Mendel) like we were earlier in the season,” said Houk.

Back out of the locker room in the third quarter, the Ava squad hit a roadblock in scoring, allowing Willow Springs to pull ahead by 12 points after being outscored 22-10.

Fossett would be held to just two points on fouls given by Willow Springs and Bewley would be cooled to just 2 field goals. Mendel would find herself open for four points, but the total was not what Houk wanted going against a team of Willow Springs’ caliber.

“We didn’t do a very good job of helping and keeping their ball handlers out of the lane,” said Houk. “They got to the free-throw line way too much on us. Offensively we went cold in the third quarter, but then we picked it back up in the fourth quarter.”

Willow Springs did some damage at the free throw line, picking up seven-straight at the stripe in a run of 11 on the Ava Lady Bears.

The Ava Lady Bears came into the fourth quarter with a deficit to make up, and they would come within inches of upsetting Willow Springs.

In the fourth quarter Fossett would tap-in eight and pull an extra point while Lauren Mendel put-up six playing from her spot on the paint.

Unfortunately, foul trouble would come to Eden Little and Hanna Evans who would get benched in the fourth and Ava would give into a double bonus situation with 2:20 left in the game.

“They are a good team, we are trying to be aggressive and keep them from scoring,” said Houk. They had some fouls called on them. When you play that hard, you’re going to create some fouls.”

Down by five with 1:44 left, it seemed that Ava could have been done and ready to hit the road home.

But a late rally with twos from Fossett and Bewley brought the Ava squad within reach of a tie at the end of regulation.

“I wish we’d had a couple more seconds on the clock,” Houk said postgame.

Lauren Hall would find herself with the ball after an Ava timeout with 21.6 seconds left in the game.

As she struggled to get above the defense for a clean shot at the basket, the buzzer sounded to end the match at a narrow 63-61 loss for Ava.

“I thought she was going to get a shot off, it kind of got deflected but she still had a hold of it,” said Mallow. “She was trying to get it to shoot it, but she couldn’t get it in time.”

Losses sometimes come with silver linings. In this case the Ava Lady Bear squad learned something vital to their game and style of play.

“We have kind-of figured-out our tempo,” said coach Nathan Houk. “Their pressure was making us play fast and we realized we don’t want to play as fast as them, we want to slow it down and get the ball inside to Lauren. I think that is where we made a run and closed the gap.”

The Ava Lady Bears did outscore the Willow Springs squad 21-11 in the fourth quarter, a far cry from the hiccup in the third quarter.

In total, Fossett put up 17 points, Bewley marked a season-high of 24, Mendel aided with 14, and Araina Evans and Lauren Hall contributed a combined 6 points. The Ava Lady Bears shot for 58-percent from the charity stripe, sinking 11 of 19 shots given on fouls from Willow Springs while giving up a game-total 18 fouls and 19 points to Willow Springs.

“That third quarter, we kind of stumbled,” said Houk. “I’m proud of our girls, they kept fighting. Willow (Springs) has a really good team. If we can play that well all year, we’ll win games down the stretch.”