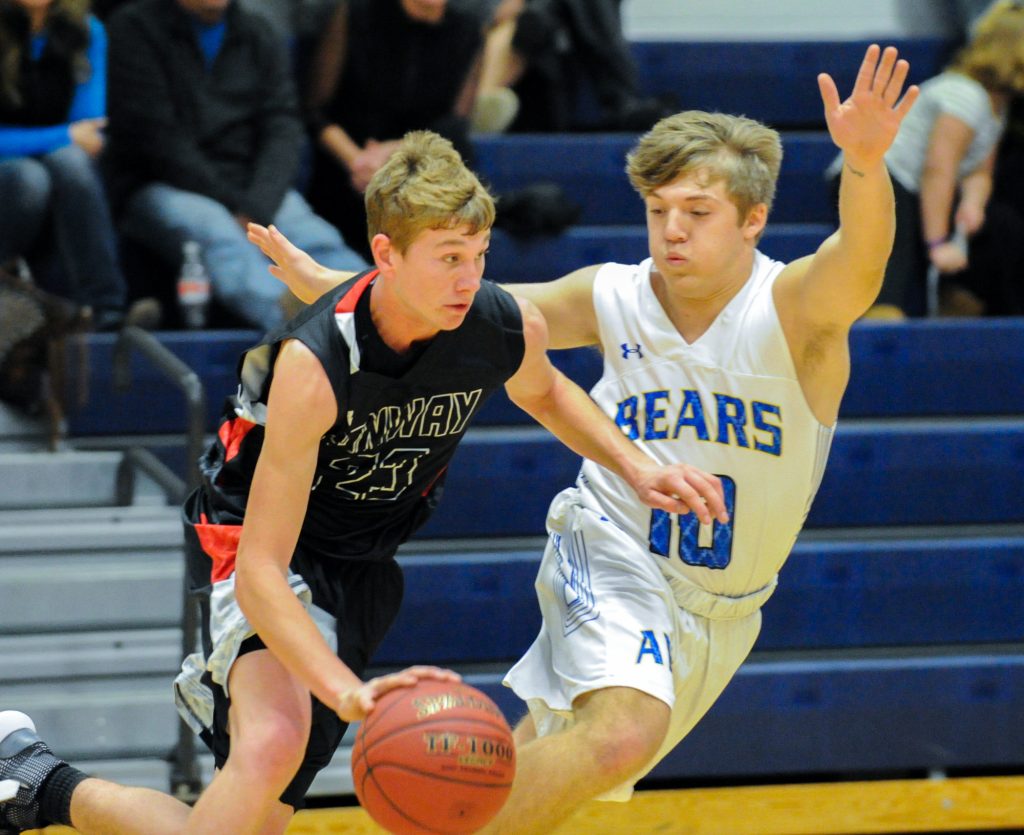 A not-so-familiar face graced the court Tuesday night with the return of Zach Mendel to the Ava bench. The 6’1” sophomore has been out with a shoulder injury since football season.

It will still be some time before he completes a rehabilitation and returns to 100-percent and can play for the Ava Bears. A time line on his full return is still not determined.

“I know that in the future, he is going to be a big part of this program,” said Mike Mallow. “Where he fits-in, in the next 6-7 weeks… we have to wait and see what that looks like and see what his health looks like.”

Ava’s Nate Swofford did not take to the court Tuesday after sustaining an ankle injury during the first quarter against Hollister this past Friday.

Coach Mallow stated that Swofford is still questionable on a return for Friday against Mountain Grove, dependent on how well he recovers in the coming days.

“(He) has improved some,” said Mallow. “He rode the bike yesterday and did some free throw shooting. It’s not like he is not moving around. It comes down to stability because we don’t want to put him out there, have him twist it again. He will be back as soon as he can safely do so.”

Coming off of a tough 61-58 loss in double overtime to Hollister last week, the Bears were eager to change their own luck by improving in making turnovers and applying fierce pressure to the opposing team on both ends of the court.

Andrew Dalton would open the game in what would be a big, 23-point first quarter for the Bears.

A quick trip to the basket followed by an onslaught of shots, including threes from Blayne Mendel and Kaden Bruce, would surge the tally in the Bears’ favor as they closed the first leading 23-10 over Conway.

Dalton, one of the Ava bench’s top scorers, is on-track to making 1,000 career points during his tenure at Ava High School. According to the book kept by the Herald (this does not account for all games played this season), Dalton has at least 186 points to his name and is scoring approximately 20.6 points per game… As a freshman.

Dalton feels that there is a back-and-forth with his teammates that allow Ava to have high-scoring opportunities when all-cylinders are firing on the Ava bench.

“My teammates know how to relocate and get themselves in open spots,” said Dalton. “I feel like when they are driving the lane they are looking for me, so when I drive the lane I’m looking for them.”

The teamwork rings true in the book when points are spread among the Ava players.

When Dalton put up seven in the first quarter, Blayne Mendel and Kaden Bruce also did well, the trio accounting for 20 of the team’s first quarter points.

Even when Dalton was cooled in the second quarter, Blake King and Tom Emerich found scoring opportunities in the midst of a Conway rally.

Conway inched back to trail by five at the break, largely in thanks to a 20-point rally to out-score Ava by 8 points before the break.

Blake King would end a run of ten for the Conway Bears with 1:32 left in the half, but Ava would also give up possession and some intensity with turnovers from fouls given to the Conway bench for a 35-30 score at the halftime buzzer.

“They changed their pressure a little bit and we didn’t do a very good job of attacking it after the change,” said Mallow. “At halftime we were able to tweak a few things and get them to understand what we were trying accomplish, so we were able to attack the press better during the rest of the game.”

After the break and discussion with the young Ava varsity squad, the Bears would come back and rack-up 25 points on the Conway defense with Dalton leading the charge with 18 second half points.

Dalton would also grab a steal and run it to the bucket for two to further the lead for Ava.

“We have to understand that the defensive intensity that created the lead must be maintained throughout the course of the game,” said Mallow during a post-game interview.

With that understanding, Conway was kept to just 12 points in the third quarter and their lead scorer, Colby Varuska, was effectively chilled and silenced to just two points.

Tom Emerich would also play a big role in deflating the Conway spirit after drawing an and-one. Although he missed the free-throw, the call was pivotal for Conway, now on their heels for the rest of the game.

Going into the fourth quarter with a healthy 60-42 lead, the Ava bench rotated players and put the other freshmen on the floor.

Important to note that it was the freshman trio of Dalton, Bruce, and Mendel who accounted for 45 of the 68 points at the final buzzer.

After a 9-point run and big, 25-12 third quarter, the fourth simmered-down to Conway outscoring Ava, 11-8, but it also brought with it important time on the maple for the youngest players who may fill the ranks of the varsity squad next year and need to learn how to apply what is taught in practice, on the court during the game.

“We work daily on our trapping angles and when to rotate and when not to rotate,” said Mallow. “Obviously, it’s always a gamble so on the backside, those guys have to decide whether they are going to protect or intercept. It’s something you have to get a feel for, it’s something we work on daily.”

The Bears will be on the road Friday, Jan. 11, at Mountain Grove with a 5 P.M. start with the all-freshman squad. 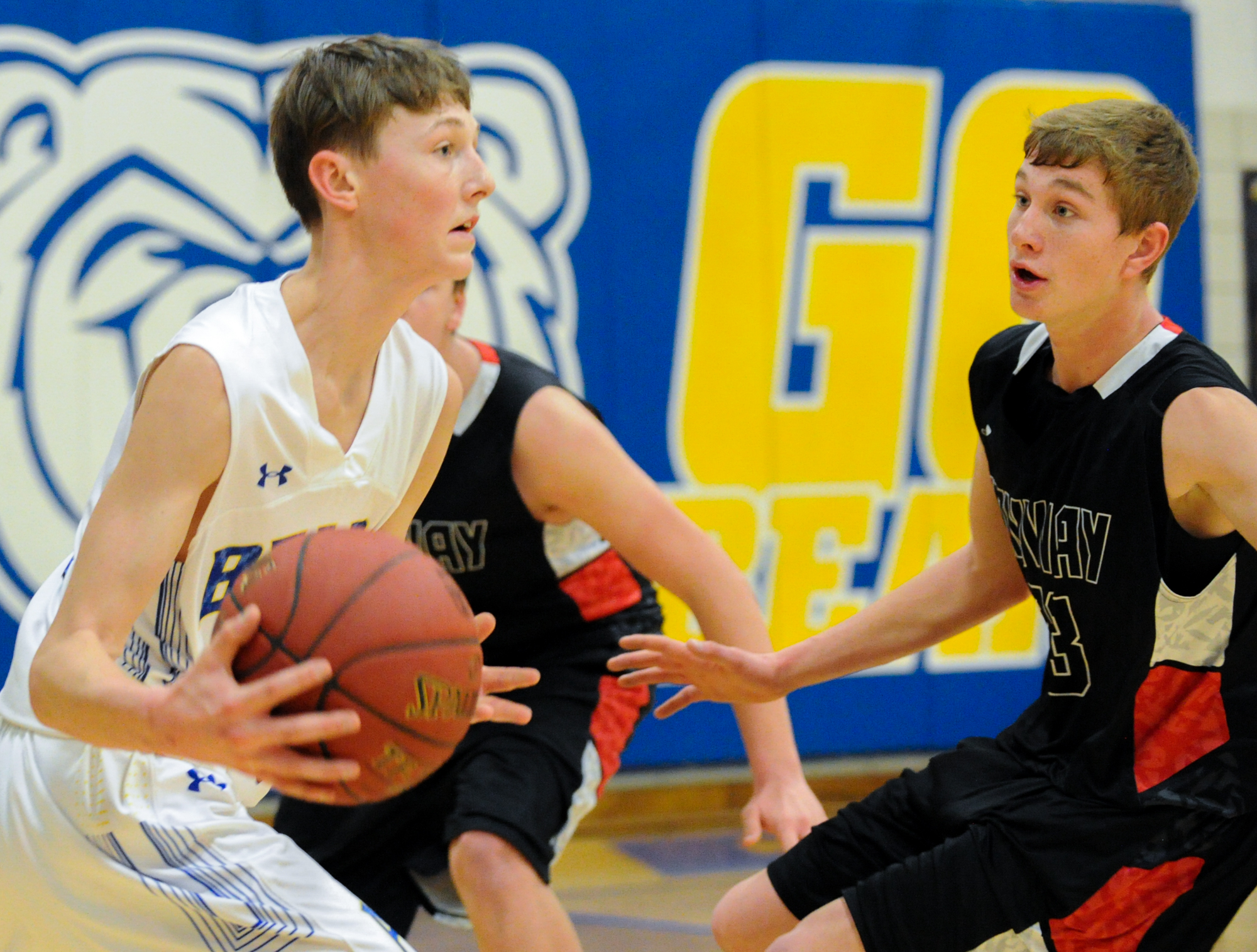