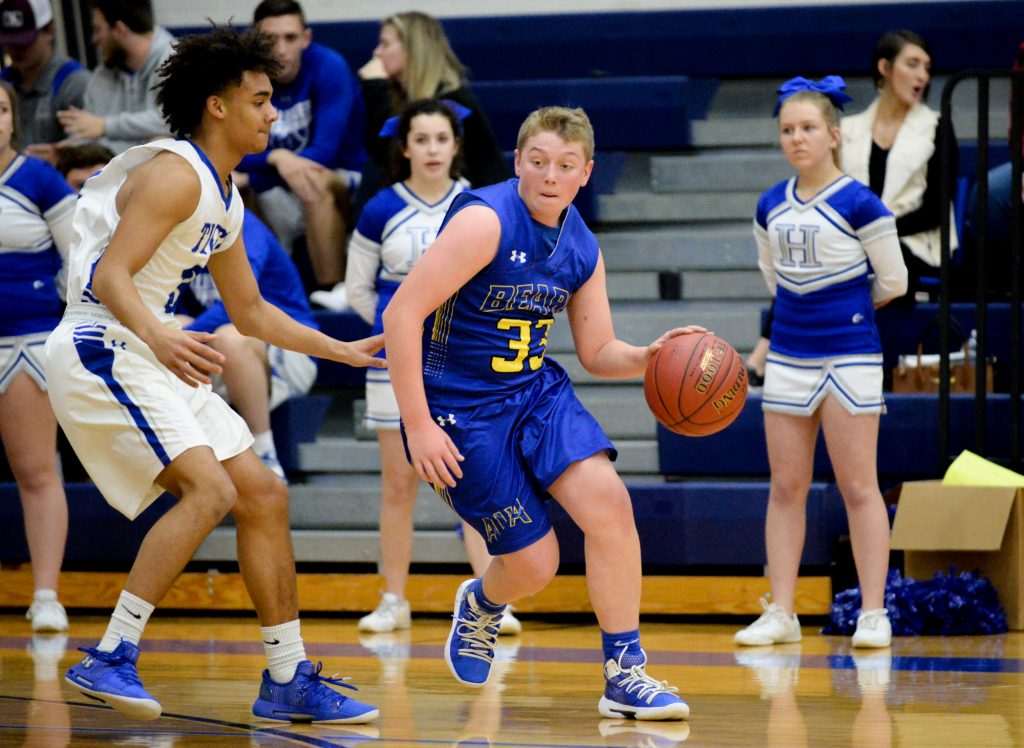 HOLLISTER – Down two from back-to-back losses at the 73rd Annual Blue and Gold Tournament in Springfield, the Ava Bears were hunting for a change of pace and a win to break the two L’s that closed the 2018 half of the season.

The Bears took to the road to open the 2019 half of the basketball season, playing against Hollister High School near Branson, Mo.

Hollister entered the new year at 4-8 according to the scorekeeper at Friday’s game. MSHSAA had not yet updated results from a game in Arkansas and the Blue and Gold Tournament for the Tigers, listing them at 3-3.

Meanwhile, the Ava Bears started the new year 6-4 with half of their season’s losses from the tournament where they dropped two games.

The athleticism and energy in this game would not disappoint those who made the hour-plus drive to Hollister. But it wouldn’t end well, either.

The Bears took command of the game in the first quarter, playing fast and aggressively to put Hollister on their heels and make their coach “feel like” he was “having a heart attack.”

The Bears stacked up two big runs on the Tigers, dashing for 13 in the first and for 8 points in the second.

Blake King, Nate Swofford, and Blayne Mendel each shot one three plus twos from Swofford, Drake King, and Andrew Dalton tallied up for 20 points over Hollister’s 6 in the first quarter.

With 13.5 seconds left in the opening quarter Nate Swofford fell to the paint and reached for his ankle.

Swofford is a pivotal part of the Ava offense, scoring 68 points in the 7 games scored by the Herald.

Averaging near 10 points per game, Swofford had five before his injury forced him to sit out the remainder of the game.

Into the second quarter the Hollister offense made adjustments, outscoring Ava 13-11 as the Bears adjusted with the missing man on the court.

“They just started putting the ball on the floor going to the basket, which is a smart thing to do against our pressure,” said coach Mike Mallow. “They adjusted to our pressure, they get used to the speed or tempo.”

Frustrations led to fouling in Hollister’s favor, the Tigers pulling seven free points in the first half while keeping distance from the whistle.

At the half Ava still maintained a healthy 31-19 lead thanks to their explosive effort in the first quarter where the team was firing on all cylinders.

After the break, things would change as the Bears did their best to hold off the Tiger offense and push through the defense without Swofford. 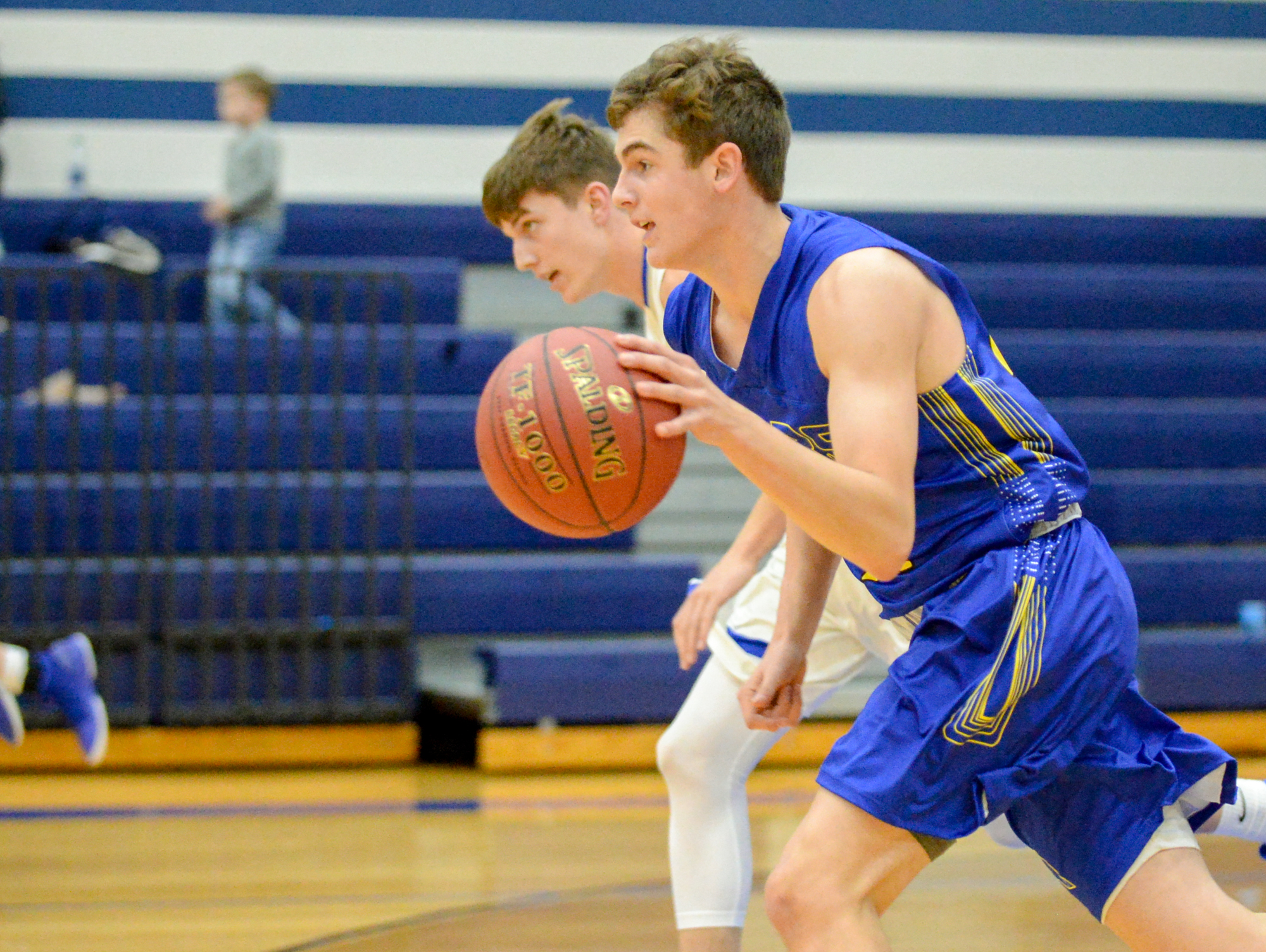 Ava High School’s Andrew Dalton dribbles the ball during a conference game against Hollister on Friday, Jan. 4, 2019, in Hollister, Missouri.

Coach Mallow showed frustration on the change in the Bears’ playing mood. After an aggressive first half the Bears appeared to play on the side of caution, allowing the Hollister Offense to open up and turn the tables on Ava.

Blake King would sink a three and pull one free point in the third quarter while Blayne Mendel lit up the Hollister defense with two threes.

In a polar-opposite of the first quarter, the Tigers would score 20 on Ava’s 13 to narrow the lead to 44-39 at the end of the third.

“I think one of the big keys was Nate getting hurt,” said Mallow. “It’s really hard to play our style of play with seven guys. You need eight, better off with nine, but you need at least eight. I thought that was the probably the biggest thing. You get a little tired, your feet slow down and you start fouling.”

Logan Armitage, Cole Jones, and Carter Krysl would do their damage for a combined 16 points. Krysl would be the Tigers’ lead scorer with 22 on the Ava defense.

The scoring trend would continue against the Bears as the Tigers kept up the pressure for another nine points over Ava’s four in the fourth.

Ava would find themselves in giving up a bonus situation for the Tigers at 5:07, followed by a questionable double foul in which the possession was given to Hollister instead of using the alternating possession rule.

The call wouldn’t be the last in an end-game of questionable calls and actions by the officiating duo.

Blake King would catch a break after being fouled on an attempt at three. He would make two to tie the game at 47 with just over three minutes left.

The Bears would get another break when Hollister’s Carter Krysl fouled-out and was benched with 2:39 left.

Mendel would miss a 2-footer at the two-minute mark, Ava leading by one. With the clock so close to going blank, the Bears offense would go to their endgame and hold on to their possession.

Blake King would drive the lane for final two but was called for an offensive foul against Logan Armitage with just 49.1 left in regulation.

At the charity stripe, Armitage would miss the first of two throws.

The second would sink-in to knot the game at 48 as the buzzer later ushered in overtime.

Andrew Dalton would miss a 4-footer and then Drake King would foul-out after chipping-in two with 2 minutes left in OT.

Hollister’s Cole Jones then fouled Dalton who would make one of the two throws from the stripe to make it 51 points for Ava.

It seemed that Ava had come out on top in overtime.

Then, seemingly out of nowhere, Tigers’ Presley David would come alive after scoring only five in regulation.

From beyond the arc was a tying three. The Hollister fan base exploded as the game went into a second OT period with the score at 51 both ways.

“You’ve got to have fresh legs to make threes and fresh legs to create turnovers,” said Mallow. “I think we got a little worn. There are some guys on the bench I needed to put in there. I needed guards more than I needed posts.”

A total of 14 shots would be made from the stripe by both teams thanks to numerous called touch-fouls and double-bonus situations for both teams.

The Ava bench would take 5 points from Hollister fouls. However, Hollister’s Presley David put on a performance with five points in second overtime to lead the Tigers ahead by six.

Blake King would sink a three with just a few seconds left as Coach Mallow shouted for a timeout which appeared to be ignored as officials literally ran out of the gym at the buzzer.

Overall, the Bears delivered 11 field goals, eight threes, and shot 64 -percent for nine points at the charity stripe. A big lesson would also be learned as the young crew continues to grow and learn from their experiences.

“I told them this will happen again, concluded Mallow. “We will be on the road up two, down two, tied… whatever. Clock running down, you just can’t simulate that kind of pressure in practice. I think we’re all disappointed, but you have to look at it as an opportunity to learn, and opportunity to keep digging and keep moving forward.”

The junior varsity squad also lost to the Hollister Tigers on Jan. 4, trailing 62-33.

The JV Bears put up just 5 points in the first quarter with a two from Zach Olsen and a three from Dylan King.

The JV squad opened up more in the second quarter, scoring 13 points and closing the half behind, 35-18.

Olsen put up eight points aided by five more from Jacob Gillies. The JV Bears kept fouls to a minimum, giving up only 5 in the first half.

After the break the JV squad was held to just two points from a bucket by Olsen while the JV Tigers pulled ahead 49-20.

The fourth quarter brought another 13 points by the JV Bears but were not enough to break the deficit.

Anthony Walsh would shoot two from beyond the arc for 6 points, backed by Payton Evans with four and Konner Nelson with a three.

At the end of regulation, the JV squad would be handed a 62-33 loss by the JV Tigers.