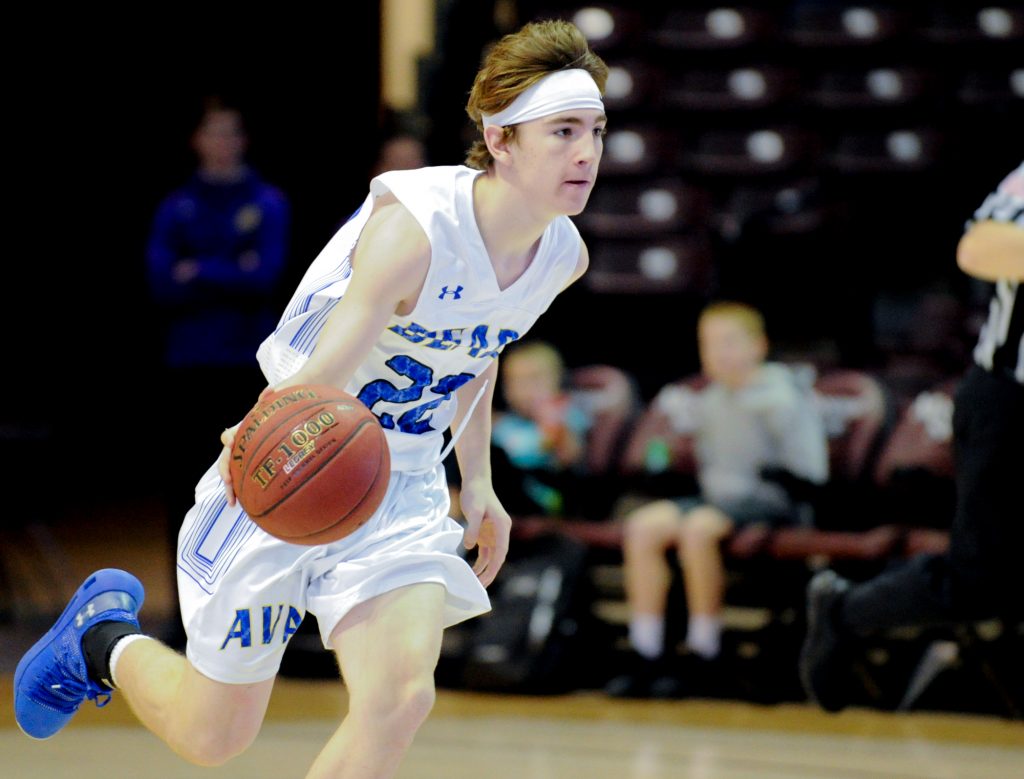 SPRINGFIELD – The Ava Bears hit the road right after Christmas Day with a big hiccup and break in the team’s winning streak.

The Bears were on-a-roll with a 4W streak after reclaiming victory over the Seymour Tigers on Dec. 20. The Bears held on to a 10-point margin at the buzzer, topping Seymour High School 74-64.

It was a big break for the Bears, who have struggled with consistency as young players mature quickly on the court. They have celebrated pivotal wins over teams like Forsyth as they entered the 73rd Annual Blue and Gold Tournament with a 6-2 and four-straight wins to their name.

As luck would have it, they were seeded in the tournament against the Springfield Catholic Irish on Wednesday, Dec. 26, staring down the private school’s perfect 10-0 record.

As fate would decide, both schools are assigned to the Missouri State High School Athletic Association’s Class 3, District 11 competition group and will eventually be in the same MSHSAA district tournament come mid-February.

The day after Christmas and all through the JQH Arena were bright lights and the feel of collegiate basketball. The reigning Gold Division champs came and played to keep their record untarnished. 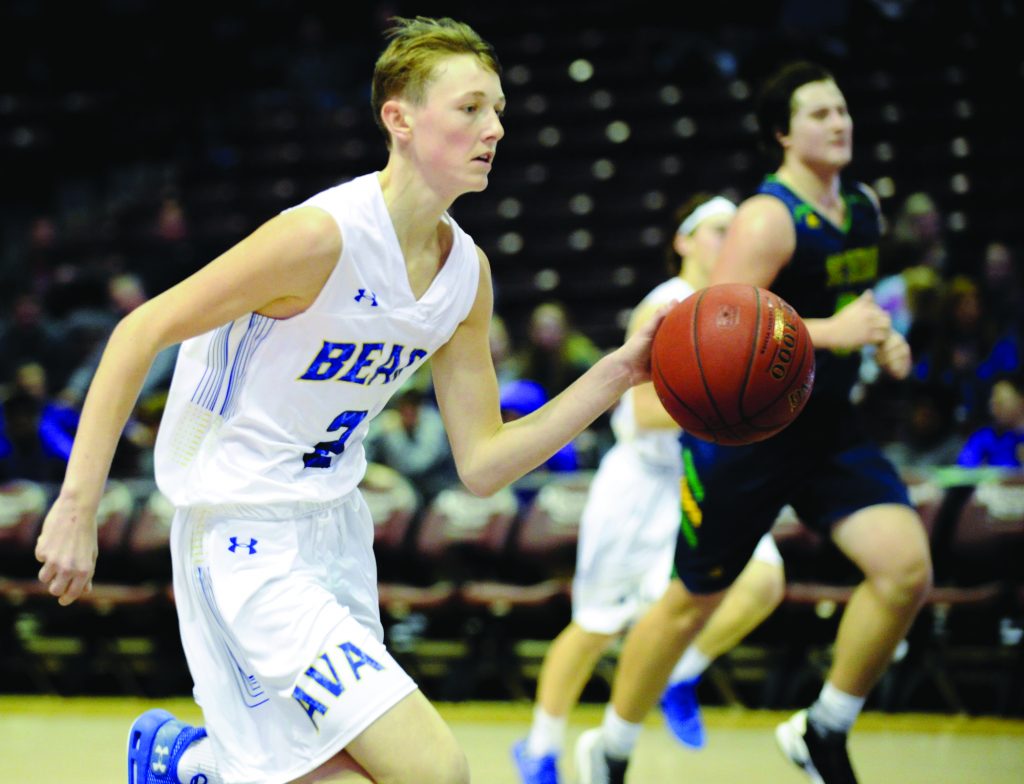 Ava High School’s Blake King (2) moves the ball down court during the Bears’ opening session against Springfield Catholic at the 73rd Annual Blue and Gold Tournament on Wednesday, Dec. 26, 2018, at the JQH Arena in Springfield, Missouri. (Jason Hoekema/Douglas County Herald)

Springfield Catholic would open up with a 6-point run on the Bears. Blake King, Nate Swofford, Kaden Bruce, Drake King, and Andrew Dalton would all put up one bucket each for 10 against the Irish’s 20 points in the first.

One Ava fan described it as a David vs. Goliath seeding at the tournament, but with no stones to throw this match’s conclusion became apparent.

Irish’s Jake Branham made-off with six points from two long-balls in the first. After adjustments, the private school pulled more tricks from their sleeves as they outran and out-shot the Bears who struggled on both ends of the court. 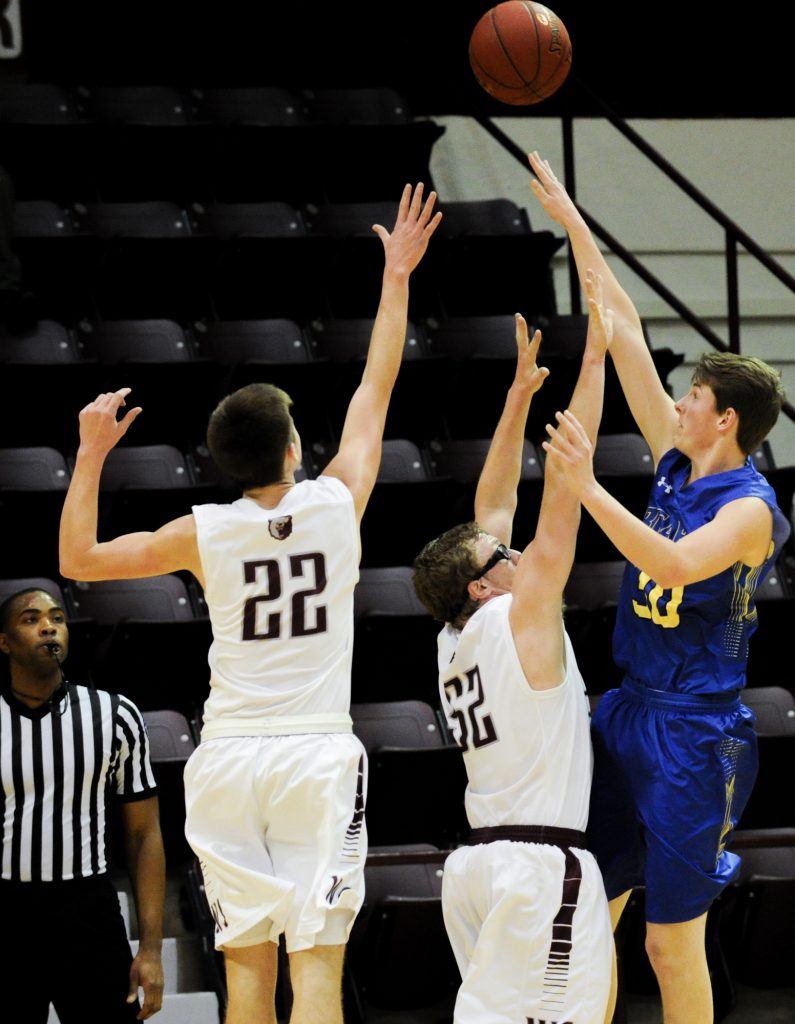 Blake King would answer with one shot from the arc in the second quarter, aided by two buckets by Andrew Dalton and one more from Drake King for just 9 points to add-on before the 39-19 halftime break.

Despite the Bears’ attempts to open up pressure on the Irish defense, they continued to be behind the play break for the rest of the game.

Springfield Catholic would turn it up a notch in the third quarter with 26 points to Ava’s 12. Jake Branham was as good of a utility player as could be, making twos and shooting threes every half-chance the Bears gave him for 23 personal game-total points.

And-1’s on several of the seven team fouls by the bears in the second half would add seven points for the Irish, who shot 79-percent from the charity stripe.

Ava wouldn’t recover those points, getting just one freebie by Dalton, the team shooting a collective 33% at the free-throw line.

The fourth quarter cooled on both sides of the bench as the Irish rotated players to the court. Even with the rotation, Ava would only answer 3 of the Irish 6 points in the fourth.

For the first time this season, Caleb Johnson fouled-out of competition. According to games covered by the in-person by the Herald, the only other Bears to get five whistles against them this year have been Tom Emerich and Drake King during a frustrating 97-80 loss to Mansfield on Nov. 30.

As the horn bellowed its game-ending sound, the Bears would foul Jeremy Raber on an attempted three, giving the Irish two salty points after regulation for a final score of 71-34 for Springfield Catholic.

Thursday, Dec. 27, the Bears moved to the left on the Gold Division bracket. Paired with Willow Springs High, who lost 61-39 against Bolivar on Dec. 26, it would be another frustrating game for the Ava Bears.

In a bit of a preview to a game scheduled for Jan. 29, the Ava and Willow Springs Bears tipped-off at 5 P.M. in the Hammons Student Center at the Missouri State campus.

Out-scored thanks to a sluggish and uncharacteristic start by the Ava Bears, Willow Springs would open the game with a 20-15 lead in the first quarter. A five-point deficit isn’t normally something to scare the Ava bench, but whistles came time and again against the Bears.

“We didn’t make many threes, that is something we normally do,” said coach Mike Mallow. “We normally shoot the ball very well. Last couple of days we haven’t, I expect that to come back. We’ll shoot the ball a little better down the road.”

Two fouls drawn on the shot by Willow Springs’ Carson Lowe and Scottie Osborn would begin the trail of single-point dots in the score book.

Meanwhile, Owen Duddridge would show early for two threes and a bucket for 8 points followed by Ryan Cawvey with six. Both players would be cooled by the Ava defense but were destined to become a thorn in the Bears’ paw.

The Ava bench saw another sluggish second quarter, scoring only 9 to Willow Springs 16 points before the halftime horn.

Foul trouble found the Ava Bears early in the match and would put strain on the coaches and players as multiple starters were benched in the first half.

“Keep in mind, that first half we were in foul-trouble, so we had 3 or 4 starters on the bench most of the first half,” said coach Mike Mallow.

During the break, Ava looked at the game plan and how to get a Andrew Dalton touches and buckets for the Bears.

From the sidelines, Mallow would yell “44,” possibly indicating it was time to get Dalton the ball while on the paint.

“I think we have to give them some credit, said Mallow. “I think their defense is pretty good, they doubled Dalton a lot when they threw it inside.”

Dalton would put up only 10 points in the second half for an unusually low, 17 game-total points.

“We played okay, we just didn’t shoot the ball well, said Mallow. “When you play someone, who plays really good defense, sometimes you have got to be a little more patient.”

Individual nails would seal the coffin for Ava through the end of the game with Willow Springs shooting 74-percent from the charity stripe for a total of 25 free points in the game.

Working against the whistle, Ava was able to chisel away at a 15-point deficit in the third quarter, coming as close as 3 points away from the lead with 26.8 seconds left in the fourth quarter.

“I didn’t think (the officiating) was very consistent. They’re like players and coaches and are doing the best they can, said Mallow. “Sometimes they are really on top of it and sometimes they don’t have the best game. Same way with our players, same way with me as a coach.”

Taking two 60-second timeouts in the last minute of the game, Mallow was looking for a way to come up with a win and a ticket to continue competing in the tournament.

Unfortunately, Blayne Mendel would get the whistle on a touch-foul given to Willow Springs’ Cawvey for the final two free points.

The horn blared, and Ava had to go home with a 60-55 loss to end their bid in the Annual Blue and Gold Tournament.

There is a silver lining to the losses taken by the Ava Bears over the Christmas break. Like Seymour, Willow Springs has shown their hand.

Should Mallow and the Bears prepare adequately and give up fewer two-shot fouls, it is conceivable that the Bears can redeem themselves when they face Willow Springs on Jan. 29.

As for dealing with Springfield Catholic in the Class 3 District 11 playoffs in February, Mallow is waiting to cross that bridge when the time comes.

“Honestly there is so much basketball between here and there, we just have to continue to improve, said Mallow. “We have to work toward the goal of improvement, and we’ll figure that out when we get there.”

Ava Basketball resumes regular season play with the girls squads playing in Mansfield on Thursday, Jan. 3, followed by the boys squads headed out to Hollister on Friday, Jan. 4. 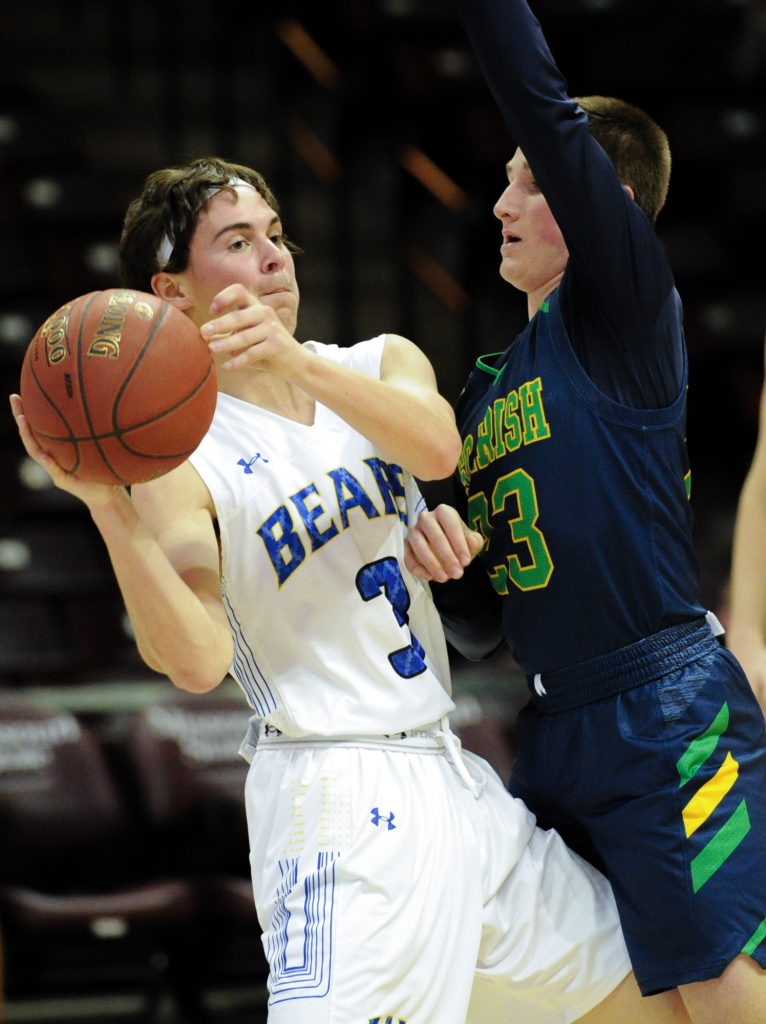 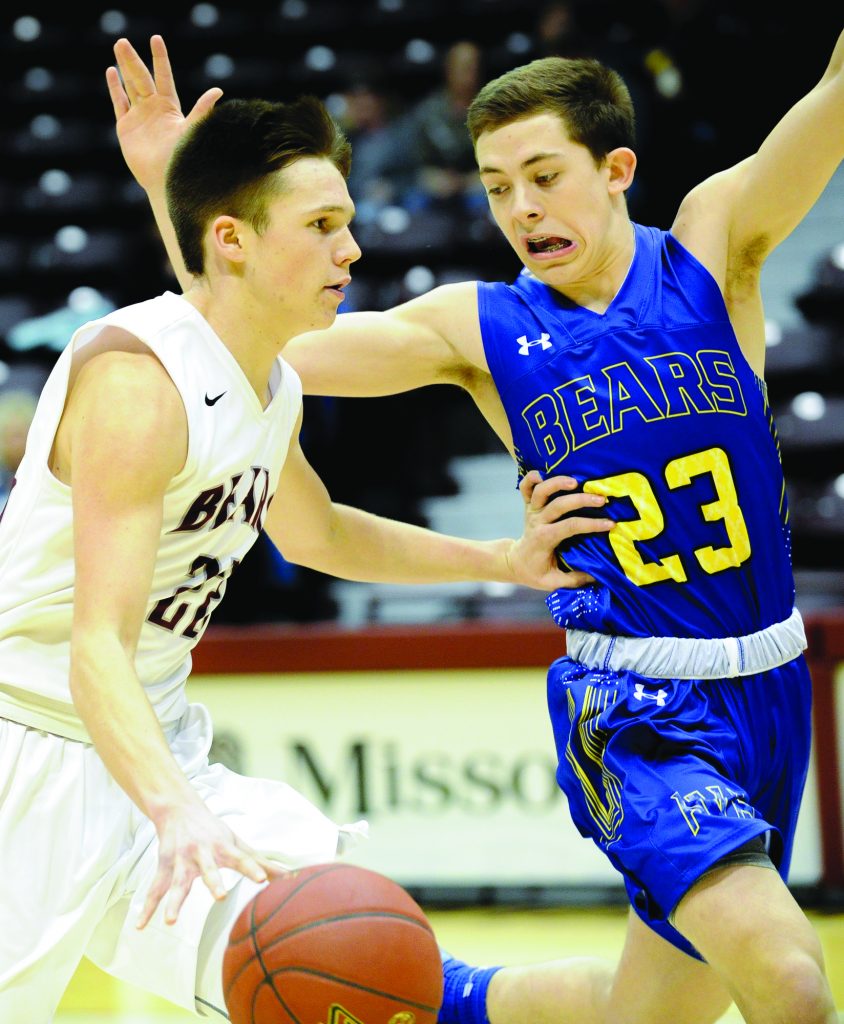 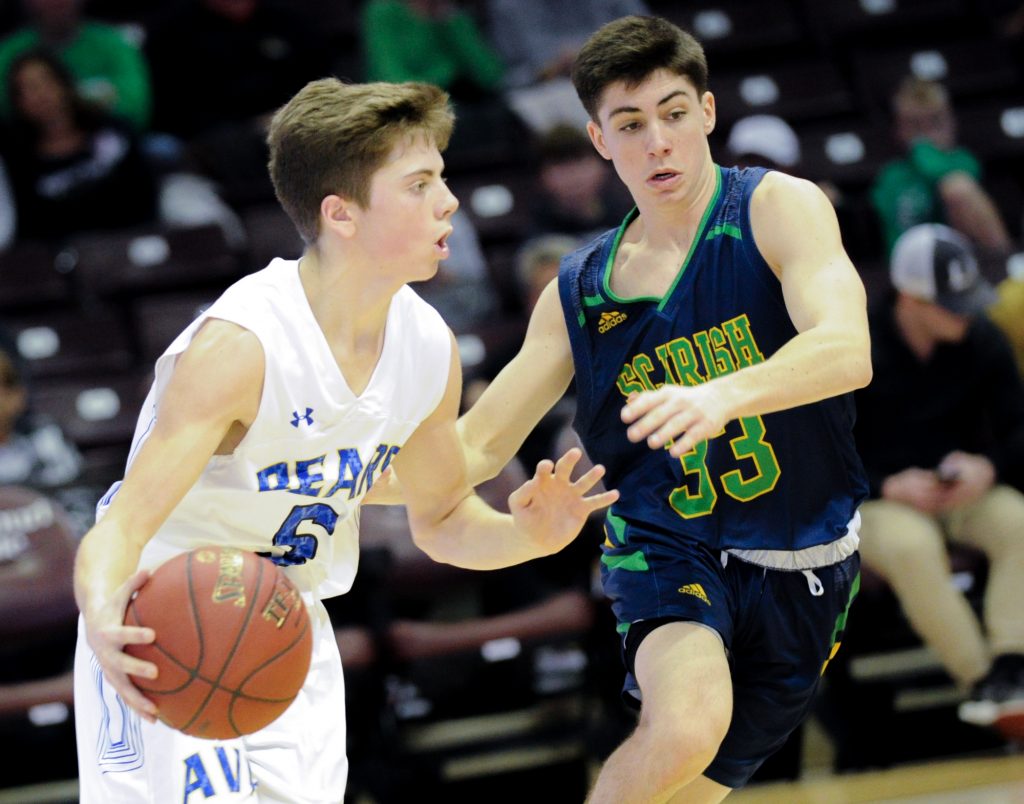 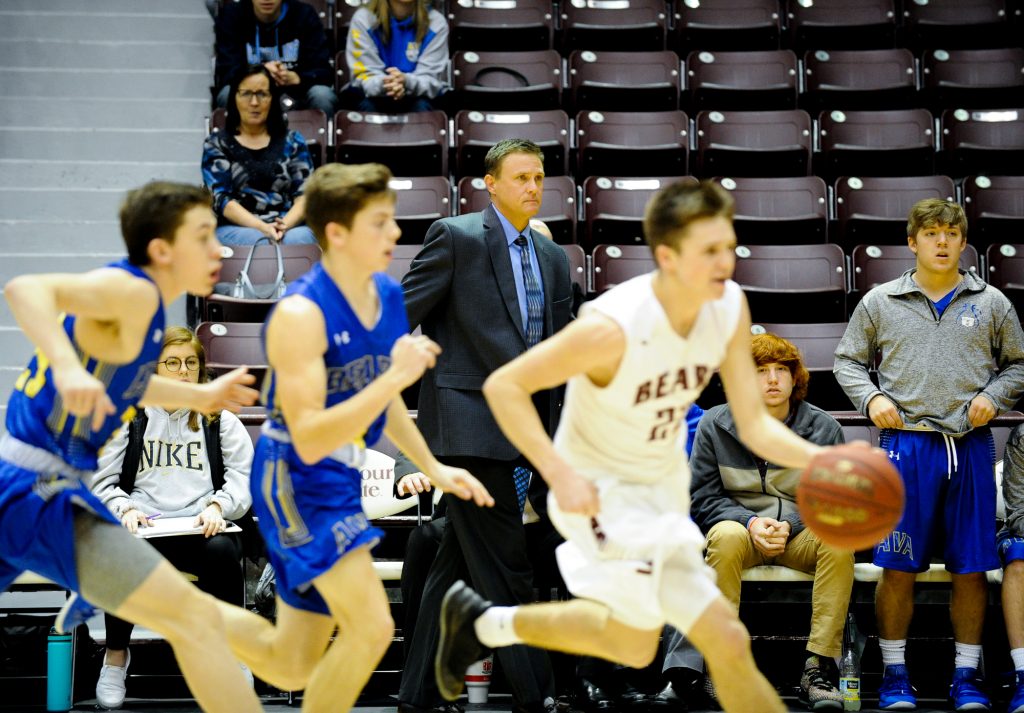