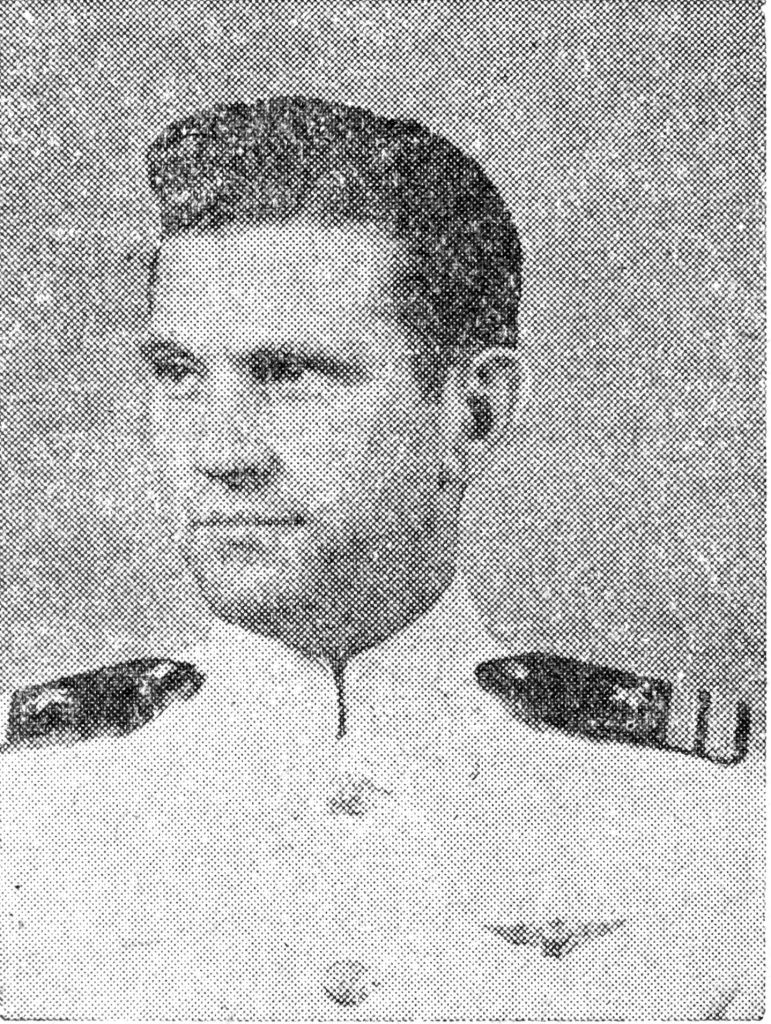 Now on his second mission to the South Pacific war zone, Lieutenant Commander William I. Martin, son of Mr. and Mrs. Harry Martin of Ava, is the subject of a feature story in the November issue of “Skyways,” a national magazine published in New York and devoted largely to the exploits of aviation. Title of the story is “Hell-Diving Is Heaven,” by Victor Boesen. 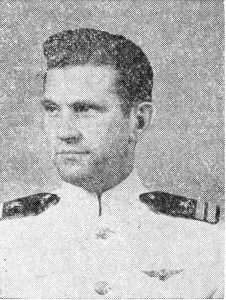 Lieutenant Commander W. (Billy) Martin, holder of the Distinguished Flying Cross, is pictured here in uniform of a Navy lieutenant, a picture made before his promotion to lieutenant commander.

“Lieutenant Commander Martin, an alumnus of Annapolis and the University of Missouri, and holder of the Distinguished Flying Cross for a job described as a ‘major contribution to the enemy’s defeat in one of the South Pacific battles,’ was quiet but firm in refusing to talk about himself,” write Boesen. “In the first place,” he explained, “you never know when the things you say might be regarded as restricted, confidential, or even secret; and anyway, ‘I’m poor copy.’”

Describing Martin’s first mission into the South Pacific, we quote:

“It was four o’clock in the afternoon. A moderate haze lay over the sea, and a light wind roughed up the water as the hell-divers took off after a covey of enemy ships reported by the carrier’s scouts…

“…the battle had already begun when Martin and his squadron arrived. The Japs were up to running some troops and supplies into Guadalcanal and were swatting at their attackers like a man beset by bees.

“Quickly deploying his lads for the business at hand, Martin picked out – fat troop ship and pushover for the plunge…Through his telescope as he plummeted downward he could see that the ship was maggoty with Japs. He estimated the number at five to eight thousand, far more for the space than is the practice on our side.

“That in a few seconds a goodly number of this gentry would be blown to many little pieces was no part of Martin’s thoughts. At such moments there is neither time nor room for pondering the humanities. There may be enemy planes coming in on you from above, but you don’t think about that either. That is a matter for your gunner, behind you and riding backward, to look out for…but there were no Zeros to bedevil them, bullets and shells coming up from the still unwounded ship below were like a hailstorm in reverse.

“Martin couldn’t help seeing the whitish flashes stabbing up from the bigger guns – they were spitting right into his face – but he was too preoccupied to wonder where the missiles were going. You don’t pay any attention to that until you are hit, and then there is usually little point in it. Martin felt a jar as they neared the target, like hitting a bump in the road, but he didn’t know what had happened.

“A shell had burst near the wing, and it did what shells intended to do, only not quite enough of it… The dive continued down the groove.

“Right over the vessel, Martin let go his bombs and pulled out. He gave a quick glance over his shoulder and saw it hit, but got too busy with evasive action to notice details. That also fell to Sugar (his gunner), who facing backward, could see everything as he squirted bullets into the mess.

“The bomb hit and exploded against the bridge. Wreckage and Japs took off toward all points of the compass. It was the kind of a hit that is to the hell-divers’ soul what a steak is to a civilian stomach.

“When the dive is over, the pilot is on his own to meet conditions as they develop. He looks out for himself but at the same time keeps within the rules to coordinate defense…He sees for instance, that no diver is left to himself. A Zero will attack a lone SBD, and stand a good chance of success, but no Zero, or even two or three, dares take on a pair of dive-bombers.

“As soon as possible, the attackers rendezvous, form up defensively, and get away. The gasoline will be getting low by now. Back on the carrier, everyone is anxious to refuel and shuttle out with another bomb. Those who connected the first time, want to make it two and those who missed are hell-bent to try again…”