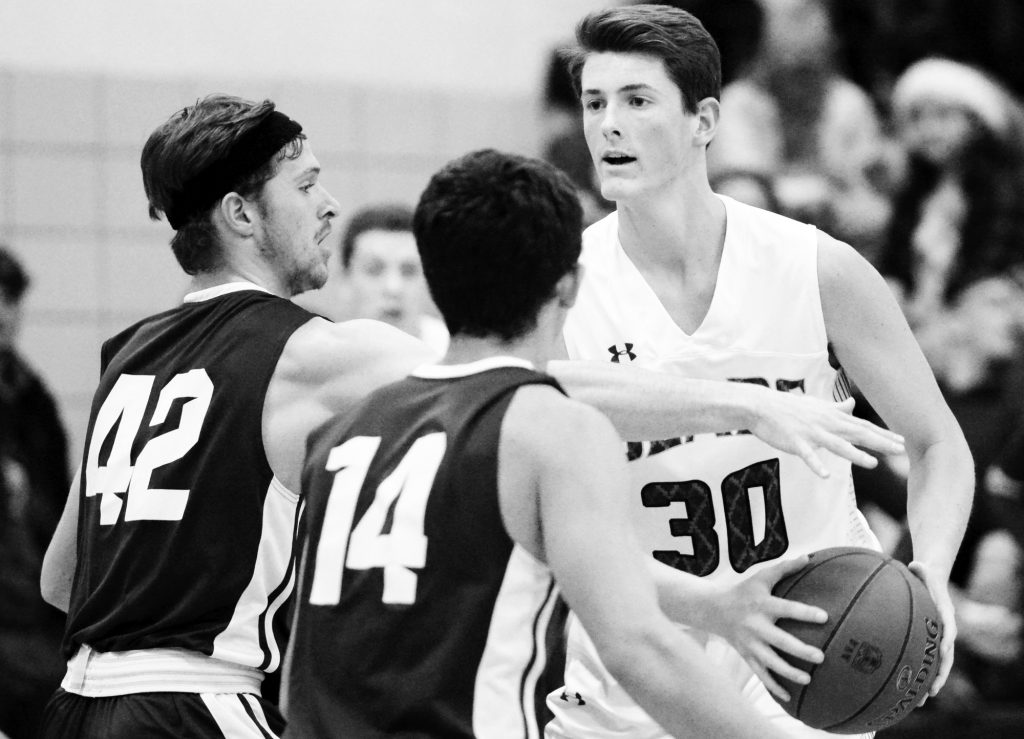 Ava High School senior Drake King (30) keeps the ball out of reach for the Seymour defense while looking for a play development during a non-conference game against Seymour on Thursday, Dec. 20, in Ava, Missouri.

The Ava High School boys varsity squad played in familiar waters Thurs., Dec. 20, as they hosted the Seymour Tigers on the maple at home.

Last week the Bears faced a tough opponent in Forsyth where they came out with a 79-77 victory over the Panthers.

It was a hard-fought victory with end-game similarities that can make an avid Ava fan shiver.

The Bears led Forsyth 56-43 at the end of the third quarter on Dec. 14. A lead that would dwindle down to just two points to decide the game.

Last time Ava faced Seymour in the Mansfield Tournament they were handed an 88-79 loss by the Tigers. Thursday’s game brought a sense of redemption to the Ava bench after out-playing the Tigers in their second match up of the season.

“I think we played better defensively.” said coach Mike Mallow. “They got a lot of straight-line drives right to the basket against our pressure last time. So, we’re working on trying to protect the basket, still double-teaming, still trapping the ball, still pressure but gave up fewer layups. I think that showed tonight, we tried to take some charges and force them to earn a few more buckets.”

Ava started the game leading the Tigers 14-11 out of the first quarter. Andrew Dalton would put-up three twos backed by threes from Blake King and sharp-shooter Caleb Johnson.

Seymour players quickly found themselves in foul trouble early into the game with three of their players on the cusp of getting benched in the second half.

“We came out trying to throw the ball inside, we thought we could hurt them inside, thought we could get them into foul trouble,” said Mallow. “That happened early and we always try to push the ball up and down, shoot it when we’re open.”

Fouls for Ava went to the boundary for the most part, the Bears  only pulling two points from the charity stripe in the first half.

Dalton would put in the work for another 7 points as gears turned in unison for the Bears with threes from Drake King, Johnson and Tom Emerich in the second quarter.

A passing mistake and turnover would cut the Bears’ tempo short before the teams went into the locker rooms.

Things appeared to be working out for the Bears despite some frustrations over play execution by coach Mike Mallow, who hounded the squad for missing key player positioning and rebound mistakes costing them turnovers and creating opportunities for Tiger ace Eric Helms to take advantage of.

“Here is the deal, early in the game we didn’t rebound,” said Mallow. “You can’t run down there and shoot it if you don’t get it. The first play for the offensive possession is the rebound. Early, I called a time out and I was pretty upset with them because we weren’t rebounding. Then once we got some stops, rebounding the ball, we were able to get our fast break.”

The Bears sat comfortably over Seymour, 39-27, at the half once Mallow addressed the issue during a timeout in the middle of the second quarter.

Tiger ace Eric Helms would celebrate his 1,000th point – 1,003 at the game’s end – making costly buckets. In perspective, he was cooled this game by the Bear defense.

“He is a really good player, the last shot he spun into a double team we had four hands straight up in the air and he knocked it in,” said Mallow. “There are times you just have to give guys credit, guys who can create shots and make shots are really hard to guard. He got (29), which is a lot, but he had 43 the last time. We did a lot better job on him this time. He had to earn them.”

Helms shot for 13 in the first half, aided only by Brian Pearce  who shot from outside twice, earning 8 first half points. He would put up a total of 29 against the Bears through four quarters.

The Bears would face the challenge by keeping pace with the Tigers’ scoring for the rest of the game.

A 13-point lead dwindled down to just six during a rally from Seymour in the second half after the tigers were able to hit the rim from the arc six times after the break.

The Bears saw a similar opponent rally by Forsyth the week before. Twos from Dalton, Drake King, Johnson, Swofford and Emerich would help tally 19 for the Bears in the third.

It was a giant momentum surge stemming from a three off of the left wing by Blake King, just beating the third quarter buzzer, that would really ramp-up the energy for the game’s conclusion.

“It fired up the whole building, I think. The place kind of erupted,” said Mallow.  “He had one more from the right wing that panned out which would have had the same effect, we were getting close to putting the nail in the coffin there for a minute, but then they kind of creeped back up on us.”

Off the bench and on the court, both teams ran into foul trouble late in the game resulting in bonus situations and several trips to the charity stripe.

The Tigers would shoot 9 of 13 thanks to fouls drawn from the Bears, two on a controversial charging call made by the officials.

Meanwhile the Bears kept up the pace, drawing fouls for 7 points in the second half.

Swofford found the rim with four points plus another four from the stripe while the whistle leaned toward the Tigers in the final minutes.

Despite trailing 19-16 in fourth quarter scoring, the Bears were too much for the Tigers as the clock  blanked-out with Dalton holding on to the final rebound for a 74-64 victory for Ava.

“They made shots and got a few breaks in that stretch,” said Mallow. “Once we got settled down we were fine, but we had to get (the players) calmed down a bit.”

Overall, Dalton led in scoring with 17 points. Followed by Swofford with 15 and Blake King with 3 threes for the night for a total of 12 thanks in-part to the energy and noise in the Ava gym.

“Our fans are great. We had a bunch of people here tonight and they were loud and enthusiastic and supported our kids,” said Mallow. “The kids appreciate that and the coaching staff appreciates that as well.”

The Bears moved forward to the “Blue and Gold Tournament, opening against Springfield Cathloic on Dec. 26 at 11 A.M.