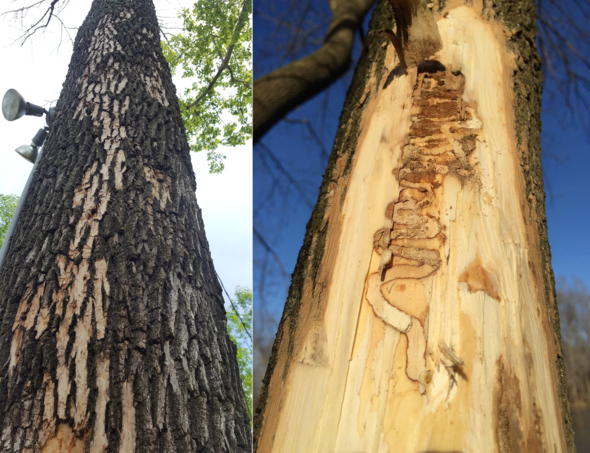 In winter, watch for bark blonding on ash trees caused by foraging woodpeckers (left). This can be an indication that Emerald Ash Borer (EAB) is present. ‘S’-shaped galleries revealed underneath confirm the presence of EAB (right). If you find ash trees with bark blonding, MDC encourages you to report the tree’s location using the online form at eab.missouri.edu.

Tree-killing pest has now spread to 59 Missouri counties. Nearby, Webster and Wright counties are now on the list.

COLUMBIA, Mo. – Foresters with the Missouri Department of Conservation (MDC) have confirmed the presence of Emerald Ash Borer (EAB) in six new counties across Missouri. New detections have been confirmed in Caldwell, Gasconade, Harrison, Hickory, Webster, and Wright counties. Since EAB was first detected in Missouri in July 2008, the exotic, tree-killing pest has spread to a total of 59 Missouri counties and the City of St. Louis.

EAB is a small, metallic green beetle native to Asia that attacks all species of ash trees, including the commonly planted green ash and white ash.  At approximately a half-inch long, the green adult beetle feeds on leaves and does very little damage to trees. However, in its larval stage, the insect kills ash trees by feeding on the water- and nutrient-conducting tissues just under the bark.

MDC Forest Entomologist Robbie Doerhoff suspects that EAB is present in several other counties besides those on the most recent map of confirmations.

“After EAB arrives in a new location, it can take at least five years for the population to build to the point where we can detect it using specialized insect traps,” said Doerhoff. “We really rely on public reports to help us find new EAB locations, particularly in the winter months.”

You can help MDC track the spread of this invasive pest by keeping an eye out for bark blonding on ash trees. Bark blonding is caused by woodpeckers removing a tree’s outer bark while searching for insect larvae. On ash trees, this feeding activity reveals a white inner bark that is highly noticeable.

“Ash trees with bark blonding may not have EAB, but it is certainly worth reporting these trees for a closer look by MDC foresters,” added Doerhoff.

MDC encourages Missourians to report possible EAB infestations in counties where the pest has not yet been confirmed. Reports can be made by using the online form at eab.missouri.edu or by calling MDC’s Forest Pest Hotline at 866-716-9974. You can help slow the spread of EAB and other invasive forest pests by using locally harvested firewood. Buy firewood near where you plan to burn it! 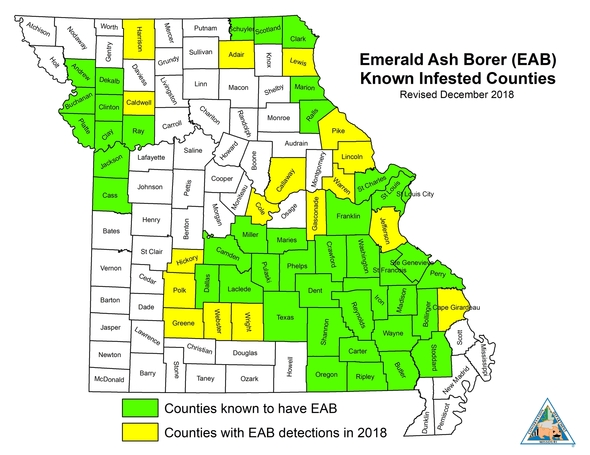