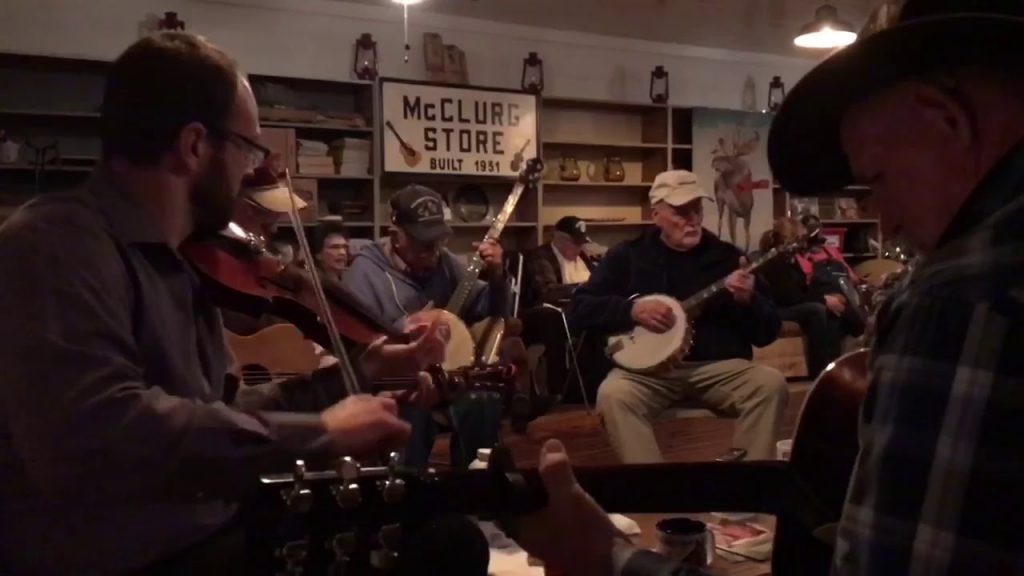 What started with a couple of fiddlers, a game warden, and a deer camp has been going on practically every Monday for the last 35 years.

Tucked deep in the heart of the Ozarks is a family den where folks come to swap stories, talk about the weather, sit for a spell and fiddle around.

In the woods along Highway W, about four miles south of Highway 76 sits the McClurg General Store and post office.

It was built in 1951 by Lester and Ailene Adams. Lester was the postman back then, working out of a now-preserved corner of the store once reserved for mail operations.

Remaining are the worn  wooden floors, the chimney, and the feel of down-home country culture. Something a special group of individuals are trying to keep alive.

Tables, shelves, photos, chairs, stories, music, and memories all merge into a singular moment of time that is neither past nor present.

The story has tweaks as unique as the individual telling it.

Yet one fact is certain. Around 1983 (Alvie will jokingly tell you, “give-or-take ten years,” if you ask him) a fire at a deer camp was a hunter’s home for the night.

According to some, the game warden was checking camps and heard music coming from one near what is now the junction of Hwy. W and jumped in with his fiddle.

From there the musical posse moved indoors, playing at the house across the street from the store.

Lester passed away and Ailene remarried after she was kept from becoming postmaster and decided to shut down the store. She married a man named Lonnie Taber, who passed just months ago.

The fiddle jam moved into the former general store, where the community has gathered for years.

Lonnie, referred to as one of the “rocks” of the group, sold the store to a couple from Wisconsin before he died. He also made sure the gathering kept the music going, making that part of the conditions of the sale.

Her husband, Dilber, fathered David, who sat next to the door in the circle of musicians as they ate their home-cooked dinner and tuned their instruments.

The dedication of the famly-of-friends is tough to beat, even for mother nature.

“Even in the bitter weather, they come out,” said Sutherland.

A shout came from a woman sitting at the table.

Alvie Dooms smiles after playing a number on the guitar during an old-time jam Monday, December 3, 2018, at the McClurg General Store near Ava, Missouri.

“The Deckers are here!”

Mona and Max had just walked through the door, greeted by their Monday-night family.

Ailene and her growing “family” didn’t always meet under pleasant circumstances, though.

She lost a son to a construction accident one year, but when posed with the question of canceling the gathering the following Monday, the story says she said “no.”

She told those who came to pay respects that they were her family, and that she needed them there to carry on what has been alive for 35 years today.

Alvie Dooms is a tough man to miss. With a deep voice and the character to match, he plays the guitar in the group.

His father was said to have come from Kentucky carrying a fiddle. He himself learning to play the part in his father’s footsteps.

Now he strums a six-string, having no say in the creation of his love for the music.

“(I) collected fiddles, repaired them, worked on them,” Alvie said humbly. “Was never really good playing them.”

Alvie says he continues to always bring a fiddle in case nobody shows, or a fiddler needs an instrument. He sticks to his guitar, though.

“They don’t need me to scratch around,” he said with a wry grin.”

Alvie and Bob Walsh, another of the original group, came to the area in the early 80s according to Noel Scott. He’s been playing with them ever since.

“This is part of our life here,” Noel said. I’ve always played. You miss it if you’re not here. Its hard to explain.”

Noel was also once a fiddler. He, like Alvie strums the guitar because according to him, his hearing isn’t what it used to be.

There are younger members of the group who have come to embrace the jam as a “family” outing. Steve Assenmacher strums along on the bass, adding a deep, but subtle beat to the higher-pitched fiddles in the circle.

As some groups talked about the recent storms system that passed through the Ozarks on Nov. 30, Assenmacher recalled the time he brought friends to the gathering.

“They knew everybody already,” said Assenmacher.

On the other end of the general store, a game of Pitch was underway and bids were being made on the number of points each player would take in the tricky game.

Meanwhile, conversation and chatter overtook the other tables.

The music played at the McClurg Jam is considered Old-Time, or hoedown. Emphasis was made that music is not Bluegrass.

Bob Holt is a household name in the Ozarks. The renowned fiddler loved to play anything that suited his fancy for old-time music. He passed away in 2004, but his legacy lives on at the McClurg General Store.

He was the one who lovingly played with Gordon McCann, who still plays today, and taught the next generation the infectious love of music.

David Scrivner, once an English teacher, picked up the music bug from Holt. One of the youngest players in the group, he led the musicians into song. Some high tempo, and others slow and amicable to the ability of older players.

Scrivner now works at an accounting firm. Despite not following an education in music, his father was determined that “his boys were going to play music.”

He started on the mandolin, an instrument suited for the stature and build of a young boy. Through the guitar, David made his way to learning the fiddle.

“It was hard to learn the bow, it’s very subtle, it squeaks,” said David.

He took lessons from Bob Holt, who showed him the intricacies of the fret-less instrument. It wasn’t long before Holt put David in the circle believing that to learn the part, a fiddler had to play with other musicians.

“This is where I feel I learned to play,” David said. “Sitting here with the older guys.”

The group meets every Monday and are easy to find, welcoming all musicians and visitors. All that is ever asked is that you bring a piece for the potluck and leave a donation to keep the culture of Missourian music alive.

Find the Jam at Highway 76, South on Hwy W, 4 miles on the left at McClurg Road