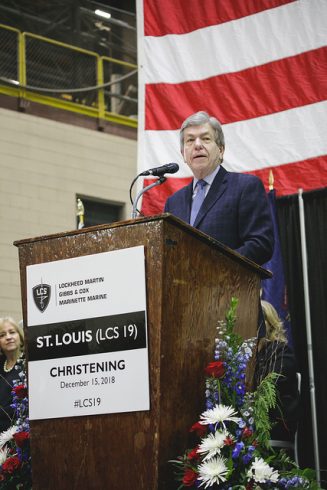 Blunt released the following statement after the ceremony:

“It was an honor to be part of the future USS St. Louis christening ceremony. This is the seventh ship to carry the name of this great Missouri city – from the early years of the American expansion as a Sloop-of-War, through the Civil War as an ironclad gunboat, to supporting the Allies as a troop transport and protected cruiser during WWI and supporting the Pacific theater as a light cruiser during WWII, and finally as an amphibious cargo ship between 1969 and 1991. I have no doubt the future USS St. Louis will continue that long, proud history. It is a symbol of the enduring connection between St. Louisans and the United States Navy. It is also part of our commitment, as a nation, to strengthening our defense and keeping America safe. President Truman once said, ‘Carry the battleto them. Don’t let them bring it to you.’  The addition of the future USS St. Louis will enable the Navy to do just that.”