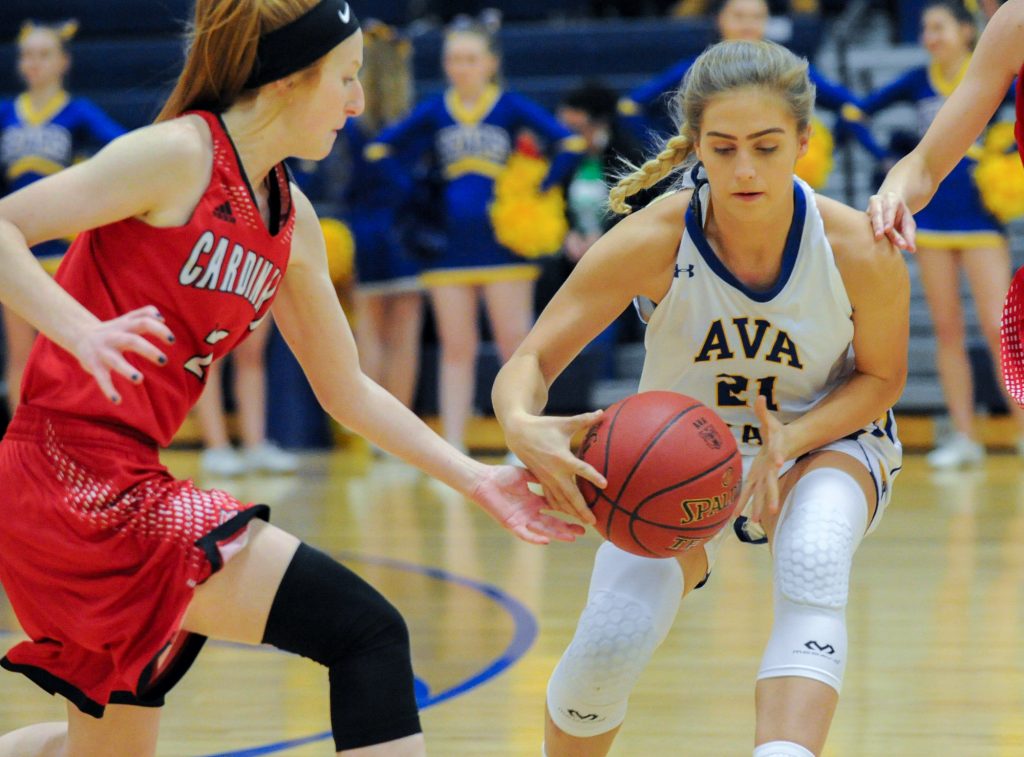 Ava High School senior Ashton Bewley (21) gains control of a loose ball during a game against the Chadwick Cardinals on Monday, Dec. 10, in Ava.

The Ava Lady Bears seem to have shaken off the season-start jitters after placing third in last week’s tournament. Monday, the Lady Bears allowed fewer fouls and ran-up the board up with a 30-point lead at the final buzzer.

Since the season opened, the varsity squad has been in the habit of giving more than 20 fouls per game.

Now, with plenty of court time under their feet, the Lady Bears allowed only 12 whistles on Monday, giving a mere 6 points to the Lady Cardinals at the stripe.

“I’m really proud of the girls. They are off to a good start and I hope we can keep it going,” said head coach Nathan Houk.

Lauren Mendel lead the Lady Bears with 15 points, assisted by Ashton Bewley and Hanna Evans with 14 and 11 points, respectively.

Early in the game and from past experience the varsity bench had their sights set on Cardinal senior Stevi Jones, a top-notch player who left an impression on Houk last year.

“She is a really good player. Last year we played them at their place and she hurt us. We knew we had to concentrate on her and do a good job on her,” said Houk.

Jones was able to put up nine in the first half and only seven in the second half, cut off from the lane and meeting the Lady Bears defense at nearly every pivot and turn.

This wasn’t the case for Ava, though. The Lady Bears opened the  first quarter with 23 points, lead by Bewley with eight and Evans who, with one from the arc, contributed nine.

On defense, Ava held the Lady Cardinals to just 8 points, six from Courtney Grimes who sunk two from a foul drawn in the first quarter.

Meanwhile the Lady Bears were  making distance with a run of seven  followed by another of 12 points to close the first ahead with a 15-point statement.

Into the second quarter Eden Little was able to change things up for the offense, running the lane and shooting from downtown for five points.

Normally Little finds herself helping to set up the offense and sends the ball to the wings. Monday, she capitalized on Chadwick’s defensive mistakes.

“It’s her job to get us in the offense, to get the ball to the wing when the other team is in the zone,” said Houk. “She takes advantage of what the defense gives her. She was able to slice in and get in the middle of the floor for us and get some easy buckets.”

Lauren Mendel lead in overall scoring, adding to her tally through all four quarters as opportunity presented itself when Chadwick sent in subs.

“They had a tall, athletic post player,” said Houk. “We know that when they would sub, we would have a mismatch in the post, so we would feed Lauren.”

The senior has been a force to reckon with this season as she can tap-in twos from beneath the bucket. Paired with the experience and speed of Bewley, the pair create a defensive conundrum when the opposing defense tries to play the zone.

“When we can get those two going offensively, it opens things up for other players,” said Houk.

Even a good defense has trouble slowing-down the post without opening lanes for two from the offense.

The Lady Bears served up 12 points in the third, slowing down just a bit to give some younger players some court time in the fourth once Ava pulled ahead by 30. Freshman Lauren Hall would make an appearance, adding two to the tally. 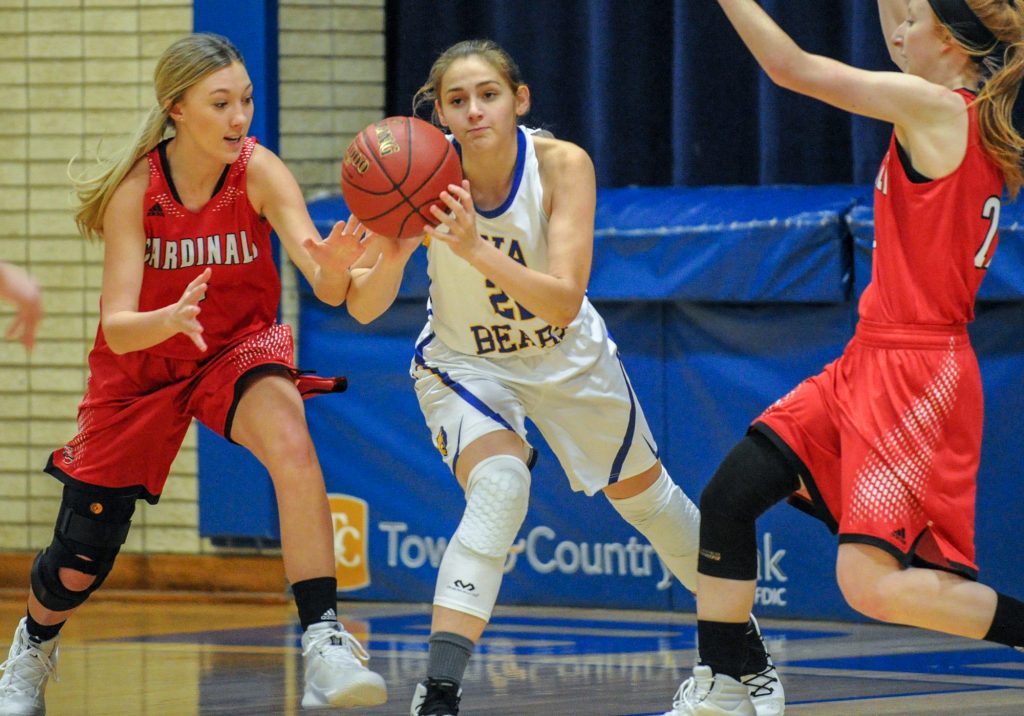 Ava High School forward Emily Stillings passes the ball out of double coverage durng a game against Chadwick on Monday, Dec. 10, in Ava.