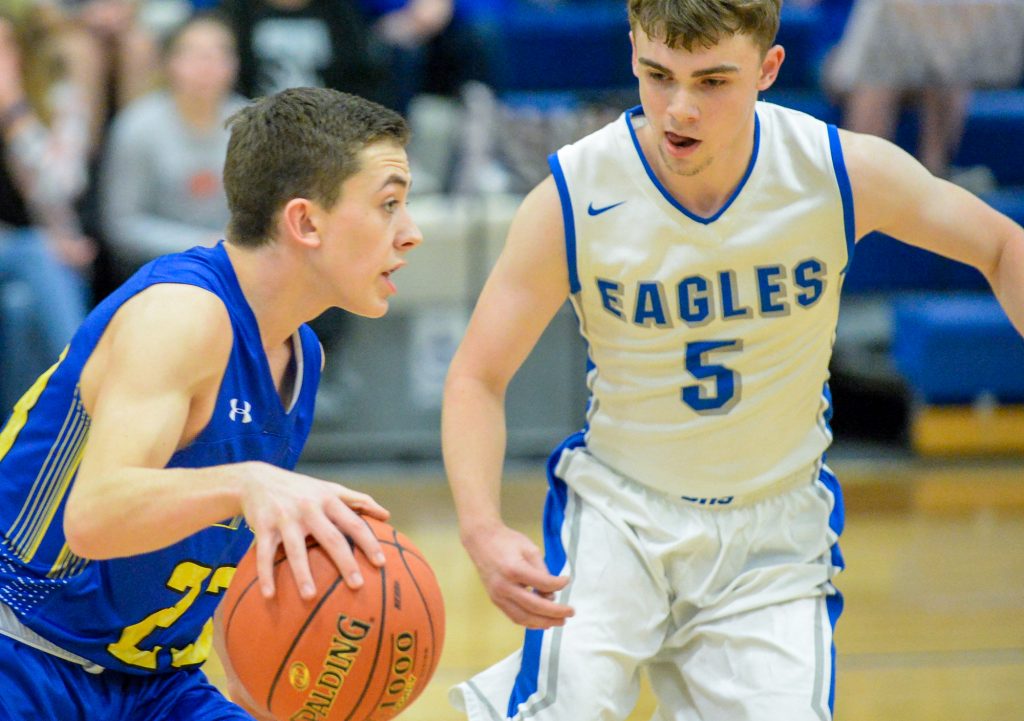 Ava High School's Kaden Bruce (23) dribbles the ball down the court during a game on the road against Bradleyville on Tuesday, Dec. 11.

Runs is a term normally used in Baseball, but the Bears were able to run the board up a few times Monday.

In addition to the point-sprints, the Ava High School boys varsity squad drew several fouls instead of giving them.

The Bears pulled 21 fouls from the Bradleyville Eagles offense for 18 points at the charity stripe, giving back only nine.

The Bears set the tone for the match in the first quarter with Andrew Dalton sinking two from the arc and tapping twos in for 14 points. Blake King aided in opening the game with two long-balls of his own, leading Bradleyville 30-20.

Dalton continued to be a pain in the Bradleyville defense, drawing fouls for 5 points and putting up another six to increase the Bears’ lead  to 50-38 at the half with a run of ten in the second quarter.

The Eagles did show their strength in the first half despite trailing on the board.

Ethan Todd, Wes Jennings and Gavin Lux worked together to make 16 of the 20 in the first quarter for Bradleyville.

Giving up fouls hurt the Eagles, who allowed seven to Ava’s Dalton in the first half.

Coming out of the locker room after the break, Bradleyville decided to play an ace from their sleeve, showing their hand with 15 points from Brady Rogers, who had a relatively quiet first half.

The Bears cooled Rogers, in the fourth along with  Dalton after he  stacked-up 25 before the break.

It would appear that the Eagle defense learned how to pressure him and keep him occupied and away from the bucket.

“He didn’t get very many touches in the third, so we made sure we could establish him and throw him the basketball in the paint,” said head coach Mike Mallow. “That helped us blow the game open.”

Covering with two or even three defenders on Dalton at the post, Bradleyville opened themselves up for attacks from outside as focus remained on keeping Dalton guarded.

“It’s funny, we hit some threes there late to blow the game open. It’s because we had Andrew in the post and they started collapsing in,” said Mallow.

Blake King added five in the third quarter, aiding brother Drake King who hit the net for seven. The Bears were also able to push mistakes on the Eagle defense, pulling another four from the stripe.

With the attention on Dalton and the Bear defense shutting down Bradleyville’s Rogers, it was time to get to work.

Kaden Bruce normally works his magic at the key as the team sets up the offense for a strike at the hoop, but he was able to show his abilities on the scoreboard

Bruce struck twice from the arc and even threw in a field goal as he took advantage of the defense collapsing around Dalton under the net.

“He’s a good shooter when he is open, we want him to shoot,” said Mallow. “A lot of the time he is not open, he is triggering the offense.”

Blake King and Caleb Johnson both hit the hoop from the three-point-line. Combined with teamwork from Drake King, the Bears were able to make two, 8-point runs in the second half.

With the Bears doing some serious damage on the court following the break, the game was not without a little humor.

Coach Mallow was trying to take a time out  to swap out  players to give some experience to others on the roster while the Bears were comfortably ahead.

As the referee finally caught on to the timeout call from the Ava bench, Caleb Johnson found himself open on the right side of the arc and fired away.

“We had some guys we wanted to get in the game, to give a couple of minutes of playing time,” said Mallow. “I called a time out to get them in.”

The ball would go dead on the whistle, just as it hit nothing-but-net.

Johnson heckled Mallow on the call as he returned to the bench for the time out.

“He wont let me live it down,” said Mallow, smiling about it after the game. 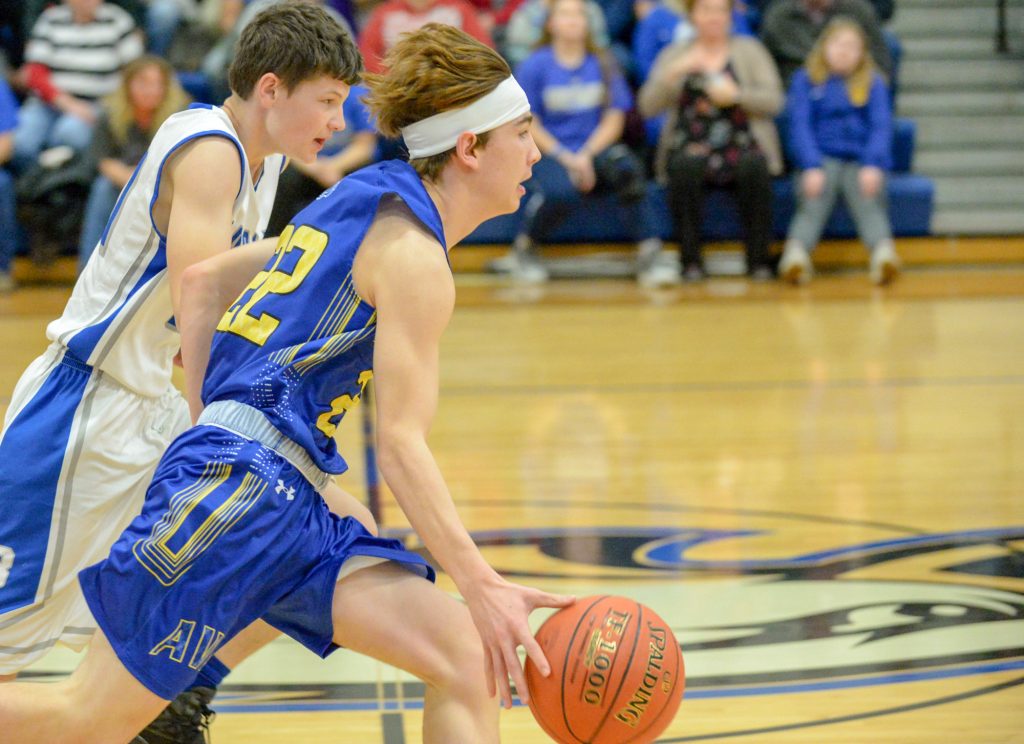 Bruce wound up with the ball and seconds left to play. He played it out at the key, seconds falling with the sound of a dribbled ball until the buzzer sealed the 95-70 victory for the Bears.

With smaller-classed school districts, often come fewer players to use for junior varsity and varsity games. Players can hit the court for no more than six quarters in one match between schools.

The junior varsity squad played an abbreviated game consisting of two quarters of play time, where the JV Bears walked out with a 25-20 win over the JV Eagles.

Mason Cole and Dylan King lead the first  abbreviated half for the Bears, putting in a combined 9 points. Ethan Donley was able to take advantage of a quick trip to the stripe for two.

The Eagles’ JV squad was limited to 9 points, lead by Trevor Wanner with four.

Zak Miller lead in the second abbreviated half, tapping in a field goal and accepting three more on fouls drawn from the Bradleyville defense.

Friday, the Bears travel to Forsyth to battle the Panthers on the road.

“Our kids, I think they play hard. They try to get better and I really appreciate their effort, Mallow concluded. “Friday is a big challenge, we’ll see what happens.”