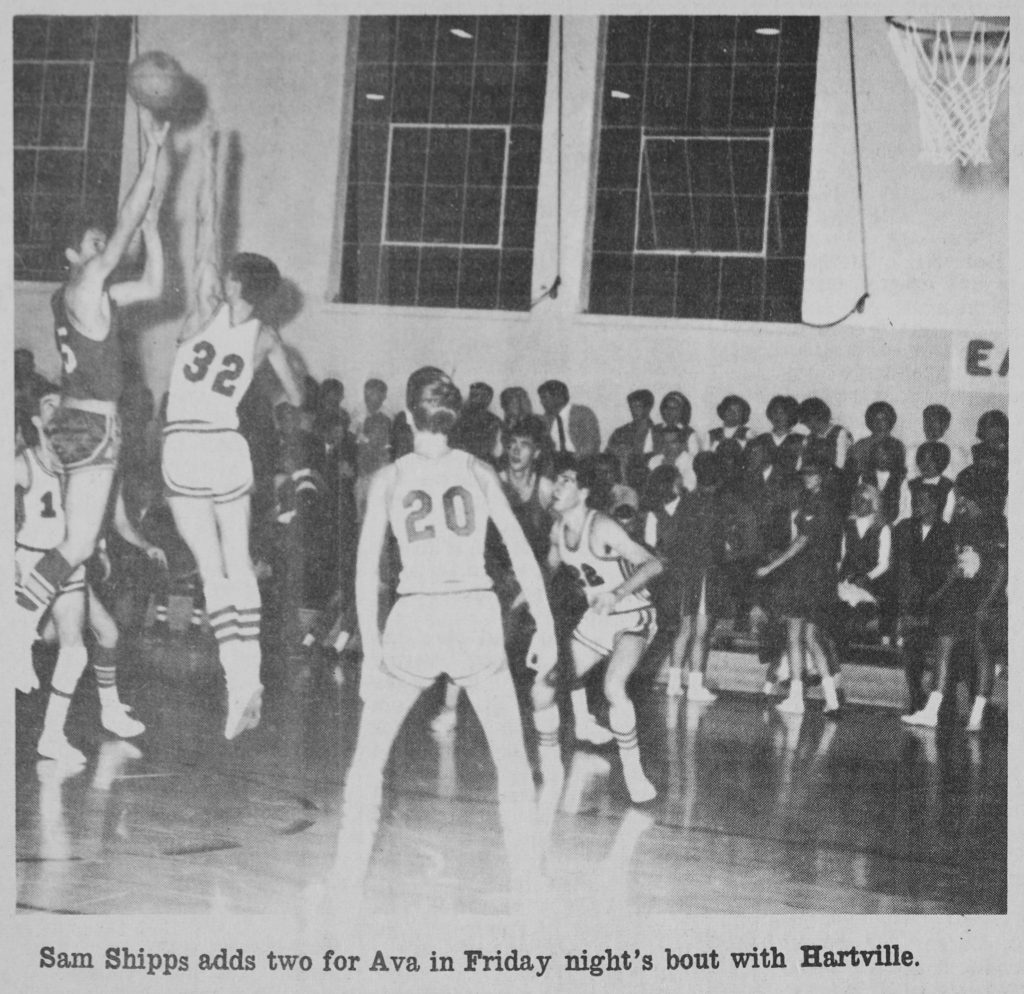 The community nativity scene at the junction of Highways 5 and 14 was erected last Saturday by a group of community volunteers. The display was constructed a year ago through a combined effort of local artists and Ava school groups. Lavon Carter of Ava Beverage is providing electricity to light the scene each evening. Among those who helped work on the display Saturday are Wilma Hutchison, David Smith, Rod VanDyne, Adrain Owen, Noel Dye, Darrell Guill, Curby Welch, Melvin Rogers, Frank Corder, and Tom Vinson.

Douglas County residents were shocked last week to learn that body parts of a lady killed in Arkansas in 1990 had been recovered near Squires, just off Douglas County Route N.  Sheriff Roldan Turner said Herbert F. Brenk, 54, of Mtn. Home, Ark., who pleaded guilty last Thursday in the murder and dismemberment of his wife, led authorities to a container that held body parts and was sealed with concrete. The container was found at the junction of Routes N and P, southeast of Squires.

Mrs. Beverly Surface is the Skyline Volunteer of the Month.

Ed Branham, of Ava, celebrated eight months with a new heart on Dec. 1.  Branham, 50, underwent a heart transplant on March 31 this year at University Hospital, Columbia.

Miss Irene Tibbitts, an Ava High School senior, was crowned “miss Merrie Christmas” by Mayor Fred O. Lethco in a ceremony performed in the center of the square following the parade.  Saturday’s Christmas parade attracted one of the largest crowds ever to attend a parade here, according to some local citizens. The weather cooperated to make the parade a successful event.

An elderly Ava man narrowly escaped with his life about 1:30 a.m. Thanksgiving Day when fire destroyed his two-bedroom mobile home located in the Sunrise Hill addition west of town.  Bill Jenkins, who lived alone in the trailer, awakened to find the flames engulfing the front room and escaped barefooted with only his night clothes.

A new garage and salvage business was opened this week by Chuck Jones and Virgil Welch, both of Ava.  The firm is located two and a half miles north on old Highway 5 at the city dump turnoff road.

Visiting in the Shorty Robertson home Sunday was their son, Henry, who is attending Southwest Missouri State College in Springfield.

A total of 2,280 bags of Christmas candy was sacked for the children attending the parade Saturday.

The Ava High School Bears were eliminated from the Forsyth Tournament Tuesday  night, falling to Hillcrest 76-54 in the end of the first round.  Top-seeded Gainesville overcame a first-quarter deficit to down Branson 60-48 in the first round Monday night. Bradleyville blew a nine-point halftime margin before coming back to knock off fourth-seeded Chadwick, 73-64 in overtime.

Sergeant Arless Shipley, son of Mrs. Anne Shipley of Dora, is among a group of men listed as wounded in action in the Mediterranean area, listed by the war department, according to a news release in the Springfield Leader and Press.

SMALLETT –– Mr. and Mrs. Raymond Sellers had their daughter, Mr. and Mrs. James Norman and children, Gayle, Kris, and Phillip, and their son, Mr. and Mrs. Billy Sellers and sons, Randall and David, of Charleston as dinner guests Thanksgiving.

Mr. and Mrs. V.A. Shull, Jr., and children, Dale, Terril and Cindy, entertained at their new home in south Ava on Thanksgiving Day when they hosted a holiday family dinner. The menu was serve at noon to Mr. and Mrs. Vernon Ray and son Lyle Wayne, Mr. and Mrs. Olen Deckard and daughter, Debbie, and Mrs. Edna Shull, of Ava; and Mrs. Glenn Hibbard of Piedmont.

Leonard Earnest Stewart, 32-year-old employee of the Reed-Harlin Grocer Company here, was fatally injured in a truck collision on Highway 5 Monday morning about 9:30 o’clock as he was driving from here to Mansfield. Isaac Lansdown, 40, who was riding with Stewart was injured. The two men were going from  Ava to Mansfield in a Reed-Harlin truck.

Mr. and Mrs. Elmer Elliott of near Sweden received a letter this week from Mr. Elliott’s brother, Corporal Manie Elliott, of the U.S. Army. Relatives had not heard from  him since before Christmas last year.  Corporal Elliott said in  his letter that he was in the hospital but that he would be out in a few days.

Harlingen Army Air Field, Texas –– Another class of aerial triggermen to guard Army Air Forces’ bombers was graduated this week from the Harlingen aerial gunnery school. Among the qualified “sharpshooters of the Sky” was Chester Wade Hartley, first class private, son of Mr. and Mrs. A.L. Hartley of Ava.

A surprise dinner was given at the home of Mr. and Mrs. Louie Swearengin west of Ava in honor of his mother, Mrs. Martha Swearengin, who was celebrating her 75th birthday.

A pie supper at Champion School House Friday night netted $67.88 for the USO. Chocolates for the most popular young lady went to Miss Inez Prock, and a rooster offered for the henpecked husband went to Rufus Stout.  E.C. Henson officiated as auctioneer.

The American people have been asked by the Office of War Utilities to confine Christmas lighting decorations to Christmas trees inside private homes.

Ava High School basketeers scored another victory Friday night when they defeated the Gainesville High team by a score of 27 to 22.

NEW YORK –– Nurse Virginia Clous at Shore Road Hospital here, with baby Mary Ann Maccitt, who was born six days ago, three months prematurely, weighing one pound and ten ounces.  The child, living on a diet of mother’s milk and whiskey, is reported as thriving.

Black market operations in occupied France have reached the point where color shades are being used to distinguish reasonable from unreasonable illegal trade.

Ava Lumber Co. –– Paint-Up for Winter, Kemtone, Gal. $2.98.  The wall finish that can be applied over any surface.

No plans are contemplated for lifting the ban on school attendance in Douglas County due to the prevalence of influenza.

Herbert Hoover, federal food administrator, addressed the people letting them know food restrictions have been generally removed.  The message was read in churches of the country Sunday morning.

Lon Klineline, prominent farmer of three miles north of Ava, contracted last week for the sale of his 290 acre farm to Virgil Enright of Pan Handle, Texas. Consideration $14,000. The new owner is to take charge on Sept. 1, 1919.

Deputy Sheriff Grant Eslick made a trip to Webster County one day last week to arrest Cecil Wingo and Bert Silvey, charged with giving whiskey to a minor and with bootlegging.  Wingo and Silvey were indicted at the September session of the Douglas County grand jury. Both gave bonds for appearance at the January session of Circuit Court.

Mrs. Rebecca Davis, mother of W.S. Davis, prominent farmer of Ava who died recently from an attack of influenza, has received $2,005.86 from two life insurance policies of the deceased.

RICHVILLE –– A deer was seen about 1/2-mile south of Richville Friday morning. It was the first time that one had been seen in this section for about 25 or 30 years.

In no other nation is there so willing a sense of voluntary self-sacrifice as in America –– that was shown in the abstinence from wheat.  Food conservation in America has been the triumph of individual devotion to the national scene.

CHAMPION NEWS –– We are having beautiful December weather at the present writing.

TIGRIS –– We have had some beautiful weather lately.

James Ellison shipped a car load of hogs to St. Louis Saturday. Prices range from 12 to 15 cents here. Jacob Wimmer took a bunch of hogs to Seymour Saturday which he sold for 10 cents, so we were told.

E. L. Moorman and family “forded” over to Noble, Ozark County, one day last week, and at last account were still there unable to “ford” it back.

Not in recent years, perhaps, has the coming of any public character aroused such widespread interest as has the proposed visit to Kansas City and other western cities of L.T. Cooper, the Millionaire Philanthropist. Mr. Cooper is described as one of American’s foremost leaders of advanced thought, and sprang into fame and fortune through his new health theories based on what is known as the Tanlac treatment. The demand for it has been nothing short of phenomenal. In Seattle, Washington, over 50,000 bottles were sold in eight weeks.

[Tanlac was a 36-proof mixture of wine, glycerin and bitter herbs marketed as a “system purifier,” laxative and treatment for catarrh, which was an elaborate euphemism for mucous. In later years, Tanlac was described as a “sky-rocket in the pyrotechnics of fakery” as the elixir relied on false testimonials to dupe consumers.]

The French government has decided that in future foreigners, even making a sojourn of a few months in France for business purposes, must declare themselves to the police in accordance with the recent law.

The Missouri Supreme Court has ruled that the law exempting physicians from jury service does not apply to dentists.

At. Selma, Ala. Sunday night, A.S. Tanner and Ralph Grant quarreled about escorting Miss Virginia Glesson from church. Tanner had the girl on his arm and Grant attacked him. Grant was killed.  Tanner is now in jail. The girl was made insane by fright.

In his charge to the grand jury at Warrensburg, Mo., Judge John E. Ryland declared in favor of the whipping post for minor offenses.

William and Samuel Conrad, the brothers who killed five White Caps near Luconia, three months ago, are en route to Kansas where they intend to begin life anew.

St. Louis is to have another bridge across the Mississippi.

In Columbia the female population largely exceeds the male.

A wedding in Marble Hill was nipped by the arrest of the bride groom by the sheriff.

Mush and milk have taken the place of cream and cake at the LaGrange Church festivals.

A wood hauler of Chillicothe stacked up his load and burned it because he could not get $3 for it.

The latest wild beast to appear in Mississippi County is a squirrel with tusks two and a half inches long.

A deer was lately killed in Montgomery County that had a “half crop” in each ear, and has been  hunted for years.

The style of Missourian who tries to combine equestrianism and whiskey is getting killed with considerable frequency.

The dry spell has caused a great demand in Audrain County for the water wizard, the man with the forked stick, and he is finding wells right along.

The game laws of Arkansas are severe on aliens, and the Arkansas population in the wooded counties  now devote themselves to catching and prosecuting Missourians who invade their wilds to hunt.

Pancake socials are all the go in Webb City.  The flapjacks delicately browned, bathed in maple syrup and served by the pretty girls of the town, are enthusiastically received by citizens of every degree.

Bacteria are likely to be blamed for all the ills that flesh is heir to. Prof. Schenk now maintains that what we call a “cold” is really due to these invisible pests. When one enters a cold room after being heated, the bacteria in it flock to the warm body and enter by the open pores of the skin.  Whatever may be said of his hypothesis, he seems to have proven by experiment.