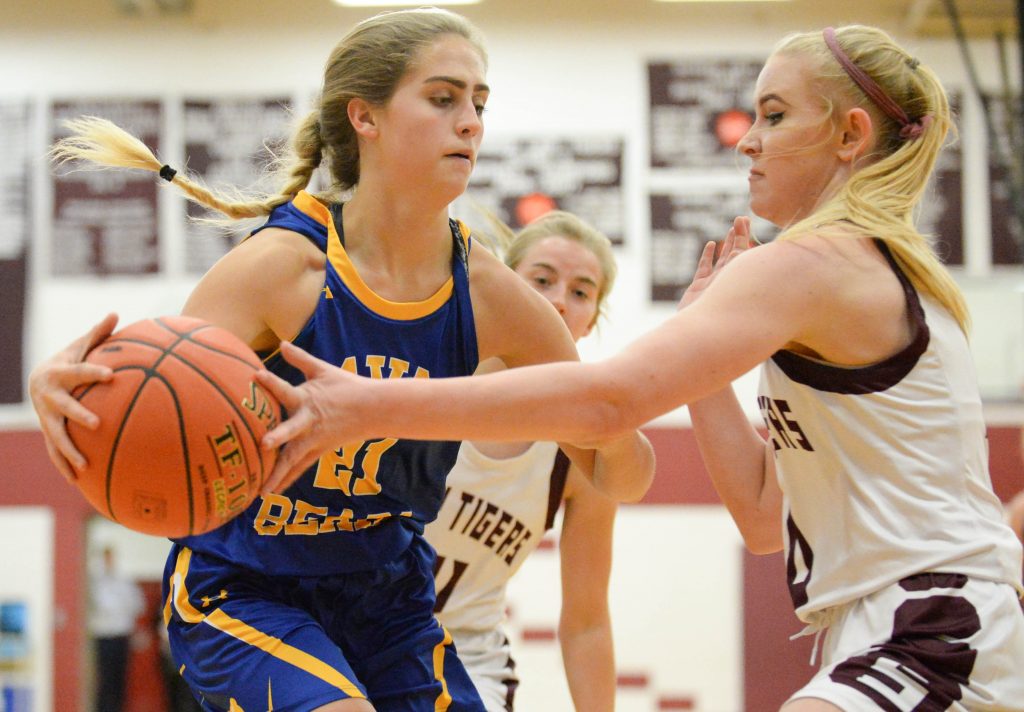 Ava High School varsity player Ashton Bewley (21) drives the ball near the baseline during a game on the road against Seymour High on Thursday, Nov. 29. (Jason Hoekema/Douglas County Herald)

The Ava High School Lady Bears took to the asphalt against the Seymour Tigers Thursday, Nov. 29.

The varsity and junior varsity squads merged for a single game  against Seymour’s 9-girl roster, bringing matching 2-0 records since their season debut with wins over Hollister and Conway High.

Shy by a few games to call a trend, the Lady Bears have come up with five strong offensive players who can shoot from under the rim or on the paint against their opponent.

Last week against Conway, Claire Fossett lead with 13 points followed by 12 from Ariana Evans and 11-each from Lauren Mendel and Hannah Evans. The Lady Bears also feasted on 18 points allowed by Conway.

This week Lauen Mendel lead with a 9 field goals and two free throws earning 20 for the Lady Bears, carrying the squad to a 76-47 victory over the Lady Tigers.

Coach Nathan Houk saw an opportunity in the first half in a mis-match from the Tigers against Mendel.

“In the first half we noticed that their (taller players) were in foul trouble and they had to match a smaller player with Lauren,” said Houk. “So we had a mis-match in the post, we were going to feed her (the ball) as much as we can.” 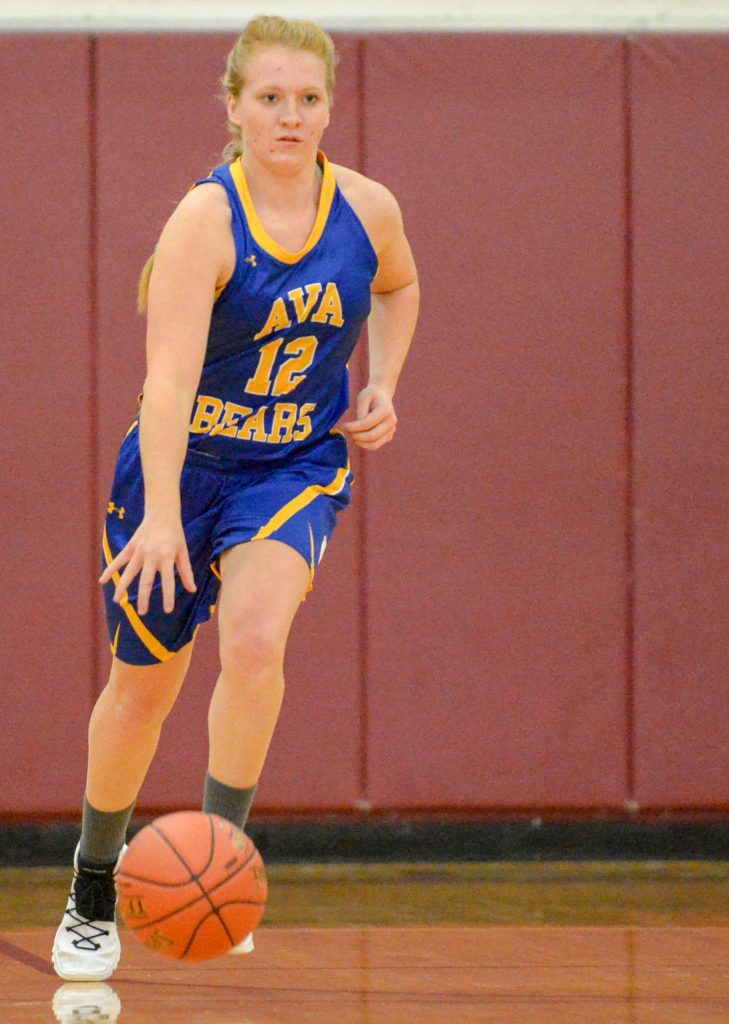 Ava High School’s Eden Little (12) dribbles the ball downcourt during a game on the Road against Seymour on Nov. 29.

The Lady Bears struggled with defensive fouls, accumulating 12 fouls in the second half on top of ten before the break.

“They were calling it pretty tight. When you have a big lead, it is hard to yell at the officials,” said Houk. We have to learn to adjust when they are calling it that tight, adjust defensively and learn from that, though.”

Claire Fossett and Ashton Bewley added another 10 points each, sinking the 20 in the first half leading the Tigers 40-24 going into the locker room after the second quarter.

With 14 field goals from Mendel in the third quarter, the fourth went to several freshman players who held-down the court with 16 additional points.

Lauren Hall got a taste of varsity game time driving the lane against some of Seymour’s starters, sinking one and drawing another point at the stripe.

“There for a while they were playing against the Seymour starting five. I thought they held their own and did a really good job,” said Houk. I would like to have to seen a tougher game to prepare us for the New Covenant Tournament, because there is a couple of really good teams in there.  We’re going to have to play better on both ends of the floor to beat those guys.

This week the Lady Bears are in Springfield playing in the New Covenant Tournament.