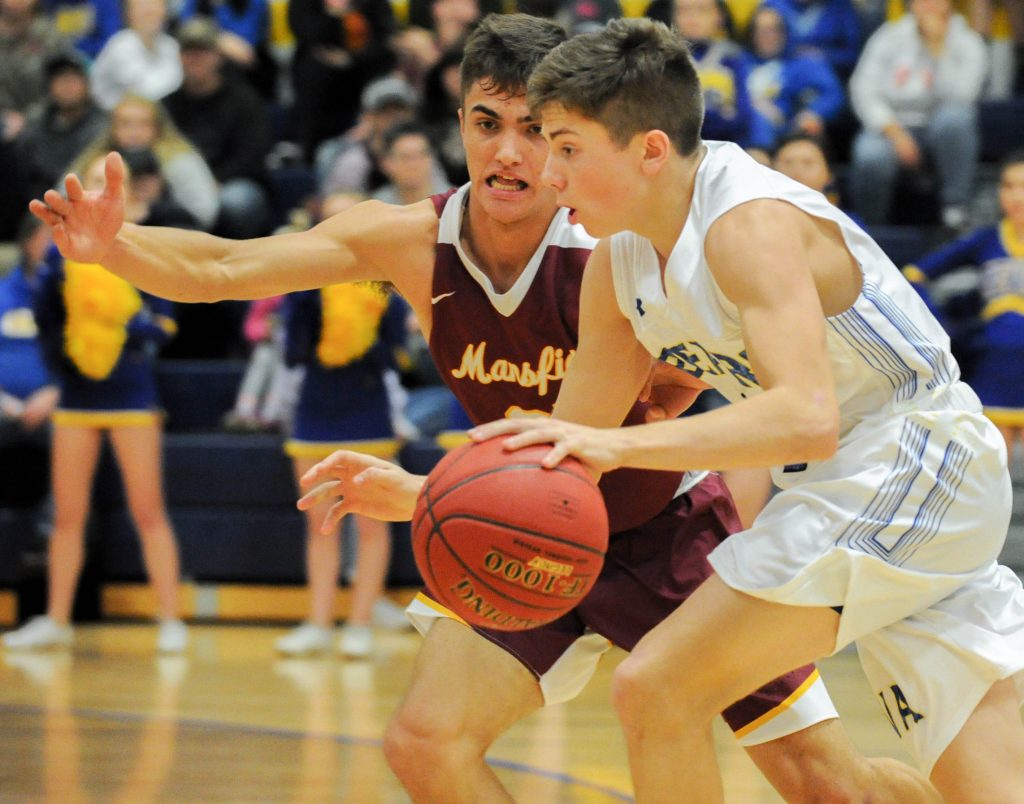 Yet the loss didn’t distract from the special group of players coach Mike Mallow has enjoyed coaching this year.

The Bears opened the first quarter with numerous offensive attempts at the Mansfield Lions’ basket, limited to three field goals against the defense.

Blayne Mendel loaded two from outside the arch, aided by one each from Blake King and Tom Emerich.

Freshman Andrew Dalton was able to draw several fouls, adding seven from the charity stripe to help knot the game at 28.

In the second, the Bears trailed by 11 as the Mansfield defense cooled shots from the three and closed lanes for layup attempts. The Bears were able to able to draw fouls for 9 points, but came up short, 58-47, before heading into the locker room for the break.

It appeared that both teams made adjustments before heading back out onto the court for the second half. Changes on the Bears’ bench allowed Dalton to shine in the third quarter.

“They were doing some special things to try and slow him down a little bit,” said Mallow. “So we came out after the half and ran a couple sets for him to try and get him isolated, give him a chance to play.”

The Lions turned up the heat at the basket, putting in 18 points on top of the active first half for Mansfield.

The Bears appeared to shift to their long-ball game, shooting 4 of 8 from the three for 12 points in the third. Andrew Dalton was able to squeeze through the lane, drawing two fouls and adding four to his total 27 for Ava.

Blake King took the reins in the fourth, leading the Bears tally with 10 points. Despite the heart-fought effort by the Bears, they fell to Mansfield 97-80 at the last buzzer.

Mansfield’s Dylan Caruso, standing at six-feet-seven-inches, was a force to be reckoned with through the game. Leveraging both height and experience, the senior put in 28 points for the Lions and created challenges for Ava.

“The thing is, we can play zone and pack around him to slow him down, but then you give up wide open threes,” Mallow said. “My thought tonight was to create tempo, turn the ball over before they got it to him.”

Mallow has plans to deal with Caruso at the Mansfield Tournament, stating the team would “have something cooked up” for the senior.

Fouls hit both teams where it hurt, with a whopping 34 whistles blown in the first half and another 24 after the break.

Lions’ Payton Watterson and Caruso took advantage of the fouls drawn by Ava, accounting for 25 points from the stripe on top of 35 two-pointers.

“It was a hard-fought, frustrating game for all of us,” said Mallow. “That’s one of the things, we have to learn how to handle adversity a little better. It’s all a learning process and handling our frustrations is part of that.”

Caruso later fouled-out with debate on the number of fouls the player had allowed to the Bears. Tom Emerich and Drake King also fouled-out, King receiving a technical from one of the officials.

Mallow is looking forward beyond the next match-up, excited about the core of incoming freshmen on both squads. He thinks the town is enjoying the talent on the court as well.

“Our fans are showing up, and I think they are enjoying the brand of basketball we are playing,” said Mallow. “I hope they will keep following these guys and support them. They are going to play hard, I promise you that.”

The junior varsity squad faired better against the Lions, a confirmation-of-sorts of Mallow’s thoughts on the new blood in Ava.

The JV Bears took advantage of open routes and taps to win their match 45-33 on Friday. Sophomores Payton Evans and Mason Cole led with a combined 21 points. Three long-balls from Quinton Donley added an additional nine throughout the game.

The JV Bears knotted a slow first quarter at 6 points, Cole and Jacob Gillies changed the tempo on the Lions in the second, pulling the Bears ahead 25-16, limiting the Tigers to just 10 points. Zak Miller and Evans returned from the locker room to keep the lead going with a combined 12 points in the second half.

Fouls returned to hurt the Bears, who allowed 27 whistles and only making-up six points from fouls drawn from the Lions.

The number of fouls is just an after-thought when considering the athleticism presented by the Bears.

“We’re going to foul some,” said Mallow during an interview after last week’s game against Gainesville, where the Bears pulled-off a 54-52 buzzer-beater thanks to a steal and layup by Donley.

But the Mansfield JV didn’t return the favor at the charity stripe, keeping out of the bonus with only 6 fouls in the first half, and allowing a late-game bonus in the second.

This limited extra shots to just seven, six made, for the Bears. The JV Lions made the best they could of trips to the line, making  only 14 of 33 potential points on free-throws.

Following the conclusion of the Mansfield Tournament the Bears will travel to Bradleyville on Dec. 11.