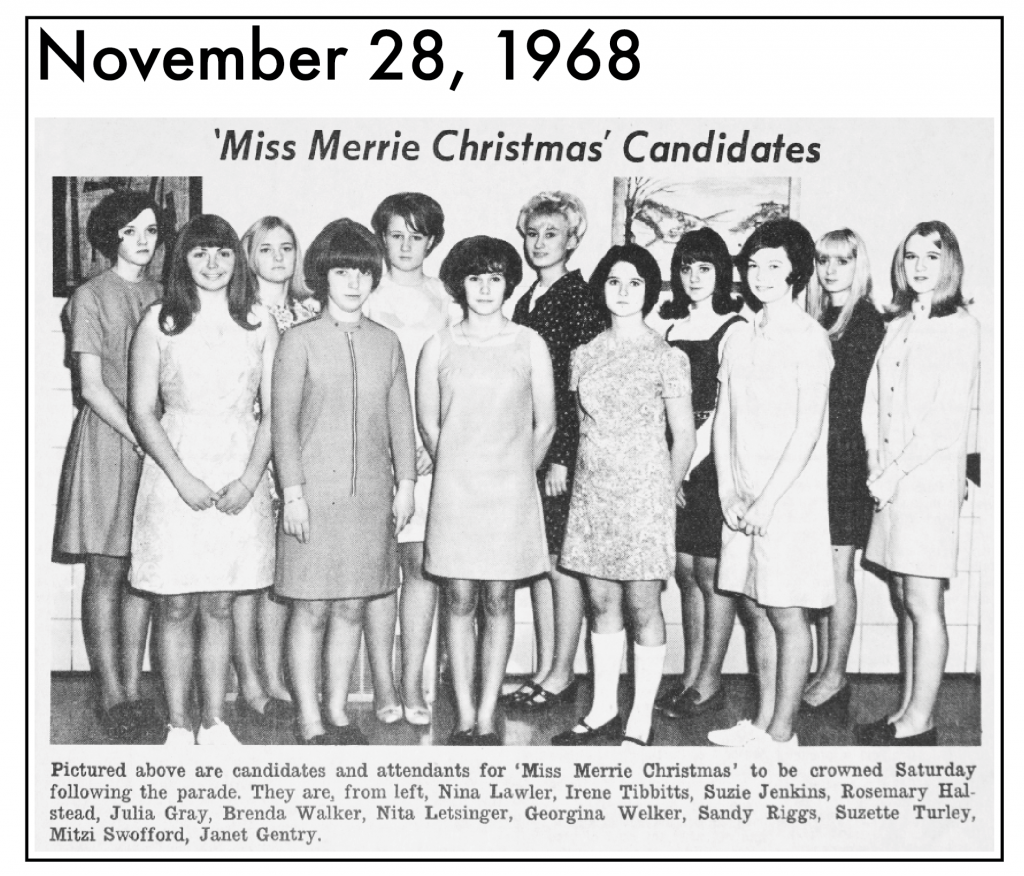 Hilltop Preschool won first place in the ‘Fantasy’ category with their float entitled, “Whether It’s Past, Present, or Future, Always Balance Your Christmas.”

Gertie Fulton will be the guest of honor Dec. 18 at Chicken Mary’s Restaurant in Joplin for her 100th year-old birthday dinner party.  Mrs. Fulton lived most of her life at Rome, Mo., in Douglas County.

Clarence and Bernie Sallee, Thornfield, will celebrate their 65th wedding anniversary Dec. 12 with a reception at Igo Baptist Church. The celebration is being hosted by their children, Norma Griffith, Imogene Ewing and Janiss Bryant, and families.

Joe Harley, Ava, Corrections Officer III, has been named as the Ozark Correctional Center Employee of the Month for November 1993.

Harley Allen, of Ava, scored a hole-in-one at the Ava Country Club golf course Tuesday afternoon.  Allen’s ace came on the No. 7 hole and was stroked with a 5-wood. Witnessing the hole-in-one were Ronnie Lansdown and Jim Curry, both of Ava, and Leroy Allen, of Gainesville.

At a meeting of the student body of Ava High School Monday, 12 students were chosen to participate in the “Miss Merrie Christmas” event, sponsored annually. Three senior girls, Miss Nita Letsinger, Irene Tibbitts and Sandy Riggs, were selected to compete for the title.  Two seniors and three girls from each of the other high school classes will serve as attendants. They are Mitzi Swofford, Janet Gentry, Suzette Turley, juniors; Julia Gray, Rosemary Halstead and Nina Lawler, sophomores; Brenda Walker, Susie Jenkins and Georgina Welker, freshmen.

Another new business will be opened on the public square here Friday, it was announced by Paul Mabe of Springfield, owner. The firm will carry a line of toys, housewares, sundries and a variety of other items. Operating the store will be Opal Pool, Marie Sherman, and Jean Watson, all local women. The firm is located in the former Norman Variety building on the north side of the square.

The Ava football Bears ended their season in seventh place in conference and all-game standings among the nine SCA teams.  Leading the conference teams were Cabool and Salem tied for first, Cabool was No. 1 in all-game standings.  Sam Shipps of Ava was named to the first all-conference team on defense. Honorable mention went to Givans, end; Kivetts, tackle; Potter and Litwiller, guards; Hart, center; and Barnes, back.

Members of the Hunter Community Club met with Mrs. Lloyd Weast, Jr. at the Ava Motel on November 20, with Mrs. Glenn Emerson as presiding officer.  Special guest and speaker was Miss Marilyn Wade who spoke about the varied duties of the present-day county extension home economist. Other visitors were Mrs. Albin Hayes, Mrs. Lloyd Weast, Sr., and Mrs. Vern King.

President Roosevelt, Prime Minister Churchill and Premier Josef Stalin have opened a momentous conference in Iran and Generalissimo and Madame Chiang Kai-Shek also are there.  The Chinese had conferred with Roosevelt and Churchill in Cairo, and it was believed Chiang would  not confer with Stalin as Russia is not at war with Japan.  This morning the Associated Press reported from Cairo that President Roosevelt, Prime Minister Churchill and Generalissimo Chiang Kai-Shek had held a five day conference, binding their nations to an agreement to beat Japan into unconditional surrender and strip her of all her imperialistic gains of the last century.

Gainesville High School, defeated twice this season by the Ava High School basketball squad, will meet the Ava Bears here Friday night. Ava won its fifth game of the six it has started Tuesday night against Mansfield on the local court. The score was 20 to 13.  Teddy Sallee was high point man for Ava with 14 points, and Charley Rush was high point man for Mansfield with 8 points.

Leon Thompson, son of Mr. and Mrs. R.R. Thompson of Ava was admitted Tuesday afternoon to Burge Hospital in Springfield to be treated for a broken arm.

Mr. and Mrs. Jack Blair moved Thursday last week to their newly purchased home on Jefferson Street. The Blairs recently purchased this cottage from J. F. Holestine. Mr. and Mrs. Vernon Jackson and two daughters who have been occupying the residence, also moved Thursday to a bungalow on Ozark Street which belongs to Mrs. Mildred Dunnigan.

Mr. and Mrs. Earl Hicks of Squires announce the arrival of a 7-1/2-pound baby girl November 29. The little miss has been named Evelyenne Caroll Ann.

Mr. and Mrs. Joe Harris this week sold their farm of 280 acres, six miles southwest of Ava, to Denzil Barnes. Mr. and Mrs. Harris did not announce their plans for the immediate future.

The first pupil morale and war information meetings for students and teachers of Ava High School was held Wednesday afternoon.

Highway traffic accidents reached a new high for this year during the month of October, when 47 persons lost their lives and 288 others were injured in the 276 accidents investigated by the Missouri State Highway Patrol. The number of persons killed during October this year was 52% greater than in the same month in 1942, before gasoline rationing, when 31 persons received fatal injuries on the highways of the state.

We were very glad to hear that the great bloody battles of war were over, but we have some self-defense battles to fight here at home, as the “flu” is getting to be very serious.  School and Sunday schools are all closed in Douglas County per order of the Board of Health, because of the new outbreak of the flu.

Chalmer C. Coble surprised his many friends by being quietly married Thanksgiving day to Miss Reta Brazeal, eldest daughter of Mr. and Mrs. J.A. Brazeal of Granada, and a very chraming girl. The ceremony was performed by Rev. S.G. Roberts. The happy couple will make their home in Ava until after the Tax Books are made, then they will reside on their farm at Topaz.

Clifford Reynolds is assisting in the Citizens Bank this week on account of all the force being sick.

J.L. Banta brought the Herald a big load of wood one day last week to renew his subscription.  Thanks.

Ben Evans, former blacksmith of Ava, has bought a shop at Fairplay, Mo.  Mr. Evans was in Ava during the latter part of last week making preparatory to taking charge of his new place of business.

Life is not merely to live, but to live well, eat well, digest well, work well, sleep well, look well.  What a glorious condition to attain, and yet how very easy it is if one will only adopt the morning inside bath.  Folks who are accustomed to feel dull and heavy when they arise, splitting headache, stuffy from a cold, foul tongue, nasty breath, acid stomach, can instead feel as fresh as a daisy by opening the sluices of the system each morning and flushing out the whole of the internal poisonous stagnant matter.  Everyone should, each morning before breakfast, drink a glass of real hot water with a teaspoonful of limestone phosphate in it to wash from the stomach, liver, kidneys and bowels the previous day’s indigestible waste, sour bile and poisonous toxins, thus cleansing, sweetening and purifying the entire canal before putting more food into the stomach.

SAN FRANCISCO –– Several thousand San Franciscans gathered in Central Park this afternoon to witness an innovation in the foot ball field.  The game was played by two elevens comprised of women, old and young, attired in abbreviated skirts and knee trousers. The game was under association rules and resulted in a score of 2 to 6. The winning team is known as the “Colleen Ravens” and the vanquished as the “Bonnie Lasses.”  Though the play was rough at times no one was painfully injured.

The United States warship Portsmouth went aground at Brewery Bay, near Astoria.

John Jennings, a convict, jumped from a moving train near Rockville, Mo., and escaped.

Three of a party of 12 Kansas young men who started on a spree, died from the effects of their over-indulgence.

Gophers are playing havoc in Holt County this fall.

Cotton and celery are announced as Dade County agricultural specialties.

That curious creature, the blind salamander, has been found in caves in Missouri.

It is estimated that streets may be graveled in Carthage at 20¢ a front foot.

Missouri’s mineral display at the world’s fair was awarded 23 medals.

The Woman’s Relief Corps has started a movement for a Union soldier’s home in Missouri.

The first state case tried by the Supreme Court of Missouri was for assault and battery.

The ladies of the Methodist Church of Belton are contemplating a possum supper about Christmas.

The Arkansas widow with 40 acres of land who advertised for a husband is receiving Missouri applications.

Forest fires have been running from one end of Stone County to the other and have done an immense amount of damage.

Quite a number of quails have been killed this season, and a corresponding number of boys have been filled with bird shot.

A lady’s hat was recently found near the slaughter house in Marceline and people are pondering over the deep, dark mystery.

Wesley Hargis, Hickory County, has gone to the penitentiary for 99 years. He confessed to being hired to commit a murder.

The Bean Creek Literary Society has decided that 30 years ago a man had a better chance to get a living, get a wife and get to heaven than he has now.

Corn shucking machines are being introduced in some portions of the state and are said to be a great success.  It looks like the husking peg must go at last.