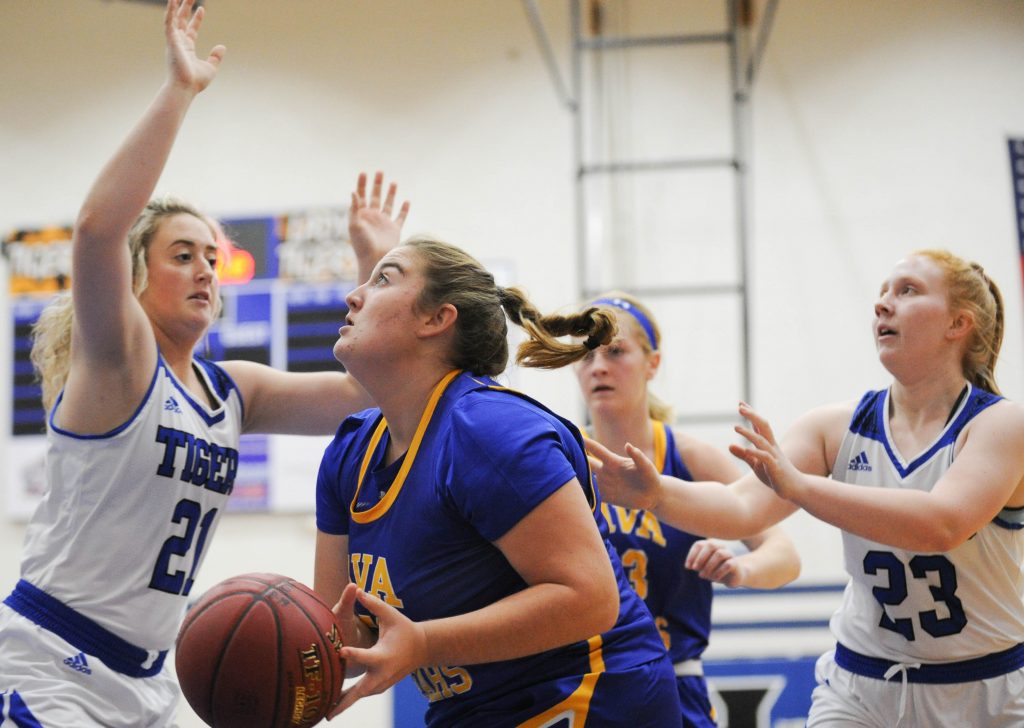 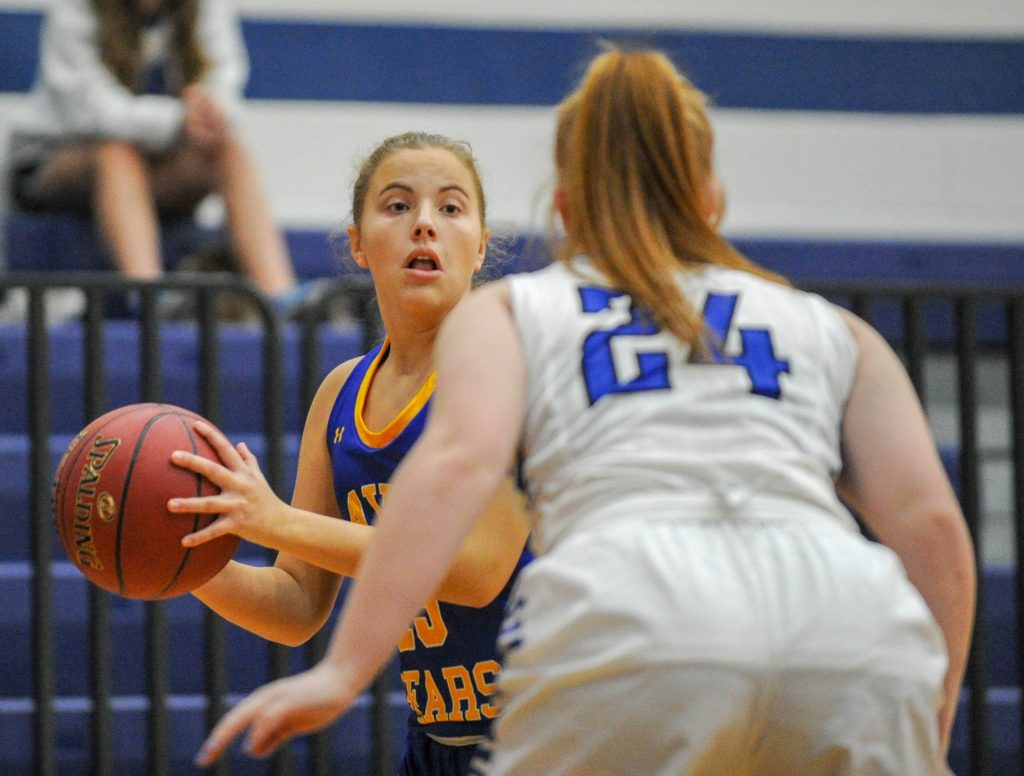 Ava High School freshman forward Hallie Smith, left, looks for an open teammate while guarded by Hollister defender Made Pyatt in Tuesday’s Class 3 District 11 game on the road in Hollister.

HOLLISTER – The Ava Lady Bears junior varsity and varsity programs opened the season with a tally in both teams’ win column in Tuesday’s double-header on the road.

The Ava varsity squad held the lead through four quarters, Hollister catching up and knotting the match at 26 late in the second. Eventually the Lady Bears would break past the Hollister defense and top them with a final of 65-56.

A pattern of consistency started early in the game with Claire Fossett running a 17-point tally and numerous offensive attempts, keeping the Lady Tiger defense on their heels.

The Tigers did have two aces on the court, long-ball shooters who could hit the net from beyond  the 3-point line. Sophmore Kendrick Bailey contributed 18 for the Tigers with three hits from outside the Lady Bear’s defense while freshman Gabby Franciskovich tossed in another 12 points.

“They have a point guard (Kendrick Bailey) who is legit, is a great player who made a lot of threes on us, but we rebounded the ball well when they missed,” said Houk.

Fouls drawn from the Tigers lead to a bonus situation in the first half and a double bonus in the second half which created a unique 20-point opportunity from returning all-conference senior guard Asthon Bewly.

Bewly shined at the charity stripe, drawing foul-after-foul from the Lady Tigers. Trips to the free-throw line lead to her shooting 12 of 15 and adding another eight in gameplay for a total of 20 on the board against Hollister.

“We work on free throws every practice, we make sure our game plan and game shooters are online,” said Houk.

Hollister caught-on to the Bear’s top scorers but opened another opportunity under the net for center Lauren Mendel. Towering above the Lady Tiger defense at 5-foot 11 inches, Mendel contributed another 15 points, many from under the rim supporting a 12-point run by the Lady Bears in the second half.

“We started feeding her some in the second half and she got some buckets for us that were big. Especially when the game got tied, we were able to get the ball inside to her and she finished it,” said Houk.

Houk didn’t completely know what to expect from the Lady Tigers, adding that they graduated three top shooters last year and had a transfer student on their roster to contend with.

“They have a young, quick, athletic, talented team that are going to be hard to deal with in the future,” said Houk.

The junior varsity squad shared similar success with a 43-29 victory over the JV Lady Tigers, keeping them under ten points allowed in each quarter.

Freshman Lauren Hall delivered 15 points in her high school debut with a dominant fourth quarter when she sunk 11 of her points.

Coach Houk now has an expectation of the feisty freshman who gave up four fouls to the JV Lady Tigers.

“Lauren Hall, good player, she’s going to do a nice job for us,” Houk said. “She runs the point, can shoot, and passes the ball pretty well. She is a pretty good defender.”

Freshman Hallie Smith debuted with 11 points, sinking two each quarter and shooting 3 of 4 at the stripe.

Posts Baylan Alexander and Julia Henry also made a winning debut on the court scoring a combined 8 points through four quarters of play.

Henry was 2 of four at the stripe plus a bucket in the third quarter while Alexander contributed two shots in the first half.