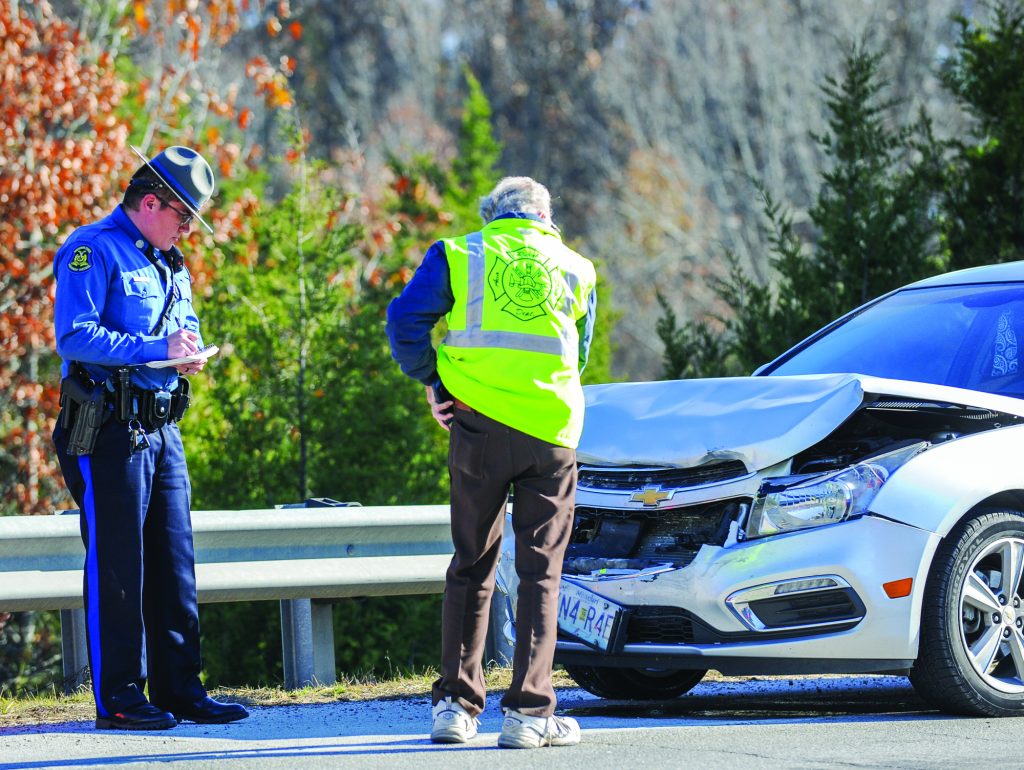 A Missouri State Highway Patrolman surveys the damage to a car involved in a two-vehicle incident on South Highway 5 Tuesday, near Ava.

In Douglas County, seven lives were lost on the roads through November 27. This is an increase of three from the previous year.

In total, there were 142 vehicle-related instances in the county of  approximately 13,300 residents. Eight of the collisions occurred within the Ava City Limits, one of those claiming a life.

While the majority of vehicle incidents occur in non-municipal areas, the Ava Police Department was called to six accidents in-town, one of which produced a fatality along Highway 5 and Springfield Road.

Of the 7 dead, two deaths were in reports which indicated alcohol use as a contributing factor for the incident.

Drivers can help authorities locate and stop suspected drivers who appear to be driving under the influence by calling *55 on their phones.

The hotline will connect them with a highway patrol dispatcher who will assist with the report.

“If you feel like you see an impaired driver, call the highway patrol to report it,” said Drummond.

So far in 2018, eight cases of driving under the influence of drugs or alcohol have been handled by Troop G of the highway patrol in Douglas County.

With colder temperatures and winter weather making an early appearance this year, driving to weather conditions is important.

31 cases attributed to “driving too fast for conditions” were reported by the MSHP in 2018. One of those incidents were fatal.

16 of those reports occurred during the winter months, a time when low temperatures and weather can create challenging conditions for drivers.

Crews require time to clear and treat roadways during instances of snow. The process itself can cause delays or congestion.

“People should slow down and leave plenty of time for travel,” said Drummond. “We encourage drivers to stay off the roads.”

On January 31, one report indicated an instance of over-correcting and leaving the roadway, killing the driver.

Other fatal accidents were attributed to fatigue or driver error.

Wednesday came in second with total crashes at 22.