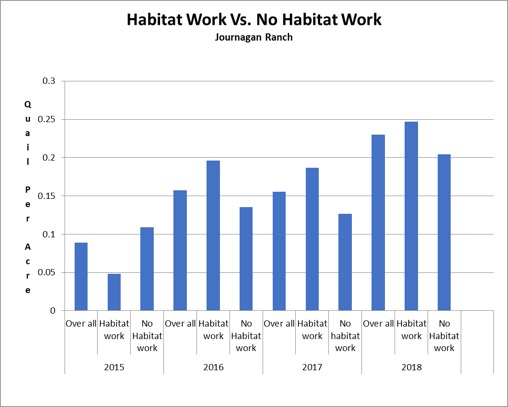 Have you ever wondered where the bobwhite quail have gone? These small game birds were once very common in the Ozarks. So common in fact that they had quite a large following of hunters each November, with their dogs and guns, pursuing this popular game bird. But over the years the quail numbers have become less and less to the point now where some people don’t even associate bobwhite quail with the Ozarks at all.

Each Fall I ask my MSU students if they can describe what a bobwhite quail looks like or sounds like. A few each year can describe them but very few have ever had the privilege of hunting this once popular game bird.

Bobwhite quail are a bird of the edge habitat, the area along open fields and brushy timber. They like areas that have recently been disturbed or tilled.

At one point 50 or 60 years ago the Ozarks land was being converted from timber to pasture at a rapid rate. These newly established pastures provided early successional habitat ideal for bobwhite quail. The associated brushy areas also provided very important escape cover for these ground dwelling birds. The Ozark glades and associated open woodlands also provided ideal habitat.

Over time these new pastures became established into pure stands of sod forming cool-season grasses that are less than ideal for these birds. The glades and woodlands have closed in and matured into closed canopy forest like stands that also offer very little in the form of habitat for the bobwhite quail.

What can I do?

To help answer this question we established a conservation project on the Journagan Ranch to focus on the establishment on many different conservation wildlife practices. These practices are designed to be wildlife friendly while fitting into the major land use of South-Central Missouri, beef cattle production.

The Conservation Project is a cooperative effort between the Missouri Department of Conservation (MDC) and Missouri State University (MSU). This is the fifth year of this project and we are starting to see the results.

Conservation/wildlife practices used in this project include:

In this project bobwhite quail population numbers are used as one of the measurements of success. Each year students from Missouri State University College of Agriculture travel to Journagan Ranch to listen and count the bobwhite quail fall covey whistle. Bobwhite quail tend to whistle 25 minutes before sunrise, mainly in the fall of the year on crisp clear mornings. Starting in September, peaking in October and early November, then fading away as mid-December approaches.

The results of these fall quail covey counts put through a formula that determines the actual number of bobwhite quail on this property.

One of the management practices we have incorporated into this project is the establishment of native warm season grass. These grasses are the same types and varieties that have grown here in the Ozarks for ages. Grass of these varieties also provide outstanding bobwhite quail habitat.

As hot and dry as it was this past summer, most pastures in the Ozarks were completely burned up by the summer heat. But on this native grass pasture the grass was green and the cattle had plenty to eat. Each cow consumed 20.06 pounds of dry matter per day of the native warm season forage. The total dry matter removed from this 34-acre field was 47,762.86 pounds of dry matter or 1,404.79 pounds per acre. During a period that most pastures in the Ozarks had gone dormant.

By establishing native warm season grasses on your farm along with these other quail friendly activities you not only can increase the production of your cattle operation, but you can also provide for the bobwhite quail as well.

This graph displays the overall quail population from the four years of 2015 through 2018. Displayed here are the overall population figures as well as populations from the areas where we have concentrated habitat work and areas where there has been no habitat work. We prioritized areas needing habitat work according to two factors. One being; where it was most needed. Two being; where we could do habitat work. The results show that quail numbers have increased to five times the original number in areas where management practices were applied verses slightly over two times where no management work was done. All areas have shown increases, but the greatest is where management has been applied to the landscape. 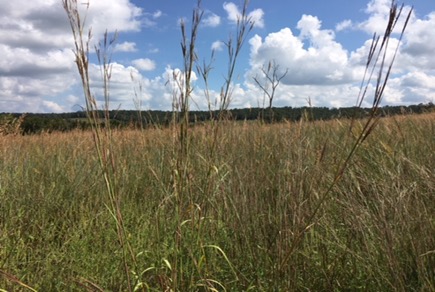 This is a native warm season grass planting in the second year of growth. The field was included in three grazing rotations the year of this picture, then rested for regrowth and burned the following spring. The third year it was again grazed three rotations. The grass mix on this site is big bluestem, little bluestem, Indian grass, side oats gramma, and broom sedge. Plans include incorporating native forbs and legumes in this stand. 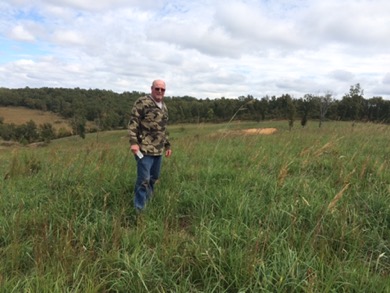 This planting has been included in grazing rotations for the past 3 years. In 2018 it was grazed over a period of 70 days from July 9 through Sept. 16. The cattle that grazed the pasture this past summer were young Hereford cattle averaging 1003 pounds each. This grazing equaled 2,381 animal unit (AU) grazing days.  This picture was taken Sept. 15, 2015, the year this native warm season grass was established. This pasture was not grazed the establishment year but has been included in the grazing rotations each grazing season since. Livestock grazing started each year when the grass reached a height of 14 to 20 inches, usually early July. 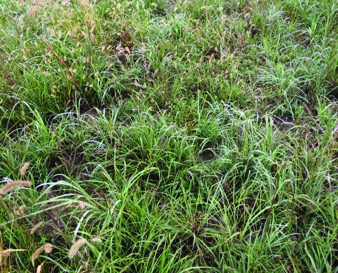 The native warm season grasses remained in a growing, green vegetative condition. This feed was harvested by the cows grazing freely over the pasture. Adding additional livestock water to these sites increase grazing efficacy and utilization. This picture was taken on Oct. 1, 2018 after 14 days rest and regrowth of the native grass. This picture was of an area of pasture that was grazed short to the ground. It has regained a height of approximately 12 inches.  Fall rains have allowed for regrowth. Plans for this pasture include an early spring burn to help invigorate the native warm season grass.