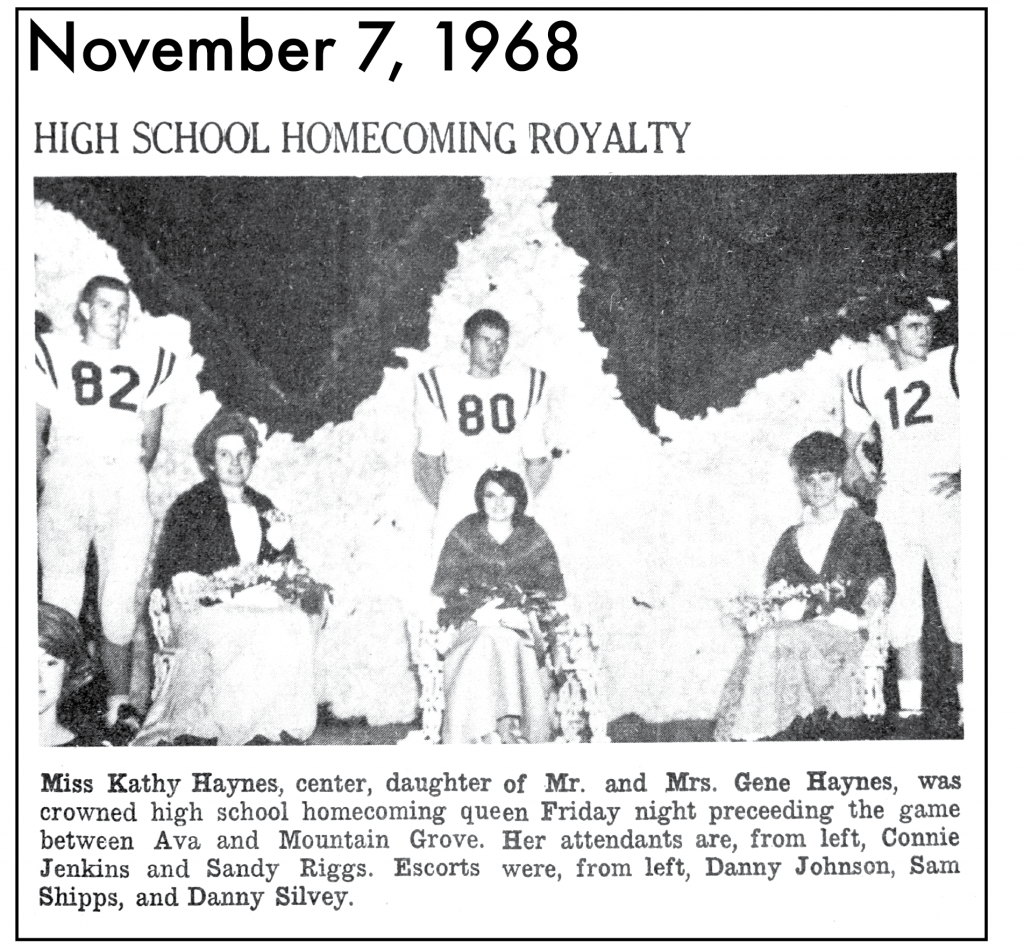 Ava High School’s presentation of “Bye Bye Birdie” was held last Friday night.  The musical was given by the music and drama departments of Ava High School, and featured more than 40 students, as well as some adult actors and a large technical crew, and live music by a pit band.  The play was directed by Jon Scott Turner.

Will and Clara Havens, Ava, will observe their 60th wedding anniversary Dec. 2.

Coach Mark Wendler’s Ava Lady Bears opened the 1993-94 hardwood campaign on a winning note Monday night at Forsyth, hammering the Lady Panthers, 79-40.  Ava was led in scoring by junior Tobi Stover who had 21 points and five assists in just three quarters of play. Stover was 5-for-5 from the free throw line.

A big surprise for L.P. “Shorty” Robertson was held Sunday, Nov. 14 at the home of his daughter, Dede and Bill Arington’s.  After church he was greeted with a large family gathering, lots of food and a big cake for his 81st birthday.

SMALLETT –– Visiting Mr. and Mrs. Adrain Owens and family Monday were Cordia Pruiett from Ava and son, Thetis from Texas.

Three local juveniles were taken into custody last Wednesday night in Mtn. Home, Ark., after allegedly breaking and entering four Ava business firms and taking an automobile. A 12-year-old boy in the company of two other juveniles, ages 14 and 15, are accused of breaking and entering the Ava Lumber Company Nov. 5 and taking a 1959 Volkswagon belonging to R.A. Kottmeier.  The youths are also charged with entering the Ava Farmers Exchange, Ava Pool Hall and Pool’s Service Station where they reportedly took an undetermined amount of money, candy and cigarettes.

Harry Wiliams, a volunteer leader for scouting in Ava for the past six years, has been appointed to a new position in scouting.  Chris Mathes, district scout executive announced today that Mr. Williams will be serving as neighborhood commissioner for the Ava area.

A dance will be held at the Ava Country Club Saturday, Nov. 23 at 8 p.m.  Members may bring guests.

Miss Pamela Kay Klineline, daughter of Mr. and Mrs. Pete Klineline of Gainesville, recently completed training as an airline hostess for Braniff International and has been assigned to the airline’s flight crew base at Kansas City.

GENTRY –– Archie Mahan was in Springfield Monday to have the stitches removed from his finger which he had operated on last week.  His father, Bill Mahan, and his son, David, accompanied him.

Miss Betty Curnutt, daughter of Mr. and Mrs. Fred Curnutt, 411 NE 3rd Street, who is an elementary education major in Southwest Baptist College in Bolivar, began the student teaching phase of her work in the Camdenton Elementary School Monday, Nov. 4.

GOODHOPE –– Mr. and Mrs. Corbin Mathews drove to Branson Sunday and visited with their daughter and family, Mr. and Mrs. Charley Campbell and girls.

STAR –– Miss Martha Briscoe, a  senior at SMS, spent the weekend with her parents, Mr. and Mrs. C.W. Briscoe, of near Squires.

A report from Lake Taneycomo indicates that the slow period for trout fishing is over and the big ones are hitting.

Allied troops battling the Nazis in Italy met reverses this week, with the coming of winter weather and with a well trained, well disciplined enemy entrenched in strong points of solid rock in numbers said to be greater than the Germans have previously congregated along a single front in this theater.

Floyd Brazeal, 19, son of Walter Brazeal, Ava Route 1, recently reported missing at sea, is now on the way home for a visit, according to information received by  his father this week.  Floyd landed in Brooklyn, New York, on Nov. 10, and immediately called his sister, Mrs. Golda Cameron at Miller, Mo., to inform her he had just arrived safely back in the States and that he would be at home in a few days. In September, Mrs. Cameron received a telegram that Floyd’s ship had been torpedoed, and about the same time in September she received his combat bar.

A son was born November 2 to Lieutenant and Mrs. Fred F. Schudy of Houston, Texas, formerly of Ava. The boy has been named George Frederick. Lieutenant Schudy, an Army dentist, is stationed at San Antonio, Texas, but was in Houston at the birth of his son.

ROY –– Mr. and Mrs. Venie Ellison are the parents of a baby boy.

Alvin Spurrier, younger son of Mr. and Mrs. W.A. Spurrier of Ava left the family home Thursday last week enroute to St. Louis where he reported to the Naval recruiting office. After taking the Navy oath he left for Farragut, Idaho where he is to take his naval basic training. Corporal Elmer Spurrier of Camp Ellis was in Ava Friday night and was an overnight guest of his parents, Mr. and Mrs. W.A. Spurrier.

DRURY –– Ivy Hutchison and Dock Shannon have been working roads in this vicinity the past week.

PFC J. D. Ridenour of Camp Adair, Oregon, came in Friday for a 16-day furlough with his wife and parents, Mr. and Mrs. Dorson Ridenour and son, Louis Allen.  J. D. has been in the Army a year this November and this is his first trip home.  Like all typical American boys, he too likes the Army.

VANZANT –– Mr. and Mrs. Lon Penner and family and Mrs. Faye Davis were dinner guests Sunday in the home of Mr. and Mrs. Niten Reece.

On account of the epidemic of influenza we have received authority to extend the campaign for the United War Work Fund in this county until December 1.

Sheriff Wm. Miller was prohibited from carrying out an order of the County Court to erect a wood house in the courthouse square in Ava by the city authorities last Monday. The city officials acted upon an ordinance which has been in effect for sometime, which prohibits the erection of wooden structures on or within two blocks of the public square. The city ordinance was enacted after several destructive fires on and near the public square, and as a means of preventing further danger from fire.

A nation-wide “Victory Sing” in every city, town and hamlet all over our nation at 4:00 o’clock on Thanksgiving afternoon, is to be carried out under the direction of the Women’s Committee Council of National Defense.

The Senate today adopted the conference report on the war time prohibition bill, which goes to President Wilson. The prohibition measure makes the entire country bone dry after July 1, 1919. This prohibition lasts until all American troops have been demobilized.  Prohibition forces say that by the time the demobilization is finished the constitutional amendment making the country dry will have been ratified by the necessary number of states to make prohibition in the United States permanent.

Marriage licenses were issued this week to Jasper F. Turner to Hattie Phillips, both of Roy.

A card to Mrs. Boone Norman of Ava states that her husband has arrived safely overseas.

Mrs. Carl Mays of Bryant has gone to St. Louis, to join her husband, who is in the Washington University Corps of the Army. Mays volunteered under a call for men for special training and together with five other Douglas County boys was entrained by the Local Board from Ava.

Mr. and Mrs. Ed Hartley of Arno are the proud parents of a baby boy who arrived at their home on Saturday night of last week.

John Gunnels of Roy, died last Saturday from an attack of influenza.  His wife died only a few week previous. They leave three children.

Ava is to have a broom factory. This broom factory will probably start as our canning started here in a small way, but all farmers who will raise broom corn in 1919 will have a market for it right here in Ava.  The new firm will be composed of Carl Hitchcock and father and will do business under the name of “The Ava Broom Corn Co.”

Bank of Ava To Our Customers- We have been ordered by the Bank Commissioner to discontinue the allowing of customers to overdraw their accounts.

The new submarine torpedo boat built by Richard Radatz was given a successful trial at Oshkosh, Wis.  The boat is 40 ft. long and propelled and lighted by electricity. The boat carried three men and remained under water nearly an hour, under perfect control.

The Navy department expects to soon issue a circular calling upon inventors to submit designs for the new, small-bore rifle which is to replace the arms at present in use in the service.

Edward Thomas was given $1,500 damages at Liberty, Mo., against the Wabash for being knocked down and ejected by the conductor.

There is an influx of North Carolinians in Wright County.

‘Possum suppers have been inaugurated in Southwester Missouri.

Somebody has counted up 49 men killed in Taney County since the war.

George R. Smith College for colored people will be completed January 1, and Sedalia will celebrate.

The Supreme Court of Missouri has decided that in the Christian denomination it is the elders who decide about the employment of pastors.

December and September were recently wed in Ray County, with the sprightly groom being 75 years of age while the bride confessed to 50.

A. J. Blackwell, who once built an opera house in Joplin with $1.50 in good money, has established a town in the territory.  He calls it Blackwell and it is booming.

The Mayor of St. Louis has announced that he will issue no more permits allowing people to carry concealed weapons, claiming there is no need for a law abiding citizen to carry a revolver.

A commutation of sentence has been granted Charles Schroeder, who was sentenced to the penitentiary for ten years for stealing while drunk an overcoat and pocketbook containing $1.50. It will be only eight years now.

The citizens of Mansfield held a mass meeting last week and passed resolution in favor of a town ordinance prohibiting the erection of frame building on the public square. The recent conflagration has taught them a lesson which was too expensive to have repeated.  The recent fire at Mansfield caused a loss of $16,000.  The fire started from a defective flue which the town authorities had examined and condemned but the owner of it failed to repair the defect. Ava has two or three fire traps which should receive immediate attention.  It is worse than careless to wait until the town is burned up before taking the necessary action.

An item of news almost more significant than the concession of a woman suffrage in New Zealand is this, that a lady, a lady on the right side of forty, too, has been appointed colonial editor of the London Times.

A woman in Ohio has just received her degree as an electrical engineer. She ought by mere force of instinct, know how to manage the sparks.