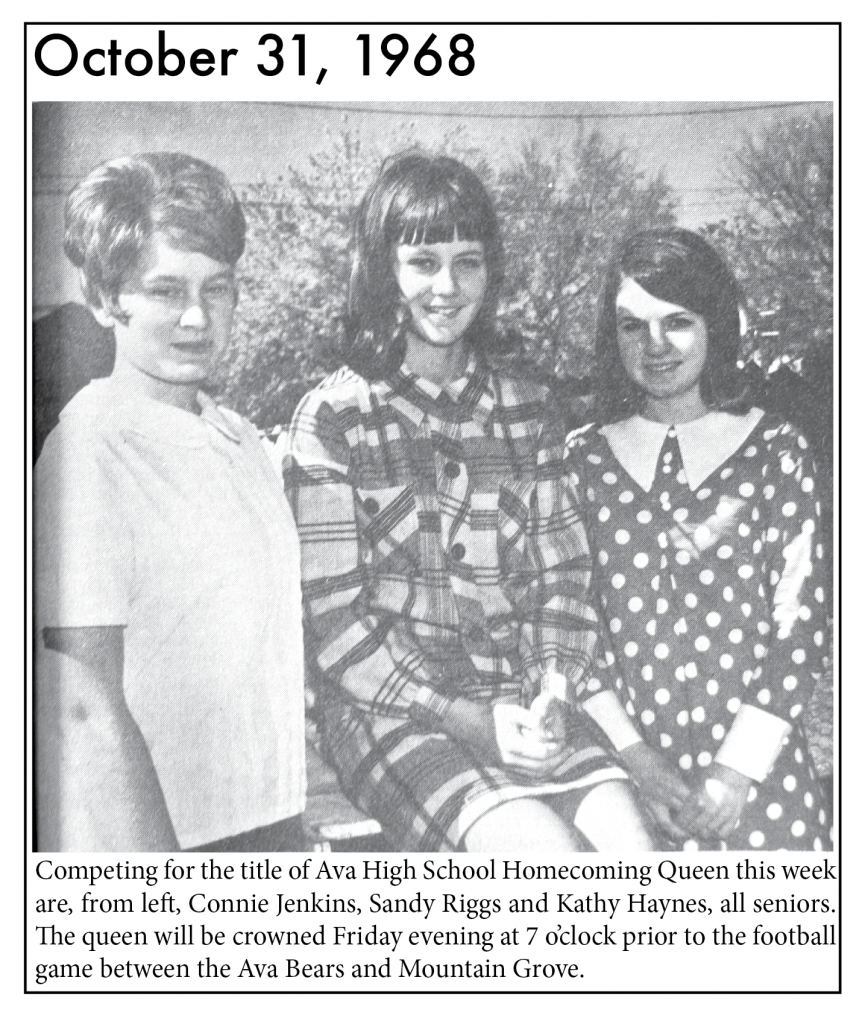 Natsha Gunkel celebrated her third birthday in the home of Mr. and Mrs. Delmer Caudill, of Ava, on Saturday, Oct. 30.

Basil and Betty Spurlock returned to their home at Squires Monday this week after a visit with relatives and friends in Texas. They visited his son, CM/Sgt. Mike and Barbara Spurlock and Michael Spurlock II.

The Bolivar Liberators defeated the Ava High School Bears 26-0 here last Wednesday night in the first round of the Missouri 3A state playoffs.  According to Ava’s statistics, Bolivar racked up 296 rushing yards while holding Ava to 80 yards on the ground and nine yards through the air. 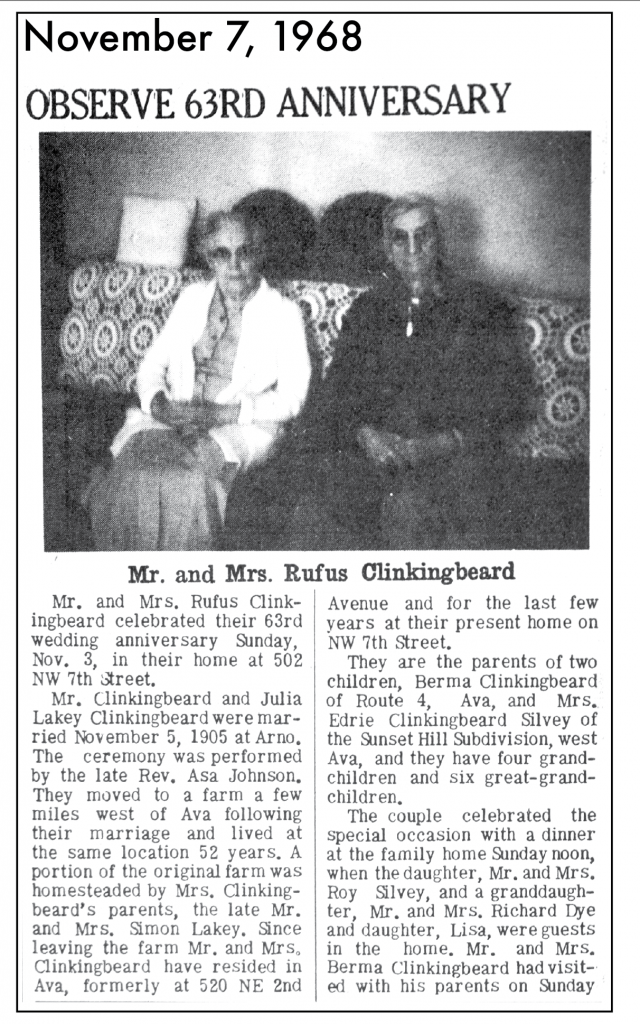 Trooper Keith Jones of the Missouri State Highway Patrol visited Ava Head Start last week and talked to the students about his job, the equipment he uses, and how he helps people.

Hortense Gentry was honored with a noon dinner Sunday, Nov. 14 at the Village Inn to celebrate her 80th birthday.

Dana Smith is Skyline School’s volunteer of the month.

In Douglas County, a total of 3.960 persons cast ballots for president and vice president with 2,663 votes going to the Republican nominees and 923 to the Democratic hopefuls.  Third party candidate George Wallace recorded 374 votes in the county.

A plat of the Cooper Addition located north of Rainbow Ridge to the City of Ava was approved recently in a special meeting of the City Council.

Receiving the highest number of write-in votes for a county office was Wilma Fish with an unofficial total of 91 votes for public administrator.

New quarters have been constructed here for the Safe-Buy Real Estate Agency located just east of the Highway 4-14 junction. The firm is operated by Mr. and Mrs. A.J. Roberts of Ava.

Mr. and Mrs. Ted Sallee of the Sallee Insurance Service here have purchased the former Dr. Taylor Woods veterinary clinic property and residence. The Sallees plan to open their business in the new location on Tuesday, Nov. 12. They are also moving their residence to the new property.

“Hey, Where can I buy a good bird dog?” The word is out that “we’ve really got the birds.” The outlook is bright for a wonderful quail season in Missouri.

The Ava High Bears upset the Mountain Grove Panthers 7-0 Friday  night to celebrate homecoming and the first Bear victory over the Panthers in 12 years.  A 55-yard pass play from Danny Silvey to Danny Johnson accounted for the touchdown and Jim Huffman kicked the extra point.

Although the work of remodeling the Herald office is not yet completed, the office has moved its business and editorial department into addition space it obtained after the post office moved from the Herald building to the Walker building.  The space formerly occupied by the post office was divided in the remodeling with the east half being occupied by the Ava Telephone Exchange and the west half being taken by the Herald to give it additional floor space. The new space, fronting on the square, now is occupied by the business and editorial departments of the newspaper. Customers are requested to enter the office by the new front door instead of the old door facing the courthouse.

Prime Minister Winston Churchill of Great Britain was quoted by the Associated Press Tuesday as asserting that the war campaigns of 1944 might surpass the tragedies of Waterloo and Gettysburg and that “unless some happy event occurs, on which we have no right to count, 1944 will see the greatest sacrifice of the British and United States armies.”

County Treasurer Arthur Singleton has received $7,052.03 in foreign insurance money from the state to be used in this county for the purchase of school books. The fund has been apportioned among the school district of the county.

Production of all types of aircraft reached a new high of 8,362 planes in October, including the largest number of heavy bombers ever produced in a single month.

Miss Elaine Reese, clerk for the federal bureau of investigation in Washington, D.C. is spending a two weeks vacation with her parents, Mr. and Mrs. A.R.D. Reese who live in Forsyth. Miss Reese is a graduate of Ava High School and plans to come to Ava for a visit with friends before returning to Washington.

MT. TABOR –– Old Man Winter appeared Sunday night leaving by Monday night a blanket of snow over this section of the Ozarks.

DOGWOOD –– The pie supper held at Dogwood Nov. 3 was well attended.  Proceeds which go for the war chest fund were a little over $70.

ARNO –– Mr. and Mrs. Everett Posey are the parents of a baby girl born Sunday. She has been named Judy Kay.

The Great War Ended Monday – Armistice terms signed by Germany at midnight last Sunday and German Kaiser flees to Holland –– The allied armistice terms were signed by Germany at midnight Sunday Nov. 10, according to official announcement from Washington. Hostilities ceased at 11 o’clock a.m. Monday, Paris time. The Associated Press verifies the report that Emperor William of Germany has fled to Holland and that practically all Germany is in a state of revolution; and that the Socialists are in charge and are attempting to set up a new government.

One hundred and forty-five drafted men, the largest draft quota from Douglas County since the beginning of the war, were released to return to their homes after reaching Mansfield on the way to Kelley Field, San Antonio, Texas, last Monday.

Amendment No. Six (prohibition amendment) was defeated in Douglas County by 15 votes. The totals are: for prohibition 785; against prohibition, 800.  All of the other amendments were defeated by large majorities.

Ava celebrated the premature peace report on Thursday evening of last week as did all towns and cities in the United States. All the bells and whistles in Ava were brought into use and the supply of ammunition at the hardware stores were entirely exhausted before the noise ceased at about nine o’clock in the evening. A large bonfire was lighted on the public square shortly after dark and was kept going until the celebration ceased.

A ll will be welcome,

P ray don’t be tardy, but

B oth friendly and hearty;

T o the alphabet party given by the Epworth League at M.E. Church, Nov. 20th, 7:30 o’clock. Admission one cent for each letter of the alphabet that does not appear in your name. This to include only first and last names.

Roscoe Spurlock and Roland Kerr were seriously injured while “shooting the anvils” during the celebration in Ava last Thursday night. The powder loading to the anvils was accidentally ignited as they were lighting the fuse and an explosion occurred instantly. Both boys were seriously burned about the face and arms and it was thought for a while that their eyesight was affected. They are recovering very nicely, however, and were not as seriously hurt as first reported.

It seems a little strange that news of the cessation of a foreign war should start a war at home, but Willow Springs, Mo. is something of a scrapping place and that is what happened here on Thursday afternoon. When the premature news of the cessation of hostilities in Europe reached Willow, big bonfire was built and the questionable sport of burning hats began. When someone grabbed the town marshals hat, that official swatted the grabber with his billy and in a few minutes a free for all fight was raging, which was still on when the afternoon passenger train came through.  Passengers reported many cases of bloody noses, black eyes and bruised heads.

WASHINGTON, Nov. 11 –– A letter addressed to President Cleveland by Secretary Gresham, on October 18, has been given out for publication. The secretary reviews in detail the acts leading up to the revolution in Hawaii, in January last, and takes strong grounds in the opinion that Queen Lilliuokalani would never have been deposed had it not been for the landing of United States marines from the United States steamship Boston.

While fully 4,000 people of the very highest society of this city were last night enjoying a performance of the opera “William Tell” in the Licco theater, a magnificent opera house, sometimes classed as the largest theater in Europe, two dynamite bombs were suddenly hurled from the top most gallery into the midst of the stalls on the floor of the house.  Fifteen person were instantly killed, fifteen others have since died and eight persons are in a critical condition.

LITTLE ROCK, Ark. –– The body of the notorious bandit and outlaw, Jasper Gordon, was found hanging to a tree in the Pea Ridge neighborhood. His body was riddled with bullets. It is generally believed he was one of the Iron Mountain train robbers.  Gordon was wanted in several states for murder, arson and burglary.

IMPOSSIBLE TO MATCH –– The deepest artesian well is at Potsdam, 5,900 feet deep.   …   The highest church towers are of the cathedral of Colognie, 511 feet.   …   The tallest stone tower is the Washington monument at Washington, 553 feet.   …   The largest stone bridge is at Taguig, China. It is six miles long and has 600 arches, each 70 ft. high.   …  The largest cave is the Mammoth Cave in Kentucky.  It has been explored for a distance of more than ten miles.

All the babies in Joplin are to be photographed free.

Topaz is in Douglas County; onyx is in several counties.

There are 2,000 licensed dram shops in the city of St. Louis.

Missouri is larger than all of New England with Delaware thrown in.

The fashion of doing away with yard fences is spreading in Missouri towns.

The Missouri hogs exhibited at the World’s Fair are believed to have obliterated the memory of the razor back.

A big persimmon crop, such as we have this year, is said by very old inhabitants to be indicative of a very severe winter.

More than $4,000,000 worth of poultry is exported from Missouri every year, to say nothing of the amount used for home consumption.

When a man’s friends praise him to his wife she looks pleased if a bride.  But if she has been married for some time, she looks suspicious.