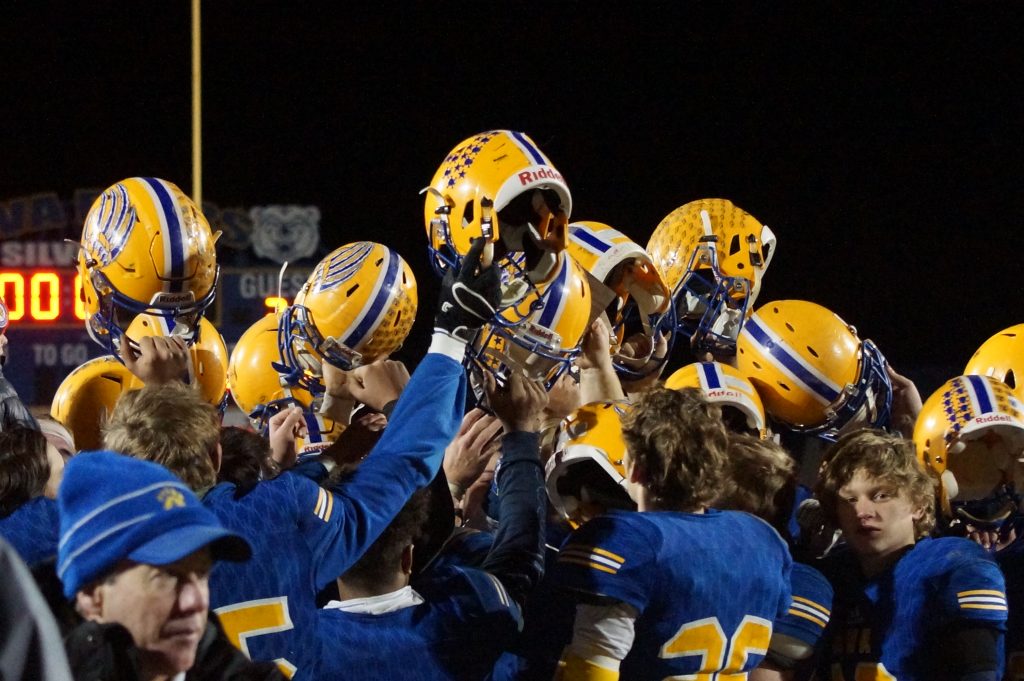 The Bears celebrate after their victory against Fair Grove Friday night. The win gave the Bears the district title and punched their ticket for a matchup against Lamar this Saturday.

Back-to-Back! It is something the Bears are getting used to hearing after they swept the SCA Conference 7-0 in 2017 and 2018. Now they can add the District Championship to that as well after defeating the Fair Grove Eagles Friday night.

Ava won the toss to start the District Championship game but deferred to the second half. The Bears kicker, Stephen Copeland, started the game with an outstanding kickoff allowing the Bears to get down the field and into position for a big hit, causing the Eagles to fumble and turning the ball over to the Bears.

It wouldn’t take long from there for the Bears to score. Caleb Johnson would spring from 37 yards out to get the first points on the board for the Bears with just a minute into the game. Johnson not able to get in for two, leaving the Bears with a 6-0 lead at the 11:00-minute mark of the first quarter.

It didn’t take long for Fair Grove to move the ball down the field and get some numbers on the board themselves. The Eagles were able to inch their way down the field by putting the ball in the air. The Eagles sealed the deal with a 3 yard run at the 9:29 mark of the first quarter.  A completed two-point conversion puts Fair Grove over Ava 8-6.

The Eagles couldn’t find a way to stop Kayden Myers and the Bears. Less than two minutes after the Eagles score, Ava answered back with a 12 yard run by Myers. The Bears, though, were unable to get the ball in for two, leaving the Bears up over Fair Grove 12-8 at the 7:36 mark of the first quarter.

Just minutes into the first quarter its beginning to look like it will be a race to see who has the last possession to win the game unless the defense steps up, and that’s exactly what the Bears did. The Eagles, marching down the field on the cusp of scoring again, have their drive stopped as Freshman Spencer Skiles is able to intercept a tipped pass.

The momentum swing toward the Bears doesn’t last for long as on the next play from scrimmage the Bears fumble, giving the ball back to the Eagles.

Fair Grove would find a receiver downfield who, in spite of good coverage from the Bears defense, was able to bring the ball down in the end zone. The Eagles two-point conversion attempt failed, leaving Fair Grove up over Ava 12-14 with 3:28 left in the first quarter.

The Eagles are able to the hold the Bears from scoring their next possession but the Bears aren’t able to do the same. Fair Grove, once again catching a break with a man well covered, able to pull the ball down on a 25-yard pass putting the Eagles inside the 5-yard line. They then score on a 3 yard run with 20 seconds left in the first quarter.

It wouldn’t take long for the Bears to find their way in the end zone, using Kayden Myers and Stephen Copeland to get the ball down to the 1-yard line. Caleb Johnson was able to push through the big line of the Eagles to put six more on the board for Ava. Stephen Copeland is able to fight his way in for the two-point conversion, making it a 20-20 ball game.

It’s looking like the Bears are finally able to get Fair Grove’s offense figured out, as they hold the Eagles and get the ball back and capitalize on the drive. Myers scores from one yard out and takes the point after in for two, putting the Bears up by 8 going into halftime with the score 28-20 Bears.

This season the Bears have shown they are their strongest in the second half of play and Friday night was no different. The Bears came out and work over 6 minutes off the clock in the 3rd quarter, sealing the drive with a score by Myers from two yards out. Stephen Copeland would run it in for two, giving the Bears a two-touchdown lead at the 5:57 mark of the third.

Josh Bray would come up big with a third-down sack to force the Eagles to punt. Caleb Johnson would return the punt for 58 yards all the way to the end zone giving the Bears a 42-20 lead over the Eagles.

Once again the defense of the Bears have it figured out and keep the Eagles to short yardage in the second half. Waylin Moon, with the second sack of the half on third down, forces the Eagles to punt once more.

The next drive for the Bears Nate Swofford ran the ball in from 9 yards out at the 5:53 mark of the fourth quarter. Two point conversion was no good, putting the Bears up 48-20  in the fourth.

The strong defense of the Bears didn’t let up. Spencer Skiles intercepts the ball for the second time in the game and returns it 35 yards for the score for his second pick-six of the season. Nate Swofford runs across the goal line for two, putting the Bears up 56-20.

Coach Swofford and the crew put in the junior varsity to finish off the game. The Eagles were able to score once more with 3:07 left to go in the game but it was far too late to be able to catch Caleb Johnson and the Bears with the final score 56-27 to give the Bears back-to-back District Championship titles.

The Bears will travel to Lamar Saturday with a 1:00pm kick off time. Lamar is trying to defend their 8th straight State title, but with the Bears on an 11 game winning streak they better come to play because I’m sure Coach Swofford will have his young men ready to play.