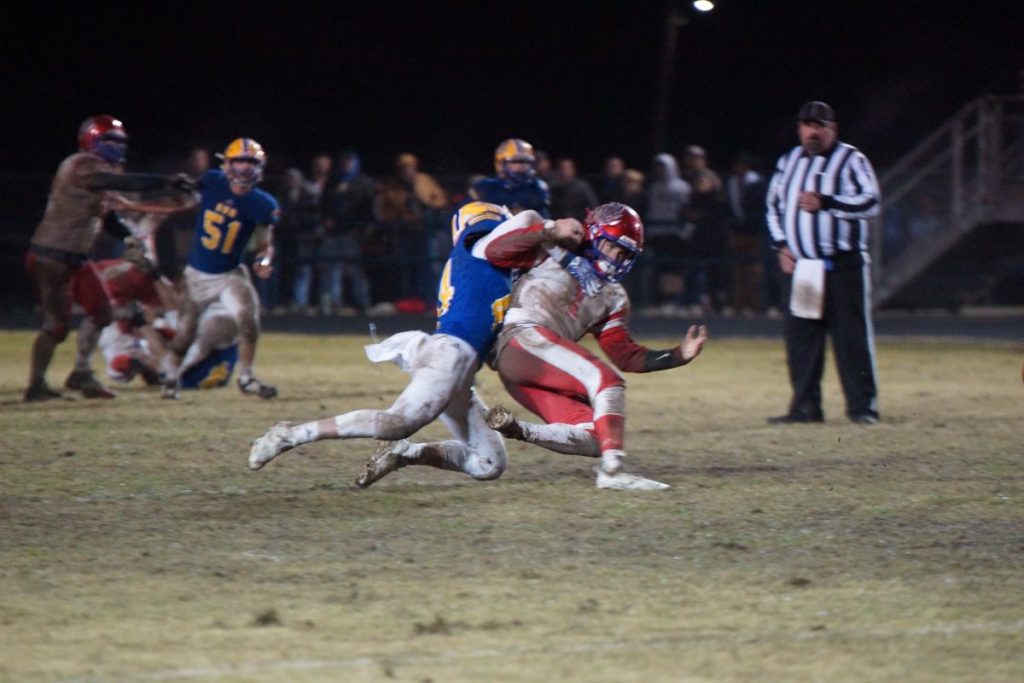 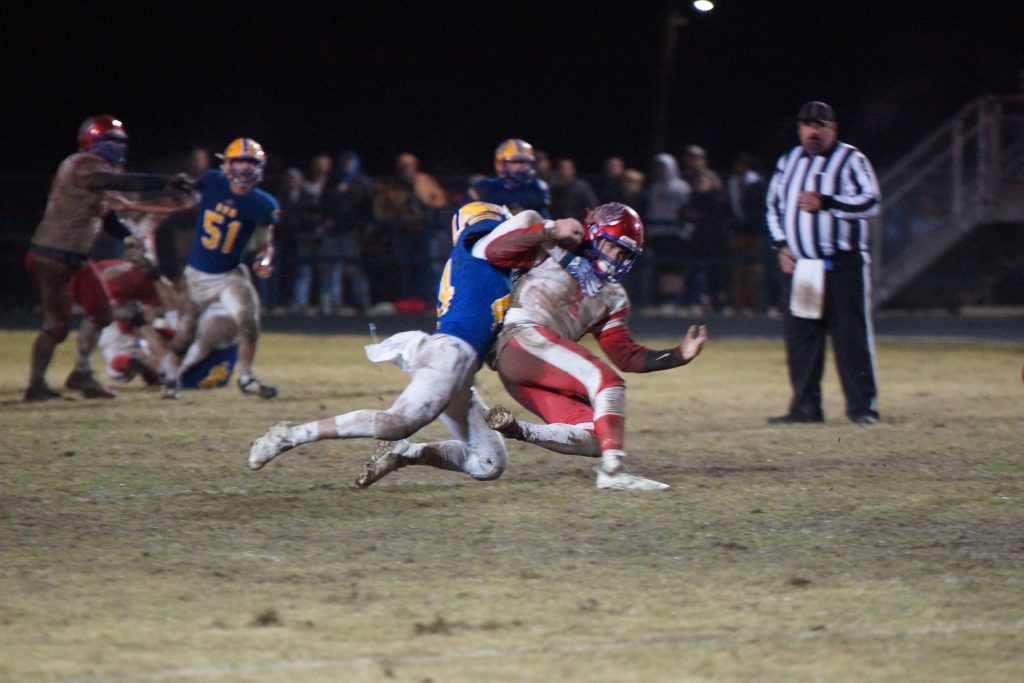 The Bears were challenged for the first time in weeks as the Mtn. View/Liberty Eagles nearly upset the #1 seed in the district semi-final game Friday night.

From the mouth of Coach Dan Swofford “ The Mt. View Eagles will come to Ava ready to play, but so will we.” The Class 2 District XX quarterfinals proved to be the toughest games of the year for the Bears. After a long fought battle and many highs and lows, the Bears were able to pull out the win against a very good Mtn.View team with a strong up and coming quarterback.

The whole first quarter of play on Silvey Field was a defensive battle, the Bears were able to get pressure on Acklin, the star quarterback for the Eagles, keeping him from getting big plays downfield. This is what the Bears worked on all week at practice, they knew they would be spread out across the field and Acklin would try to get the ball into the receivers hands. The Eagles obviously had been working on getting good pursuit to the corners and stopping the running game, holding the Bears to no score in the first quarter. The scoreboard at the end of the first quarter, square at 0, but with the ball in the hands of senior Caleb Johnson to start the second quarter, we knew magic was about to happen. Johnson dumped a pass across mid-field to Kayden Myers who is able to break tackles and takes the ball deep into Eagle territory. Johnson would run the ball in from 10 yards out to get the Bears on the board first with 9:21 left. Kayden Myers would get in for the two-point conversion, putting the Bears up 8-0.

This score wouldn’t last long as the Eagles were finding a way to march down the field. At the 7:28 mark of the second quarter, Acklin found a receiver, in double coverage, for a completion and a score. The Eagles ran it in for two making it an 8-8 ball game.

That wouldn’t stop the Bears from marching down the field on their next possession. Kayden Meyers was able to find some big holes made by Ivec Chittenden up the middle and scored on the strong run from 21 yards out at the 5:15 mark of the second. Caleb Johnson  was not able to get in for two, making it a 14-8 ball game. Zach Mendel, arguably one of the best corners in Class 2 football, was able to make things happen Friday night, as he was able to bring down an interception to keep the momentum for Ava in the second quarter. Coach Swofford, working Myers’ strength up the middle, moved the ball all the way down to Ava’s five-yard line. The Bears are not able to put the ball in the end-zone as the Eagle’s line fought hard denying Ava the score as Caleb Johnson threw an interception on 4th down. From here the Eagles would put together a 96-yard drive culminating with a touchdown on a 30-yard pass by Acklin, with only 11 seconds to go in the half. Josh Bray plowed through the line is able to block the kick, making it a 14-14 ball game going into halftime.

The Eagles would continue to pass the ball on the Bears in the second half, gaining first downs and moving the ball downfield. At the 10 minute mark of the third quarter, Liberty would score again on a run from 20 yards out. Liberty’s kick is good, putting them up on the Bears for the first time in the game, 21-14.

But the Bears would answer right back as they continue to use the “bull in the backfield”, Kayden Myers, to get the ball inside the 10-yard line. Caleb Johnson would then hit Nate Swofford out in the flats and get another 6 points on the board for Ava. Caleb Johnson’s kick is no good, keeping the Eagles in the lead 21-20 at the 4:53 mark of the third quarter.

Liberty would score one more time in the third quarter on a 20-yard pass play, making it a 28-20 ball game.

The Bears would answer back this time as Nate Swofford is able to find a crease up the middle and runs the ball in from 25 yards out. Steven Copeland uses his speed on a huge 2 point conversion to get the ball in the end zone, making it a 28-28 ball game.

This is where the Bears buckle down and get the job done on defense. After a big hit from several of the Bears, causing Liberty to fumble, Dillon King jumps on the ball to give possession to the Bears.

Caleb Johnson would then complete a pass to Steven Copeland, getting the ball down to Ava’s 2-yard line. This would end the third quarter.

Caleb Johnson, from the next play of scrimmage, would run it in from two yards out. Zach Mendel, sacrificing his body, would get the ball across the pylon for the biggest two-point conversion of the year for the Bears. Mendel was not able to finish the game due to a broken shoulder he suffered on the play that put the Bears up 36-28 over the Eagles with 11:56 left in the game.

Steven Copeland was able to make things happen late in the fourth quarter, intercepting the ball and ketpthe Bears in control of this game. The Bears are able to use this drive to burn a lot of time off the clock but unable to get another score on the board.

With only 3 minutes left in the game, the defense of the Bears come up huge and held the Eagles on the biggest fourth down this season.

With less than three minutes left in the game, the Bears needed to keep the ball moving and just get a couple of first downs. That’s exactly what they did. Getting the ball in the hands of Steven Copeland on 4th and 8 proved to be all Ava needed to do to seal the deal, where its win or go home. Ava defeated Mt. View-Liberty 36-28.

Ava will see Fair Grove here at Harlin Stadium Friday night at 7. Come out and support your Ava Bears as they play for their second straight district title.